25 years fall of the Berlin wall

This week-end was the 25th anniversary of the fall of theBerlin wall.
Most of us may remember this day as if it was yesterday - a major
event while people took their own destinity, while an opportunity was created - a breach in the system, in the law, and oppression enforcing.

Over one million people demonstrated in the streets against the system in East berlin. That was about 10% of the german population at the time, reunited in the streets - angry! It ended up with the destroying of the wall.

A great moment in history!

as a reminder, this is how it happened- suddenly - one november night

For the celebrations, they built a wall of lights at the exact same place the brick wall was built - it's a message of hope for people around the world about freedom.


A site to visit:
Berlin site

The wall of shame - then

The wall of hope - yesterday 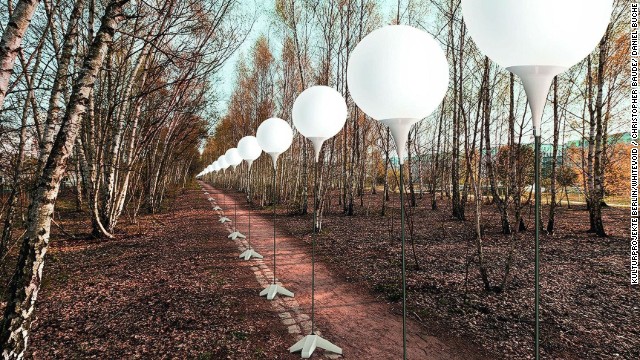 I remember 2 special world events, that occured, when I was a $cientologist - both had skaken me deeply!

I was at the org when the sup told us about it. People were so excited and couldn't even believe it - but we weren't allow to turn on the TV and watch it live. No No No - there was a more important game we were playing that nigh, to save the entire planet and galaxy

So we watched at home, it late at night.

But you can bet, they recycled the Berlin wall event at the next $cientology event to emphasis there was hope for mankind freedom, especially since we are the one to make it happen (we are the authority)

2) the second event was the Iraq attack by the americans

I was schocked - but was with an OT7 at the moment we catched it on the news. Thus I have been ensured that all Oatees would reunited in their secret meetings to postulate peace and handle the war with their powerfull spiritual OTenergy;
I am still waiting - my Oatee friend had gone to 8 and probably is still expecting that something happen with the Oatee power.

Fortunately, all people who read this thread, are either free of $cientology, or not trapped in a way they don't have any acces to the truth.

A great example was this memorable night the wall collapsed

Yes, they are mentioning the 25th Anniversary on the News here in the States, tonight.

My Father flew in the Berlin Air Lift. This of course was before the Berlin Wall was built, I suppose....But USSR was trying to take all of Berlin...and starve its population after WWII..

I have a photograph of my Father at the airfield in Berlin...after one of his runs. I'll have to dig it up someday...

America started the "Berlin Air Lift" and flew needed supplies into the city, at risk of being attacked by Russia....and saved the city of Berlin from being entirely behind a wall....instead of just partially behind a wall...as it turned out.

I suppose that is when Germany was divided into East and West Germany....as was Berlin.

Perhaps others here know more about this period, and can write a bit about it. I believe that Berlin then got divided up into an American Sector, a British Sector...and an East German or Russian Sector....

I'm glad Germany is back together again, and doing well.

The job of the Berlin Wall was to stop people from "blowing" Communism. People who didn't feel like being slaves and having their production stolen from them would risk their lives trying to get across. Over 600 people died in escape attempts.

Meanwhile, Scientology has its own wall to prevent people from fleeing. Yes, it was a great moment in history and the interesting thing, to me at least, is that today it almost stands as though it alone represents the fall of communism and the triumph of the west over them nasty soviets . . .

I suppose it is so symbolic because Berlin is a city of immense history that could have been totally lost had we allies not stood firm immediately after the war.

To me though, and I just read wiki to refresh my memory of the details I remembered of the events of 1988-89 . . . more symbolic and of greater importance were the factors that led up to the breach of the wall that occurred, not only in the USSR with Gorbachev, but importantly and so very bravely in the satellite Eastern Block Iron Curtain countries such as Poland, Hungary, Czechoslovakia, Bulgaria, Romania and the like . . .

These brave souls set the stage that showed the holding of the wall between the peoples of Berlin was a no-win situation for the Soviets . . . and down it came.

Found a couple photos of my Dad...in Berlin.

Don't know if he is in this one...or just took the photo.

These were taken before I was born....

"The Berlin blockade (24 June 1948 – 12 May 1949) was one of the first major international crises of the Cold War. During the multinational occupation of post–World War II Germany, the Soviet Union blocked the Western Allies' railway, road, and canal access to the sectors of Berlin under allied control."

Are you meaning Edgar Cayce ????

Are you meaning Edgar Cayce ????

I remember when the Berlin Wall went down.

It still is the most singular event in my life for importance.

I couldn't believe it.

I also remember when it was built.

After the fall, I thought anything was possible.

And just after that went the Soviet Union.

Anything is possible, good or bad.

I wonder how many Berliners wished they had a sling shot & some rocks when this clod showed up?

I guess he was some sort of pop star in Germany at the time. Then, there's this. Ugh!!!

Sorry, when I hear about the Berlin Wall falling, I think of Scientologists all abuzz back in '89, because of the huge "OT WIN" .

WTFis WRONG with those people? LOL

Conrad was one of my classmates, best friends and football teammates in High school during the mid '60's.

Conrad and his Older brother (2 years) were smuggled out of East Berlin by their parents, guiding them through an underground tunnel that his father helped engineer and dig to the American Sector of West Berlin shortly after the "Wall" went up.

Conrad's Father was a Chemical Engineer and his Mother was a Seamstress and together they built a successful dry cleaning/alterations business in our small town. They came to our town because they were "Sponsored" by my Uncle (a Farmer/Rancher) that had served as a Tank Company Commander (Silver Star, Bronze Star, 2 Purple Hearts) in the 3rd Army under General Patton.

I was so thankful that I never had to live what Conrad had to go through...Conrad was just grateful, thrilled, unsure but wanting to "belong" to be here--even if he spoke with a German accent. Conrad was a good, cheerful and cherished friend. His Parents were good folks and were very kind and accepting to me. Conrad's mother spoke very little English but her cheerful smile (and scratch made pastries) always "Spoke" to me. Conrad, his father and older brother had "thick" accents.

The summer following Graduation, Conrad's parent's bought out a 3 location dry cleaning business in a large town 100 miles away, where Conrad's older brother was a Junior on full scholarship in the Mechanical Engineering School at a State Technical University.

Conrad went on to earn a BBA, took over the family dry cleaning business and built it to a small "chain". His older brother had a long career as a Mechanical Engineer for Bell Helicopters.

There were many "Conrads" and his older brother, father and mother that died trying to escape East Germany.

The US, and this World, is soooo much better for the "Conrad's" and his parents.

EDIT PS: I'm still amazed that the Berlin Wall fell within my lifetime.
Last edited: Nov 10, 2014
You must log in or register to reply here.