I haven't logged in here for ages, but finally remembered my password by chance. I can't figure out how to search this new revised forum. This should probably be added to an existing thread somewhere, but sorry I really don't know where to put it.

Anyway, due to Katie Holmes concerns about Suri getting "drafted" into the Sea Org at 6 years of age, I'll repost this old stuff here that I posted on WWP ages ago. I've been re-posting stuff anonymously over on WWP, hope that's not a concern here.

My brain's a bit fuzzy these days, but I have posted this information so many times, I hope that FINALLY main stream media will pay attention to these underage justification dox. Hope the formatting works...

He says children have not been allowed to join the Sea Org for more than 20 years, however the ABC's Four Corners investigation found members have been recruited and separated from their families from the age of 14 since then.

Cyrus Brooks is lying. Here is documented proof of children joining the Sea Org less than 20 years ago.

Rev. Carnahan, in the above letter, does not offer any details about the
beneficiary's job title, duties, or work hours (although he repeatedly adds the
title "Reverend" to the beneficiary's name). He does, however, offer
more information in a sworn affidavit:

[The beneficiary] . . . has been a staff member of the [petitioning church] since
March 2000.
. . .
In 1993, [the beneficiary] joined the fraternity of the [Sea Org] and began
working full time for the Church in Canada. He took on a position as the
Community Relations Director responsible for creating a favorable public
relations atmosphere in the neighborhoods surrounding the Church premises.

We interject, here, the observation that the beneficiary was ten years old in
1993. [Redacted] does not offer any details about the duties of the Community
Relations Director, the credentials required for the such a position would be
consistent with the educational schedule of a ten-year-old child.

The petitioner has submitted documentation showing that it allows children
of kindergarten age to sign a billion-year Contract with the Sea Org; we are
not obliged to ignore this information merely because the beneficiary signed his
Contract more than two years before the filing date. Whether the beneficiary
had been a member for a week or for fifty years, the circumstances under which
he first signed the Contract are relevant when considering the nature of the
organization. The two-year requirement does not, in any way, restrict
reasonable inquiry into the underlying nature of the organization.

Counsel maintains that the beneficiary's joining the Sea Org at such a young
age "is excellent evidence of the calling to religious life contemplated by 8
C.F.R. § 204.5(m)(2)." This argument would be persuasive only if six-year-old
children routinely made reliable predictions about their ultimate careers. There
is no evidence that very young children (who are especially impressionable,
particularly when a parent is a church official) sign the Sea Org Contract under
different circumstances than adults, who have given mature reflection to the
nature of a permanent commitment.

The beneficiary, born in 1978, was only fifteen years old when she
signed a "Contract of Employment" (Contract) with the Sea Org in 1993.

The Contract reads, in its entirety:

I, ______________________DO HEREBY AGREE to enter into employment with
the SEA ORGANIZATION and, being of sound mind, do fully realize and agree to
abide by its purpose which is to get ETHICS IN this PLANET AND UNIVERSE and,
fully and without reservation, subscribe to the discipline, mores and conditions
of this group and pledge to abide by them.

THEREFORE, I CONTRACT MYSELF TO THE [DELETED] FOR THE NEXT BILLION
YEARS.
(As per Flag Order 232)

This US Government document is from 2005:

In SRC [redacted] the alien signed the contract at the age of fifteen, and
the petitioner submitted a publication entitled "The [Sea Org]: The Religious
Order of the Church of Scientology," which states: "There is no age limit for
joining the [Sea Org] . . . But there are restrictions for signing a declaration or
contract with the local churches. If a person is under the legal age limit of the
country he must get full parental agreement and meet any employment laws of
the land."

We note that the beneficiary was fifteen years old when she joined
the Sea Org in 1994. By the date of filing in 1999, however, the beneficiary
was twenty years old, an age that does not raise concerns about compliance
with federal, state, and local laws governing child labor (such as the Fair Labor
Standards Act). Such questions would likely arise in instances where the
beneficiary is, as of the filing date, too young to work legally.

In a supplement to the appeal, the petitioner submits copies of various
church documents. One document, dated February 23, 1994, indicates that the
beneficiary passed the Fitness Board. Another document, dated August 2,
1998, reaffirms this finding of fitness. This indicates that the beneficiary was a
full member of the Sea Org for more than nine years prior to the petition's March
2003 filing date.

The beneficiary was ten years old when he became a full Sea Org member. 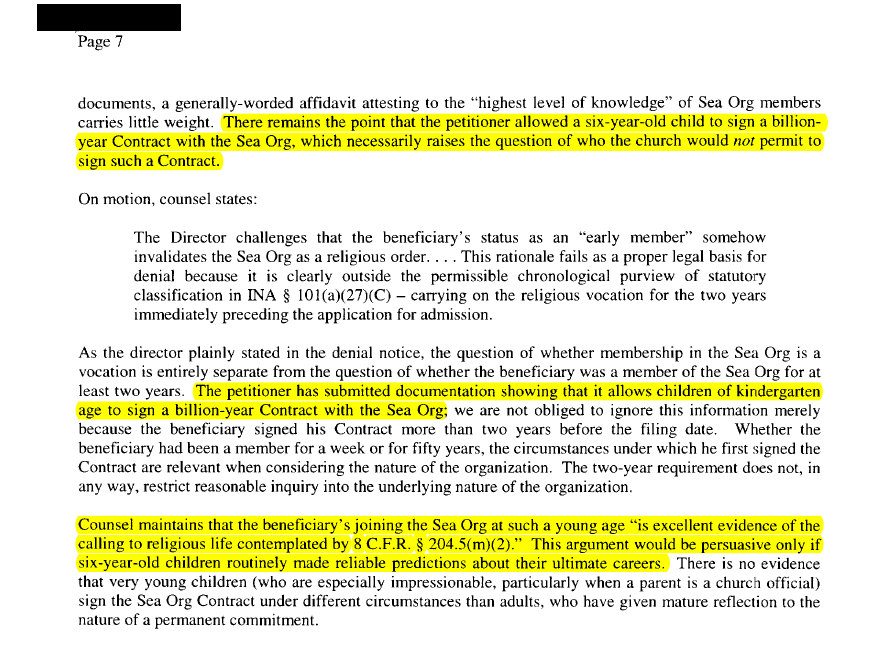 PS, link in my Sig is NOT mine, I'm just a lowly contributor.

Feels like old times, I'm replying to my own thread again.
Good times.

6 still seems to be the magic age for abuse in the Sea Org.

Although Scientologists deny there is any wrongdoing in relation to the group, there have been numerous reports stating that conditions for children within the organization — who, according to the Scientology website, are made to sign "a one-billion-year pledge to symbolize their eternal commitment to the religion" — are less than optimal. "Crash" screenwriter/director Haggis, who was a member of the church, has said that allegations of abuse of the children were partially behind the reason he left Scientology after 34 years. In a 26-page article in The New Yorker, he said he heard about horror stories from men and women who joined Sea Org before turning 18. “They were 10 years old, 12 years old, signing billion-year contracts — and their parents go along with this?” Haggis said. “Scrubbing pots, manual labor — that so deeply touched me. My God, it horrified me!” In the same article, a former employee claimed to have worked 15-hour days as a teenager, seeing her parents only two times between the ages of 12 and 18. Another said he earned $17 a week for his work, and resided in living quarters that were so lacking that his room didn't even have a door knob.

Outside of that, the website Ex-Scientology Kids, which was started by three women who had grown up in the church but later left, has a forum where many people share stories of mistreatment. Additionally, in 2010, a former Scientologist named Keryn (she didn't disclose her last name) went public with her story, claiming she was a "child slave" for Sea Org in the 1960s. Her mother was a high-ranking Scientologist and at the age of 12 Keryn started working on one of the church's ships, where the church's elite followers stay and study, before her grandmother helped her escape at the age of 13. "When we were on the ship, we had people working 20 hours a day, seven days a week," she told Australia's ABC News. "A lot of the children hadn't seen their parents for months, and their parents were on the same ship." She also alleges that she saw a 6-year-old boy chained up by the leg in a ship's hold for days. "He was fed, but he was chained," she said.

Thanx and welcome back - media will be given links to this.

I love the internetz!

Lol I'm a limp dick. Been posting this crap online for too many years. No results so far. Roughly 10k posts online via umpteen socks. RUN KATIE RUN and FUCK THE CULT

Good to have you back, Thank you so much for starting this thread, I have linked it to my blog, that's how impressed I am with it.

It covers many aspects of what is highly topical at the moment.

Good to have you back, Thank you so much for starting this thread, I have linked it to my blog, that's how impressed I am with it.

It covers many aspects of what is highly topical at the moment.

Uh, holy shit, I can't hold a candle to your dox.

Just trying to help out.
O

OTBT said:
Lol I'm a limp dick. Been posting this crap online for too many years. No results so far. Roughly 10k posts online via umpteen socks. RUN KATIE RUN and FUCK THE CULT
Click to expand...


Thank you for posting all this stuff. It must be frustrating to have posted it so many times, for so long, with what appears to be no results, but... sometimes things just have to reach a "critical mass" before the explosion begins, and that time could be now.

Thanks for your patience and persistence!

Nothing better in the world than listening to the oldies!
Thank you for resurfacing OTBT

Good bump, Mary. I will read the links over the weekend during my grandma down time. This brings immediately to mind the recent video I saw (recent to me, at least) of the young adults who took the undercover camera into an org and one young lady stated she was audited by an 11 year old. I have no idea if the 11 year old was SO but just the fact that an 11 year old was in the org auditing is enough to push my buttons on abusive child tactics.
You must log in or register to reply here.

C
What happens to the old age sea org members?
2

R
They're Coming for your Children
2