The Daily News obtained a copy of Remini’s explosive new exposé “Troublemaker: Surviving Hollywood and Scientology” in advance of its Tuesday release.

According to Remini’s book, Cruise’s two adopted kids from his previous marriage to actress Nicole Kidman were heavily under the Scientology sway.

Brooklynite Remini shared a post-wedding ride to the airport with kids Bella and Connor, asking if they’d seen their mother recently.

“Not if I have a choice,” snapped Bella, according to the book. “Our mom is a fucking SP.”

In church terminology, SP is a Suppressed Person and designated enemy.

This book is a series of bombshells.

Deleted. My TRs went out, and I expressed HE&R.

I corrected the link on the HT to The Wrong Guy's post on WWP.

As for the other two links, that is the way I always cross-post -- link in the article title, and a raw link.


“Our mom is a fucking SP.”
-Bella Cruise

“I approve of this fucking message.”
-Jenny Linson 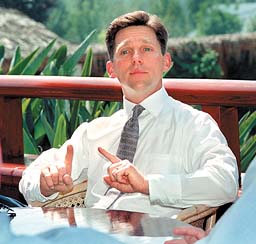 "A world without insanity, LOLOL"
-L. Ron Hubbard​
A

the people that leave Scientology or get kicked out are obviously the sane ones, just listen to all the dialogue and debates on social media

Nicole moved on and she's better off without them

Scientology is a freakshow

It's true that when someone leaves the cult they are better off without those still in, just as a junkie is better without the lurking monkeyman (dealer) when in rehab ... it doesn't feel that way at first (when you are disconnected from) but being completely free of all that cultic slop, being completely cut off from it all and just being able to quietly rid oneself of the indoctrination is overall the very best way to go ... and I say that from experience.

If my own family ever need me I expect I'll be there for them, they did me a huge favour when they disconnected from me. I freed myself from the cult so much faster than I would have been able to had they still been in my life and needing to constantly consider their feelings and tolerating cultic guilt trips and games.

For a slightly different reason Freezoners and Indies need to hunt their much craved 'fresh meat' elsewhere too.


I told you I was trouble said:
If my own family ever need me I expect I'll be there for them, they did me a huge favour when they disconnected from me. I freed myself from the cult so much faster than I would have been able to had they still been in my life and needing to constantly consider their feelings and tolerating cultic guilt trips and games.
Click to expand...

This is so sad, moving and bittersweet, while at the same time being such a healthy, and indeed intelligently healthy, way of looking at things.


CommunicatorIC said:
This is so sad, moving and bittersweet, while at the same time being such a healthy, and indeed intelligently healthy, way of looking at things.
Click to expand...

Thank you for saying that, I appreciate it very much.


I told you I was trouble said:


Thank you for saying that, I appreciate it very much.
Click to expand...

You have a wonderfully healthy and intelligent response to your own situation Trouble, and your wisdom, insight and bravery shows frequently in your posts. They pinpoint the issues accurately and exactly.

I do not spend much time here now, and a couple of weeks ago reading some posts confirmed why. I then saw your responses and, they gave me hope, and hope for Ex's. They keep me reading here.

You have been tough and honest with yourself. Emotional intelligence at its best.
I think it is what works.
I love your posts.

I told you I was trouble said:

And, after robotically disconnecting merely because someone told them to, they will be incredibly fortunate, one day, to reach out and find that you are still right there.

They will have also discovered, by that time, that:
* Clears are not "clear"

* The modern science is not "scientific"

* Uptone and upstat people are not "up"

* Ethics is not "ethical"

* Greatest good is not "good"

* SPs are not "suppressive"

* The theta universe is not "theta"​
The inevitable sometimes takes time to happen, but eventually when Scientologists begin to experience the real Scientology being applied to them personally, they will be forced to come to one or more of the above dark realizations. When that happens, they often show up at your door (literally or figuratively) to beg for help, money or support.

It takes a lot for a Scientologist to finally end up having to go outside of their super-upstat OT circle of "friends" and "comrades"--to ask an SP or DB for help. But by that point, drowning people are not so picky what color their life preserver is.

Scientologists live within a very delicate architecture of lies and delusion and when any part of it begins to topple, there is no foundation to hold the rest of it up. That's when hard core, lifelong Scientologists find out who their friends and family really are. And that's when they "come back" and knock on your door. And that's when we all can give them a gracious welcome home smile and invite them inside.

I know of what I write. All of the above has happened in my own experience, and continues to happen--even quite recently. Sooner or later even Scientologists will be able to "clear the word" Scientology and find out what it really is.
Last edited: Nov 1, 2015

Question 2 ? Bella used the word " fucking ". have ANY of us ever used that particular word back when we were scientologists ?

I got to be honest, even the most lily liver people I knew in the cult used that word - and used a whole fucking lot . Even I used that word back then & honestly the last time I used it was this fucking morning.

I wish my kids hadn't, bu,t my sons third grade teacher reported to me that my son was overhead using the "F" word a recess more than once. Guess where our kids learn that shit ?

Part & parcel of being a scientologist has always seemed to include a profusion of profanity - and every variation of " fuck" seemed a favorite in a cult obscenely obsessed with all human sexual behaviors. There are those that will say those who use profanity merely demonstrate their paucity of adequate vocabulary to properly express themselves - and that seems to fit many scientologists
( particularly ones that were educated by scn schools of any sort ! ) Not to say it the wrong way, but, ever listen to any person " educated " exclusively while in the SO ?

. . . . and someone who has left the cult being called an SP bu anyone still in the cult ? Well, ain't that fucking original !

I mean. c'mon. Putting that kind of thing in a book may well have an impact on those who have not been in the cult & add darkness to an already rapidly growing black eye the cult has already earned with the public at large, but, any X on this board that wants to act shocked by the language from a child of a scientologist ?

I hope your fucking shitting me.

Then Bella would have been 14.

And isn't that a disgusting comment on the whole Scientology ethics system?

That any teenager would make such a completely dismissive, negative, critical and heartless comment about her own mother to adults she didn't even know well?

That's Scientology for you. Bunch of garbage that destroys families and teaches kids to talk about their parents like garbage and label them as 'evil' if they don't get their way.


JustSheila said:
And isn't that a disgusting comment on the whole Scientology ethics system?

That any teenager would make such a completely dismissive, negative, critical and heartless comment about her own mother to adults she didn't even know well?

That's Scientology for you. Bunch of garbage that destroys families and teaches kids to talk about their parents like garbage and label them as 'evil' if they don't get their way.
Click to expand...

Yep. And more than just the ethics system but scientology as a whole is disgusting in what it teaches - and not only allows but encouages.

The Daily Mail now has the story.

Perez Hilton now has the story.

What I find interesting about this is how much of the inner reality of Scientology is permeating the general community.

In the year 2000, most people new little or nothing about it. Miscavige had done his infamous 1998 interview, where people new about the Van Allen belt, but until 2005, when Southpark did the trapped in the closet few people new about OTIII.

It is now common knowledge.

Since Tommy Davis, disconnection is confirmed and known about. Thanks Tommy.

We are now at a point, thanks to Leah Remini and others, where the following is the case;-

The progression has been from the outer to the inner, from the writings to the actual inner workings.

Leah Remini has been a big part of that and continues to make trouble. Well done, Leah.

My hat is off to anyone who causes 'em trouble.

And I love that !


Please, cause more trouble for those bastards.
You must log in or register to reply here.

New Report: Tom Cruise's kids were turned against Nicole by Church of Scientology

Jennifer Lopez at Her Side, Leah Remini Takes Down Church of Scientology

L
Nicole Kidman on Connor and Isabella's Scientology: "I Respect Their Beliefs"