Translation of a French article in the Montreal daily newspaper Le Devoir, Saturday, May 15, 2010. 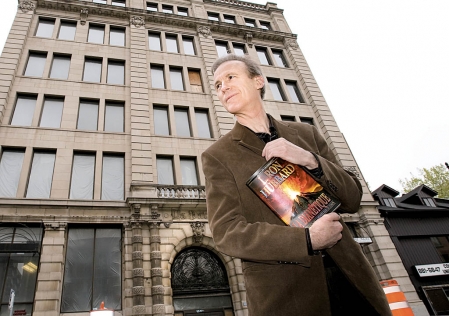 Photo caption:
Spokesman for the Church of Scientology of Montreal, Jean Larivière,
standing before the building which the movement has just purchased
in downtown Montreal. The project will cost 10 million dollars after
renovations.

The Scientologists Strike Back

The objective: To burnish the movement's image to stimulate recruitment

The Church of Scientology is preparing a major offensive in Canada. Within two years, this controversial organization intends to build attractive religious facilities in Canada's major cities at a cost of millions as part of an unprecedented charm operation aimed at recruiting more and more followers.

In Quebec City, the drive has already begun. In the heart of the Saint-Roch district, Scientologists now welcome the public at their new premises. Last January, several hundred people attended the opening of the church, which is the first of its kind in Canada and cost six million dollars.

With a friendly and brightly lit environment, woodwork, and works of art, nothing has been left to chance in this stone building renovated from top to bottom according to the precepts of the movement's founder, L. Ron Hubbard. Everything is designed to attract the passers-by, who can find out about Scientology by visiting an attractive exhibition.

This temple, an "ideal organization" in Scientology jargon, is the first milestone of an ambitious expansion campaign in Canada. By the end of 2011, the organization hopes to open seven churches of the same kind in major cities across the country, as confirmed by the organization's president in Canada, Yvette Shank. Toronto, Montreal, Vancouver, Ottawa, Edmonton, Winnipeg, and Kitchener, Ontario, are the targets. The group has already acquired beautiful buildings at prominent locations in some of these cities.

Montreal is slated to receive the next "ideal organization". The former building occupied by the La Patrie newspaper, a handsome six-floor stone building located downtown, was purchased by the city's Scientologists, who plan to renovate it soon. The cost of this project: more than ten million dollars, according to the spokesman for the Church of Scientology of Montreal, Jean Larivière.

In 2009, the organization made another major acquisition: 190 acres of land - more than 140 football fields - near Toronto to establish a training center.

The Scientologists' offensive in Canada is part of a global program whose goal is to burnish the group's image to boost recruitment. In recent years, 16 other temples - larger and more luxurious than the one in Quebec City - have opened in major cities worldwide, including Washington, New York, Brussels, and Johannesburg in South Africa.

Sociologist Stephen A. Kent of the University of Alberta views this as a financially risky "marketing strategy". "A few years ago, the Scientologists realized that they had recruitment problems. There weren't enough new members. So they created this program to transform the organization's locations into very attractive facilities in the hope that this would stimulate recruitment," says the university professor, who has written extensively on the organization.

Yvette Shank refutes this allegation. "The Church of Scientology in Canada is not declining," she says, while admitting the intention to recruit new followers and promote the organization's expansion.

When asked, the Scientologists all hammer the same message: more and more people are becoming interested in their "religion", an assertion which is difficult to prove. Ms. Shank herself acknowledges that it is difficult to estimate the number of followers. After giving it some thought, she estimates that there are between 15,000 and 20,000 active members in Canada. An artificially inflated number, says Stephen A. Kent, who believes instead that there only a few thousand. In 2001, during the last Canadian census on religious beliefs, only 1,525 persons declared themselves as Scientologists.

In recent months, the group has been under attack from all quarters. A fraud conviction in France, allegations of forced abortions in Australia, and accounts describing the violence of the church's leader David Miscavige have fueled the controversy surrounding the organization.

In Canada, Scientology is recognized as a religion, but it has the status of a commercial organization elsewhere. It is also considered a sect in some countries.

Its doctrine was developed in the 1950s by science fiction writer L. Ron Hubbard, who died in 1986. His teachings, which are dispensed through courses and therapy sold at high prices, are said to purify the body and mind, paving the way for a world without war or crime.

In the new Church in Quebec City, everything is in place to provide these services. In addition to the large ceremonial hall where weddings and baptisms can be performed, one finds rooms equipped with an e-meter - a device which is supposed to measure the emotions of followers - as well as an exercise room and a sauna which is part of a vitamin-based purification.

Twelve hours of confession cost $4,000, while the sauna treatment totals $1,000. And this is just the beginning. To advance in the organization, members must spend higher and higher sums of money to purify themselves.

To achieve complete spiritual freedom, to reach the church's ultimate level, a believer will have to spend at least a half-million dollars, says Jean-Paul Dubreuil, a former Scientologist.

Mr. Dubreuil, 68, was an active member of the organization for six years. He worked for the church in Sherbrooke and then in Toronto, the headquarters of the Church of Scientology in Canada.

He was one of the many "volunteers" who devote themselves body and soul to keep the organization running, people who are poorly paid and whose income depends on the sales of courses and therapy by their local church. For example, the full-time spokesperson for the Church of Scientology of Quebec City, Karine Bélanger, receives $800 to $1,000 a month.

"The people who work there are really dedicated. They put their heart and all their energy into it. A persons has to be programmed, almost sick, to stay there, in these conditions," says Mr. Dubreuil, who considers Scientology as a "pseudo-religion". At the beginning, "I really had the impression that I was part of something that would change the world. But there came a time when I realized that I had become a sort of robot."

Mystery surrounds the financial structure of this internationally ramified organization. As soon as money is mentioned, the organization's officials in Canada are elusive.

One thing is certain: a part of the revenues and contributions is sent to the Church of Scientology International, the parent organization located in Los Angeles in the United States. How much? "It could be 10%," Yvette Shank replies vaguely, explaining that this money is used to purchase services and materials that benefit the entire organization.

And who is footing the bill for the ambitious expansion program in Canada? The entire project is funded by the generous contributions of members, and this is all that the Scientologists will say.

Professor Kent fears that the group is putting great pressure on its members for donations, but the Church of Scientology categorically denies this.

The "volunteers" who work for the organization can benefit from free courses and therapies, a solution which may be attractive to the less wealthy who wish to be active in the organization.

In Quebec City, their numbers have gone from 30 to 100 since the opening of the "ideal organization", according to spokesperson Karine Belanger.

For Jean-Paul Dubreuil, his journey to the heart of Scientology ended badly. He lost not just a great deal of money, but also his family. His three children and his ex-wife remained in the group after his departure. "For them, it is forbidden to speak to me," he says, explaining that he is on the group's blacklist.

Though he had been promised financial support to enable him to study Scientology, his six-month stay in Toronto instead cost him $16,000. He left the church before becoming dependent on the organization. "When you've got nothing left, they take you, and then they bring you into the system," he warns.
Click to expand...

Excellent article. I just love it when Professor Kent steps in to give the facts!
Kudos to all exs and critics who participated.

Great article. And it shows the church for the liars they are.

This will cause more and more people to walk away. I think a lot of their public are totally sick of this Idle Org rubbish.

I didn't read the whole thing, but the dollar orientation comes across clearly.

That $4000 per intensive should scare most away.

Eventually those buildings will all be sold for cheap.

Translation of a second French article in the Montreal daily newspaper Le Devoir, Saturday, May 15, 2010. This article is available online only by subscription or in the print edition.

A small group of anti-Scientology activists will protest today against "the financial and psychological abuses" of this cult. According to its blog, this group, "Anonymous Montreal", holds such gatherings every month outside the organization's premises.

Very active on the Web, these activists are easy to recognize in public thanks to their black and white masks, which are inspired by the anonymous avenger in the American movie V for Vendetta (2005). Some among them demonstrated in Quebec City last January during the inauguration of the Scientology offices in the Saint-Roch district.

The group is active in various countries and took a stand against Scientology for the first time in 2008. It originally campaigned for freedom on the Internet and it set out to protest against the removal from YouTube of an interview video with Tom Cruise, a follower of the cult.

Earlier this week, Anonymous issued a press release announcing that it has compiled the damning revelations of more than 1,000 former members of the Church of Scientology.

"While their backgrounds vary widely, their stories are similar," says the press release. "Many of the same themes run throughout: rigid control of information, enforced disconnection from loved ones who are critical of the group, zealous campaigns to squeeze money from members, physical and emotional abuse of children and adults, slave labor camps designed to reinforce indoctrination, and many other disturbing practices."

The Anonymous press release also refers to an article published by the New York Times on March 6 about the harrowing account of an ex-Scientology couple. "New names are added to the list daily," says the press release. "We hope that the courage shown by those who have dared to speak out empowers more people to come forward with their stories."
Click to expand...

This second article appears on page 7, along with a Scientology time line . The article in the OP appears on the front page and is continued on page 7, which is entirely dedicated to Scientology.

Great story!!
The sad thing is, you could replace the names of the city and church reps and exes in this story for any city with an idle org and the tragedies and PR lies would all be the same.
You must log in or register to reply here.