Get your eyeballs around this!!

The cult is on parade!!

Scientology: What exactly is it?

for your reading pleasure


Should Scientology be illegal?

What are the reasons this organization is still not outlawed?

“ From Blacks Law Dictionary:
Fraud: An intentional perversion of the truth for the purpose of inducing another in reliance upon it to part with some valuable thing or to surrender a legal right; a false representation of a matter of fact, whether by words ot conduct, by false or misleading allegations, or by concealment of that which should have been disclosed, which deceives and is intended to deceive another so that he shall act upon it to his legal inquiry; anything calculated to deceive, whether by a single act or combination, or by suppression of truth, or suggestion of what is false, whether it be by direct falsehood or innuendo, by speech or silence, word of mouth, or look or gesture; fraud comprises all acts, omissions, and concealments involving a branch of legal or equitable duty and resulting in damage to another.


The evidence is overwhelming. French authorities have already determined twice that Scientology is guilty of FRAUD. Practicing hypnosis without a license by fraudulent claims of religiosity, is, itself an elaborate fraud.


The problem in America, is that there is so much fraud permeating society that scientology fits right in…
The last words of convicted Ponzi-Schemer Bernie Madoff, when he was being led away in chains, to Federal prison, were:
“It’s ALL just a big ponzi game”
Click to expand...

RogerB said:
Well Hoaxie, at the risk of upsetting the ladies and others of tender feelings . . . my nickname in the days of my fame on the beaches of Oz was: The COUNT . . .

The true and actual story being that one of the quick witted lads was ribalding me in the way Ozzies do (they greet their best friends as "ya Old Bastard) . . . and he was overheard by one of the girls who challenged him as to what he had called me (it was 1955 . . . we were all rather dainty in those days) . . . my quick witted buddy quickly added the phonetic of the "O" sound to make it seem she had misheard him. ('Cause you know how it sounds without the "O".)
Click to expand...

When I collectively call the rulers of da Co$ " bastards " it is done as the greeting of not as a greeting of ' best friends - or any friends - just calling them as I honestly see them.

EXPOSING the cult
Billionaire Oprah Winfrey airing 3 hours of shows this evening nationwide in the US on her network called OWN. (Oprah Winfrey Network) exposing the Cult of Scientology this evening. Although the shows aired before, for the many these are *New* for them, loaded with new information. 3 hour marathon.
LOL will they call her friends John Travolta and Tom Cruise to call Oprah to block airing ?
They tried this stunt with Cruise and the show on SOUTHPARK. Epic fail.​ 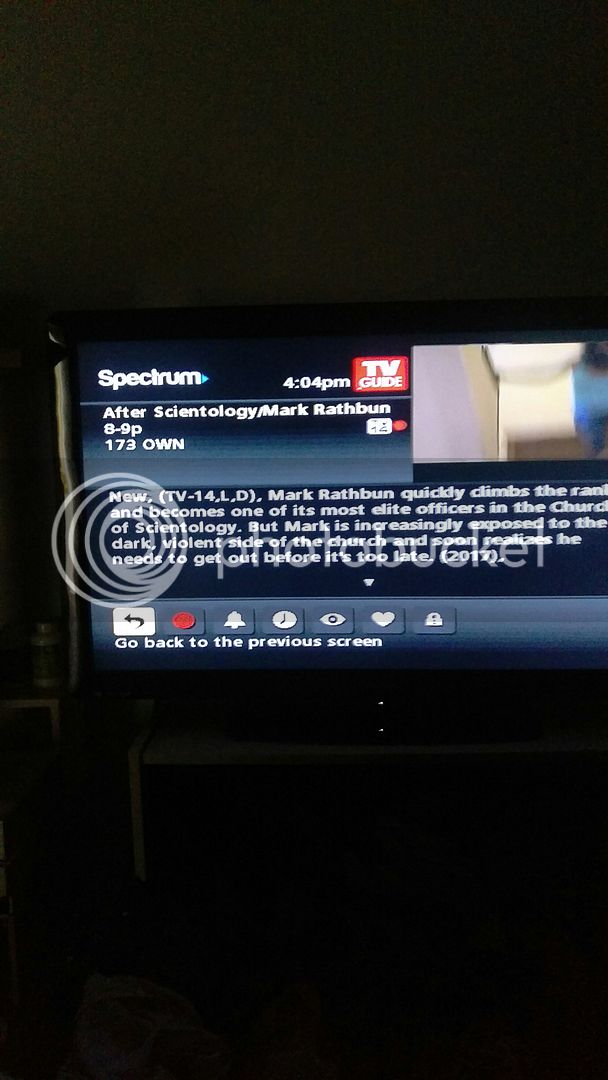 1 full hour of Marty Rathbun contradicting things he has said in latest videos tonight on Oprah Channel OWN this evening.

Here he exposes the inhumanity and the horror within.

OOoooooooops...it all repeats as a re-run so it is 6 hour marathon. As soon as last show finishes airing, all 3 shows air again.​

Karen#1 said:
1 full hour of Marty Rathbun contradicting things he has said in latest videos tonight on Oprah Channel OWN this evening.

Here he exposes the inhumanity and the horror within.
​
Click to expand...

Thanks for the info!

I have my DVR set to automatically record any shows that have a "Scientology" (key word) connection. It continues to amaze me how many shows pop up on the cult.

I just took a quick peek at what is upcoming. . .

I checked with my local org and they said (without asking me anything about who is on those 17 shows) that everyone involved in the shows has despicable crimes and lied about everything!

And they all did it for blood money! Even billionaire Oprah needed some extra cash!

I just saw that 1 hour (again) just to be sure I wasn't losing my mind that Rathbun was a rabid attack dog vs. Scientology.

Add to that 1 hour on national TV exposing his own story, consider the hundreds of other hours of interviews, essays, documentaries, videos, blogs and whistleblowing appearances Rathbun created and/or participated in--that savagely attacked Hubbard, Miscavige, the COS and Scientology tech itself.

His attacks vs the cult literally litter the internet!

What can be concluded from this?

ANSWER: That Marty Rathbun himself is the de-facto founder and/or leader of the ASC, Anti-Scientology cult!

Seriously. He is the only one that organized a Scn-critical website with himself as the "leader" who could not be disagreed with (ever), lest the "hater" (SP) be publicly humiliated, censored or banned! There is no other anti-scn "cult". He was it.

It's kind of like the viciously abusive Church of Scientology creating CCHR (Citizen's Commission on Human Rights) to rid the planet of human rights abuses.

It's kind of like the fanatically destructive charlatan Hubbard orchestrating fanatical attacks on mental health care professionals ("psychs") because (he claimed) they are implanting and destroying people's mental health.

It's kind of like the sociopathically violent Miscavige attacking, terrorizing and beating Sea Org slaves--after which he smirkingly hosts garish propaganda rallies--at which he wildly stirs up cult members to "obliterate" those SPs who inflict conflict, violence, war, insanity & criminality, on this planet.

Let's just "Chinese School" this one more time, for certainty:

"RATHBUN IS THE FOUNDER OF THE ASC!"

(everyone on the internet chants back):
"RATHBUN IS THE FOUNDER OF THE ASC!"

Because their maniacal misdirection and lying hypocrisy is so preposterously apparent, they can't afford to be asked any questions that they have no conceivable way of answering.

ANSWER: That Marty Rathbun himself is the de-facto founder and/or leader of the ASC, Anti-Scientology cult!
Click to expand...

HH ....Does this mean that he himself leads the TROIKA, or is he clandestinely BEHIND the TROIKA ?​


Karen#1 said:
HH ....Does this mean that he himself leads the TROIKA, or is he clandestinely BEHIND the TROIKA ?​
Click to expand...

Brushing my tinfoil aside (doubt formula at the church of hoaxology, lol) that speculative but provocative thought has crossed my mind more than once.

If Scientology and Scientologists were slightly more sane, their nonsensical "tactics" and "strategies" could be more accurately detected. But, like a crazy street person ranting and threatening pedestrians and cops alike, it's not always simple to know WTF they are doing or going to do.

Their bizarre unpredictability is both an asset and a fatal flaw. Their lies are so outrageously and obviously crazy (ref: "BIG LIE" at Wiki) that it sometimes crashes the society's collective lie detector Apps. Who could have believed, for example, that Scientologists had perpetrated an en mass infiltration/espionage operation into US governmental agencies?! What cult would have the requisite insanity and self-destructive bravado to even think of such an outrageous and suicidal plot, let alone try to execute it in secrecy?

Virtually ALL of Scientology's brilliant "ops" fail famously and backfire with ferocity. A 15 second internet search instantly reveals the inordinate number of bitter enemies that Scientologists have turned into vitriolic whistleblowers and indefatigable voices of outrage that continue to crescendo. What else is ESMB, if not a convenient and fun place to lob truth grenades at the human rights monstrosity known as Scientology?

I don't know the exact recipe and ratios that comprise Rathbun's destructive madness. But I do know the ingredients of the toxic meals he serves up with that cockeyed smirk. It is made up (in whatever varying amounts) of:

-- Imperious contempt for others

-- Fanatical belief in his own sociopathy

-- Pride in his own ruthless, remorseless Rathbunism


I am struck, again, by your observation (earlier post) that Rathbun went "on record" (on the Oprah-produced hour chronicling his life in Scientology) in shocking dead-agent contradiction to everything he is making hate videos about the last months. He proves beyond any doubt that he is a despicable liar. But he doesn't seem to mind losing all his friends/supporters and engendering the hatred of countless people across the world. For what prize did he so cheerfully sacrifice all that is sacred to any normal person?

The only answer that seems possible is--money. (Good luck to his previous attorneys who will try to discover evidence of that, on behalf of their firm and every other person who follows the evil cult's crusade of terror.

But, this is Scientology we are talking about. So, there could (theoretically) be something else instead of or alongside of financial rewards. Duty. That is a chronic theme in Scientology, wherein only the cult's top guru makes billions while everyone else slaves a billion years in the distant hope of earning not even 2 cents--but instead a 2-line "admiration particle" in their ethics folder, known as a "commendation report".

Rarely does a Scientologist "rise above" sanity and conscience to the diabolical degree that Hubbard/Miscavige ascended to. However, Rathbun is making valiant efforts to catch up!
Last edited: Aug 28, 2017

Does this mean that during her show JT won't bring Opra Cristal & serve her whole audience ?

Does this also mean little TC won't come jump on a couch for Opra ?

Was there some upset Opra had with them ?

Oh, Marty. I can't say anything about him I haven't already said : he is a house stooge.


Added : To me, Marty has always been a snake. He crawls this way & that way with regard only for himself. He only plays for Marty.
Last edited: Aug 28, 2017
You must log in or register to reply here.

The Fauteux Wrongful Death Lawsuit - Important For Many Reasons