Compare: Greta Van Susteren Tweet and the purpose of a Scientology noisy investigation.

Definitely not creepy. Move along, nothing to see here. 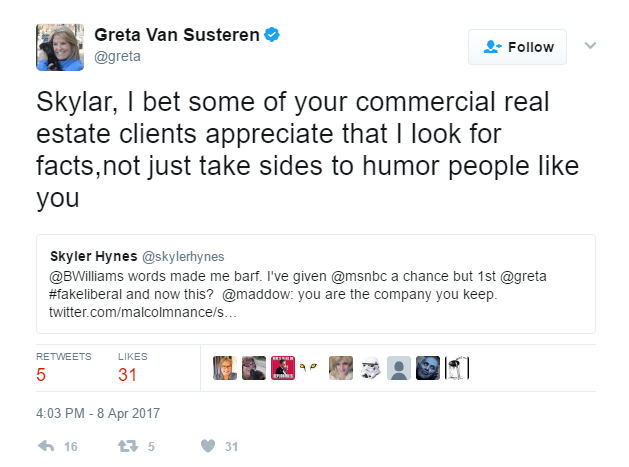 Noisy investigations are used by the Church of Scientology to intimidate, harass, and attack their enemies. The Church used to openly label such people as Fair Game. The goal of a noisy investigation may not be to find out anything, but to harass the person being investigated. The procedure is to contact friends, neighbours, co-workers, etc. and inform them that they are investigating crimes by the target person.[1]

A 1966 Hubbard Communications Office Executive Letter entitled "How to do a NOISY Investigation" described the practice as follows: "You find out where he or she works or worked, doctor, dentist, friends, neighbours, anyone, and 'phone 'em up and say, 'I am investigating Mr/Mrs .......... for criminal activities as he/she has been trying to prevent Man's freedom and is restricting my religious freedom and that of my friends and children, etc'".[2][3] The investigation may also be done by hired detectives.

A memo, reprinted in the British paper "People", said: "We want at least one bad mark on every psychiatrist in England, a murder, an assault, or a rape or more than one.... This is Project Psychiatry. We will remove them."[3]

Does this Blind Item about a SEC investigation of a Ponzi scheme concern Scientology?