Episode 5 of Leah Remini's Docuseries Scientology and the Aftermath has now aired. This episode focused on allegations of forced abortions among Scientology Sea Org staff. As result, all of the resulting headlines or news stories have focused on that important and significant allegation.

A Google search of TMZ.com for the terms Scientology, abortion and remini for the past week reveals - nothing: 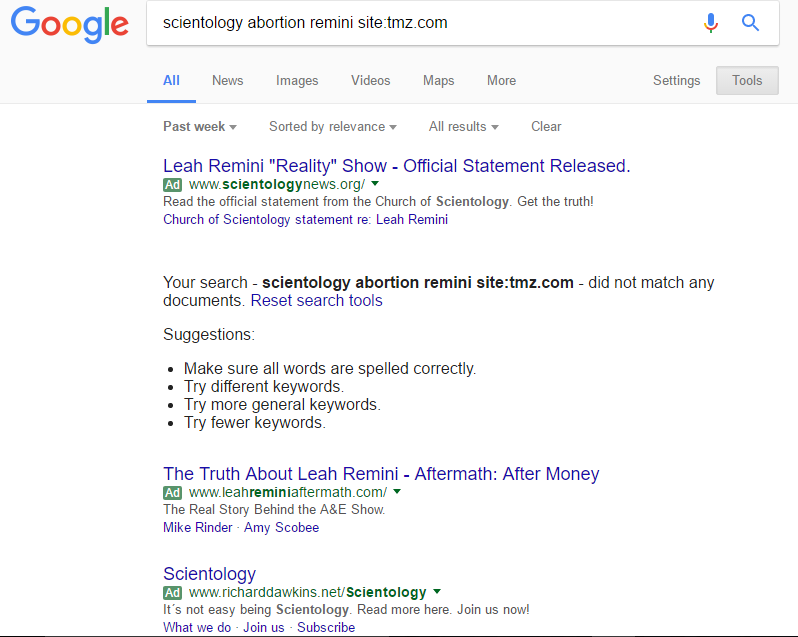 Instead Harvey Levin's and TMZ's only story after Episode 5 is:

The Church of Scientology has gone on the attack against A&E, alleging a glaring double standard by cancelling "Generation KKK" but touting its Leah Remini anti-Scientology program.

TMZ obtained a letter Scientology's lawyer fired off to A&E, in which it scoffs at the network's decision to pull the plug on the 'KKK' show because producers paid some of the Klan members money. A&E said it was a direct violation of its policies to pay the subjects of a documentary.

The Scientology lawyer counters in the letter, "Church of Scientology understands that two on-air accusers/participants in Leah Remini's docuseries, "Leah Remini: Scientology and the Aftermath" received substantial cash payments for their participation, in violation of the same standards."

The letter goes on to essentially accuse A&E of becoming partners in Remini's show, giving them "free advertising and promotion for anti-Scientology books they have published."

And the lawyer says, "It is hypocritical for A&E to proclaim its intent to 'expose and combat racism and hatred in all its forms' in cancelling the KKK show and at the same time promote Leah Remini's program which promotes hatred that A&E claims that it wants to stop."

An official at A&E tells us there's a difference in the 2 shows because Remini is an executive producer on her show and she's "not the member of a hate group."

We reached out to Remini's rep but so far, no word back.

Obviously, TMZ was able to "obtain" Scientology's complaint letter only through a feat of awe-inspiring investigative reporting.

To my memory, TMZ always avoids negative coverage of the Church of Scientology. For example, heretofore TMZ's coverage of Leah Remini's series has been nonexistent.

Look, it is not like Harvey Levin and his TMZ minions are, you know, journalists. It is not they have ever heard of, much less follow, the maxim that the role of the journalist "is to comfort the afflicted and afflict the comfortable."

But seriously, Harvey Levin and TMZ, could you possibly shill more for the Church of Scientology?

Could you possibly be more in the pocket of the Church of Scientology?

Could you possibly be more in the tank of the Church of Scientology?

Only you future coverage will tell.

Tony Ortega has an additional, more substantive take on the issue.

If you’ve seen Claire Headley talk about this subject before, you knew that she was going to deliver a serious shock to the system for viewers Tuesday night, and she did not disappoint. So what could David Miscavige possibly do to counter what was sure to be a wave of stunned press reactions describing Scientology’s barely believable reliance on forced abortion to keep its workers childless?

Well, what else could Miscavige do but turn, once again, to Harvey Levin?

We’ve pointed out numerous times that when David Miscavige wants a story published that serves his purposes, more often than not it shows up at TMZ. And it always sticks out like a sore thumb because unless Miscavige is feeding him, Harvey shows no interest in Scientology stories whatsoever*.

Take Leah’s series, for example. Media organizations from the Washington Post to Rolling Stone to the Hollywood Reporter have been following every new twist in the A&E series as a major revelation. But at TMZ? Not a single word. Nothing. Nada.

Until yesterday. And then, suddenly, TMZ had a Scientology story! And would you believe it, Scientology was getting a raw deal!

You’ve probably seen the story by now. TMZ had obtained (wink, wink) a letter by Scientology attorney Gary Soter complaining that A&E was being hypocritical by canceling a show, originally titled Generation KKK, when Leah Remini’s show was guilty of the same ethical lapses.

Still, we were disappointed that our fellow scribes had not done a little further Googling about Gary Soter, A&E, and Leah’s show.

Not a single outlet mentioned, for example, that just a few weeks earlier, we reported that Soter had sent a very different kind of complaint to the producers of Scientology and the Aftermath.

On December 5 we published Soter’s earlier letter, and it’s pretty disturbing. In the series premiere, Leah Remini interviewed Amy Scobee, who explains on camera that as a Scientology staffer at 14, she had been raped by a co-worker, an older man, and part of the incident had happened on the premises of the local Scientology mission. The church kept the incident not only from the police but also from Amy’s parents, and the attacker was never punished.

Soter, however, tried to derail Leah’s program by claiming that Amy had not been 14 but was in fact 16, which was the age of consent in Washington State at the time. And, that Amy had been the “sexual aggressor” during the encounter. He also claimed that the staff at the mission hadn’t done more because they never learned the details of what had happened to Amy.

Amy, however, gave us enough detail to demonstrate that the incident could not have occurred after she had turned 16, and that her memory was quite strong about when it did occur — during the summer when she was 14. As for her superiors being aware of what happened, Amy pointed out that she was forced to write a report that detailed the rape, and then she had been forced to show it to every worker in the mission — and get their signatures on it. (And that’s standard Scientology procedure.)

Now, call us old-fashioned, but we have this nagging feeling that before you promote a story about a letter written by a Scientology attorney pretending that he speaks from a position of moral authority in order to condemn unethical behavior by A&E, wouldn’t it perhaps be helpful to know that just a few weeks earlier, that same attorney was threatening A&E by claiming that a 14-year-old was the “sexual aggressor” in a statutory rape?

Are we the only ones who think this kind of big-picture contextualizing might be sort of important to reporting on anything the Church of Scientology tries to sell the public, especially through a friendly outlet like Harvey Levin’s TMZ?

[*The one exception to this trend — TMZ’s reporting last year on Ron Miscavige being stalked by private investigators hired by his own son, David Miscavige — was a story based on stunning court documents that were dropped in the lap of the Los Angeles Times and TMZ by Lisa Marie Presley, via her attorney. The documents were so juicy, even TMZ and the LA Times, another outlet that has shown little interest in reporting on Scientology, couldn’t ignore them.]

Tony noticed the same thing you did, OP

I also made this observation after you posted your OP at WWP in the Leah Remini Scientology Aftermath thread, and I thought folks here might appreciate it as well.


"I think you may find if you dig deeper that TMZ has never covered coerced/forced abortions in Scientology.

The only articles that I can seem to find from TMZ when Googling "scientology abortion site:tmz.com" do not mention abortion in the text - rather, it is always someone in the comments who brought up the charge.

I think it's interesting that one of the guys following Leah and Mike on the last episode claimed he was working for TMZ.
Obviously he wasn't, but odd of him to say that.

Whoever's voice that is doing the narrating on TMZ has the most annoying shrill voice in the world. I can't watch it because of that.

The AV Club: Scientologists want their A&E show canceled, too

In a rare case of an organization actually asking to be given similar treatment to a high-profile racist hate group, the Church Of Scientology has denounced executives at A&E as hypocrites for continuing to air Leah Remini’s Scientology And The Aftermath while canceling the KKK docu-series Escaping The KKK. In a letter sent to the network—and initially obtained by TMZ—church representatives accused Remini of paying critics of the organization, including herself, to appear on-camera for her show, linking it to charges that producers of Escaping The KKK paid Klan members for access while filming.

Of course, those writers and speakers aren’t spending their profits from the show—if they’re actually getting any—on white hoods or cross-burning supplies, suggesting a certain moral gap between the payments made during Escaping The KKK, and whatever money was doled out for Remini’s show.

Leah Remini's 'Scientology and Aftermath' Coming Back for Season Two!
12 13 14