It might be argued that all religious schisms are futile, akin to arguing over which type of cheese the Moon is made from. But there seems something especially silly about such a fracture within Scientology, as risible a magnum of snake oil as has ever been sold. This documentary introduces the upstart Judean People's Front of this scenario, the Independent Scientology movement, launched by former Scientologists displeased with church leader David Miscavige. Likely to amuse connoisseurs of human gullibility. Andrew Mueller
Click to expand...

Just who are these "upstart Judean People's Front" you ask?

Nataku said:
Discussions on other forums:

if they are going to war, is there a way that we can arm both sides?

Dear All, As a true Scientologist I can tell you from the bottom of my heart that Scientology is a wonderful religious philosophy. Our Church helps, supports, cares for its believers tremendously and helps anyone who is in need.

Ok there it is on Youtube, am also uploading now to RuTube and also Vimeo - enjoy.
Click to expand...

As we predicted, a version of Channel 4′s documentary, “Scientologists at War,” has appeared on the Internet. We don’t know who’s responsible for it, but we’re embedding it here so our readers not in the UK can get a look at it.

We also asked some ex-Scientologists in the UK to give us their impressions of the show after they got to see it when it first aired.

And we want to thank our readers who gave us live updates of the program earlier today. Now for the rest, give it a look and tell us what you think!

For those having trouble viewing - Enjoy.

A Roast Beef Productions presentation aired on ITV4 UK tonight. Don’t know how long it will be up on You Tube (courtesy apparently of WWP) so you may want to watch it soon if you are interested.

Rike Rinder on "Scientologists At War"

Though somewhat outdated, this is a pretty objective view of the “Independent Scientology world” a year or so ago.

Marty and Tony Ortega were both very good. Thoughtful, intelligent and well-informed. Mosey was magnificent — calm, rational and cogent.

Roast Beef Productions crammed a lot into a little time in a well constructed and edited piece that didnt dip into sensationalism but treated this as a serious issue of religious freedom.

Of course, the Church of Scientology looked like abject fools and their statements quoted at the end were astonishingly incompetent and utterly disproven by everything that had just been seen.
Click to expand...

Mike (on his own blog) re: "Scientologists At War"

Mike (on his own blog) re: "Scientologists At War"
http://www.mikerindersblog.org/scientologists-at-war/

If you have not yet watched this program, go to his blog and watch it.

Though somewhat outdated, it is a pretty objective view of the “Independent Scientology world” a year or so ago.

Marty and Tony Ortega were both very good. Thoughtful, intelligent and well-informed.

Roast Beef Productions crammed a lot into a little time in a well constructed and edited piece that didnt dip into sensationalism but treated this as a serious issue of religious freedom.

Of course, the Church of Scientology looked like abject fools and their statements quoted at the end were astonishingly incompetent and utterly disproven by everything that had just been seen.
Click to expand...

I thought the doco was great, excellent reporting. Mosey is the best thing that could have happened to Marty, IMO. I wish them well.

i've posted it up in the Scientology Group:

Administrator
I really enjoyed the show. Thanks to everyone who was involved.

This thread has been up for a week, has over 50 replies already, and I just found out about it.

In the 2+ years I've been here, this board has exploded in volume. It's tough to keep up with it all. If I post a new thread or reply, it will show up on the right side of the main forum screen, but even at any hour of the night or day, it soon gets buried under even newer posts.

I'm going to have to actually read this thread one of these days.

http://scientologyresponse.co.uk/
i just received this from anon. hmmmm.
it is the scn response, i havent watched it yet and think i might do a scan first.

oh fuck never mind, lol. the page is clean but its just the same old drivel, marty the psysho, cos unprecedented growth and channel four the hack job channel. evidently they have had this waiting on the wings.

Here is my two cents, as posted at The Bunker

I enjoyed this very much! Tony, you did an excellent job explaining things.. a real presence there and much appreciated.

Kudos to the producers, staff and Channel 4 UK as well as to those interviewed or who contributed in some way to make this happen.

Of course, the Squirrel Busters come across as insane as they really are! What a joy it was to know that many people got to see this in the UK!!

What I also came away with after watching it:

It was very interesting that this was filmed last year and yet so much has evolved since. There are definitely more Independent scientologists out of the church and doing their own thing now. Marty's world has evolved in a different direction, one I see as a good sign. That he told the producers that, since the filming of the show, he no longer calls himself a scientologist is important and explains why his blog is no longer the connection it once was and he is not the same person he was a year ago. I give Mosey much credit for loving him and perhaps even guiding him to be willing to look at other points of view because we know he's a hardheaded, stubborn and self-righteous man at times, unwilling to use Hubbard's ARC tech which he covets so much elsewhere toward those he refuses to admit he's harmed in the past.

But I have faith that in time he will awaken to this discrepancy and become humbled and do what is right by these people because he's got a wonderful caring wife who has suffered what were intended to be his natural consequences of his actions past and present. She has dealt with them with the humility, courage and openness he seems to struggle with.

What I like about Mosey is that she seems willing to risk being wrong but she takes the chances which she feels are right, no matter the consequences. She bears hers and his consequences well. Love will do that.

Marty, on the other hand, assumes he's right, even when he's sometimes wrong, and he does this believing there will be no natural consequences to his choices because he believes he's right no matter what - therefore others must be wrong. So when the natural consequences come from being wrong about being right on a particular thing, only then does he retreat, rethink and admit being wrong. But one cannot say 'I pulled it in' ( karma ) and think that clears the slate for all the other things of the past that have not been address with communication, compassion, humility and caring... something I don't think Marty even knew existed outside of the cult until he met Mosey. She tips the scale greatly in these important qualities.

So, with his evolution out of Scientology, the way it's been going, I think he'll eventually come around and see that he has some rethinking to do - and some actions to take that he's been avoiding, If he is ever to be as widely regarded and respected as she is. After all, I think that this is what all that self righteousness has been about. I see a slow but even change for the better in him on this and I think that Mosey has had the biggest impact.

There is an old saying which I think fits his situation... "Pride only breeds quarrels, but wisdom is found in those who take advice".~ .Proverbs 13:10

And then what does Marty do to avoid quarrels? He avoids or dismisses what others have asked or stated about those whom he has hurt by his actions in the past. Maybe Mosey will help him with this.. maybe she already is. He's certainly getting better at admitting he's not a God and that karma can be a bitch but he has a ways to go.

Lastly, this documentary will prove to be very damaging to the image and coffers of the Church of Scientology in the UK. Rightfully so.

What Scientologists at War Left Out: Some Annotations on Channel 4′s Documentary Before Scientologists at War aired last night on Channel 4, the documentary’s director, Joe Martin, told us he was looking forward to our review of the film. But we told him that since we had helped with the making of the movie and appeared in it, “reviewing” it would be bad form.
Instead, we’re fortunate that so many of our readers contributed their opinions about the documentary. Those comments tell us that Martin and his producers — Danielle Clark and Michael Simkin — put together a film that is creating an interesting debate about independent Scientology, Marty Rathbun’s role in it, and the future of the church.
We wanted to add just a few factual asides about the film and the response it’s getting. 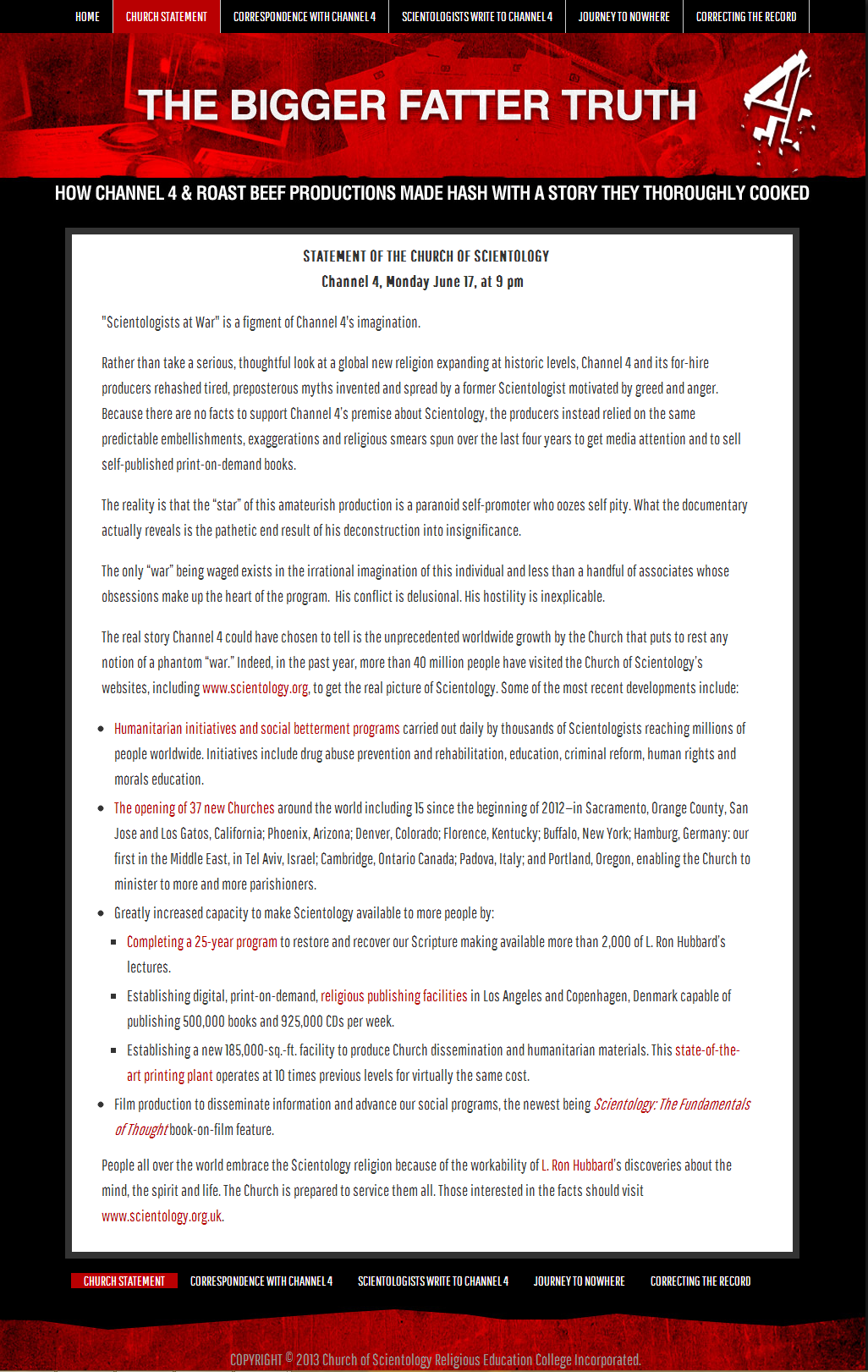