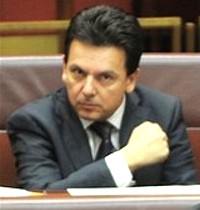 INDEPENDENT senator Nick Xenophon has challenged the nation's top law officers to not be "wimps" and bring in anti-cult legislation similar to laws operating in France.


A warrant has been issued for the arrest of the cult leader, former brothel keeper Rocco Leo. He is believed to be overseas, possibly in Vanuatu, where he was planning to move his followers in preparation for a 2012 Armageddon.
Senator Xenophon said it was possible to frame laws that protected freedom of religion while also protecting people from abuse by cults.


"The two are not mutually exclusive, and I believe any politician who claims otherwise is simply wimping it," Senator Xenophon said yesterday.


Under French laws, judges can dissolve cults if their leaders are involved in criminal activity and can ban cults from advertising, and from recruiting near schools, hospitals and retirement homes.


Senator Xenophon said it was time for the reform proposal to be put on the agenda of the next meeting of the standing committee of attorneys-general.


"These cults and sects are using increasingly sophisticated techniques of manipulation and our current laws have not kept up with these tactics," he said.


"Innocent people are losing their fortunes and their freedoms to these cults, and it's up to legislators to create better laws to protect them.


"Anti-sect laws have been operating in France for almost a decade. These laws pose no threat to mainstream religions, but they have been used to curb the insidious activities of cults.


"I reject claims these sorts of laws are undemocratic."


Senator Xenophon said the attorneys-general should consider an opposition call for the Rann government to apply its anti-bikie, serious and organised crime legislation to cults running a criminal enterprise.


Senator Xenophon denied he was using the Agape cult publicity as a vehicle for his long-running campaign against the Church of Scientology. "This is not about using this doomsday cult to push the concerns many have about Scientology. It's all part of the same issue, which is there ought be protection for people from cults," he said.


Mr Rau said the state government was "keeping the matter under close review to determine what action, if any, it might be able to take".

What a great polititian.

I nominate him president of the first world government. Then we can all vote.
You must log in or register to reply here.

Cults are under attack in Australia