In 2009, researcher Jeff Jacobsen wrote about Scientology’s documented problems bringing foreigners to the United States to work in its “Sea Organization.” Anecdotally, ex-Scientologists say that the church relies heavily on foreigners to accept jobs under the bizarre working conditions of the Sea Org, which requires signing a billion-year contract and working 16-hour days, seven days a week, often at menial labor jobs, and for just pennies an hour.

Scientology brings such workers to this country under a special visa — the Non-Immigrant Religious Worker or R-1 visa — under the idea that they’re coming here to perform religious duties at a bona fide tax exempt religious organization, which are the requirements to qualify. Some of those applications had been denied by the United States Citizenship and Immigration Services (USCIS) and had been appealed, and those appeal documents were public. Based on them, Jacobsen found that Scientology had a hard time explaining how Sea Org employees, who often work in menial or clerk positions, should be considered “religious” workers. He also found cases where the workers themselves were bewildered by the entire process, and that they found themselves virtually indentured servants in the US, making next to nothing and pretending to be “religious” workers when often they were just doing janitorial work.

But how big was this issue? For years, we’ve heard stories of large numbers of immigrants being brought to the US to work in the Sea Org and staff Scientology facilities, particularly its “spiritual mecca,” the Flag Land Base in Clearwater, Florida.

“Why would a religious group need to bring in workers to the United States?” Jacobsen asked. And just as importantly, “Who would want such a job, where you sign a billion year contract, work [100] or more hours per week, and get $50 a week plus room and board?”

Now, for the first time, we have a better idea of the scope of Scientology’s reliance on the R-1 visa program, thanks to researcher and friend to the Underground Bunker, R.M. Seibert, who used the MuckRock investigative website to obtain a stunning disclosure of visa records from the USCIS.

Thanks to a change in regulations that took effect in 2009, data about the number of visa applications being made by specific tax-exempt organizations became legally searchable under the Freedom of Information Act. Seibert asked for, and received, a breakdown of the total number of visa applications from January 2009 to June 2015 that had been submitted by organizations with “Church of Scientology” in their names, along with data on whether the applications had been approved and from which country the worker was originating.
Click to expand...

Related WWP thread where I share some of the backstory behind this awesome dox drop:
https://whyweprotest.net/threads/foia-request-reveals-data-on-religous-worker-visas.131035/

If anybody reading this has first hand experience with getting SO workers via questionable R-1s, please consider filing an immigration fraud report with the USCIS here: https://www.uscis.gov/avoid-scams/report-immigration-scams
Last edited: Jan 14, 2016
A

And just as importantly, “Who would want such a job, where you sign a billion year contract, work [100] or more hours per week, and get $50 a week plus room and board?”
Click to expand...

Status update for this ongoing FOIA project, and some new data, posted over on WWP starting here: 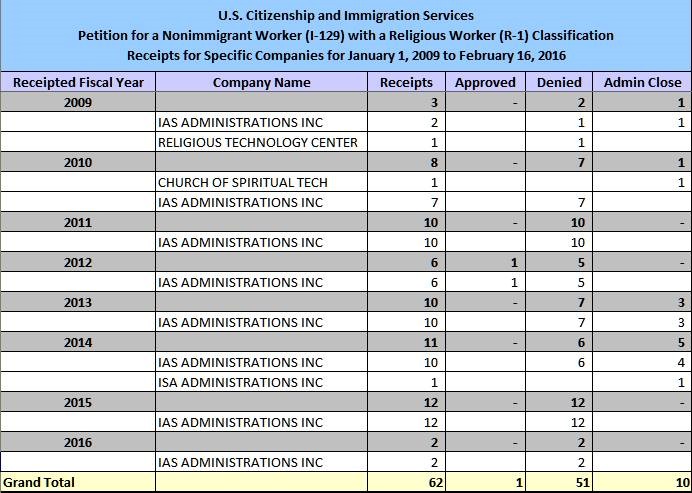 
Enthetan said:
Answers:
1) Somebody from the Third World whose living conditions are such that Sea Org life would be an improvement.
2) Somebody who wants to get into the US, and plans on blowing as soon as they arrive on US soil.
3) Some terrorist who wants to get into the US, and have a safe place to hide until he decides to "go active". I'm reminded of the guy, wanted for murder, who joined the Sea Org as a way to drop out of sight.
Click to expand...

Exactly. The SO would be heaven compared to what some third world conditions are like. And they are coming into the SO not becuz they love Scn but just to escape what they were used to. So if they see that life outside the cult looks even better than that, given the opportunity, they would blow with no qualms.
You must log in or register to reply here.

Scientology Took His Money and His Life