BardoThodol said:
Oh, you silly goose. I know what you meant by "believe."

What made me curious was why.

You wrote, "I went with The Anabaptist Jacques because it's closer to what I believe."

Traditionally, the character Anabaptiste Jacques is considered to have kindness and pessimism as dominant traits. I was curious just what traits you felt he had that made you pick him. Such as, why did you identify with him?

If identify with him you did.

Voltaire was satirizing the shit out of almost everything in Candide. Layers upon layers of satirism. Every character had levels of self deception pursued in utmost earnestness.

It's the earnest innocence which gives the work its power.

Water often symbolizes spirit or soul. Baptism is not only a ritual cleansing, but an introduction to the spiritual world. The Anabaptists believed a person had to be baptized by choice, which was not available to an infant, thus the need to be "re-babtized." But, the argument is "how can you be baptized again if the first time isn't valid?"

I was simply curious if you had caught the irony that someone who believed in being saved through baptism would end up being drowned by trying to save another.

These types of ironies abound in Voltaire's works. And are often missed.

Because he was satirizing religion, Voltaire's works also apply obliquely to Scientology. The ironies of those things which one tries to use to gain salvation ending as slavery or demise.

It's also ironic that Hubbard credited the guy.

But, hey, who am I to offer up observations. I'm merely a humble gardner, cultivating what little I can afford with my limited resources--mental, spiritual, economic, physical.
Click to expand...

Kindness and pessimism. Although I do have a ferocious rhetoric streak at times.

Yes, it is layed with levels of irony.

I think you have the same level of appreciation for Candide that I do.

But, we must cultivate our garden.

The Anabaptist Jacques said:
Kindness and pessimism. Although I do have a ferocious rhetoric streak at times.

Yes, it is layed with levels of irony.

I think you have the same level of appreciation for Candide that I do.

But, we must cultivate our garden. 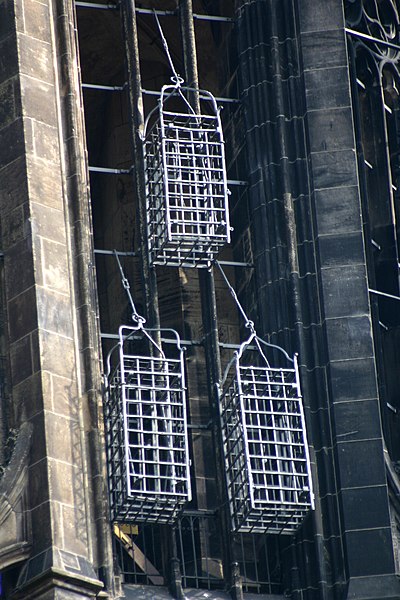 For decades after the execution, the Anabaptists’ remains rotted publicly in cages on the tower of St. Lambert’s — like these still displayed there to this day. (cc) image from Rüdiger Wölk, Münster.
Click to expand...

The Anabaptist Jacques
You must log in or register to reply here.

The greatest power of all