William S. Burroughs was a cultural prism. Through him, the mid-century demi-monde of illicit drug use and marginalized sexualities—of occult beliefs, alternative religions, and bizarre conspiracy theories—was refracted on the page in experimental writing that inspired everyone from his fellow Beats to the punks of later decades to name-your-countercultural-touchstone of the past fifty years or so. There are many such people in history: those who go to the places that most fear to tread and send back reports written in language that alters reality. To quote L. Ron Hubbard, another writer who purported to do just that, “the world needs their William Burroughses.”

And Burroughs, so it appears, needed L. Ron Hubbard, at least for most of the sixties, when the writer became a devout follower of the Church of Scientology. The sci-fi-inspired “new religious movement” that needs no further introduction proved irresistible in 1959 when Burroughs met John and Mary Cooke, two founding members of the church who had been trying to recruit Burroughs’ friend and frequent artistic partner Brion Gysin. “Ultimately,” writes Lee Konstantinou at io9, “it was Burroughs, not Gysin, who explored the Church that L. Ron Hubbard built. Burroughs took Scientology so seriously that he became a 'Clear' and almost became an 'Operating Thetan.'"

Burroughs’ dislike of the church’s founder and extreme aversion to “what he considered its Orwellian security protocols” eventuated his break with Scientology, which he undertook gradually and publicly in a series of “bulletins” published during the late sixties in the London magazine Mayfair. Before his "clearing course" with Hubbard, in a 1967 article excerpted and republished as a pamphlet by the church itself, Burroughs praises Scientology and its founder, and claims that “there is nothing secret about Scientology, no talk of initiates, secret doctrines, or hidden knowledge.”


I remember doing the review session on William Burroughs before he attested Clear in 1968. He was pleased to have reached that state.​
​
The only person he would speak to at the AO was me, anyone else he would cut them dead.​
​
After attesting, the Reg asked him if he was ready to sign up for his OT levels.​
​
"I don't think so" was his waspish reply. The Div 6 lady asked him to write a success story on attesting clear.​
​
He wrote "Adequate" and then flounced out of the building on his way back to NY.​


In the early 1970s, Burroughs wrote approvingly of some aspects of Scientology "tech," but also warned that Scientology came into being, "fundamentally as [a means for] an ersatz [substitute] immortality for its founder..."

Photo and caption from The Auditor newspaper, circa 1968 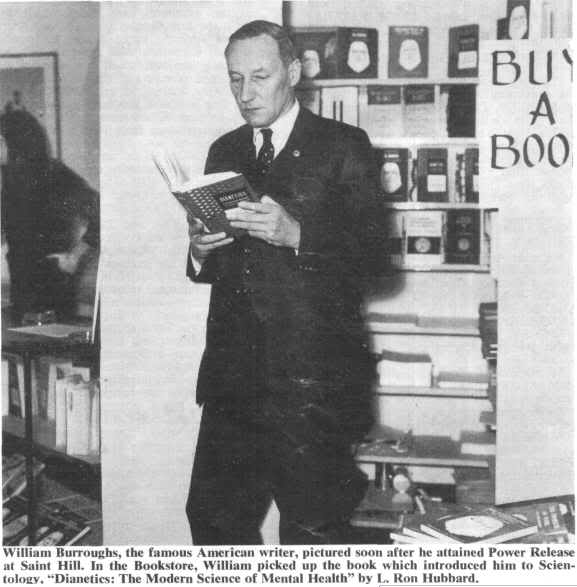 An excerpt from the 1972 book Naked Scientology by William Burroughs, re. his experiences at St. Hill in the late 1960s:


...I remember one weekend after a few drinks confiding certain doubts about Scientology to a supposed friend.​
​
"They'll wring it out of me at the next Sec Check," he sobbed. "Why don't you go straight to Ethics and make a clean breast of it?"​
​
I remember some old biddy dragging me into a broom closet... and asking me on the e-meter, "Do you have any unkind thoughts about L. Ron Hubbard? ... That reads. What do you consider that means?"​
​
"He's so beautiful he dazzles me. I can't help resenting it sometimes."​
​
In the words of Celine - "All this time I felt my self respect slipping away and finally completely gone. As it were, officially removed..."​
​
Like an anthropologist who has, after unspeakable indignities, penetrated a savage tribe, I was determined to hang on and get the big medicine...​
​
...I was ordered for a Joberg [Security Check] because I rockslammed [a type of 'read' on the e-meter] on a question, "What would have to happen before Scientology worked on everybody?" (I couldn't confront it.) The [1961] Joberg http://www.xenu.net/archive/books/isd/isd-5i.htm ...is published for the first time in Inside Scientology http://www.xenu.net/archive/books/isd/isd.htm [1972]...​
​
..."That's it!" barks a sulky Sea Org lieutenant in the doorway of the Public Ethics Officer. ​
​
"Everybody line up for a Sec Check."​
​
When my turn comes I pick up the cans.​
​
"Do you consider St. Hill a safe environment?"​
​
"Yes, of course I do."​
​
"There's a read there. What do you consider that could mean?"​
​
"Well, we're surrounded by suppressives. It frightens me to think of these devils all around us."​
​
I was learning...​
You must log in or register to reply here.

New Book on William S. Burroughs and his Scientology experience