In 1954, after having activated what he called the "religion angle," Hubbard had spoken publicly, respectfully, of Buddhism, and even of Taoism, and also of the Vedas.

With the assistance of his editor, John Sanborn, he had, during the lectures in Phoenix in 1954, presented a fairly erudite explanation of how it was that Scientology followed in the tradition of these subjects, overlooking, conveniently, that neither Buddhism nor Taoism were originally religions but wisdom schools and philosophies, and only became religions after being degraded. Yoga, the highest manifestation of the Vedas, also was, and is, not a religion.

Hubbard even briefly spoke positively of Christianity. The 1954 book, 'Creation of Human Ability', opens with a quote from St. Luke of the Bible. (Most likely a touch added by John Sanborn.)

The adornment of Scientology as a "religion" was tolerated by Scientologists who had already been told by Hubbard that religion was the product of extraterrestrial "implanters" - in essence, ancient psychiatrists - and that Scientology was actually a new science.

Posing as a religion would keep the government and tax collectors at bay, and allow the science of Scientology to "Clear the planet" and reverse the "dwindling spiral" into "MEST," or so the idea went.

During the 1954 Phoenix Lectures, Hubbard couldn't resist depicting himself as being responsible (by implication) for the arrival of the Vedas on Earth, and at a much earlier date than usually recognized:

"It does happen that there are a set of [Vedic] hymns which as I recall were introduced into the societies of earth in about 8212 BC."

The next year, Hubbard wrote The 'Hymn of Asia', where he depicted himself as the re-incarnated Buddha. According to John Sanborn, this was a less than serious ditty, written, as a lark, for a convening convention of Buddhists.

Apparently the Buddhists were not impressed.

(During 1955, Hubbard also wrote his - meant for Scientologists' eyes only - "ruin utterly" and "always attack" 'Manual on Dissemination of Material', and also the fraudulent 'Russian Textbook on Psycho-politics' where he depicted Scientology as a target of the Russian Communists.)

By 1961, in a lecture (23 June 1961), Hubbard was denouncing Buddhism as a control mechanism devoted to keeping people quiet. Speaking of Buddhism, he explained:

"And of course, how quiet can you get? Dead. And you just might say, it's a covert effort to kill everybody off."

Yet, there was a back and forth on this, as Hubbard, when emphasizing his "religion angle," would abruptly mellow on ("wog") religions and become appropriately tolerant of them - when it suited his purposes.

Meanwhile, the 'Hymn of Asia' collected dust in a file cabinet or in a box somewhere, until, in the mid 1970s, it was revived and published.


An enormous Hubbard, attired in Buddha gear, floats beside the Earth.

I can be addressed
But in our temples best
Address me and you address
Lord Buddha.
Address Lord Buddha
And you then address
Metteyya. 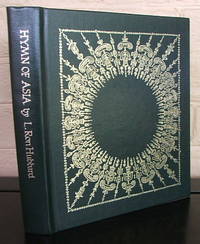 Like Aleister Crowley, Hubbard had a general disdain, at a gut level, for Buddhism. (Crowley regarded Buddha and Buddhists as wimps, preferring men of action.)

The last known expression of that disdain from Hubbard was during the Dianetic Clear frenzy, of the late 1970s, when some Scientologists, certain that they had "gone Clear" as disciples of the Buddha (of course, believing Hubbard to have been Buddha, thus making it OK), were rebuffed by Hubbard when he told them, in no uncertain terms, that one "does not go Clear by garbage eating," i.e. by having been Buddhist monks (with begging bowls.)

Looking beneath Hubbard's various expressions of the religious cloaking PR, prior to his activation of the "religion angle," one finds Hubbard speaking to nascent Scientologists during the 1952 'Philadelphia Doctorate Course':

"Our whole activity tends to make an individual completely independent of any limitation... Old Aleister Crowley had some interesting things to say about this. He wrote 'The Book of the Law'." 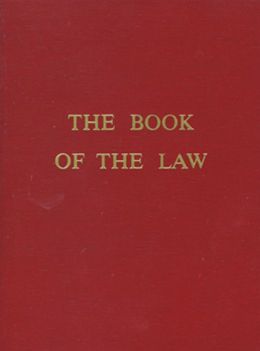 All editions of 'The Book of the Law' are blood red,
which is, oddly, also the color of the 'Tech Volumes'.​


From Crowley's 'Magick in Theory and Practice':

"The whole and sole object of all true Magickal training is to become free from every kind of limitation."

More from the 'PDC':

"The old magical cults of the 8th, 9th, 10th, 11th, and 12th centuries in the Middle East were fascinating. The only modern work that has anything to do with them is a trifle wild in spots, but a fascinating work by itself, and that's the work of Aleister Crowley... He signs himself 'the Beast', mark of the Beast 666..." During the Philadelphia Lectures of late 1952, was at the very beginning of the first lecture, Hubbard made an odd, non-sequitur, joke about being "the Prince of Darkness."

It would be over thirty years before Hubbard's 'Affirmations' - written six years before the 1952 'PDC' lectures - and Hubbard's taste for "slaves," as expressed in those 'Affirmations', along with the truth behind his many bogus biographical accounts, was revealed in a Southern California courtroom.


L. Ron Hubbard saved the Australians from the Japanese!​

"In 1942, as a senior US Naval officer in Northern Australia by fluke of fate, I helped save them from the Japanese."

"Remember I know Anzo. I once had a big share in saving its bacon from Japan. Note please that a small Jap force could have taken the lot and didn't. A handful of us, months before the coming of US troops, worked like mad to balk the Japs and change their minds."

From the court transcript of Armstrong vs Church of Scientology​

The Church of Scientology called one Captain Moulton as a witness.


Q. [by Michael Flynn, Armstrong's attorney]. He told you he was injured by a Japanese machine gun?

Q. What did he tell you?

A. That he had been in [Java] at the time the Japanese came in...

Q. So you believed Captain Hubbard at the time?

A. Certainly, I had no reason not to.

Q. Did he tell you exactly where he had been hit by machine gun fire?

Q. Did he [Hubbard] have any bullet wounds in his back?

In the 1950s, Hubbard told Scientologists:

"By 1948, through my own processing, and the use of principles I had isolated up to that time, was able to pass 100% combat physical..."

From Hubbard's 1946 self-hypnosis writings, as read into the court record by Gerry Armstrong at Armstrong vs Church of Scientology:

"You stomach trouble you used as an excuse to keep the Navy from punishing you. You are free of the Navy. You have no further reason for a weak stomach... Your ulcers are well and never bother you. You can eat anything. Your hip is a pose. You have a sound hip and it never hurts.Your foot was an alibi. The injury is no longer needed. It is well. You have perfect and lovely feet... When you tell people you are ill, it has no effect on your health. And in Veterans Administration examinations you will tell them how sick you are. You'll look sick when you take it. You'll return to health one hour after the examination and laugh at them. No matter what lies you tell others, they have no physical effect on you. You never injure your health by saying it is bad. You cannot lie to yourself..."

Mr. Flynn: "I'd be happy to have the whole document [all the 'Affirmations'] go into evidence."

"Your writing has a deep hypnotic effect on people and they are always pleased with what you write... Your psychology is true and wonderful. It hypnotizes people. It predicts their emotions, for you are their ruler."

​
You must log in or register to reply here.

Crazy Wisdom: Incarnations of the Avadhoot

Your Purple Hearts will tell on you...