Little David said:
How do you know Trey Parker and Matt Stone wouldn't have wanted and been delighted to keep Chef in the show and continue to have paid Isaac even if he couldn't do any voices etc. for the show? I'm sure they could have found someone who could have come close enough to the Chef/Isaac voice.
Click to expand...

They could have but Stone and Parker for whatever reason cut out other favorite characters from past seasons. Like Miss Choksondik, Mephisto and Jimbo.

I'm glad to learn the truth of why Isaac Hayes left South Park. Until now I thought it was Hayes choice to quit South Park because it dissed his religion. I had no idea he had a stroke and was further unable to perform the role. My respect for him has been restored and I'm disgusted by the cult's machinations and lying to make the cult look like it was being persecuted.

The Esquire article was republished with the following headline:

Helena Handbasket said:
The point is, either way, he had to leave the show. Same outcome = it doesn't matter why.

In addition to what I said before, above, I'll add that the official representatives of Isaac Hayes believe it matters. Perhaps we should take their word for it. 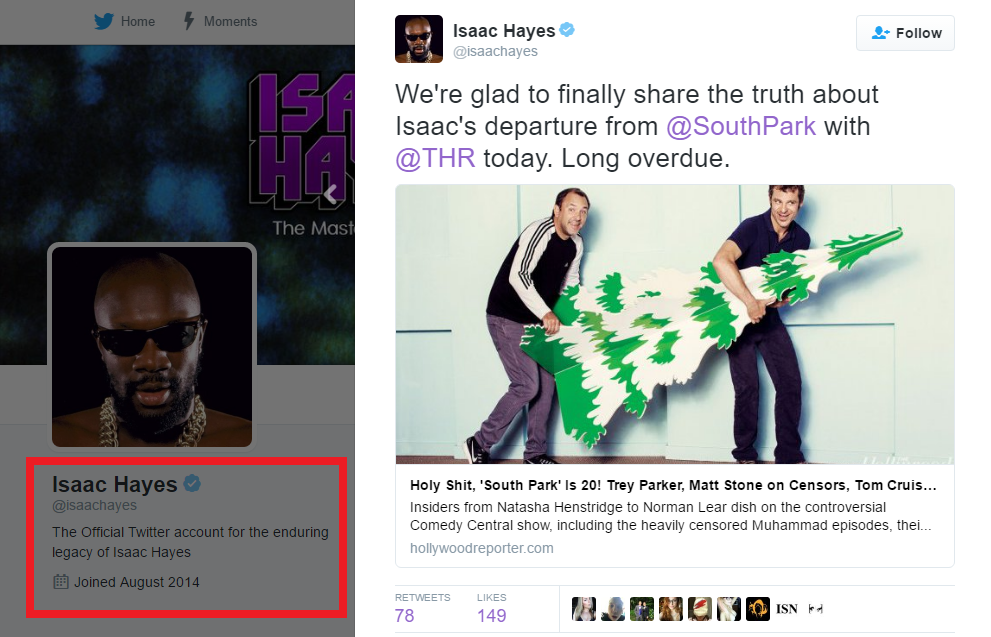 15 Actors Who Regret Being On Iconic Sitcoms

South Park is known for pulling no punches when it comes to, well, everything. That includes sensitive topics like religion.
That’s why it was so surprising that after 10 years voicing Chef on the show, Issac Hayes upped and quit after an episode insulted Scientology.

In the episode “Trapped in the Closet", Stan is portrayed as the long-awaited reincarnation of the church’s founder L. Ron Hubbard.

The actor said in a statement: "There is a place in this world for satire, but there is a time when satire ends, and intolerance and bigotry towards religious beliefs of others begins. As a civil rights activist of the past 40 years I cannot support a show that disrespects those beliefs and practices."
Of course, creators Trey Parker and Matt Stone were quick to respond, with Stone saying: “This has nothing to do with intolerance and bigotry and everything to do with the fact that Isaac Hayes is a Scientologist and that we recently featured Scientology in an episode of South Park. In 10 years and more than 150 episodes Isaac never had a problem with the show making fun of Christians, Muslims, Mormons and Jews."

After Hayes departure, Chef was kwritten off in a brutal fashion that included being struck by lightning, stuck on a branch, shot, and attacked by both mountain lions and a grizzly bear.

they forgot Isaac was brainwashed and chased to his death by a CULT..
only to be Frankenstein'ed and Stuffed in an Iron Chef suit.

Talk about shooting yourself in the foot.

One of the most respected (with teens at least) comedy shows in the world and you have an actor as a regular.

That is the exact image that I would prefer to see of a Scientologist. To use a cliché....someone who was cool.

The episode in question was a bit off the track, many more insightful and real examples could be made of the staff, without heading off into stuff that most Scientologists have little interest in.

It sounded a bit like some attempt was made to dissem to Matt and Trey which didn't go so smoothly as hoped.

with Handlers like Alfreddie Johnson arranging a phony title of KING

while they pilfered his Burger King residuals

Isaac Hayes given the shaft

30 Most Outrageous Sell-Ebb Feuds ~ Tom Cruise is in 2!

Article on Scientology in this month's Sientific American