Jason Lee quoted as saying he does not practice Scientology

Jason Lee quoted as saying he does not practice Scientology.

Jason Lee lives in Denton, Texas. He was interviewed by a local Denton blog, The Detonite. The relevant excerpt is below. For reference,
Ceren Alkaç is his current wife.​
The Detonite: Checking In With Jason Lee

Checking In With Jason Lee

Jason Lee and his family have been living in Denton for a little over a year now, and we thought it’d be swell to check in with him, see what he's been up to.

The Dentonite’s Art Director, Shaina Sheaff, went to visit Lee at his studio earlier this week to take his portrait. The two of them had met and talked briefly one time before. I watched them work together to create the frame for the portrait, and it was so refreshing. When Sheaff realized her camera was not working properly, Lee readily offered his up for use.

“It's the absolute worst feeling to have your Land Camera poop out as you're going to photograph someone who is a master of film photography,” Sheaff says. “Jason could have easily supplied us with any number of stellar portraits of himself to use. Instead, he handed me his camera - loaded with his film.”

“He took the time to help make sure I got the shot and that it was done right,” Sheaff says. “The kindness and generosity he showed in doing such a simple thing spoke to me. I truly believe we need more people with that kind of heart here in our creative family in Denton. It's an honor to be invited into the workspace of an artist you admire. It's an even bigger treat to have them take the time to help you create something that isn't mediocre.”

At any rate, Jason Lee is doing some really cool work around town and wants to continue to work in and bring great things to Denton. Here's what he's been up to:

TD: Tell me your experience as 1/5th owner of Barley & Board? For the record, what other businesses do you own - even partial stake in - around Denton?

JL: I was asked by Pulido and Sparky if I wanted to help co-design Barley & Board and of course I said yes. It's such a cool space, and one that has certainly helped bring life back to the square, along with a lot of other cool things that are happening around downtown. Lots of good people here trying to contribute to bringing some energy back to downtown, and I think what guys like Sparky are doing to invest in his hometown is amazing. Revitalizing old spaces and giving them new life is definitely a positive thing. 'Progressing while preserving Denton' seems to be a theme here.

You see a lot of that here; locals investing in the heart of this place. It's a beautiful thing, especially considering how much Denton's perimeter is being overdeveloped. Bearded Monk is cool, and the food truck scene behind Eastside, Oak Street Draft House, Harvest House, Paschall Bar, 940's, LSA, Denton Skate Supply being at the old Gulf Station, Denton Camera Exchange, the film photography scene, Denton Music Workshop, the record stores, the music festivals. All the murals around downtown. All good stuff to experience. There's an energy here now. When I first started coming to Denton in 2004 the square was all but dead. It's nice to see people out and about and in what feels like a very new way. I think Denton is benefiting from it.

Aside from my small slice of B&B, I have no ownership in any other businesses. While I'd be happy to take credit for these amazing places, I don't in fact own West Oak Coffee Bar, or Earl's, or 940's, etc. And I have nothing to do with Rubber Gloves or any other venues or businesses closing down. If Ceren and I had an idea for a business, it certainly wouldn't happen at the cost of someone else's. And being that we don't practice Scientology, and that we aren't particularly interested in opening religious centers in general, we have no plans to open a Scientology center. Quite a few rumors about me/us floating around but none of it's true. We're not here to buy up or change or take over Denton, put some kind of personal stamp on it. We're just here like anyone else who wants to be a part of Denton's very cool creative community, and to be involved and perhaps help where we can. 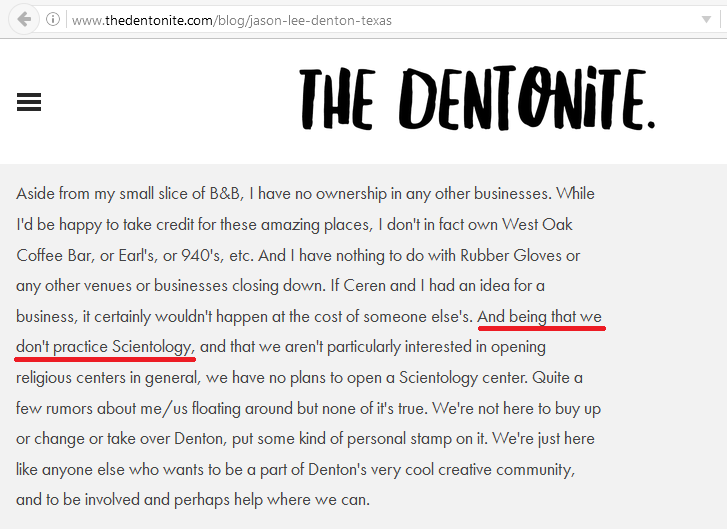 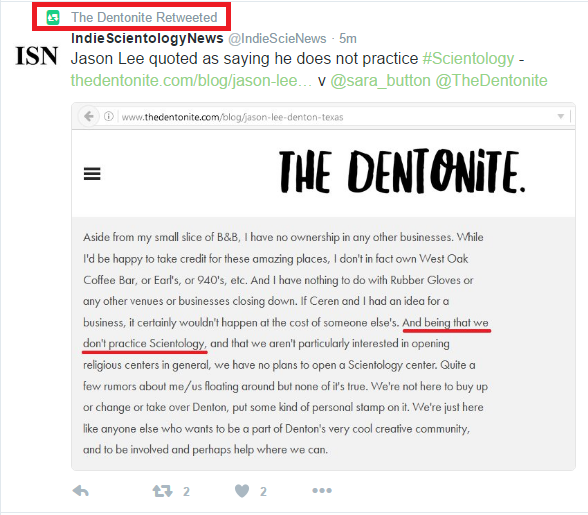 OMG!!! This could turn into some fabulous entheta!

The author of the article, Sara Button, also retweeted a story with the above headline. 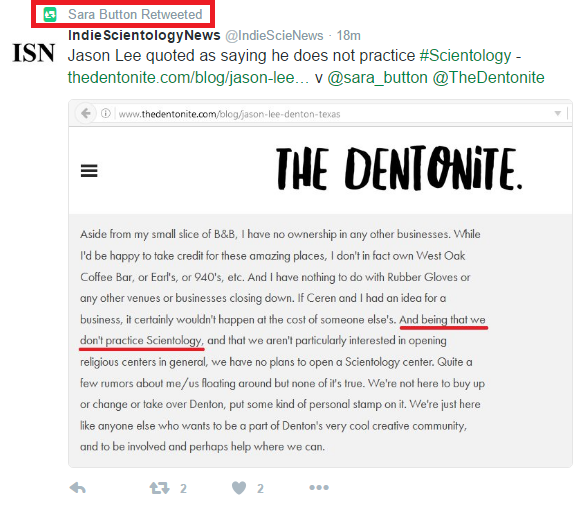 WildKat said:
His comment about not practicing Scn and having no plans to open a Scn center seems a little out of the blue don't you think? Why would he bring that up? Weird.
Click to expand...

I think the key may be his statement, "Quite a few rumors about me/us floating around but none of it's true." He may have heard rumors that he was going to open up a Scientology center, and he wanted to put them to rest even without being asked.

The Dentonite retweeted a Tweet by Tony Ortega that had a stronger headline.

Tony Ortega now has the story that Jason Lee is out of Scientology.

In our April story about Lucia Ribisi, our source who is close to that family told us that not only is Lucia out of Scientology, but so is the actor Jason Lee — which is part of why he moved last year to Denton, Texas, to get away from Scientology’s influence. (There’s something about Texas and exes.)

Today, The Dentonite blog quotes Jason confirming that he’s out:


If Ceren and I had an idea for a business, it certainly wouldn’t happen at the cost of someone else’s. And being that we don’t practice Scientology, and that we aren’t particularly interested in opening religious centers in general, we have no plans to open a Scientology center.
​
We had some interaction with Jason several years ago, and he expressed a willingness to talk to us then. Hey, Jason, drop us a line! Let’s talk!

Awesome. I look forward to hearing his story.

I always wonder what the last straw was.

Is "I don't practice Scientology" enough to earn him a "the Truth about Jason Lee" website?
Last edited: Sep 17, 2016

TexasLurker said:
I always wonder what the last straw was.

Is "I don't practice Scientology" enough to earn him a "the Truth about Jason Lee" website?
Click to expand...

Well, it's enough to get him expelled or at least summoned to ethics for publicly disavowing Scn.

With Jason Lee out, what does it mean for Scientology’s tightest celebrity clique?

Tony Ortega has a follow-up story:

With Jason Lee out, what does it mean for Scientology’s tightest celebrity clique?

The excerpt below may provide information regarding what may, or may not, have been behind Jason Lee leaving Scientology.

Jason, 46, and his second wife Ceren married in 2008. They were rumoured to have split last year, with reports that his commitment to Scinetology had come between them.

However it appears the two are now back together, and living with their children in Texas.

RadarOnline.com can reveal that actor Jason Lee and his wife Ceren have turned their backs on the religion they once championed alongside Tom Cruise, Kirstie Alley and other diehard celebrity Scientologists.

“We don’t practice Scientology, and that we aren’t particularly interested in opening religious centers in general, we have no plans to open a Scientology center,” Lee confessed to The Dentonite, a blog covering issues in Denton, Texas.

The following excerpt contains more information that may, or may not, help explain why Jason Lee left Scientology.

In 2008, Jason Lee married Ceren Alkaç, who does not practice Scientology. The couple have two children -- a daughter, Casper, and a son, Sonny -- who are believed to have been baptized in an Episcopal church.

The same hint, noted above, concerning why Jason Lee may have left Scientology:

The “My Name Is Earl” star and Alkac married in 2008, but there were rumours of a split due to Lee’s devotion to the controversial religion. The pair have since made ameds.

The following story does not provide any new information, but is long and provides a lot of background information.

Carmen Llywelyn responds to the news her ex-husband Jason Lee has left Scientology.

Anybody know what camera this is? I understand Jason shoots Polaroid, so perhaps he is shooting 8x10 polaroid? Impossible makes film in that format Like all of us - Jason Lee is pissed and he wants to talk but the programming is a bit too deep in his DNA by now...so it will come out - slowly and sideways....

Side effect of Scientology.

Look at Lisa Marie - came out with a song about Scientology when she left.

Then - she delivered a delicious blow by making sure the private investigator's that were caught with their weapons of mass destruction interogations (sec checks) by the Wisconsin West Allis Police Dept were BPI!!

Can't wait to see what Jason Lee will do - to deliver his blow now that he is OUT and has announced it to both sides. If you don't deliver some type of blow - you will never get out of Scientology. You must impinge upon your own subconscious mind to get yourself out of the 'think".

It takes a lot of work and mindfulness about what the hell you allowed in your mind.

It will be circuitry firing off and it will show up Scientology unless one deprograms.

Another article indicating that Jason Lee may have left Scientology to save his marriage, but with a bit more detail.

Even though Jason Lee assures Denton that he’s left the Church of Scientology for good, rumors were reported last year that his commitment to Scientology also split up his second marriage. Hubmesh actually reported in December, 2015, that Jason Lee and Ceren Alkac were divorcing after seven years of marriage due to conflicts related to Scientology. But Lee now appears to be living happily in Denton with his wife, Ceren, and their two children, Sonny and Casper. Lee says that even though there have been quite a few rumors about them “floating around,” they moved to Denton to be involved and help where they can.

Jason Beghe: 'Scientology is Not a Religion'