HelluvaHoax! said:
I once had a goal to find a way to make Three Card Monte morally acceptable.

I believed it was possible to do, but I had to hack a whole bunch of shit out of it.

First I took away the Monte dealer's cardboard box. But he kept playing, down on the sidewalk. 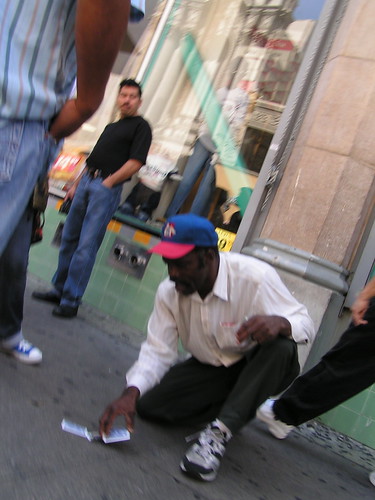 ​
So then I realized that the why was his cards. So I took away his cards, too.

To not let his stats crash he used his gun and jacked my wallet.

But, I am feeling pretty good that I salvaged that being and helped put ethics in on the card game industry--on this planet.

(helpful hint: if you end your sentences with "on this planet" you can get a Scientologist to agree to anything!)
Click to expand...

The Great Zorg said:
You mean the old man is still alive? Wow!

OK, I'll 'fess up! I have him living in a shack in the backyard. Yup. I feed him booze and pick up some bennies for him every now and then. He has power to the shed and uses it to "run" his own nonsense on himself. I hear him howling every now and then. He keeps screaming something about broke and a miscarriage of something or other. Dunno. But there he stays, surrounded by an imaginary electronic security blanket.
Click to expand...

By golly that is a broad definition of "drop".

However I was thinking of something a little more drastic.

Something that Agatha Cristie or Alfred Hitchcock might appreciate.

When and where was this picture taken?
Z

FoTi said:
When and where was this picture taken?
Click to expand...

Many months ago when Marty and Mike were in London. You can probably find a link to the picture of Mike with a lapel microphone.

Zinj
You must log in or register to reply here.

This story is about Marty Rathbun, by Jesse Prince