Translation of a Russian article posted on August 21, 2019 on time.kz (Kazakhstan):

Despite the fact that, as far back as 2012 in Kazakhstan, the Church of Scientology was unable to re-register and was effectively outlawed, people continue to suffer from its activities. A once financially successful married couple from Karaganda that trusted representatives of this organization lost 120 thousand dollars and now lives in debt and on loans. They are also facing the psychological aftermath of dealing with followers of Scientology.

"The brainwashing is powerful! By the time you begin to understand how you're being deceived, it's too late," Igor, a resident of the mining capital, says bitterly.

In 2008, his wife Olga, on the advice of an acquaintance, and out of curiosity, visited the local Dianetics center. From then on, the couple's prosperous life disintegrated. They sold their restaurant and lost the impressive savings they had in their bank account.

According to Olga, it all started with a casual acquaintance with the saleswoman of a boutique where she bought jewelry. The merchant persuaded her to visit "this very nice place that helps people solve family and business problems." The persons Olga met there were friendly, and they suggested she take the so-called Oxford test. After completing it, she was generously praised for her high intellectual scores and urged to develop her abilities. She was thus gradually drawn into the wondrous world concocted by Scientologists to extract money from duped newcomers.

"Everything was presented so beautifully! After brainwashing my wife, they gradually brainwashed me," recalls Igor. "There were persistent calls: every hour or two, different people would call us. They would wake us up at night and talk sweetly about the prospects that would open up for us after taking a few development courses. They promised we could buy a house in America on the Miami coast for 25 thousand dollars. They assured us they would open our third eye and teach us how to leave our body, so that we could improve our life and get rich."

But attaining the ultimate objective was not a simple matter. First, they had to pay for training at the local level and purchase educational literature. In addition, it was mandatory to buy, from a person with the status of auditor, substances that supposedly contained beneficial vitamins.

“They were white, yellow and gray capsules, and they were stored in the auditor's office in unlabeled transparent bags,” Olga says. "Sometimes after taking them, I felt physically ill, but for my Scientologist 'friends,' it was just an excuse to prescribe new rundowns [programs that lead to a certain result; for example, one procedure supposedly provides freedom from the harmful effects of alcohol, drugs, and medicine. -Author] or auditing [one-on-one communication with a Scientology consultant that can be considered a form of hypnosis. -Author]."

"I also tried the capsules," Igor admits. "I don’t know what exactly was in them, but they instantly made me feel hot all over, and then I was messed up for a couple of hours! Such a reaction can't be due to vitamins."

Nevertheless, the couple, lulled by the sham amiability of the followers at the Dianetics center, continued to associate with them. In 2012, Olga was invited to join the International Association of Scientologists and to go study in the United States, where she would supposedly gain the best knowledge. She thought about it for a long time — about two years — and then simply had to agree to the trip because, to her surprise, funds were transferred from her credit card to the American Scientology center in Clearwater.

"One day, we went out to buy a TV. At the store's checkout counter, we unexpectedly learned that the purchase failed, because there was no money left on my wife’s card," says Igor. "We asked the bank for a statement and discovered that the transfer to the USA occurred right on New Year's Eve! As a result, we suddenly lost 55 thousand dollars. We had this amount after the sale of our restaurant, and our intention was to buy a new business. We then realized that it’s not for nothing that Scientologists collect complete information about people: blood type, history of childhood illnesses, and bank card numbers, along with pin codes. They basically forced Olga to go to America by brazenly withdrawing money from her account. When we tried to straighten it out, they began to convince us that it was better for her to take courses, otherwise the fees paid would be lost. Nobody was willing to return funds that went abroad. But they helped willingly to obtain visas and airline tickets."

Olga spent four months in the United States. At first, she hoped to take the promised "Super Power" course. She was told that, after this course, she would easily learn to leave her body and, from America, she would be able, for example, to fly in this unusual way to the Karaganda region and find out how things were going there. But first (as she found out only after arriving), she had to undergo a purification program.

"The procedure involved taking a huge amount of those 'vitamin' capsules and staying in a sauna for five hours a day," Olga said. “And then I was subjected to a security check.”

According to the couple, this test would be the envy of even the most sophisticated intelligence agencies. It pries into a person's entire background, including his or her past, family and friendships. If the information reveals that a relative worked in law enforcement, then the applicant for the Super Power course is immediately rejected. However, there are also other reasons for this screening.

"After four months at the American center, I was issued a 'non-enturbulation' order, meaning that I am a suppressive person. The authorities ruled me ineligible for self-development and released me to go home," says Olga. "But in fact, I became unnecessary to them, because the money fraudulently transferred from my card supposedly ran out. Up until that moment, I had been under constant control and psychological pressure from one of the staff members, and I was so tired that I was glad to return to Kazakhstan as soon as possible."

For a long time after her return, Olga was in a depressive state. Her husband notes that she became nervous, irritable and dispirited.

"But most importantly, we finally realized that we were victims of fraud. We began to get a grip on reality," says Igor. "We noticed that people in Dianetics look down on the people outside. They call them 'bishara' [pejorative Kazakh word -Translator's note]. In other words, if they were really successful, then they would dress and look after themselves better. And what is most interesting is that, having pumped out all our money, they seem to be less interested in us. But even to this day, invitations for various paid courses still arrive in the mail."

The couple says they spent 12 thousand dollars just for Scientology literature. For local training, they forked out one thousand five hundred bucks. The entry fee to the international association cost another five thousand. The trip to America cost a total of 70 thousand "greenbacks."

"Overall, we gave them about 120 thousand dollars. Now we have a lot of debts and loans, life has become much harder," says Igor. "Last year, we decided to file a complaint with the police regarding fraud. The investigator listened to us, but in his eyes I saw only emptiness. He said: if there had been a theft, a robbery, or another obvious crime, then the police could help. So it turns out that we are kind of to blame."

At the investigator's recommendation, Olga went through a psychological and psychiatric examination during which she displayed clinical signs of mixed anxiety depressive disorder and of dependent personality disorder. However, the investigation is being delayed.

"We believe that inaction by law enforcement plays into the hands of the Scientologists. Yes, their activities are now banned in the form of a religious association. But they disguise themselves as non-commercial organizations and continue to defraud people. And the enormous stream of money from people in Kazakhstan who fall under their influence is still flowing outside the country," the spouses complain.

Olga and Igor are presently establishing contacts with other victims in order to jointly spur law enforcement efforts. They hope to at least succeed in banning the dissemination of Scientology literature in Kazakhstan and to prohibit the use of suspicious methods and practices. They are ready to cooperate in every way with the investigation, if it resumes.

The names of the protagonists in this article were changed in the interests of a possible future investigation.
Last edited: Aug 23, 2019 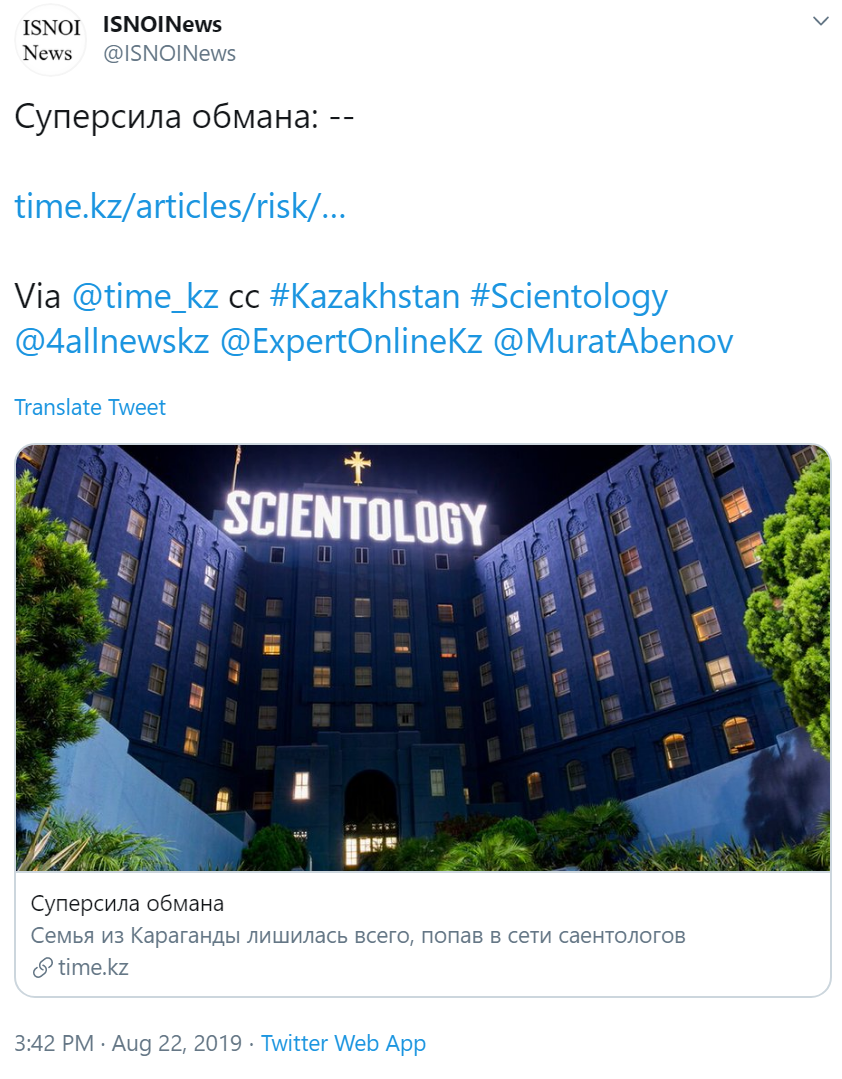 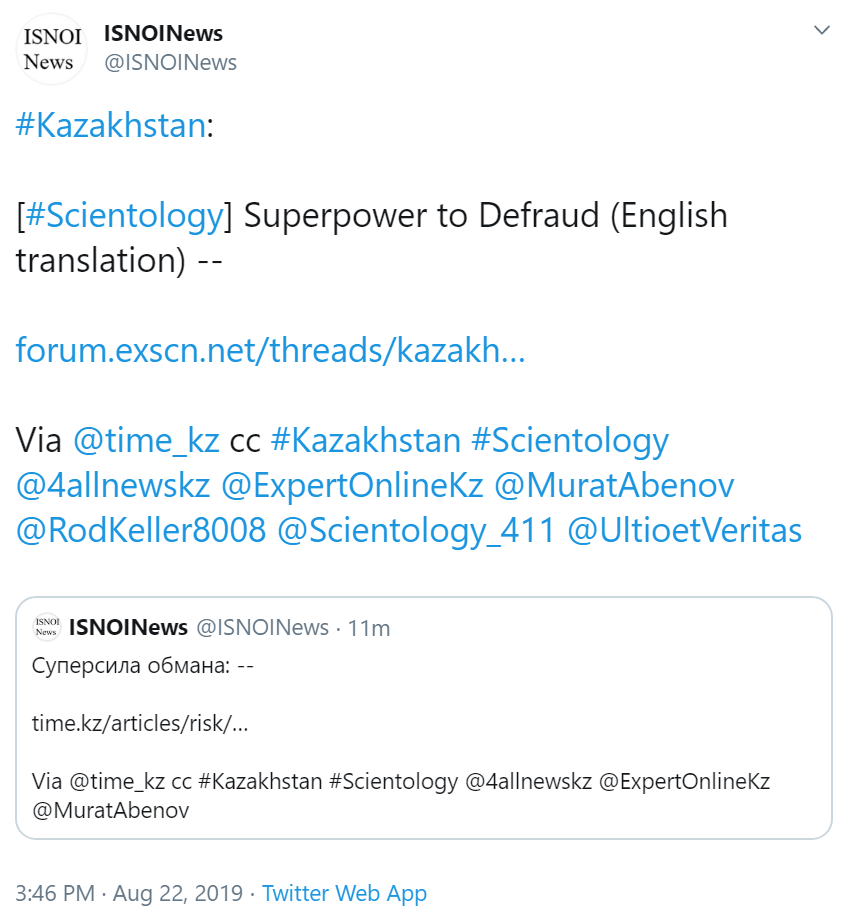 Thanks. Most interesting. I have a female friend from Kazakhstan who lives here. I'll send the original article to her.
It's an interesting country...

That transfer of $55K if via a card could have been refuted. If they actually did a wire transfer without their approval that would be a serious crime.
You must log in or register to reply here.