Wouldn't it be horrible to be so desperate to "not be wrong" about all of the promoting one's done to boast the sick "science" of the "mind" in the form of Scientology that one's "ser fac", to use Scientology to unravel Scientology, about it's total truth and righteousness and therefore vicariously one's own righteousness that one has to wear horse blinders so gargantuan to hide from yourself the mental illness you've been promoting and just can't ever stop promoting or face being SO FUCKING WRONG about what you've lured so many innocent people into? The pileup of ruined lives a Cruise or a Travolta is truthfully responsible for? What Hell awaits such social miscreants? Or do they think they can as is their own time tracks which exist purely so that no one can escape judgement when one's time before the judge comes? Whomever one consider that to be doesn't change for a moment who it will turn out to be. Maybe it's the collective pileup of one's true victims with God sitting beside them as judge, and not just those fraudulently claiming whiplash but those whose lives have truly been destroyed through feeding them to the monster and his minions. Responsibility is all theirs? Well you are about to find out aren't you boys? How many more decades of living high on the hog do you have? Can't you feel the end of your run coming? We all do.

Krustie Kiss and Tell ... one kiss and She was ready to tie the not
Alright Mr. Miscavige, I'm ready for my close-up"

Saying that she would have married travolta is stunning..it prooves they really live in a bubble out of reality.
She seems to be the only one who ignores THE ELEPHANT IN THE ROOM

she went on and on about how Fidelity was important to her Her..

Krustie and JT were married at the time. oops

was ready to let Fidelity fly away on Trovoltas Jet Stream

Scientology was only mentioned that one time when someone asked her about it and she refused to talk about it. For the rest of her time in the Big Brother house she was nice to people and made herself likeable.

In her aftershow interview she said her time on the show had "made me a better person". So this OT VIII has found that spending time with non-scientologists discussing anything but scientology has made her a better person. Well done Kirstie.

She has also shown scientologists everywhere that the way to win friends and influence people is to not mention scientology.

Kirstie today gives The Sun newspaper a major interview in which she tries to say that John Travolta isn't gay.

She also admits having gained 30lb in weight recently but she isn't concerned. This is an OT VIII who is grossly overweight because she stuffs herself with cookies and a year ago contracted a disease that caused her to spend most of her time lying in bed for 10 months.

What a great poster girl for scientology. 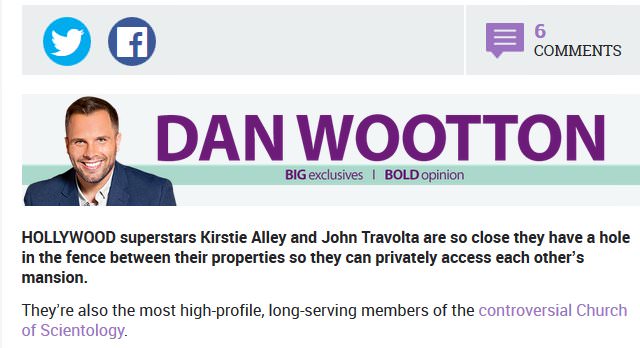 HOLLYWOOD superstars Kirstie Alley and John Travolta are so close they have a hole in the fence between their properties so they can privately access each other’s mansion that ...

Nevermind, you're not supposed to slag off people here unless it's the Fat Controller or Miscavige, so I'll edit my salacious comment, but you can use your imagination.
Last edited: Sep 17, 2018

I've always thought that she is Bi.
Kelly Preston, too.
They both have a Male 'flow' about them.


Birdcage! I loved that movie.

I saw Nathan Lane in something recently and he has aged really well ... he looks amazing.