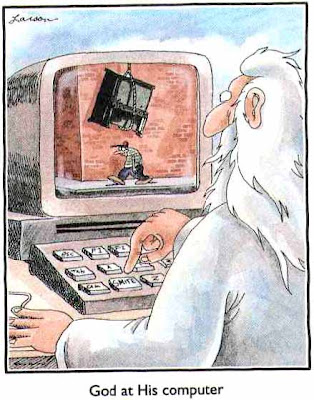 I can be addressed
But in our temples best
Address me and you address
Lord Buddha.
Address Lord Buddha
And you then address
Metteyya.

To me the most disconcerting aspect of Scientology is its dishonesty.

Scientologists will lie about almost anything having to do with Hubbard and Scientology. They'll lie to themselves, to others, and applaud ecstatically with floating Tone Arms while being lied to by other Scientologists.
Click to expand...


Not lies, never lies.
Reality adjustments. Bit by bit, slowly we slip over the edge.

Because reality is what is agreed upon. And if you can't agree with it then it's out-reality for you, or you are PTS-to-the-middle-class...

crm1978 said:
That will be bad news for the little dictator who is running the cult now. If LRH is back he is going to be pissed at the mess Miscavage has madeof things it would be real karmic justice if Hubbard tried to pick up a child body in a family that just got regged out of their life savings .Makes you wonder why the top OT in the universe (Hubbard) did'nt come back to claim the millions he stashed in Swiss banks .I guess that research into upper OT took longer then he planned on.
Click to expand...

Ol' dead windbag coming back to re-haunt the world, probably kept hittin' up the Sea Ogres wimmins, oopsy there, now likely sick of being aborted and karmatic pay-back, is living out his next incarnation as a ewe on some forgotten dental-floss ranch deep in the Montana outback.... Oh No - a Moonchild!


Now its okay to publicly engage in the mocking & ridicule of children?

Some people are simply devoid of either sense or kindness.

Mark A. Baker said:
Now its okay to publicly engage in the mocking & ridicule of children?

Some people are simply devoid of either sense or kindness.

The mocking and ridicule was directed at Hubbard, Cruise and thingummybob - whatever Cruise's wife is called. There are no children in that picture. Placing Hubbard in there was a joke.

Smilla said:
The mocking and ridicule was directed at Hubbard, Cruise and thingummybob - whatever Cruise's wife is called. There are no children in that picture. Placing Hubbard in there was a joke.

Tell that to the Cruise's and their child. It's an obvious photoshop of them with their daughter. Frankly, I find it to be disgusting and I'm not easily disgusted.


Tell that to the Cruise's and their child. It's an obvious photoshop of them with their daughter. Frankly, I find it to be disgusting and I'm not easily disgusted.

Well fair enough Mark, thanks for sharing your thoughts - your point is well made.


Tell that to the Cruise's and their child. It's an obvious photoshop of them with their daughter. Frankly, I find it to be disgusting and I'm not easily disgusted.

If L Ron Hubbturd came back - he is a "DUNG BEETLE" - a symbol in the Free Mason's! SCARAB - check it out. They are in the Masonic Temples - they like poop - and little Ronny Hubbturd liked it too - cuz he looks like a big TURD!
Scarabs were also employed as talismans and royal seals. The winged scarab (as illustrated below) was used in funeral rites. Rodman Clayson, author of Egypt’s Ancient Heritage–published by AMORC–wrote,
So-called heart scarabs, usually flanked with falcon’s wings, were funerary talismans. The heart scarab [made] of stone was laid upon the breast of the mummy, and this indicated that the guilty soul must stand in the judgment hall in the presence of Osiris. The scarab thus used was to secure exemption from the possible performance of an evil life.
AMORC–the Ancient Mystical Order Rosae Crucis–is a Rosicrucian society headquartered in San Jose, California. As a society based on many Egyptian mystical and esoteric teachings, AMORC generously employs the scarab symbol throughout much of their literature and ritual work. The two scarabs illustrated below are taken from AMORC sources.
Sir Wallis Budge, late keeper of Egyptian and Assyrian antiquities within the British Museum, gave a similar explanation in his important work titled Egyptian Magic, "…the scarab or beetle itself possesses remarkable powers, and if a figure of the scarab be made, and the proper words of power be written upon it, not only protection of the dead physical heart, but also new life and existence will be given to him to whose body it is attached."
The world of Egyptian magic has long been embraced by secret esoteric societies, including Rosicrucian orders, Freemasonry, Theosophy, and the Golden Dawn. However, placing one’s hope of a beneficial afterlife in the occult symbol of the Egyptian scarab–or in any of the ways or doctrines of Egyptian magic– is a spiritually bankrupt approach. Gadfly said:
If it were true, I wonder how DM would take the news??????
Click to expand...

If you'll try word clearing the meaning of " asshole ".

Walter Reed Army Medical Center Chief of Staff Dr. Rahm Wisenthal, released this incredible statement at a press conference this morning, at 11:59...Quote "As improbable as it seems, under secret Presidential order #198666 The United States Department of Scientific Research and Development, 'USRD'..confirms that American born citizen, Dr. Raymond Hahn,
Senior Fellow at the Livermore Laboratories, in Livermore California, is not only the DNA prodigy of Scientology Founder, L. Ron Hubbard, but sixteen
years in secret scientific trials and experiments, is determined to be L. Ron
Hubbard himself."

The White House released this statement, " President Obama is on his way to meet with Vatican officials who it is said, through back channels has called this announcement; "Heretical and of the enemy of all Christian believers and must be denounced!"

CNN Cairo reports, "riots breaking out all over the Muslim World since Aljezeera broadcasted the press conference live...Other reports unconfirmed say's, "Israel has it's Military on high Alert."

The attached USRD documents to the press release from Walter Reed state further; " Dr. Hahn was born 3 1/2 years after L. Ron Hubbard died in 1986...We have confirmed evidence and video documentation that Mr. Hubbard had far advanced and perfected DNA cloning for the specific pupose of proving when he reincarnated with full conciousness of his identity, it could be substantiated with science."

The report further said, " Dr. Hahn had been in our program since childhood when the Trustees of L. Ron Hubbard's 'Living Will & Trust' followed pre-arranged proceedures that began in 1984." According to Admiral Henry Orwell, U.S. Naval Research Laboratory, who also participated in the program, sources say was dubbed, " The Guardian Project."

" The child was beyond the scope of any scientific data as to his intellect, total recall of everything L. Ron Hubbard ever wrote and postulated." Said, Dr. Wisenthal, who was present at the first debriefing and examination of the child at six years old.

The childs mother was selected from among Scientology's highest ranks of spiritual and technical achievement.

" The chain of evidence absolutly proves that it is impossible regarding all the imperical evidence our project ammassed in sixteen years, that Dr. Hahn is not L Ron Hubbard." Concluded Dr. Wisenthal.

Church of Scientology officials will not comment until an emergency meeting of top Church officials, which is reportedly being held off the Florida coast on a U.S. Navel vessal, where Dr. Hahn is said to be " re-auditing them." A Scientology term for spiritual guidence.
Pandomonium broke out when DR. Wisenthal refused to take Questions, and was escorted away and the entire Walter Reed Medical Center has been cordoned off by military police.

This annoucement comes on the heels of Last weeks astonishing announcement made by the United Nations Security Council, that an International Treaty has been reached to facilitate the complete shutdown of the world's pharmaceutical industry and re-evauate the use of over 90% of drugs in the treatment of psychiatric diagnosed illnesses, and re-evaluation of Psychiatry as related to Medical Science.

These revelations are sure to send shock waves around the entire globe and the repercussions as to the possibility that this is scientific fact ,and the United States of America has officially authenticated it as so, is going to be world changing.
Click to expand...

and here is a photo of the newly reincarnated L Ron Hubbard:

Psychiatry and Psychology in the Writings of L. Ron Hubbard
2 3 4

Scientology's Hubbard has a fraud history

This Guy Claims to Be the Reincarnation of L. Ron Hubbard
2