It's almost 9pm and I JUST GOT HOME from the LA picket.
It was quite the Who's Who of critics: Tory and Mark, Graham Barry, Michael Pattinson, Astra and Lawrence Woodcraft, Blownforgood, John Peeler, Mark Headley, and many many more.

It was almost like a 3 ring circus, so much was going on at the same time. The Gay Pope shouted in the window of the Applied Scholastics building so vehemently that three squad cars and about 10-12 cops showed up (video to come). There were interviews and cupcakes and tons of honking, all the usual.

The funnest part for me was towards the end when the chartered buses arrived to take the Sea Org members over to the Shrine Auditorium for the Dianetics event. One minor problem: the doors were blocked by about 200 anons. It was hilarious to see them maneuver the buses around, as we ran back and forth from door to door. It literally took them close to 2 hours to get the people on the bus. Video to come.

Some nice anons gave us water and chips, and then got a $40 dollar parking ticket, so we raised the money to pay most of it. Then the cops got called on the same car because their license plates were covered. Some scinos turned them in, but the cops were cool.

All in all, a fantastic protest. I got to meet Sk8ter, and together we admonished the sea org members who trickled out with, "Mike Rinder blew, you can blow, too."

Administrator
Mark Ebner from "Hollywood Interrupted" at the LA protest.

Don't know who he is? Google him. 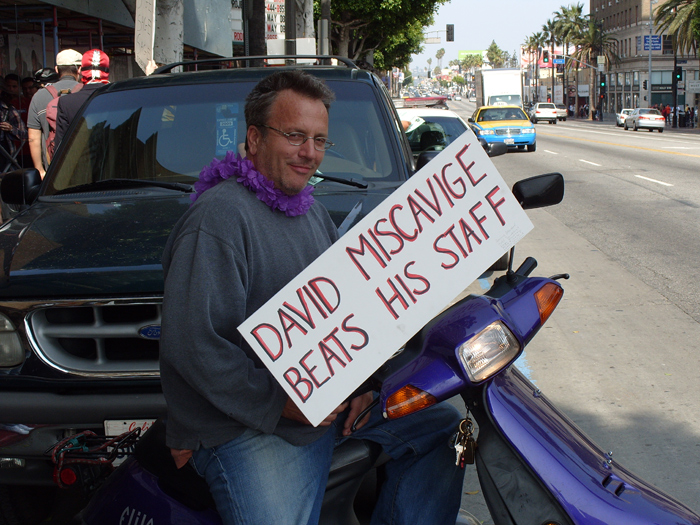 Teddy Mayett did solo pickets of LV for years. Hopefully he was around to watch

Zinj
You must log in or register to reply here.