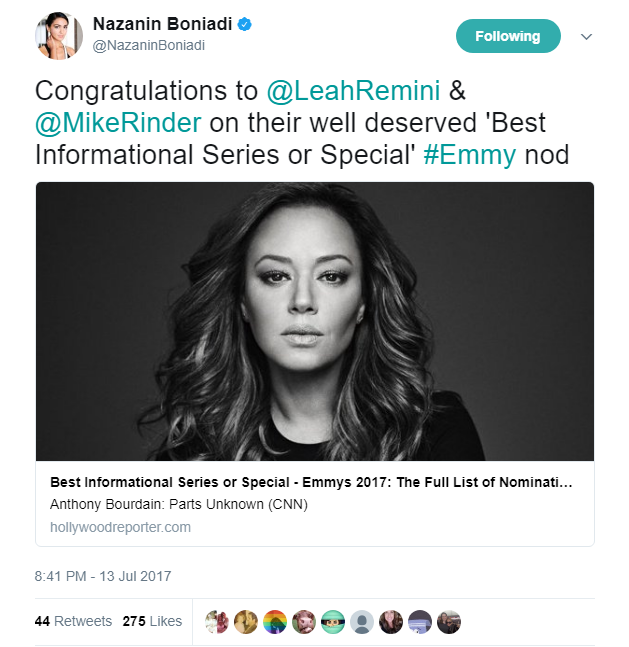 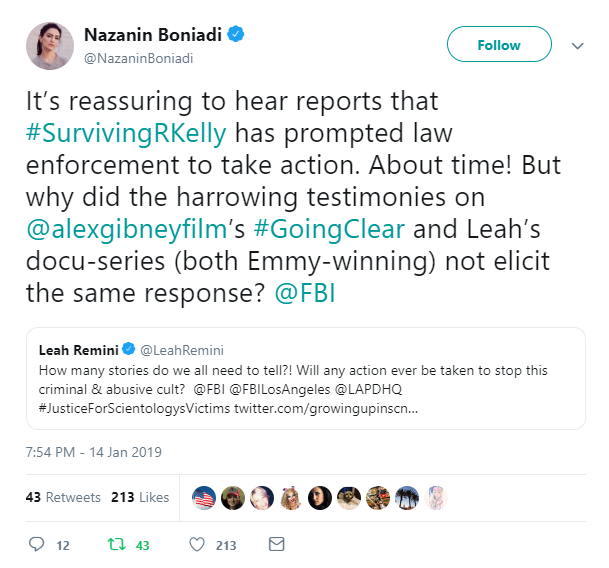 The Independent: Hotel Mumbai star Nazanin Boniadi: ‘We’re fighting for wage equality in the West, but compared to Iran, it’s a chasm’

The Iranian-British actor’s parents escaped an oppressive Iranian regime when she was just a baby, she tells Alexandra Pollard. Later, she escaped the indoctrination of Scientology and became a fierce human rights advocate

In truth, she is also known for something she would probably rather forget – Scientology. Boniadi was a member of the secretive, controversial religious organisation in the mid-Noughties, and was the subject of a 2012 Vanity Fair cover story, which claimed that she was recruited by Scientology to be Tom Cruise’s girlfriend.

But she has long since freed herself from the organisation’s grasp. Today, sitting perfectly poised in the tea room of a London hotel, she is willing to talk about it, but would much rather focus on her human rights advocacy, the culpability of those who enabled Harvey Weinstein, and her new film, Hotel Mumbai.

Ahead of the film’s release, Boniadi and I spoke about Iranian oppression, how the film was nearly scuppered by Harvey Weinstein, and why, since leaving Scientology, she’s realised that “there is nothing more beautiful and profound than realising who you are”.

You mentioned earlier wanting to understand extremism. You were a Scientologist for a long time. Did your experience breaking free from that make you more empathetic to people who are indoctrinated in other ways?

I think we all go through things in our personal lives that help shape how we feel about certain things. I think indoctrination… It's so funny, there is a parallel between theocracy, which is what my parents fled from in Iran, and other forms of brainwashing and indoctrination that might exist on a different, organisational scale. Clare, my character in [sci-fi thriller series] Counterpart, went through a metamorphosis of shedding the things that she'd learned and been forced to believe, or persuaded to believe were true, and to find herself.

There is nothing more beautiful and profound than realising who you are, and not relying on other people to guide you on how to think or who to be. And that was the journey for me that I found really cathartic: whether it's a theocracy or... something else, trying to shape you, or trying to oppress you, it's really important to find your inner strength and your resilience and your voice. When you're thinking, who is it that's doing the speaking, is it you, or is it something that you've been brainwashed to believe is you? It was, yeah, highly cathartic to me to play that role, and Justin Marks did an incredible job of using my personal history to guide season two.

Did you shed your own indoctrination suddenly or gradually?

It's very gradual. It doesn't happen overnight, but I think it's a process of self-discovery and finding yourself and what means the most to you. Part of my activism is informed by that, being a voice for people who don't have a voice. People deal with trauma, emotional or physical trauma, in various ways, and my way of dealing with... life in general, has been to use whatever I'm feeling to either perform in a role or to help other people. '

Entertainment Tonight serves as a mouthpiece for Scientology on Going Clear