Russell Miller's Barefaced Messiah and Bent Corydon's Messiah or Madman? are very different books. Each complements the other.

Messiah or Madman? was published first and, having been under attack, was rushed to print with an emergency cover:​ 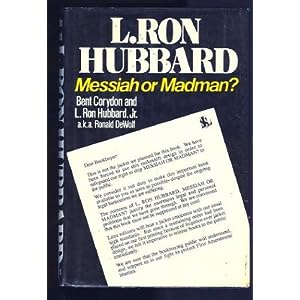 This is the cover of the expanded and updated 1992 paperback edition, and the 1996 further expanded hardbound edition. 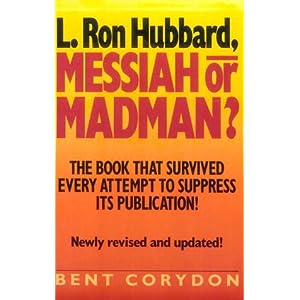 There is also a 2005 Russian language edition.

The cover for the 1988 audio cassette version of the book: 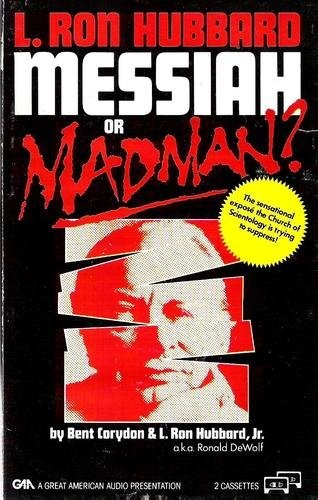 The intended cover for the 1987 first edition of the book had featured Hubbard's head flying out of an erupting volcano, but was stopped, by Scientology, by court order.

Messiah or Madman? was not really a biography as much as an examination - using an unorthodox format - of both Hubbard and Scientology, including, in detail, its ideas and methods, and their background.


Unlike most other books on Scientology, 'Messiah or Madman?' examines both the "positives" and "negatives" of the subject.


"I have high hopes of smashing my name
into history so violently that it will take a
legendary form even if all the books are
destroyed. That goal is the real goal as far as
I am concerned. Things which stand too
consistently in my way make me nervous.
It's a pretty big job. In a hundred years
Roosevelt will have been forgotten - which
gives some idea of the magnitude of my
attempt. And all this boils and froths inside
my head...
"Psychiatrists, reaching the high of the
dusty desk, tell us that Alexander, Genghis
Khan and Napoleon were madmen. I know
they're maligning some very intelligent
gentlemen."

L. Ron Hubbard wrote these words in a letter to
his first wife in 1938.

In 1950 he wrote the bestseller 'Dianetics, the
Modern Science of Mental Health. This inspired a
layman oriented mental health movement which,
ultimately, developed into Scientology, the most
profitable of the money-making new religions.

And P.T. Barnum appears to have been an inspiration.

Hubbard also took much from the writings of Aleister
Crowley - self-proclaimed "Beast 666." This is a source
of embarrassment for the Scientology Church, which
is determined to achieve broad public acceptance.

In the 1960s Hubbard incorporated Brainwashing
methodologies into the subject. He established the
"Fair Game Policy" which states that an "enemy" of
Scientology "may be deprived of property or injured
by any means by any Scientologist, without
discipline of that Scientologist. May be tricked,
sued, lied to or destroyed."

He also became the Commodore of his own private
navy, and began to refer to himself as "Source."

L. Ron Hubbard, Messiah or Madman? exposes
as never before the dark side of Scientology, yet
contains an in-depth examination of the potential
positives of the subject and their actual origins.
________________​

After over thirty years of trying, the CofS has failed to produce a serious, traditional, biography on its founder, settling for a "Ron Encyclopedia," which is a series of puffed-up coffee table books, consisting of some Hubbard essays and lots and lots of full page pictures of Hubbard. 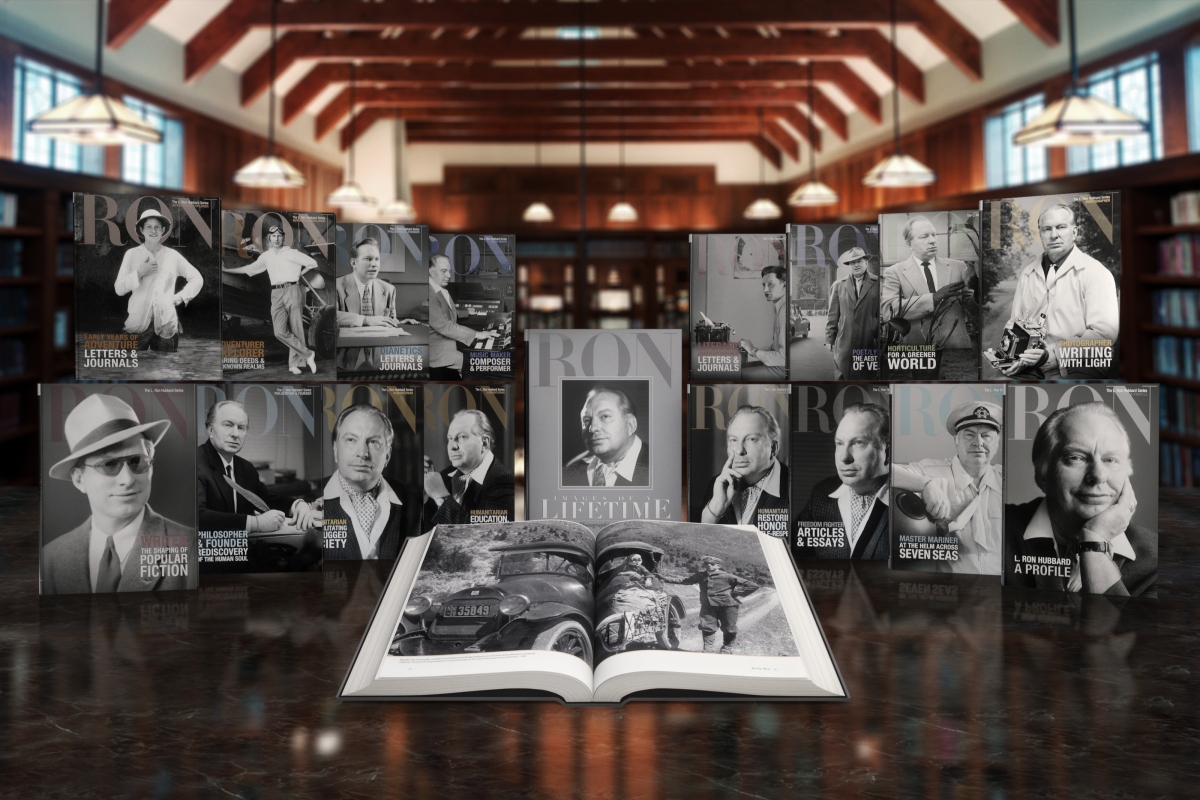 
This is the cover of the paperback version of Miller's paperback Bare-Faced Messiah from the late 1980s:

It is regarded as the best cover of all books on the subject.​

IMO, Bent Corydon woke up when he (his franchise mission) got screwed over by the CofS in the 1980s.

Not always but quite often, this is what has to happen for a member to wake up and ditch Scientology.
Finally, a person experiences the evil of Scientology and they get out.
Until that happens to themselves they just think others are just SP or PTS.

Not always but quite often, this is what has to happen for a member to wake up and ditch Scientology.


That's true, IIRC, both he and David Mayo, and many others, joined when they were teenagers.

When did you join?

No more new threads, so will add a little more content - mostly a few re-posts - to the ends of a few other threads. Excerpt from the 1989 David Mayo article on Clear. http://www.ivymag.org/iv-01-02.html (David Mayo is an Ex Scientologist, Class XII and former Senior C/S International, who knew Hubbard on the ship and, for a time, around 1978, lived at Hubbard's residence and worked with Hubbard):


"It was PR and marketing considerations that led Hubbard to decide that certain people were 'clear' at a certain point..."​

And from author Russell Miller's interview of David Mayo from August 1986.


"What worried me was that I saw some things he did and statements he made that showed his intentions were different from what they appeared to be... He told me he was obsessed with an insatiable lust for power and money. He said it very emphatically. He thought it wasn't possible to get enough. He didn't say it as if it was a fault, just his frustration that he couldn't get enough." ​
​
________
Background​
"This is a cold blooded and factual account of your last sixty trillion years," from the 1952 book, 'History of Man', found Hubbard telling others the contents of their minds, but it was premature "mind grope," just as the early 1950s e-meter reactions projected on the wall with shadows, while the audience went "ooh!" and "ahh!", was premature "Your e-meter will tell you"-ism, and the 1951 "no rights of any kind" was premature SP Doctrine, and the 1951 "dispose of quietly and without sorrow" was premature Fair Game Law and premature disconnection - disconnection in its most extreme form.​ 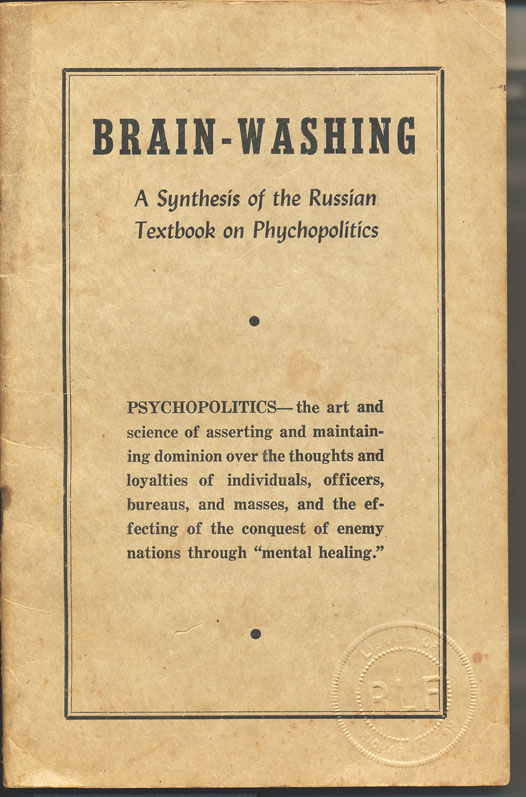 ​
In the mean time, Hubbard surrounded himself with those excited about his much advertised vision of a better world, and excited about the full releasing of spiritual ability.

Hubbard liked to write and he liked to lecture, and he had a knack as a practical psychologist. He drew on the ideas and innovations of the most creative of those around him, and drew on his own knowledge of abreaction (catharsis, "get it [buried thoughts and emotions] off your chest") therapy.

Movie scene illustrating a cult leader taking control of an other's mind by manipulative and exploitative use of catharsis.
_________________​ 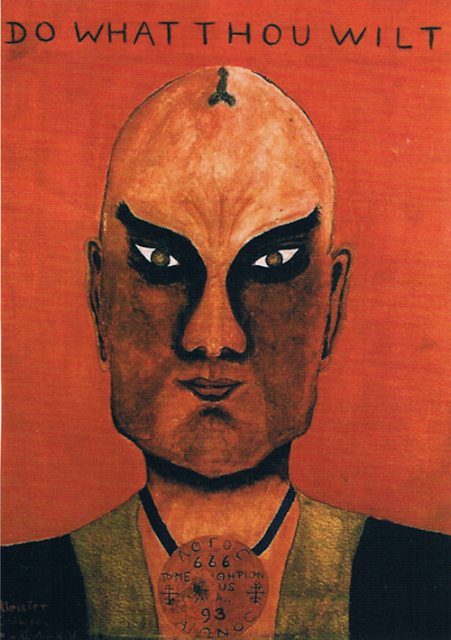 See Hubbard's "loose lipped" Philadelphia Doctorate Course of 1952, specifically lecture 18 (and other lectures), for his references to Crowley.​

Hubbard re-worked the (four 'letters' - ingredients - of the) Kabbalistic 'tetragrammaton', and it became his 'Four Conditions of Existence'. Hubbard rewrote Crowley's 'Naples Arrangement' and it became his 'The Factors'. He borrowed Crowley's idea of a multiplicity of infinite minds and further excited Scientologists with that notion. None of these were original with Crowley, who was as much a relay point as was Hubbard. Yet, unlike Crowley, Hubbard would eventually incorporate the methods of psychological warfare into his system, and used those methods, not only on his perceived enemies, but on his own followers.

And when he finally - in the mid 1960s - unleashed, mostly covertly, the psychological warfare methods of the "Russian Textbook" on Scientologists, he also returned to fully utilizing those ideas he had briefly tested more than a decade earlier. He gave them a past, he gave them a future, he told them the contents of their own minds, and made it plain that only HE knew, and others were going to be told.

Scientologist were overjoyed as they knew that "Total Freedom" and "Total Power" awaited them. (The science fiction aspect of these materials has drawn the most attention but, perhaps, more important was the switch from (seemingly) harmless pop psycho-therapy to covert hypnosis.)

Hubbard had done this in 1952, but now it was formalized and institutionalized, and a senior part of the doctrine of Scientology doctrine.

Concise look at the multi-layered Chinese finger puzzle of Scientology" Ex Scientologist - The Scientological Onion with a link to what has been called the "blueprint for Scientology."

Veda said:
That's true, IIRC, both he and David Mayo, and many others, joined when they were teenagers.


I was about 20 years old and that was before the internet.

programmer_guy said:
I was about 20 years old and that was before the internet.
Click to expand...

Your brain was undeveloped too.

We were all at a disadvantage because of our young age. Bare-Faced Messiah Going Back Into Print
2

Russell Miller's Bare-Faced Messiah, Back in Print in February!