“Do I Look Brainwashed To You?” – Louis Theroux’s My Scientology Movie (Film Review)

Vulture Hound: “Do I Look Brainwashed To You?” – Louis Theroux’s My Scientology Movie (Film Review)

Of all of the Louis Theroux canon to date, my favourite of his contributions to journalism is his description of BBC reporter John Sweeney going “shouty-crackers” when continually hounded by Scientology members when filming a documentary about the church. You can imagine my excitement upon finding out Theroux was to take on the church in a documentary of his own.

One of Theroux’s greatest skills as a documentary maker is to present the blackly comic aspects of his subjects, to draw out the funny side, without making light of their essential moral and intellectual wrongness. Also, his commitment in attempting to portray his subjects as real people with good intentions, is never more apparent than it is in this film. Theroux is continuously thwarted by a high-ranking church member, Catherine Fraser, as he attempts to film outside one of the church’s buildings. Coincidentally, Fraser happens to be the ex-wife of Jefferson Hawkins, one of the contributors to this documentary and author of Counterfeit Dreams, a book about the church and his defection from it. Hawkins, when asked by Theroux, says his ex-wife is “trapped in a not-good system” but knows she is a “good person at heart.” And that’s probably the perception of Scientology most accurately conveyed in this film – well-intentioned people tricked into working for an organisation with a heart of darkness. As funny and ludicrous scientology may seem to us (and is), it has ruined the lives of real people trapped in its beliefs and there are some who may never get out.

Victoria said:
Is it even a religion in Ireland?
Click to expand...

Louis Theroux My Scientology Movie out on DVD in UK. 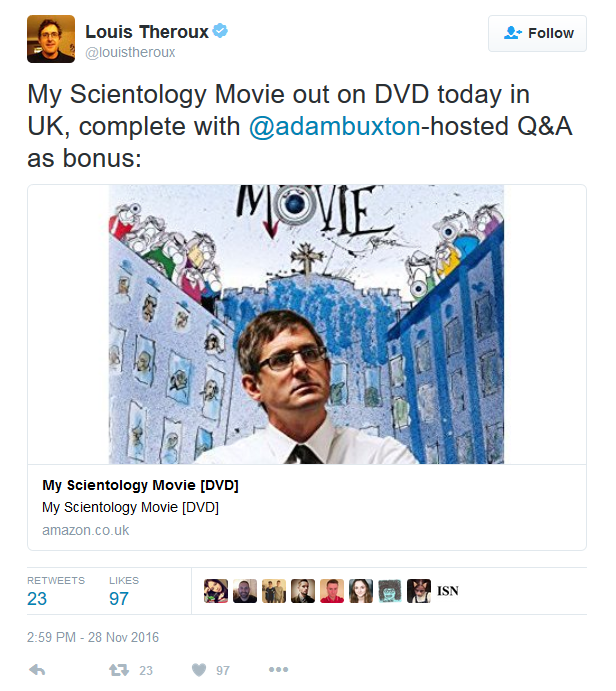 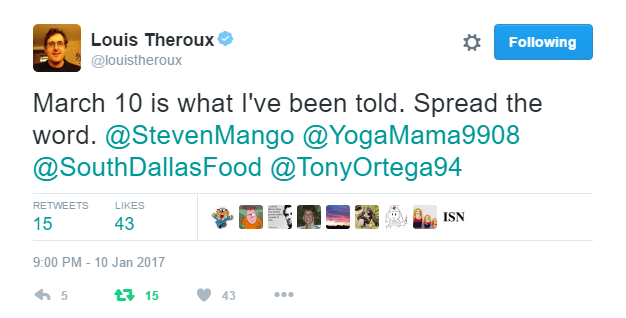 I wanted to share my experience filming My Scientology Movie with Louis Theroux and BBC Films. I was very excited to have had the opportunity to share my story about Scientology. I wanted to take you guys back to 2014 and give you the scoop on what actually happened on set of the film all the way up to the premiere in NYC at the Tribeca Film Festival.

My Scientology Movie will be in theaters in the USA on March 10. It will also be available On Demand and on Amazon Video!

Have you seen the film? Please comment your thoughts below! Don’t forget: please subscribe to my channel!

It's finally on Netflix!

So Theroux's movie is now on Netflix.....FINALLY!

I was really sick of waiting for it.

Writer and actor Lauren Shippen on her experience acting in My Scientology Move. 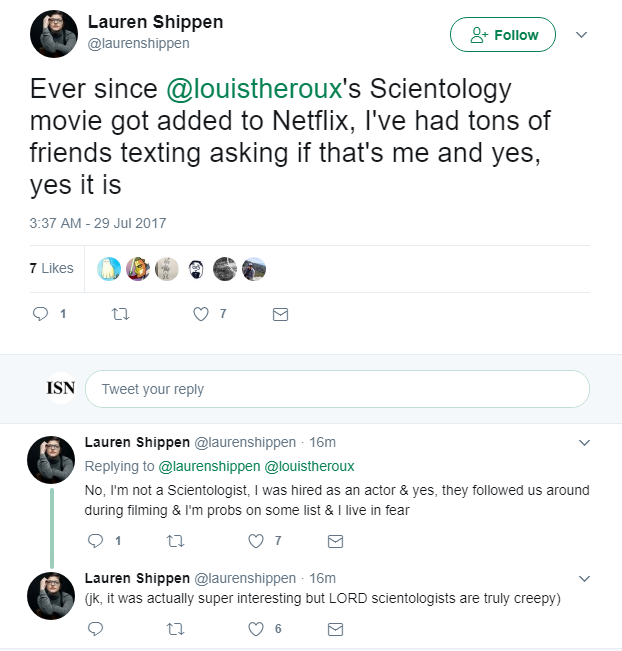 We watched My Scientology Movie and thought it was EXCELLENT!

Very good job - Louis Theroux... it was excellent and we will use it to help Scientologists go free!

Last night in the UK Louis Theroux's My Scientology Movie was on the mainstream BBC TV channel at 9pm.

I suspect that will get more publicity than the recent Birmingham UK Ideal Org announcement.

9 years ago on that date, a bunch of "us" met with Sen. Nick Xenophon and Bryan Seymour and that led to all sorts of pain for OSA ANZO.

I can't wait to watch Going Clear by Alex Gibney and this Movie by Louis Theroux.

So much to watch.

It is freeing to finally find out the truth.

Marty Rathbun's site is next for me too.

I have not even begun to uncover the dirty Secrets Scientology has been hiding since it all began.

Watched it last night and we all thought it was excellent. Plenty of cringy moments but that's just our collective cult history.

It was really interesting to see Marty flip out over his son being brought up by harrassing culties. I'm wondering if that was the button that pushed him into suing for peace with Drunken Maggot?

Anyway, I thought it was an excellent view of the crazy mindset that we all fell into in varying degrees. Thoroughly recommended by the Scooter family.

In the UK we have a TV program called Gogglebox. I don't know if other countries have got it but it consists of ordinary families who have a TV camera in their homes which watches them while they watch TV. Sounds boring but it's actually very interesting to see their reactions to TV programs.

Anyway, last week Louis Theroux's documentary was on BBC TV and on the Gogglebox program we saw the viewers reacting while they watched it.

Most of them had never heard of Scientology but those that had heard of it knew it was a bad thing. They were horrified when they realised Louis was being followed and when that female Sea Org member told Louis to get off their "private road" the general reaction was: "Oh, how rude!".

At the end, one of the viewers said: "I hope we don't have any of those Scientologists around here.".

Louis Theroux could never have known how best to deal with Marty Rathbun at the point towards the end of the movie when he was clearly very upset about the nasty (and chilling) message he had just received from miscavige concerning his newly adopted son.

While Marty was still trying to come to terms with miscaviges thinly veiled threats (on camera) and was telling Louis what had happened and how he was feeling about it ("he will rue the day he brought my family into this") Louis, instead of staying quiet and letting Marty talk and occasionally acknowledging him scio style (which would have calmed him or at least not further inflamed him) automatically went into professional mode and started to throw questions at him because he correctly sensed a red hot camera moment (the money shot) ... Marty went berserk and repeatedly yelled "fuck you" and ended his involvement in the movie there and then ... and poor Louis seemed genuinely stunned.

Louis recently said in a TV interview that Marty Rathbun is the most memorable person he has met so far out of all the documentaries he has made (and he's made a lot).

He apparently really liked him and even now seemed quite sad that things ended as they did.
You must log in or register to reply here.

Scientologists are planning a documentary on Louis Theroux
3 4 5

How Scientology is losing control of Hollywood