Google translation from Swedish to English:

Expressen: Stefan Malmström left everything for the scientologists 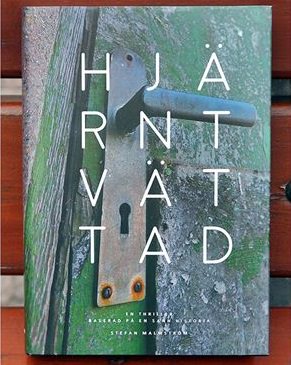 Stefan grew up in a villa community outside Hässleholm. He says that growing up was quite common with friends and a promising career in front of him as an orientator.

- The orientation was my life. I trained with Kjell Erik Ståhl and the runner-up Dan Glans, he says.

When Stefan was 17, he was invited to a party at his former girlfriend's sister. There were a dozen other people, a few years older than him, who came to change his life.

"These women and men were smart, verbal and nice. I was very impressed with their general education and how well they spoke, Stefan recalls.

Suddenly one of the men turned to Stefan, saying a date and a year, and invited Stefan to tell us what pictures appeared to him.

"I became incredibly nervous. Everyone was silent and looked at me. At first I did not get any pictures at all, but then I said I saw beautiful women in the coat dresses in Paris. The man who had asked the question leaned forward and said: Could it be a memory you see?

Every now and then a seed is sown, says Stefan. Reincarnation is a supporting thought in scienceology.

Started with courses at Scientologists

He began to socialize more with his newly formed friends, and when they said they were scientologists, Stefan did not see it as something strange.

"I thought that's why they were so smart. So when they asked if I wanted to go for a communication course, I thanked yes, completely unaware of what I had put in, he says.

On the course, which lasted for three days, the participants were mostly quiet and see each other in their eyes.

- It felt strange, I must admit. But at the same time I was so curious and wanted to learn more.
Scientologists want to save the world and humanity and say they have solutions to problems such as war, relationship problems and mental illness. By going to therapy and eventually achieving a certain state, Stefan would be a free soul.

- I wanted to be like them, so simple was it actually. Man has a need to associate with others, it is a survival instinct, and scientologists use it.

The next course that Stefan went about was study technique. The founder of Scientologists L Ron Hubbard has developed what he calls a revolutionary study technique, which involves understanding that the misunderstood word is an obstacle to learning.

"According to the scientologists, you must understand every word in a sentence so as not to lose interest in studying further. If you have the "right" study technique you can learn all subjects, according to them.

"I was slowly manipulated into their way of thinking"

Stefan wants to point out that scientologists are not evil, they are only convinced that what they are doing is something good that will save humanity.

"I was slowly manipulated into their way of thinking. I was neither lost nor saw myself as a searcher.
In comparison with saving the world, the orientation became increasingly meaningless. One summer day, during a race, Stefan decided to stop.

- I thought what the hell do I do? Here I'm in the woods looking for red-white screens, when I could do something much bigger and more important. Then I decided to become a scientologist, he says.

Stefan compares his entry into the Scientologists with a love, where you get so excited.
"I was now fully met by these people and suddenly felt an extremely strong purpose with life," he says.

After four years, Stefan signed a two and a half year long employment contract with scientologists.

"I was now completely convinced. Writing on was like finally coming home. I drew my cognitive map in total and got a new reality image based on the thoughts of Scientology, their ethics policy, reincarnation, how the trauma governs our lives, and so L Ron Hubbard's bizarre science fiction-based creation story.

Were writing employment contract with the church

The appointment meant that Stefan would work seven days a week. During the days he worked as a middle school teacher and in the evenings and the weekends he worked to recruit new members.

"We knocked the door, sold books, advocated the great, important mission to save the world. We received no salary but had to go to courses and in therapy with the auditors, as the therapists are called. I eventually achieved the first state called "clear", a superman with perfect memory and without physical or mental problems, "says Stefan, laughing dry.

Attracting a life as a carefree super human is a common and very successful tactic. Another recruitment approach is the so-called personality tests.

- It's a test of 200 questions about your life and misery. A graph then shows your strong and weak sides, with great emphasis on the weak sides. Then the recruiter claims that they have all the solutions. A very clever sales technique, albeit unserious and completely unscientific, says Stefan.

The turn came when their guru, the Englishman David, called for a meeting when he had an important message.

"He was the one in Europe who reached the highest level of what Scientologists call" the source of spiritual freedom "and was said to be able to leave the body and read thoughts. In our eyes he was a super person, remember Stefan.

Gurun wanted to start a secret project and presented a theory for the spiritually mature within the scientologists.

- He told us that 75 million years ago there was a ruler in the universe who thought the universe was overcrowded. He therefore captured a lot of individuals and brought them to the bomb plane to a far distant planet, the earth. There were phobias planted into the souls and they were also caught in physical bodies. David had come in a way for us to flee from this prison plan. He had located a flying craft hid on earth and with which we could accommodate. The car was found in a summer house area outside Hässleholm. Now we would go down to the craft to leave the prison, he says.

"We were a few who doubted but nobody dared talk about it. In sects you are punished immediately if you doubt or question. There is always a risk that someone is gossiping to the leaders, he says.

Stephen's contract had recently expired, and then he was looking forward to leaving Hässleholm. He went to Båstad where he worked as a bartender.

"If I had a contract of employment, they'd probably went to find out about me. One time after I left, uniformed Scientologist policemen came to a raid in our premises. Our guru fled from the country and the group was split. The new world image that Stefan built for several years was ravaged in just a few weeks.

Was ashamed for joining

For a long time he was embarrassed for being pulled into the sect, which he calls a mental virus.

- I asked myself over and over how I could have been so stupid and naive? At the same time, I was grateful that the crazy guru started the project, otherwise I might have been there than today.

In the fall of 2017, Stephen's book "Brain-washed", the first part of a trilogy, came. It is a thrill of romance based on his experiences and half is established.

"I wrote the book because I had an exciting story to tell, but also to explore and try to understand myself. I wanted to map the mental virus that these destructive movements spread, he explains.

His task in life now, he says, is to inform young people about the risks of these movements.
"I did not even have the tools to see what was happening. These tools I want to give to young people, by teaching them to recognize warning signals.

In Stock! Ships within 1-2 business days.

A nineteen girl gets a question about reincarnation and her life changes forever.

At a preschool, a pedophile wrestles a day-to-day leader after she has come to him to marry childcare children.

In a snare in his apartment, Luke Bergmann's best friend hanged with her four-year-old daughter lying dead on the couch next to her.

The life guard Luke Bergmann has moved from New York and lives with a protected identity as a regular man on Karlskrona's streets. Bergmann does not believe that the friend died and he suspects more will be murdered. Time is scarce when the pursuit of motif draws him into a thrilling force-spiral. Not least, he fears for his own life.

Thrillern Brain washed is based on a true story of how young people are manipulated into sects and totalitarian movements. About how easily affected we are of people around us, on the profound depth of evil and about the irreversible revenge.

Google translation from Swedish to English.

Brain washed - a lecture series and a book

The ambition of the "Brainwashed" project is to strengthen young people's resilience to being drawn into totalitarian movements; religious sects, political extremes and / or violence groups or organized crime.

"I have experience of getting into an unhealthy movement network. When I was seventeen, I happened to meet some nice people, just a few years older than myself. My world image changed radically, I completed my promising sports career as an orientator, became full-time scientologist and spent all my time on the sect. After a few years I managed to get out of my mind and slowly re-adapted to a normal life. For many others, it's not as good. An estimated 5,000 Swedes are jumping a totalitarian movement each year and about 2,000 of them are in such a poor mental condition that they need professional help. Many of them are young and this project is my attempt to provide them with tools to withstand the attractions of this type of organization. "