NEW book about Scientology: The Thunderstorms of Eden, by Sandra Kay

NEW book about Scientology - The Thunderstorms of Eden: The odyssey of a second-generation cult survivor and her recovery from child abuse, by Sandra Kay.

VIDEO: The Children of Scientology Strike Back 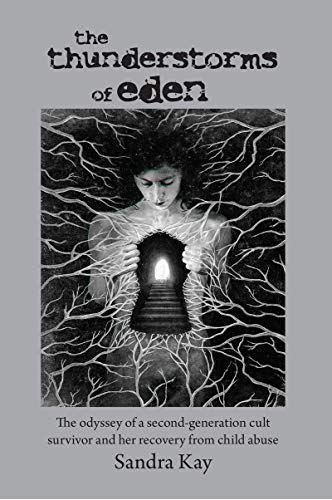 The Thunderstorms of Eden: The odyssey of a second-generation cult survivor and her recovery from child abuse

For decades the author did not realize the symptoms of PTSD and ADHD she was experiencing were due to the childhood trauma she was subjected to while a member of the Church of Scientology’s Sea Organization. At the age of 17, as one of the first residents of the “Big Blue” (the landmark building in Los Angeles), she not only witnessed the largest FBI raid in history, she was also a member of the infamous 1977 PAC RPF (Rehabilitation Project Force) where she pulled 18-hour shifts performing heavy labor to renovate the new headquarters. What followed were years of sleepless nights as a member of the United States Guardian’s Office while the Church battled the government to keep L. Ron Hubbard’s wife, Mary Sue Hubbard, out of jail for her role in illegal government break-ins known as Operation Snow White. Sandra left in the 80’s only to find herself haunted by the ghosts of the Church for decades.

She found solidarity through her work with refugees from Cambodia and Africa and healing through her work as a photographer. She has bonded with her fellow cohorts known as the Children of Scientology, breaking the stigma of isolation so many second-generation cult survivors have struggled with.

Her memoir shines the way for the children of the world who have experienced similar trauma (through genocide and war), by advancing the conversation on Adverse Childhood Experiences and how this universal crisis affects over 34 million people in the U.S. alone, transcending all racial boundaries.

Her journey spans over five decades and 30 countries culminating in a truth-to-power indictment against Scientology, one of the most powerful cults in existence today, known for their celebrity followers and their well-documented attacks against their victims and critics to keep the truth from coming out.

Never once has the Church taken any responsibility for their actions.


More about the author

Sandra Kay is a second-generation cult survivor and photographer who was born in Washington State and found herself in Hollywood at 14 years old being indoctrinated into Scientology. She was recruited into the Sea Organization (the para-military arm of the Church) at 16 where she signed a billion-year contract. She was subjected to, and continues to witness the stories of abuses against children who were born into or forced into the cult by their parents. Sandra is also a professional photographer who has been published in National Geographic and Black&White Magazine as well as the recipient of several photographic awards and jury selections. As a diversity specialist she continues her work with communities of color, expanding her reach to the children of the world and beyond through her art and writing.

Some of us here should know her.
You must log in or register to reply here.

NEW Book - Over the Edge: A Pawn in the Scientology Money Machine, by Kay Rowe

NEW Book - The Expert Witness: My Life at the Top of Scientology, by Jesse Prince

NEW Book: Naked in the Spotlight: My Life with Sex, Singing and Scientology

NEW book - The Defector: After 20 years in Scientology, by Robert Dam