Attention all US-based folks who are appalled that Scientology was granted tax exempt status and want to see it repealed:

The Senate Judiciary Committee unanimously approved a major Freedom of Information (FOIA) reform bill last month. A similar bill was also unanimously approved in the House prior to this one. So there is significant traction right now on bringing an end to government secrecy and ensuring a greater degree of transparency.

Of particular interest for Church of Scientology ex-members, critics, watchers and other SPs on the Senate's FOIA Improvement Act (S. 2520) is a major change to the B(5) exemption. This change basically means a mountain of dox that are always denied under current FOIA rules cannot remain secret forever and must be released after 25 years.

So all those repeatedly denied requests for the files on the secret negotiations between Scientology and the IRS would have to be coughed up and handed over for public disclosure in 2018!

Getting those dox could be a huge boon for those of us interested in lobbying for a renewed investigation into the cult's tax exemption status. But we need to get the current bipartisan bill to pass a full Senate vote. According to social media, Senator Bob Corker (R-Tennessee) and Senator Tom Coburn, M.D (R-Oklahoma) are the major road blocks who are against these reforms.

For more information on exactly what is involved with this bill, check out the must-read links in my next post below. Then if you're from the US, please take the time to go to the following link and harpoon your Senators to support these reforms and vote YES to Senate Bill 2520. It only takes a few minutes:

Everything you need to know about Senate Bill 2520 and the proposed FOIA reforms:

Problem is, the Demented Midget doesn't have anyone left competent enough to infiltrate the archives and get rid of these documents without giving themselves away.

This info is already crossposted to the SPs R Us FB group, ESMB, RFTTP and OCMB. So spreading is done. Now it's your turn. Don't just click me a "Like" or a "Thank You" --> Click the link at the bottom of OP and harpoon your Senators!

BREAKING: Only one Senator’s hold remains on the FOIA Improvement Act, and then the Senate will vote on it. Possibly any day now!

EDIT: And that one hold is Oklahoma's Senator Coburn:


NOT Coburn said:
Early media report about the one remaining hold on the FOIA Improvement Act appears to have been wrong. According to @OpenTheGov activists on Twitter, It is NOT Senator Coburn who is delaying the vote. It is Senator Jay Rockfeller (Democrat-WV) who is retiring from office at the end of December and has already taken down his online contact form:

Yes, he's a descendent of THE Rockfellers and his pending retirement is not a good sign. This old fart has no pressing reason to keep his constituents happy and wouldn't be around to be held accountable if the bill doesn't go to vote during the current session.

Possible angle for harpooning this roadblock is to go through his long list of committee assignments,

Look for connections to one's own Senators and then urge that person to tell Rockfeller to do the right thing.
Click to expand...

Another possible harpooning strategy for folks who haven't used the link at the bottom of OP to fire off an email to their Senators urging them to support the FOIA Improvement Act, check out the Dems on this list of current Judiciary Committee Members:

This bipartisan bill is their baby. So if one of the committee Dems also happens to be your Senator, customize your email message to ask them to urge their fellow Dem Rockfeller to drop his hold on this bill.

SUCCESS! Senator Jay Rockfellar has dropped his hold on this bill going up for a vote. But harpoons encouraging your Senators to vote YES on SB2520 using the Take Action link in the OP above are still needed.

EDIT: Arrggh! I missed the all important *IF* in the above tweet. So my claim of SUCCESS on the final hold lifted was premature. Rockefeller is still a cock blocker on this. But harpooning Senators is still needed.
Last edited: Dec 5, 2014

Thanks for all you are doing on this important matter, Heidi.

Those IRS docs will be a goldmine of hidden information revealed. What is also terrific about this bill is that it helps provide improved accessibility and availability to government agency documents in general. The more who write, the more support the bill will get.

I used the link you gave in the OP to send the form letter to my state senators. It was very simple to do. I thought it was sufficient so I didn't edit it or add to it but people can write what they want. Readers can just write to ask that the senators support this bill because do.

I found this other site and page on the bill, which might be of interest to you and others. This link is about S-2520. Information is listed by contributions made to legislators from interest groups that support or are in opposition to the bill. The contribution figures includes reported contributions to congressional campaigns of Senators in office during the 113th U.S. Congress, from interest groups invested in the vote according to MapLight as of June 2014

For 24hours, all hell broke loose with a Thurs-Friday Twitter campaign ripping into Senator Rockefeller when it was revealed his was the final hold on the FOIA Improvement Act that had not been lifted on Thursday. Until he finally made a weak-knee'd statement that didn't really say much of anything, and contradicted his flowery farewell speech he made on Thursday praising the need for bipartisanship and compromise.

Must-read infos for anyone willing to help harpoon the relevant parties now include these references, the title in bold red includes specific actions you can do to help:

Transparency bill on the verge of passing is being blocked by Sen. Rockefeller
By CJ Ciaramella, Freedom of the Press Foundation 12/5/2014
https://freedom.press/blog/2014/12/transparency-bill-verge-passing-being-blocked-sen-rockefeller

After pressure significantly mounted on Twitter from the last post above and his voice mailbox filled up on his office phone line and started going unanswered, the Senator finally responded with a short press release statement the got updated into the following article at half past 6pm once it was posted to his website (as a press release on the congressional record) and sent out on social media.

Rockefeller under fire for blocking FOIA bill
By Julian Hattem, The Hill 12/05/2014
http://thehill.com/policy/technolog...e-for-blocking-foia-bill#.VIJSJ9p5Zd0.twitter

Rockefeller Issues Statement Opposing FOIA Legislation
FreedomInfo 12/5/2014 (from one of the 70+ open government and pro-transparency groups supporting this bill)
http://www.freedominfo.org/2014/12/rockefeller-issues-statement-opposing-foia-legislation/

Rockefeller Opposes Leahy FOIA Bill (Includes a late night comment by Sen. Leahy, he who is credited as author of the bill)
By Humberto Sanchez, Roll Call 12/05/2014
http://blogs.rollcall.com/wgdb/rockefeller-opposes-leahy-foia-bill/

Statement on Senator Rockefeller's Hold on Bipartisan FOIA Bill
By Patrice McDermott, Executive Director of OpenTheGovernment 12/6/2014
(another one of the 70+ open government and pro-transparency groups supporting this bill)
http://www.openthegovernment.org/Rockefeller_Release_FOIA_Reform

See also, this post I made on WWP where I go into more details on harpooning strategies from the bold red link above:
https://whyweprotest.net/threads/ne...ologys-irs-tax-exemption.121552/#post-2500970

You can also contact your own U.S. Senators and ask them about the hold Here:
http://action.citizen.org/p/dia/action3/common/public/?action_KEY=12634


Link to local news report on this published in the Charleston Daily Mail where Rockerfeller's constituency is in West Virginia : 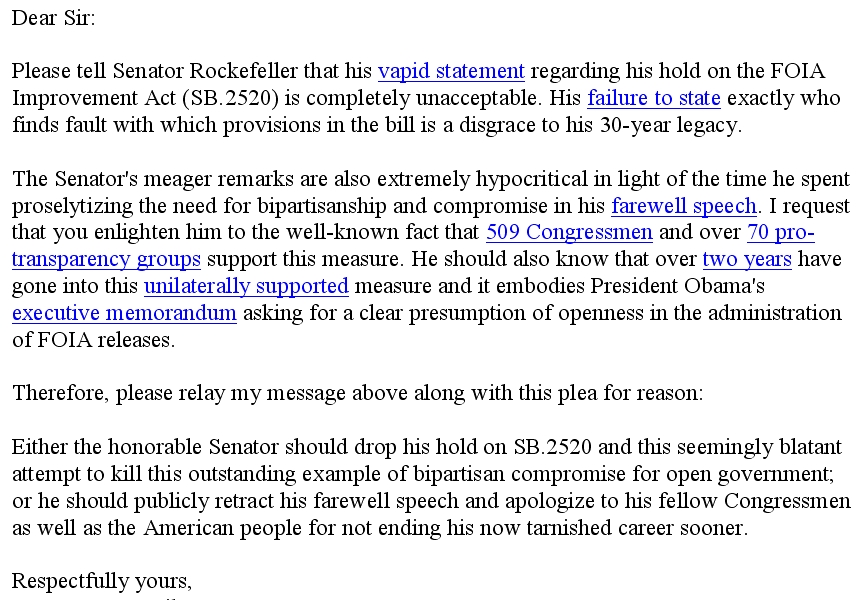 Excellent, AnonLover! I will write something to them, as well, tomorrow. Right now my body and mind are on vacation

Here's another good, detailed, explanation of the situation brewing with FOIA Senate Bill 2520. And please take a few minutes to send e-mails to Sen. Rockefeller's staffers as noted upstream ITT.

One Man is Single-Handedly Standing in The Way of FOIA Reform: Outgoing Senator Jay Rockefeller Wants to Kill the FOIA Reform Act This Monday
By The Sparrow Project, 12/7/2014
http://www.sparrowmedia.net/2014/12...nding-in-the-way-of-the-foia-improvement-act/

Because I'm a good citizen, with a black little heart, I think I'll invite Mr/s Blanky to sit down with me tonight and send off some emails to our legislators. 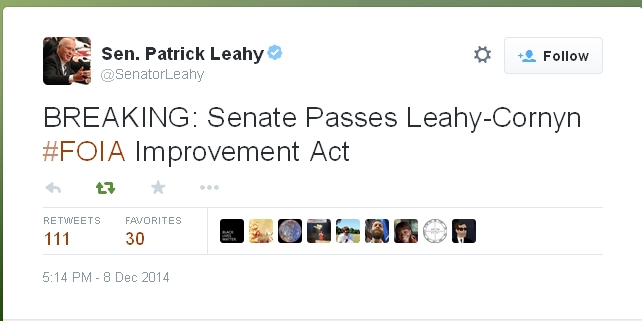 Are you going to file a request for the IRS-Scientology deal information now?

Purple Rain said:
Are you going to file a request for the IRS-Scientology deal information now?
Click to expand...

Purple Rain said:
Are you going to file a request for the IRS-Scientology deal information now?
Click to expand...

I was apart of the small group of Anons who got XenuBarb to file one in 2011. See: http://www.exposescientology.com/scientologyirs.html

That effort was an experimental venture, and flawed. It failed. However, after crusading on Twitter and FB the past week I have made new friends in the opengove and FOIA activist camps. They have given me some sage advice on an entirely different strategy for pursuing dox on the IRS-Scientology deal. So I have a somewhat complicated two-phase plan that I won't discuss just yet. Phase 1 doesn't require the new legislation and will begin quietly in the near future, but Phase 2 does require the new laws to go into effect. Phase 1 is basically prep work. Phase 2 is when shit gets real. More on all this later.

Meanwhile, the next step for supporting the effort to get the new legislation passed will be harpooning Representatives by state to encourage them to pass the Senate bill as-is in The House on Thursday. More on how to do this coming later today.
Last edited: Dec 9, 2014
You must log in or register to reply here.

Huffington Post: It's Time to End the Church of Scientology's Tax-Exempt Status

P
WTP: Investigate the Church of Scientology for violation of IRC section 501(c)(3)