My Jessica is engaged....

Lori Hodgson's Christmas wish is to be reunited with her Scientology Disconnected children.

Scientology is a mind controlling prison. Scientology says there is no enforced ‘Disconection Policy’ that it is each parishioners own choice who they want to be in communication with. This is a lie! For example, with my own children….. how can it be their choice to never see their mom or grandma again unless we comply to Scientology’s demands. My disconnected son told me that he loves me and wants to be with me, but he doesn’t know what to do. If he see’s me then he will lose his father and get expelled from Scientology. This is not his own choice, it is a “Sophie’s Choice”. This is one of the ways how Scientology keeps their members in line.

Sooner or later the controlled Scientologist will walk away and be free again to see who ever they want and think for themselves.

I have high hopes that my children will be back with me again.

I will never give up on my son and daughter.

Think about it Jessica and Jeremy isn’t FREEDOM, LOVE and FAMILY a much better choice?

PODCAST: Lori Hodgson talks about being Scientology disconnected from her children

PODCAST: Lori Hodgson talks about being Scientology disconnected from her children on The Health & Happiness Show, 100.7 WHUD.

Mother's Day finds one mom fighting to see the kids Scientology "disconnected" her from. Lori Hodgson, very recently seen on ABC TV's Nightline, speaks out against the practice that has destroyed families. Jessica and Jeremy - call your mother! - And - meet a funny mom who doesn't mind being mean. Comic Kerri Loiuse Cotter is serving up the laughs this Sunday. This Health & Happiness Show airs May 8 on 100.7 WHUD

Mother's day in the cult, such a happy time eh, other than father's day......

Retweets and replies welcome. One can of course do both.

Document leak: How Scientology freaked out over losing Lori Hodgson and her mom

Document leak: How Scientology freaked out over losing Lori Hodgson and her mom.

A very good article by Tony Ortega with important leaked material. Go to Tony's site for the leaks.

Tony Ortega: Document leak: How Scientology freaked out over losing Lori Hodgson and her mom

Now we have a document from 2010, and it provides a really interesting look inside another panicky situation: When two Scientologists had decided to turn their backs on the organization.

Those two people were Dee McMurdie and her daughter, Lori Hodgson.

If you weren’t already familiar with Lori’s story from the numerous times we’ve written about her, you might have caught her a couple of weeks ago on ABC’s Nightline program. She was featured in a segment about Scientology’s toxic policy of “disconnection,” which is keeping her two adult children, Jeremy and Jessica Leake, from maintaining any contact with her. We’ve written about Lori’s attempts to see her kids with surprise visits to Texas. The Nightline episode featured a few seconds from POW-style Church of Scientology videos of Jeremy and Jessica saying that they couldn’t forgive their mother for trying to harm Scientology. (Lori has made it clear that she doesn’t care if her kids stay in Scientology, she just wants them back in her life.)

Things in 2016 are really a mess in this family drama. But our document takes us back to 2010, when Scientology was first finding out that Lori and her mother Dee had decided to resign from the church. The Stevens Creek, California mission’s “Director of Special Affairs” is who put together this report — the DSA is the local branch of Scientology’s “Office of Special Affairs,” the church’s public relations and intelligence wing.

When the DSA learned that Dee McMurdie had resigned from the church in a letter, she dispatched Mary Jo Hyland and Pat Wehner, the San Jose mission holder, to meet with Dee and assess the situation. She then addressed her report in proper Sea Org fashion to numerous “terminals” (people) above her rank…

Happy Wedding Day! Wish I could be with you on your big day.

Happy Wedding Day! Wish I could be with you on your big day.

Wayyyy back before Scientology, we were told of Nazi kids or Russian kids who'd turn their parents in to the Gestapo or the KGB if they heard them speaking privately against the Third Reich or Stalin. The image was terrible. "Kids turned against their parents by a totalitarian regime". By having Lori's kids speaking out against their mother, in the same time frame as Ron Miscavage's interview and book release, Scientology is creating a horrific public image of themselves.

Unfortunately for Scientology, Lori's story isn't that unusual. Scientology doesn't encourage it's members to have strong family relationships. Scientology was a disaster for my family and I didn't even do the disconnection game. You'd think the COS could parade a handful of families that were saved by Scientology that enjoyed picture perfect closeness. The Scientology families that I knew maintained close relationships IN SPITE OF SCIENTOLOGY.

Can you imagine a family vacation as a Scientologists?

Do families go to Flag or the Freewinds for a great family vacation? LOLOLOLOLOL

Scientology is being persecuted in the press for what it is, anti-family.

Jessica and Jeremy I’m hoping you read this……

A Mother's Heartbreak: Jessica and Jeremy I’m hoping you read this…… 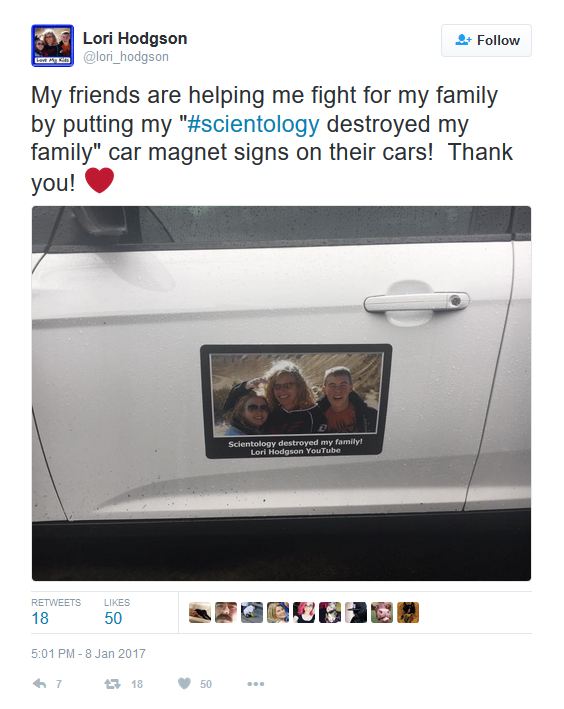 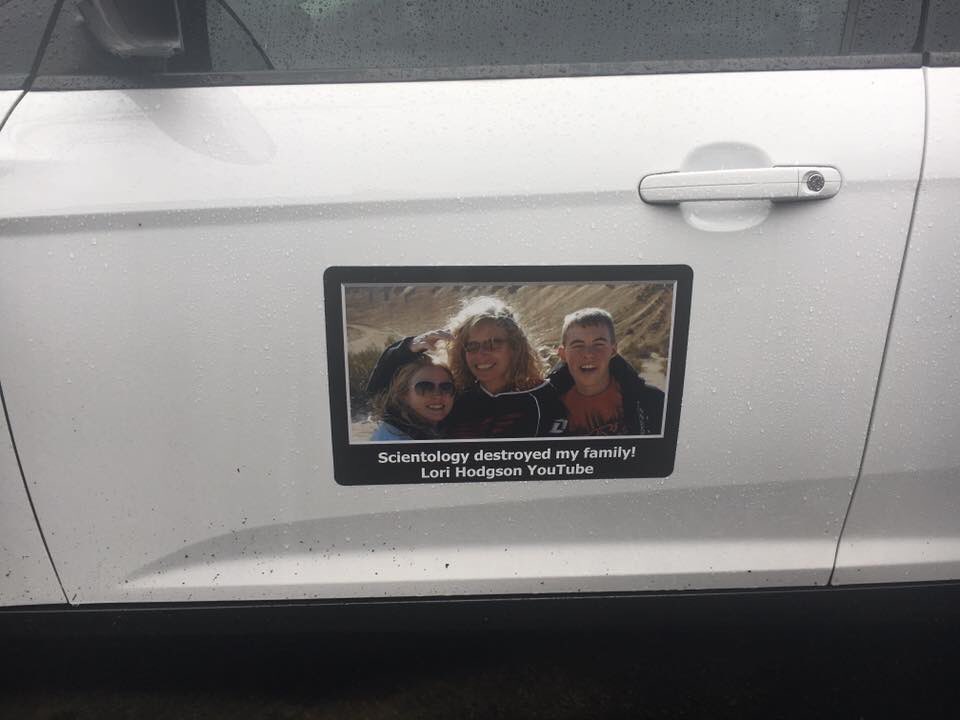 I thought this comment from someone from Cupcakes for Breakfast summed it up really;

"This report- why so shouty, Scientology?
One thing (out of many) that struck me is the zero self-awareness demonstrated by whoever wrote it. They casually list the actions that drove Lori and Dee away- (the SO recruiter pounding on the door- just that alone registers on the crazy scale- not to mention the circumstances surrounding it- they wanted to recruit the underage son- Lori had surgery and was in pain, the sniping the kids away behind their moms back, the "who have you been talking to, who showed you the "bad" websites-all of it!)
It is off the charts creepy and controlling and insidious and WRONG! At any point, did any of them have the thought of, "maybe we could have handled this better?" Probably not. They have all the finesse of a blunt instrument. There is no common sense, no wisdom, no humility, no kindness, no compassion, no learning, no real human connection. They are a bunch of snakes. This whole story makes me feel ragey, and this letter is just a perfect example of why."

"As Chuki says, it's because they've been thought programmed to do things a certain way - Hubbard's way - and never ever deviate from it. That includes snitching every little thing "for their own good." It's diabolical. The thought patterns are retrained from early on (Training Routines) to shut down critical thought. They are utterly convinced that because Hubbard said so, this IS exactly the right way to handle it. Any individual or critical thought gets stamped out early, and hard. People start to "wake up" when something happens to shake their certainty in those ingrained patterns."

During this past 1 1/2 years, I was very depressed about my kids and didn’t have the strength to keep fighting for them. Back in April 2016 Scientology had my kids do these interviews:

I was in shock! I thought my kids looked like they were manipulated to go on camera and clearly the things they said were scripted! I was so sad for them and distraught over my broken apart family, it affected me badly. I shut down.

I haven’t spoken out publicly since then. Not only did I not have the strength to speak out, I thought just maybe if I was quiet then I would have a chance to reunite with my son and daughter.

A couple months ago in August 2017 I decided to try to contact the IJC, Internationial Justice Chief, Mike Ellis. When Scientology declares one a “Suppressive Person” then the IJC is the only person you can talk too. I called many times leaving a message with the receptionist to have him call me and that it’s regarding my disconnected children.

After several attempts the receptionist said the IJC never takes calls or returns calls. She advised me to put it in writing. So I wrote a letter to the IJC.
My 1st letter to the IJC dated 8-15-17:

My name is Lori Hodgson and I’m the mother of Jeremy Leake and Jessica Davitt. I have been disconnected from my two children for 7 years. I’m reaching out to you because I was told you are my only terminal. I want to make an agreement that is good for my children and I so we can be a family again. I can do good roads, good weather with my children. I am fine that they do their Scientology religion. I just want to be their mom. 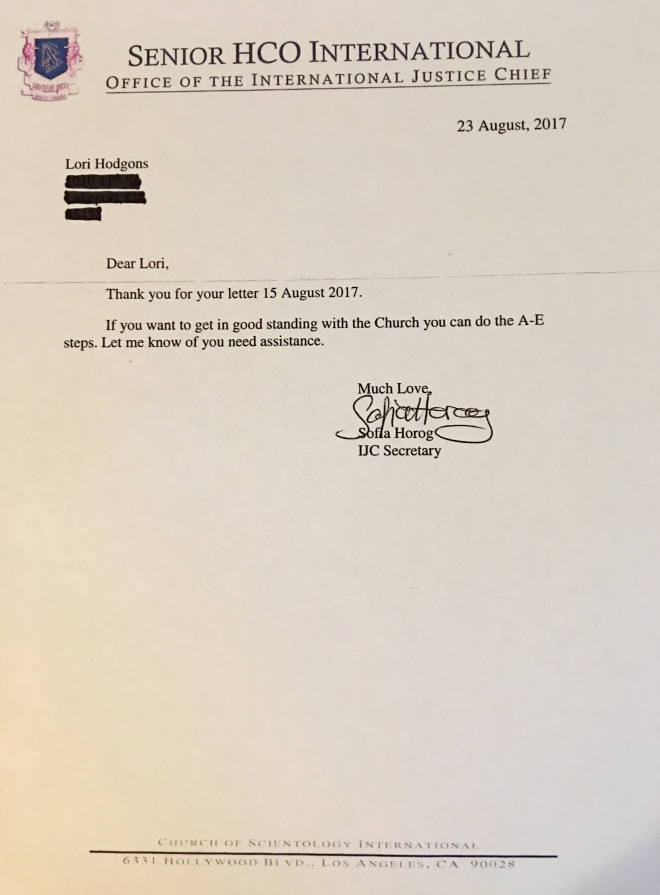 That poor woman, she sounds broken.

Christmas magnifies everything ... and what a cretinous response, she didn't even manage to spell Lori's surname correctly.

The problem is she's expecting them to be "reasonable". That isn't going to happen.

I told you I was trouble said:
That poor woman, she sounds broken.

Christmas magnifies everything ... and what a cretinous response, she didn't even manage to spell Lori's surname correctly.
Click to expand...

Yes, and the letter read 'let me know of you need assistance'. So much for Senior HCO International. What a fucking shambles!

What would happen if ALL ex-sciobots showed up / wrote / called that they wanted to do the steps. All at the same time. All showed up same day and time and entered the orgs, missions, etc.

If we all went in and demand to be let back in what would they do? Would they trust us? Would they help us? Would they "do it" if we all refused to PAY A DIME? What if we claimed poverty and yet longed for the reentry into their "haven/hell"?

They would shit a square brick the size of Oklahoma... no insult intended to Oklahoma...

How could they ever trust any of us again.... but the thought puts a smile on my little face.

VIDEO: When Scientology Takes Your Kids - The Lori Hodgson Story.

When Scientology keeps a mother from her child in the ER: Lori Hodgson’s story

8/22/18: Book Event for A Mother’s Heartbreak: How Scientology Destroyed My Family by Lori Hodgson

9/22/18: Book signing for A Mother’s Heartbreak: How Scientology Destroyed My Family by Lori Hodgson

7/21/18: Book signing for A Mother’s Heartbreak: How Scientology Destroyed My Family by Lori Hodgson