I am cross-posting the following not because I necessarily agree with the thesis or analysis, but because I believe it may reflect the view of the Russian Orthodox Church, and perhaps also the government of Russia, on Scientology.

This presentation was read by Aleksandr Leonidovich Dvorkin, president of the Irinaeus of Lyons Center for Religious Research Studies, on January 26th, 2016, at a conference run by the Orthodox St. Tikhon University for the Humanities. (Translator’s note: While we wouldn’t claim that the Church of Scientology is an integral element of the US Intelligence Community, Dvorkin’s lecture is an excellent expose of the nexus between the Western power structure, its intelligence apparatus and dangerous cults).

The topic of Scientology’s connection to the CIA became commonplace long ago. It’s mentioned in a mass of articles, interviews, and television programs. But when I referred to this in passing during a conversation with one journalist several months ago, he took interest: do I have irrefutable evidence of or clues to this connection? Could I, so to say, point to a “smoking gun?”

The question interested me, and I decided to try and collect materials on this topic. So can we bring irrefutable evidence?

At the beginning of the 1990s. Greek police raided the office of Scientology in Athens and seized there are many sects of internal documents, some of which were published. Some of them contain references to the assistance that the CIA has foreign offices of Scientology. 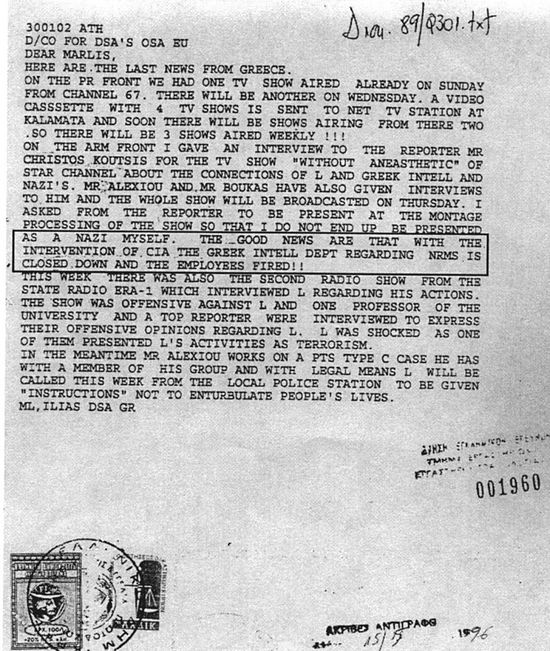 Full Google English to Russian translation - Scientology and the CIA: Myth or Reality?

Saint Tikhon's Orthodox University of Humanities (Russian: Православный Свято-Тихоновский гуманитарный университет) in Moscow, Russia is acoeducationaltheological university for the laity affiliated with the Russian Orthodox Church. The university, established in 1991, is Russia's first theological graduate-level school for the lay men and women, unlike traditional Orthodox seminaries preparing male students for ordination. It is the only Orthodox institution in Russia that is accredited to issue generally accepted diplomas. Ten departments of the university provide education in theology, history, teaching, missionary practice, religious arts and music, economics, social services and information management. Basic theology studies are mandatory for students of all departments. Admission does not require adherence to Orthodox faith or any religious tests, except for the icon school where applicants should demonstrate skills in traditional Orthodox art.

Alexander Leonidovich Dvorkin (Russian: Александр Леонидович Дворкин; born 20 August 1955, Moscow) is a Russiananti-cult activist, former clergyman of the Russian Orthodox Church,[SUP][1][/SUP] president of the Saint Ireneus of Lyons Informational Consultative Center,[SUP][2][/SUP] an anti-cult organisation affiliated to the Russian Orthodox Church[SUP][3][/SUP] and since 2009 Vice-President ofEuropean Federation of Centres of Research and Information on Sectarianism (FECRIS), umbrella organization for anti-cult groups in Europe.[SUP][1][/SUP] Dvorkin graduated Doctor of Philosophy in 1983 at the Saint Vladimir's Orthodox Theological Seminaryin Crestwood, New York. He has appeared on Russian television.[SUP][4][/SUP]In 1993 with blessing of Patriarch Alexy II he established Russian anti-cult organization currently called Association of Centres for the Study of Religions and Sects (RATsIRS). From that time on he is extremely active in opposing non-Orthodox religions and movements through his publications.[SUP][1][/SUP]Dvorkin is a critic of Scientology, which he regards as a dangerous cult. Church of Scientology-affiliated organizations describe him as an "anti-religious extremist," and compile negative information about him on their websites. In 1997, Scientology and several other new religious movements sued Dvorkin and the Russian Orthodox Church for defamation, but their case was dismissed.[SUP][5][/SUP]

At the beginning of the 1990s. Greek police raided the office of Scientology in Athens and seized there are many sects of internal documents, some of which were published. Some of them contain references to the assistance that the CIA has foreign offices of Scientology.

I don't see anything concrete here. Speculation based on nebulous evidence

Waste of time to read that article. 2/3 of it is about occult blah blah. Trying to add 2+2 with out having any 2's. It provides no real evidence.

An observation by anonysamvines on WWP.


Several things that do not make sense would make sense if the CIA considered Scientology an asset. But it is possible Scientology just pushed the religious freedom button and some derps helped out.

It also links in to the mention by Ursula of US embassy agents trying to hinder her work (mentioned by Jane in the Cafe screenshot posted in that thread -I am trying to track the original source, trying being the operative word).

Nothing is conclusively dox'd but worth keeping an eye out for

Same article in English on Pravoslavie.

Scientology and the CIA.

Scientology and the CIA.

A follow-up observation by anonysamvines on WWP:

Thank you
That is well written, easy to understand and digest.
This
"a report slipped by that after US Secretary of State Madeleine Albright’s arrival in Germany, German Scientologists were invited to the US Embassy for a briefing. "
Also seems to correlate with the Ursula statement I am trying to track down.

It also correlates to the many, apparently inexplicable, failed investigations into Co$ by the FBI.
Doxed history shows how often when the FBI and CIA interests clash at a high level the FBI lose. Even/especially when the CIA are overstepping their legally mandated boundaries