As noted by Tony Oretega (second item), the Church of Scientology has awarded its Freedom Medal to Nation of Islam Minister Tony Muhammad: 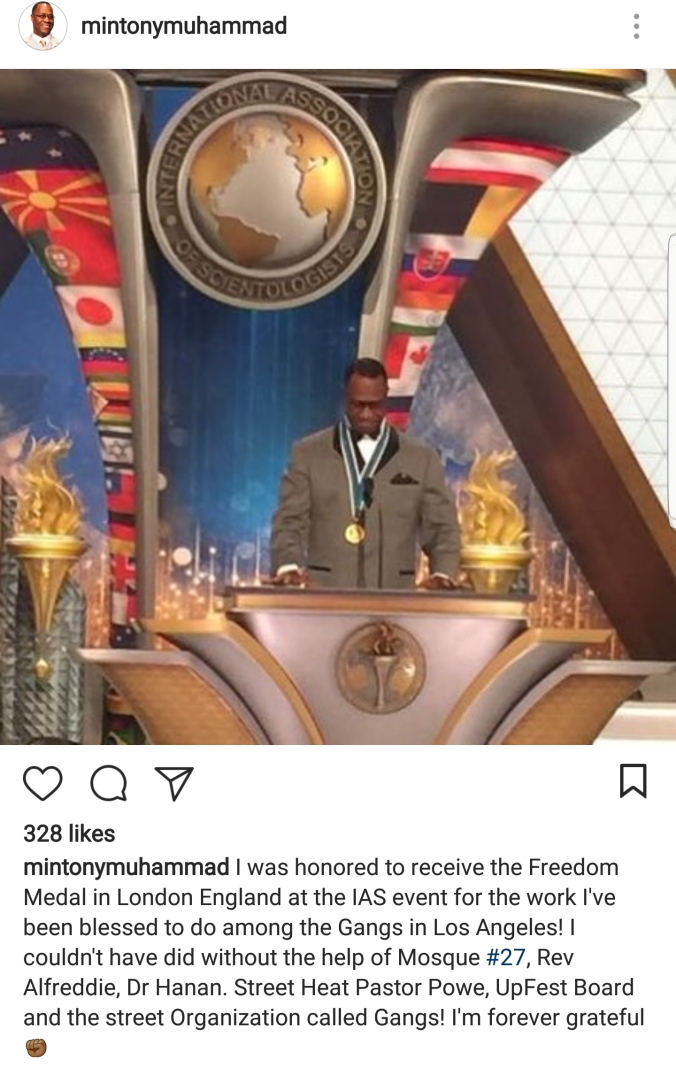 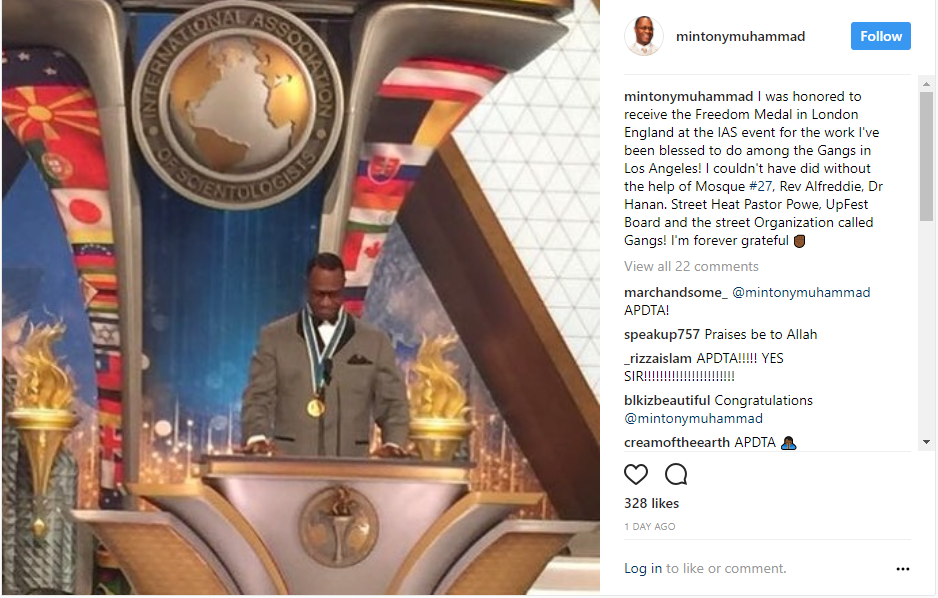 This was also noted in the Facebook group Dianetically speaking: 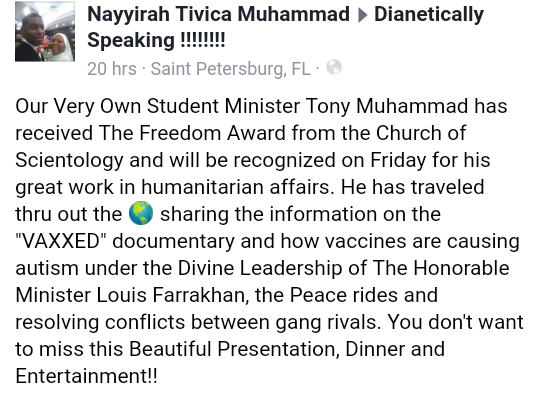 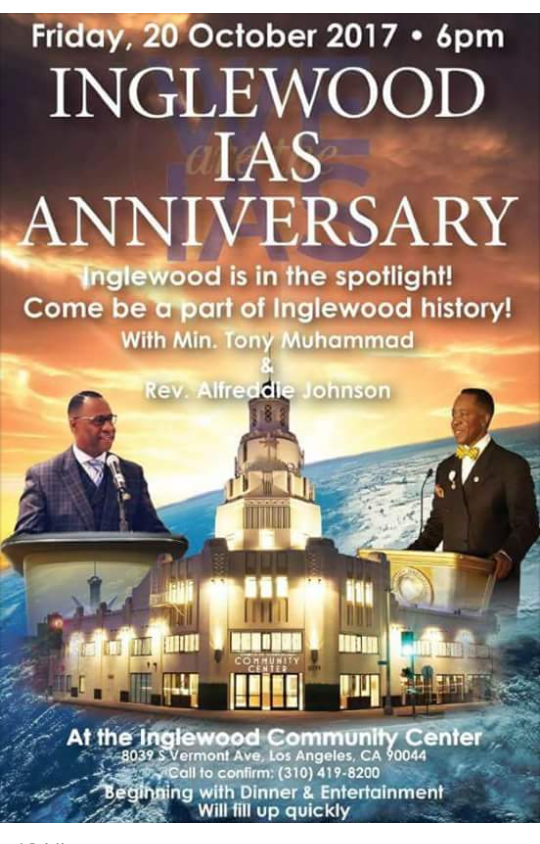 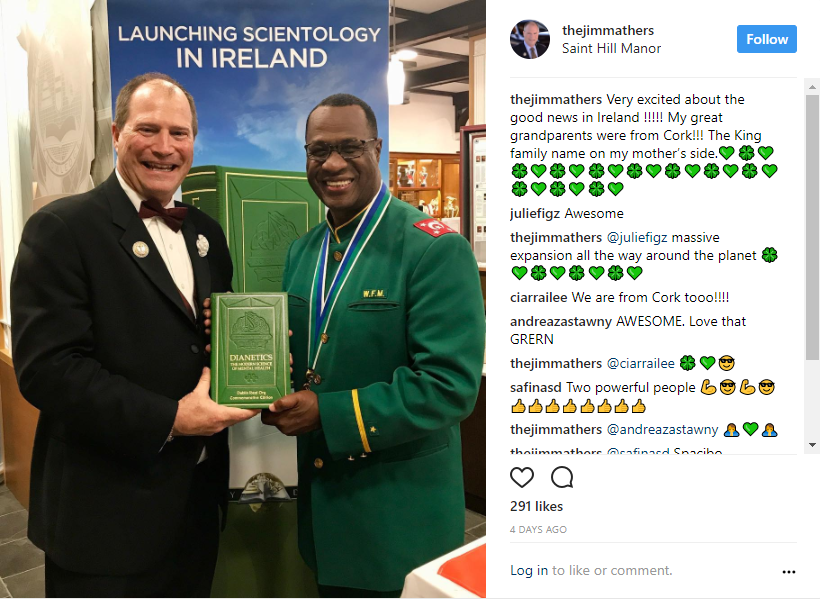 As previously noted on this forum, Nation of Islam Minister Tony Muhammad promotes the anti-Semitic book "The Secret Relationship Between Blacks and Jews, Volume 2." 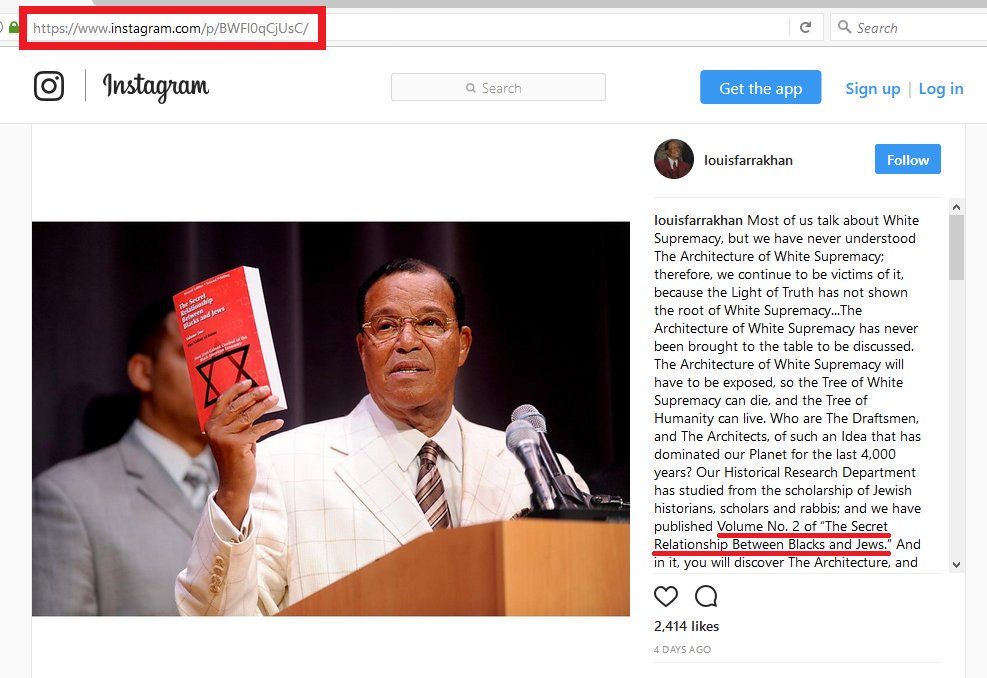 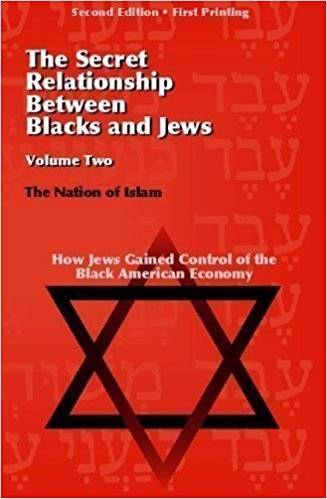 The Wikipedia article about the book explains:

The book has been labeled an antisemitic canard by some historians, including Saul S. Friedman, who contends that Jews had a minimal role in the New World slave trade.[3] Henry Louis Gates, Jr., head of the department of Afro-American studies at Harvard University, called the book "the Bible of new anti-Semitism" and added that "the book massively misinterprets the historical record, largely through a process of cunningly selective quotations of often reputable sources".[4]

The book was criticized for being antisemitic and for failing to provide an objective analysis of the role of Jews in the slave trade. Common criticisms were that the book used selective quotes, made "crude use of statistics,"[10] and was purposefully trying to exaggerate the role of Jews.[8] Historian Ralph A. Austen criticized the book, saying that the "distortions are produced almost entirely by selective citation rather than explicit falsehood ... more frequently there are innuendos imbedded in the accounts of Jewish involvement in the slave trade,"[11] and "[w]hile we should not ignore the anti-Semitism of The Secret Relationship..., we must recognize the legitimacy of the stated aim of examining fully and directly even the most uncomfortable elements in our [Black and Jewish] common past."[12] Austen acknowledges that the book was the first book on the subject aimed at a non-scholarly audience.[13]

In 1995, the American Historical Association (AHA) issued a statement condemning "any statement alleging that Jews played a disproportionate role in the Atlantic slave trade."[5]

1992 – Harold Brackman, Jew on the Brain: A Public Refutation of the Nation of Islam's The Secret Relationship Between Blacks and Jews.
1992 – David Brion Davis, "Jews in the Slave Trade," in Culturefront (Fall 1992) pp 42–45.
1993 – Seymour Drescher, "The Role of Jews in the Atlantic Slave Trade," Immigrants and Minorities, 12 (1993), pp 113–125.
1993 – Marc Caplan, Jew-Hatred As History: An Analysis of the Nation of Islam's "The Secret Relationship" (Published by the Anti Defamation League).
1998 – Eli Faber, Jews, Slaves, and the Slave Trade: Setting the Record Straight, New York University Press.
1999 – Saul S. Friedman, Jews and the American Slave Trade, Transaction.
A post-1991 scholar who analyzed the role of Jews in the overall Atlantic slave trade concluded that it was "minimal," and only identified certain regions (such as Brazil and the Caribbean) where the participation was "significant."[7]

Wim Klooster wrote: "In no period did Jews play a leading role as financiers, shipowners, or factors in the Transatlantic or Caribbean slave trades. They possessed far fewer slaves than non-Jews in every British territory in North America and the Caribbean. Even when Jews in a handful of places owned slaves in proportions slightly above their representation among a town's families, such cases do not come close to corroborating the assertions of The Secret Relationship."[6]

The Anti-Defamation League states that Volume Two of The Secret Relationship blames Jews for "promoting a myth of black racial inferiority and makes a range of conspiratorial accusations about Jewish involvement in the slave trade and in the cotton, textiles, and banking industries".[14] 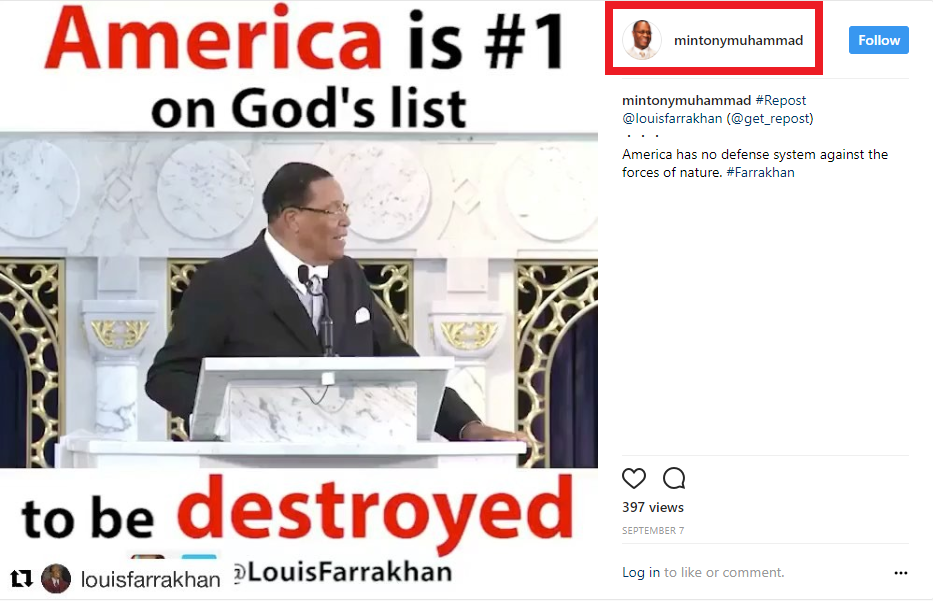 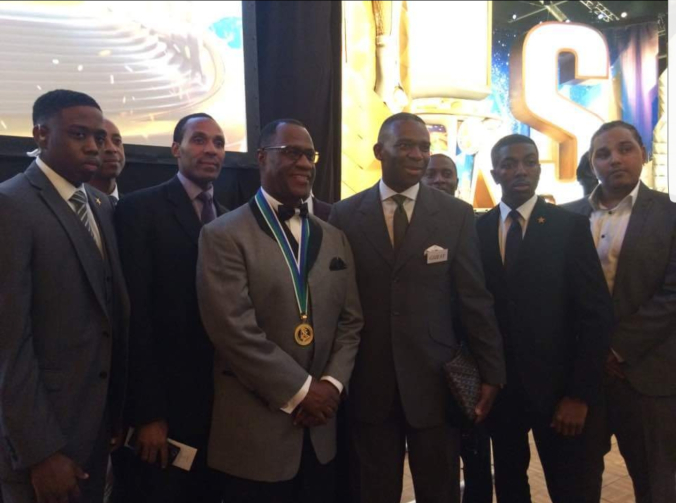 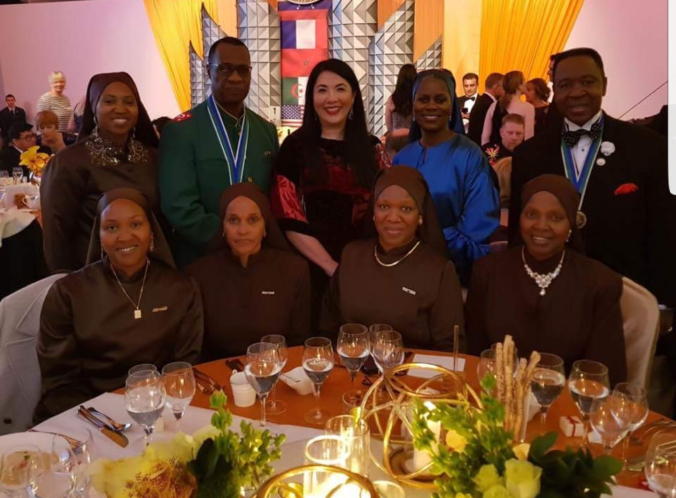 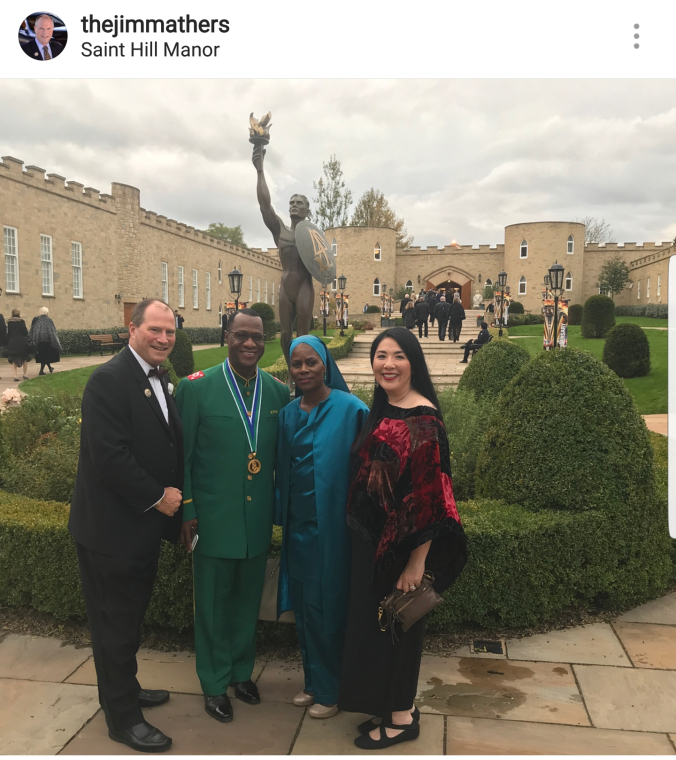 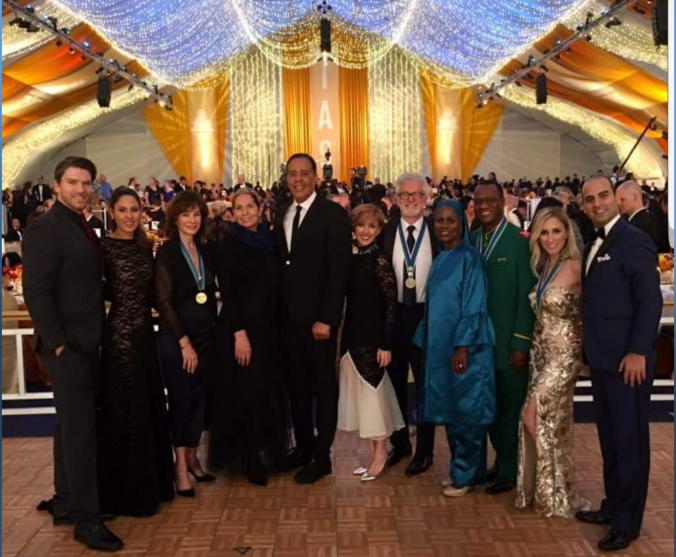 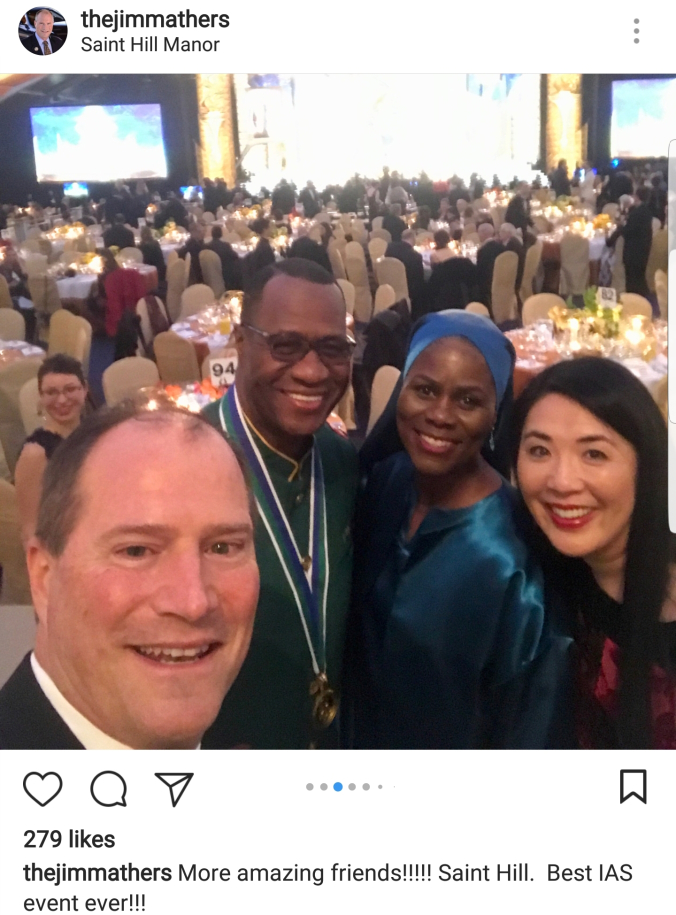 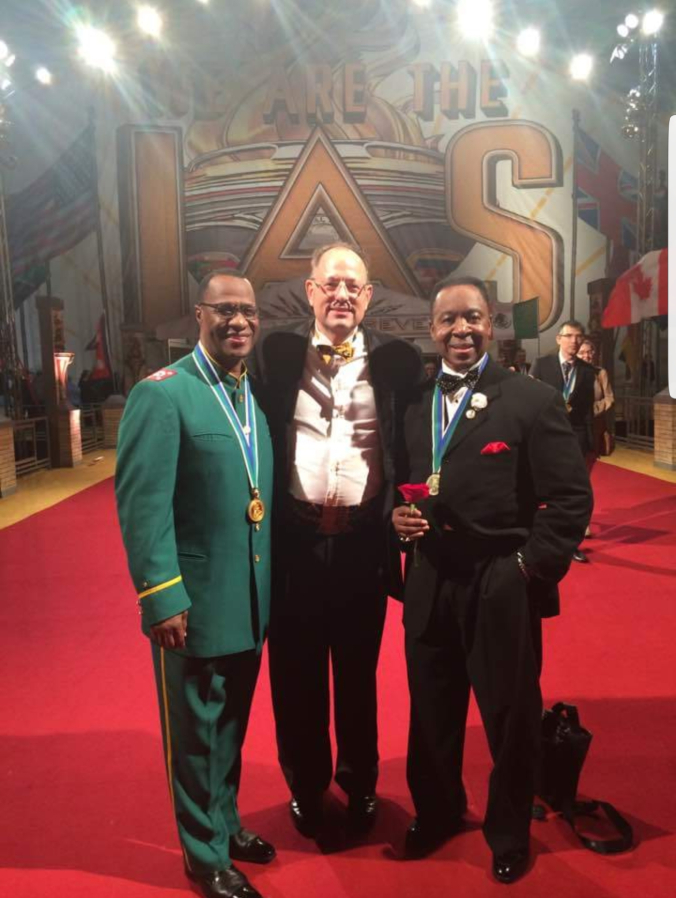 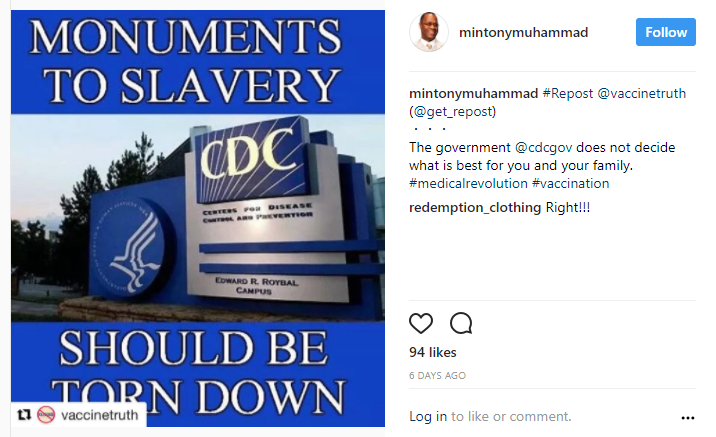 Photographs of Scientology Freedom Medal Winner Nation of Islam Minister Tony Muhammad while being congratulated by Brother Muhammad of India, a Muslim Brother Omar from the Middle East, and a Syrian Imam. 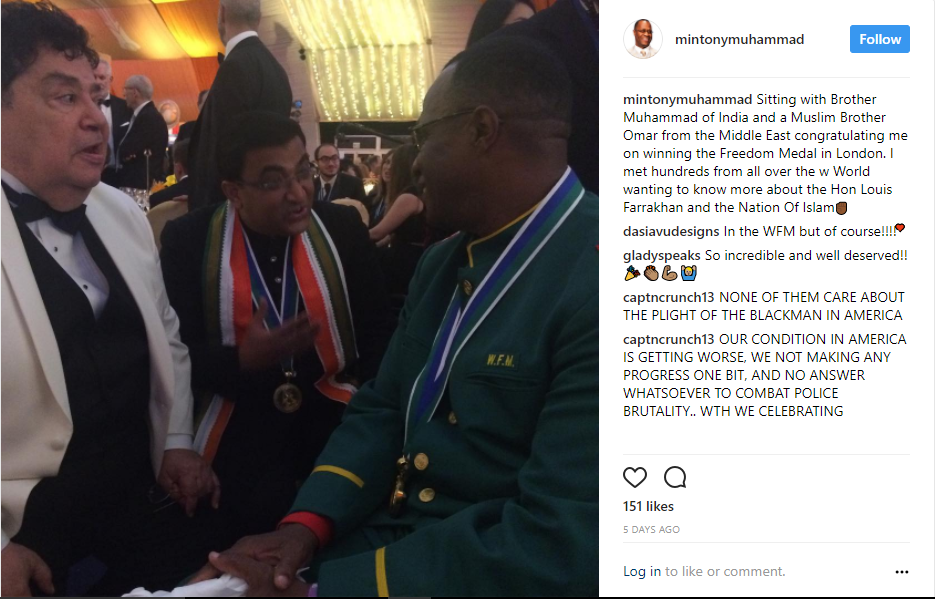 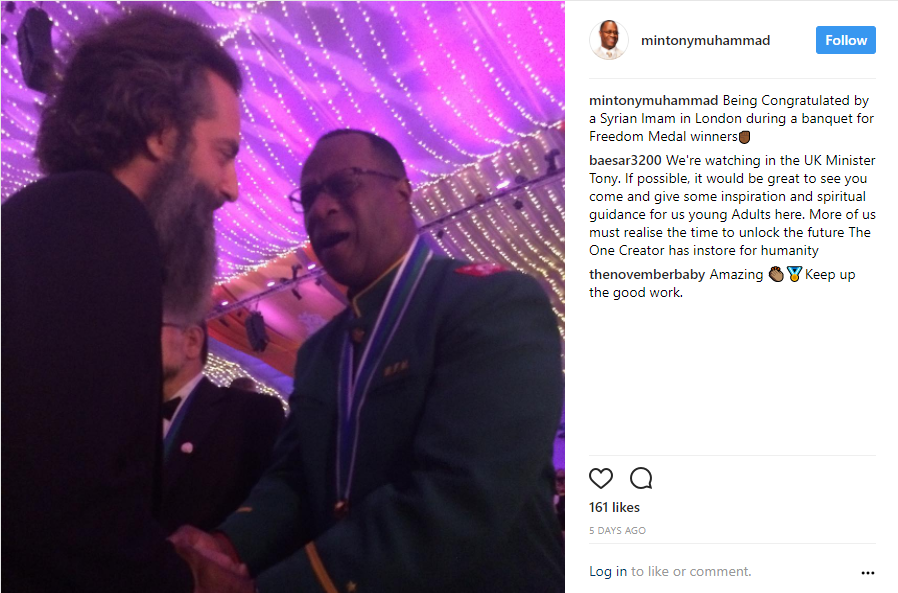 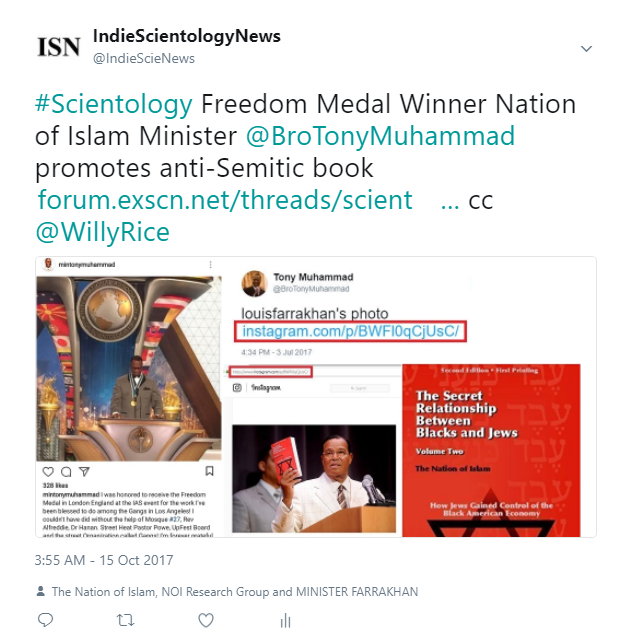 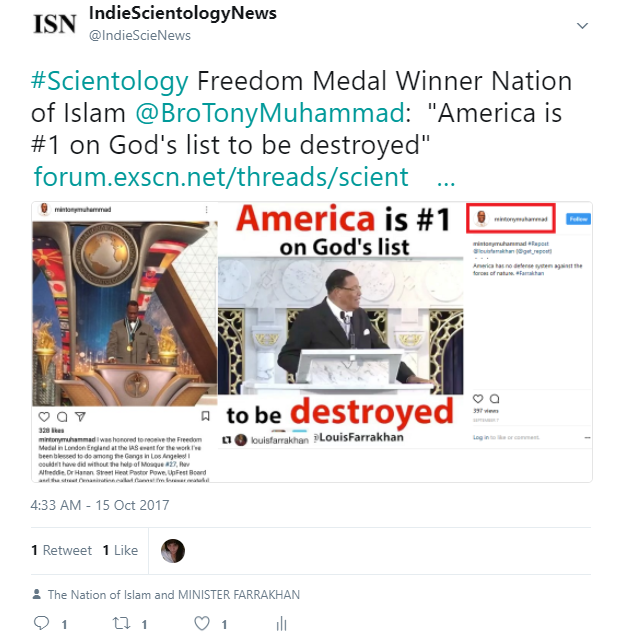 Why should it be assumed that Scientology will suffer any blow-back for this, at a time when former Nation of Islam member Keith Ellison, (who is on record defending Louis Farrakhan and desiring racial separation), is currently second-in-command of the Democrat Party?

Enthetan said:
Why should it be assumed that Scientology will suffer any blow-back for this, at a time when former Nation of Islam member Keith Ellison, (who is on record defending Louis Farrakhan and desiring racial separation), is currently second-in-command of the Democrat Party?

First, I try to stay away from politics here. My purpose in saying that is not to chastise or invalidate you. Just a reiteration of my purpose in posting on ESMB, and my explanation for not responding to your poltical point.

Third, the only way the Church of Scientology will suffer any blow-back concerning the statements by Nation of Islam Minister Tony Muhammad noted in ths thread is if people tweet, cross-post and otherwise disseminate this information So far, the response has been underwhelming and the Church of Scientology has benefitted from its relationship with the Nation of Islam at no cost.

VIDEO:
Nation of Islam leader calls for ‘black only’ state 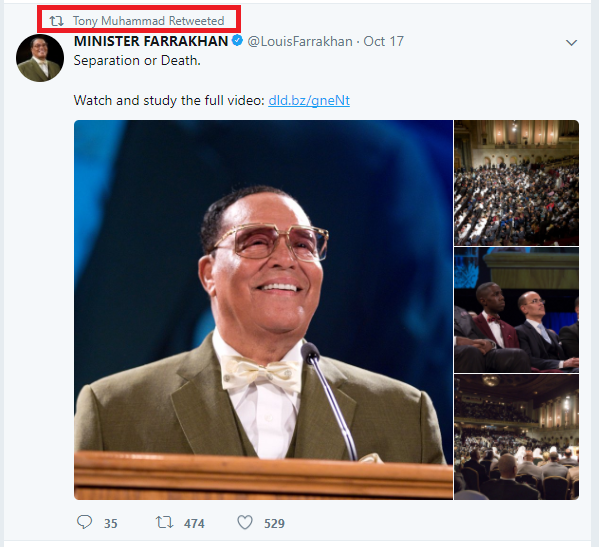 The video and a screenshot. 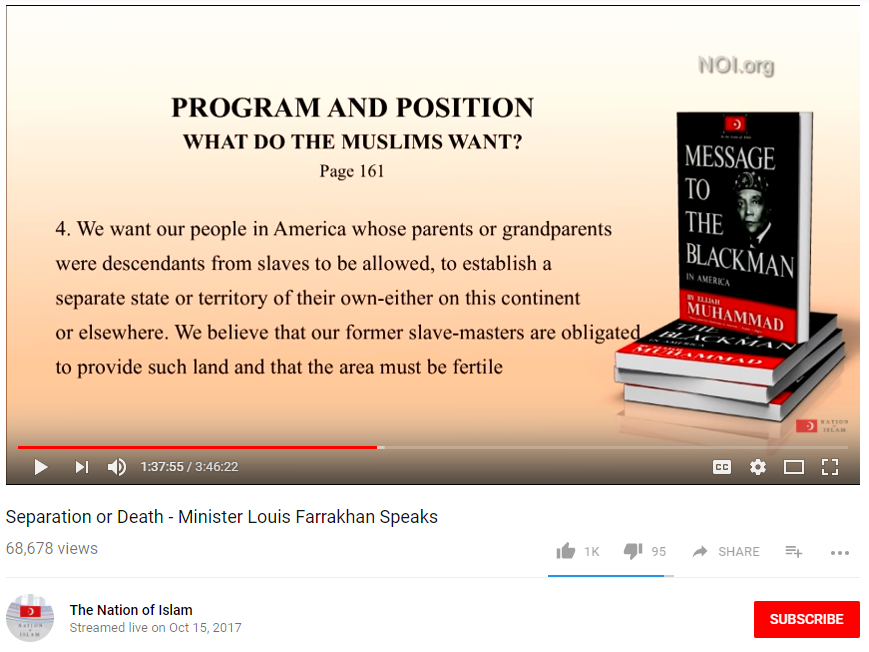 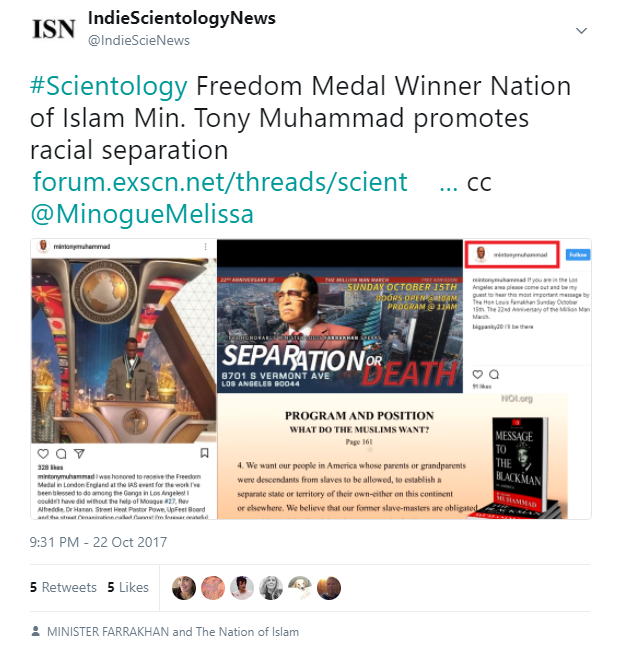 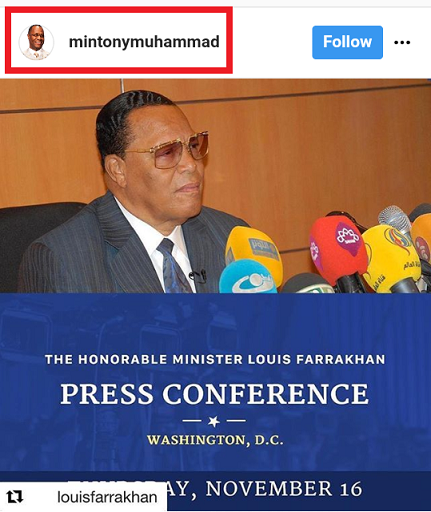 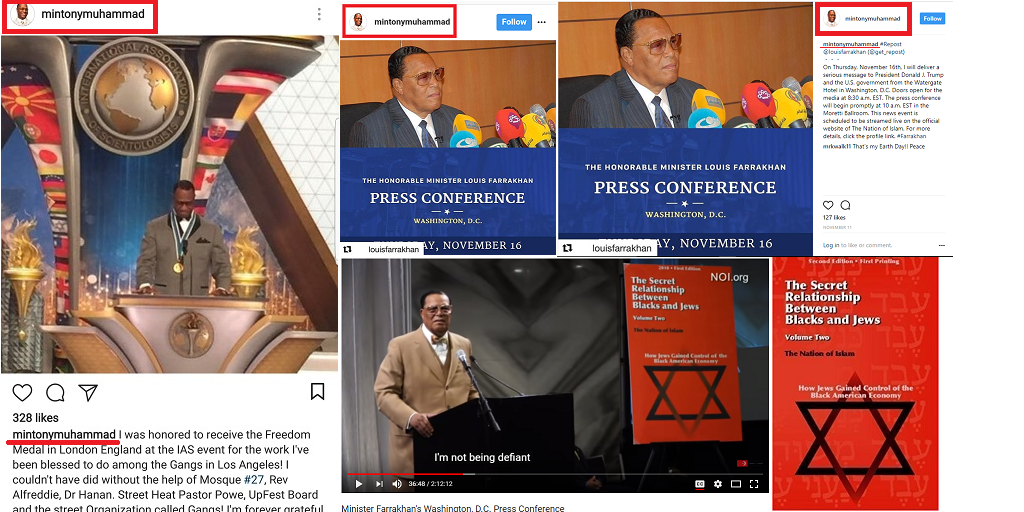 The anti-Semitic statements are not at all limited to promoting the book The Secret Relationhip Between Blacks and Jews (Volumte Two). Please watch the entire press conference for all such statements in context. 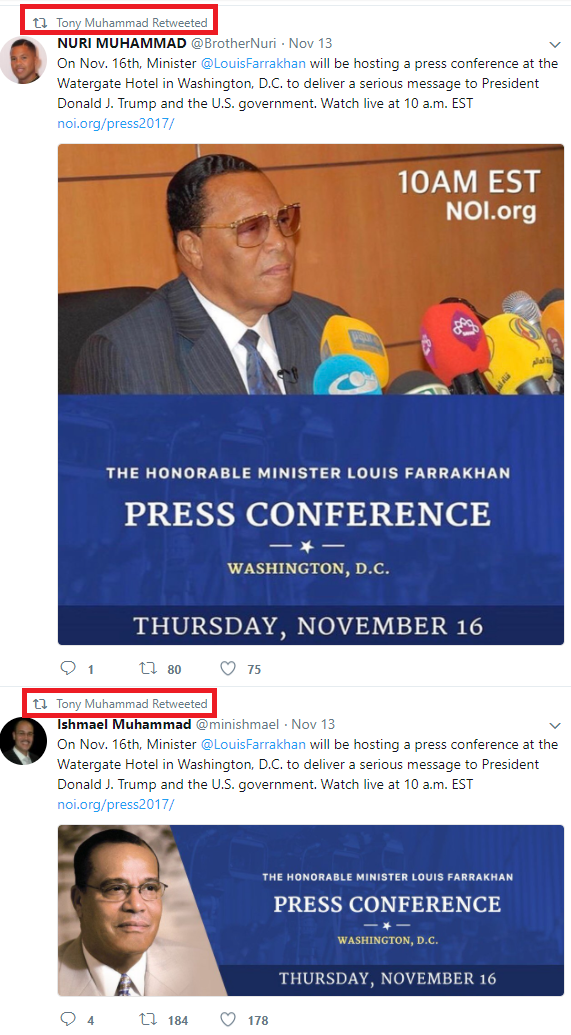 Excuse me I have 2 questions

May be someone can provide with the information

It's because I am against all form of segregation.
All people must be given equal rights to experience all aspects of $cientology in order to experience the totalness of experienceness 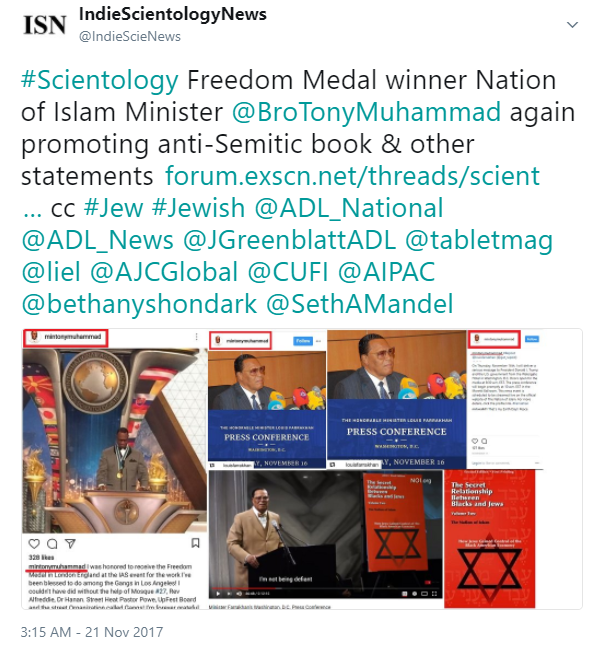 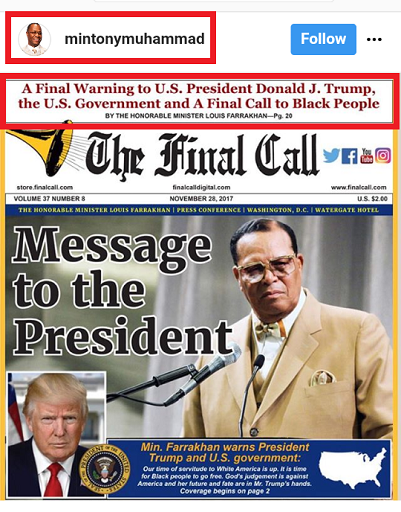 The "Final Warning" is set forth in the November 16, 2017 news conference of Nation of Islam leader Minister Louis Farrakhan:


The "Final Warning" is summarized in the November 21, 2017 Final Call newspaper article:

WASHINGTON—In the ballroom of the historic Watergate Hotel, the building where a Black security guard named Frank Wills set off a chain of events which toppled Richard M. Nixon, the 37th president of the United States from office 45 years ago, Nation of Islam Minister Louis Farrakhan delivered a warning to the sitting, 45th president, Donald J. Trump, to lead this country to “repent for all of the evils that America has done” to Black people, and to all “the peoples of the world.”

“Mr. President, you won’t make America great again, not in our time,” the Muslim leader said. “She became great killing Native Americans. She became great enslaving us, bringing us from Africa into America to work the cotton fields. You’re not going to get that opportunity back anymore.”

The Minister laid out how Mr. Trump is the last in a line of six presidents who have plotted the destruction of Black people. But, the Minister said, God has come to judge and destroy America for her past evils and current genocidal plots against Blacks. 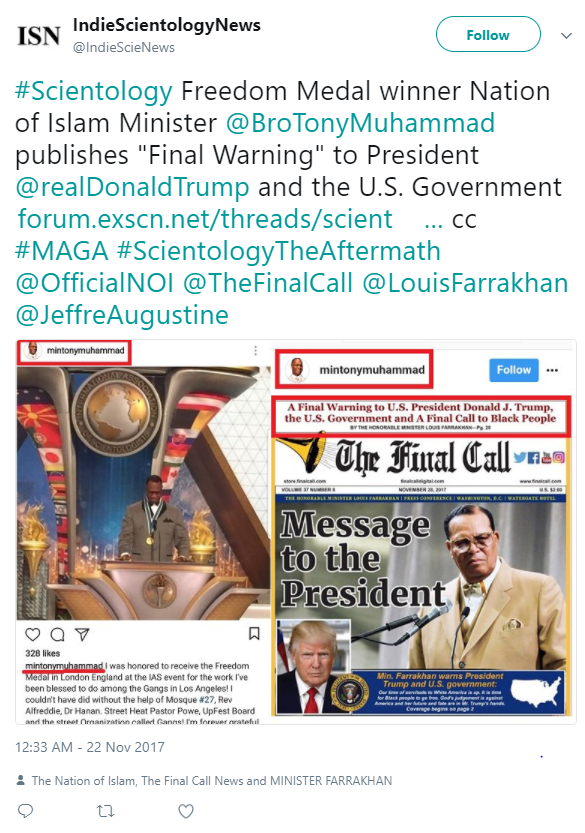 Tony Ortega has a major story on this.

VIDEO: Scientology gives its highest award to Nation of Islam minister, who thanks Allah

Significantly, beginning at around 11:40 Minister Tony Muhammad states: "For now we have come together. We are allies now and partners. This world will never be the same again I promise you in the name of God."

Why does Scientology tout endorsement by NOI minister who promotes anti-semitic book?

Why does Scientology boast re NOI Minister who says, "America is #1 on God's list to be destroyed?"