"She has multiple hustles; she professes to be a singer, songwriter, actress, vegan, certified nutritionist, personal trainer and competitive bikini body builder."

Now she can add politics to her "multiple hustles". She's still young, maybe she will be US president some day, voters there seem to prefer phony hustlers for their president.

"We looked at Hillary and Trump in the months leading up to the election, and we discussed our future prospects, much as the rest of the world did. I don't know many people who could make up their mind as to who they disliked the most, and I think we were at that same level. The closer we got to the election, the more people seemed to wonder which was the least damaging vote to cast on the day.

It's a fact that democracy today works this way: it's the majority that get to decide what government the minority get to have for the next period.

It's also a fact for those who care to remember, that when Obama took office eight years ago, there were protesters and nasty racist campaigns questioning his actual nationality. Also, the first year he fought against Washington – or rather, Washington fought against him: Obama thought he could communicate real issues and reason with people in Washington to make things better. He learned it wasn't so in Washington."

Potential Congressional candidate Joy Villa deletes the address of the Church of Scientology Celebrity Centre from her official website. 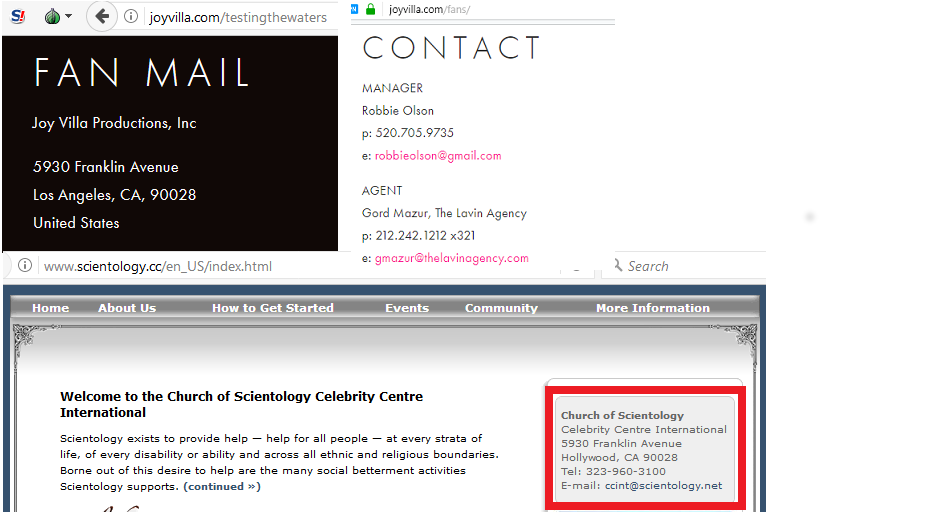 Joy Villa has reached the Scientology religious State of Clear. 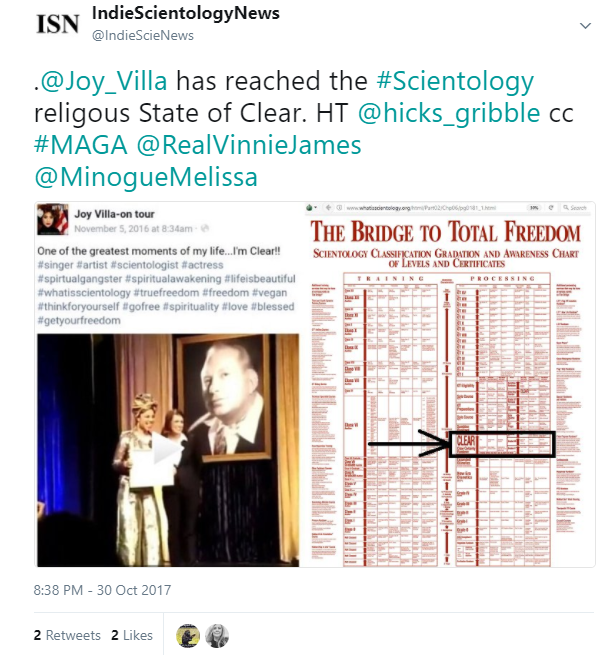 @RealVinnieJames has been instrumental in providing information about potential Congressional candidate Scientology member Joy Villa to the MAGA community. 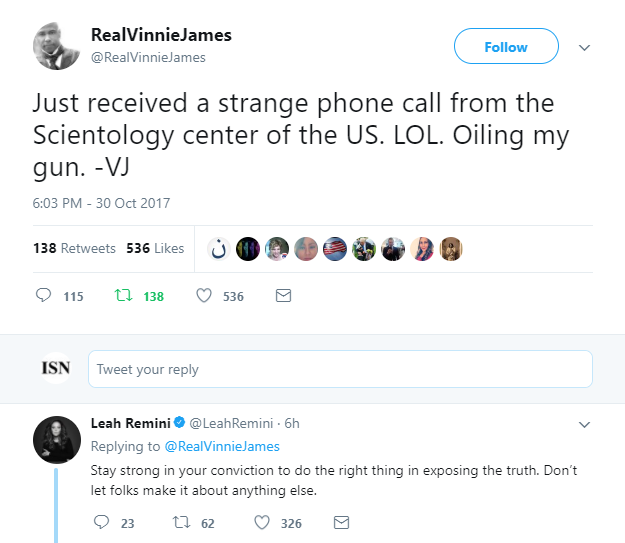 Potential Congressional candidate Joy Villa's trademark is registered to the address of the Church of Scientology Celebrity Centre in Los Angeles. 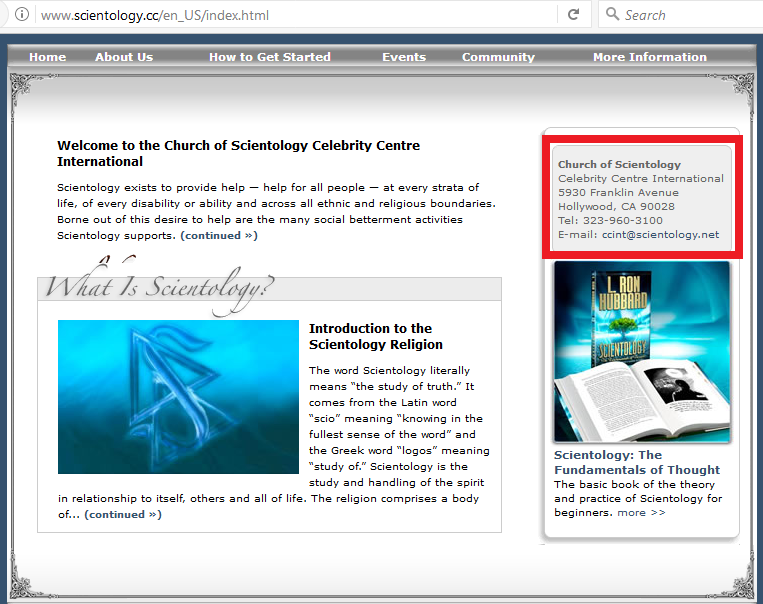 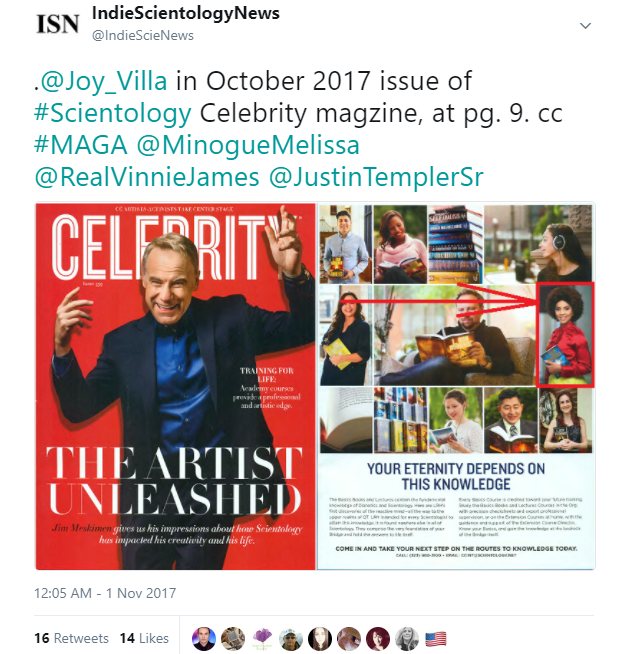 Scientology Celebrity Centre address used by Joy Villa for her: (a) website until deleted after 10/27/17: (b) trademark; (c) corporation. 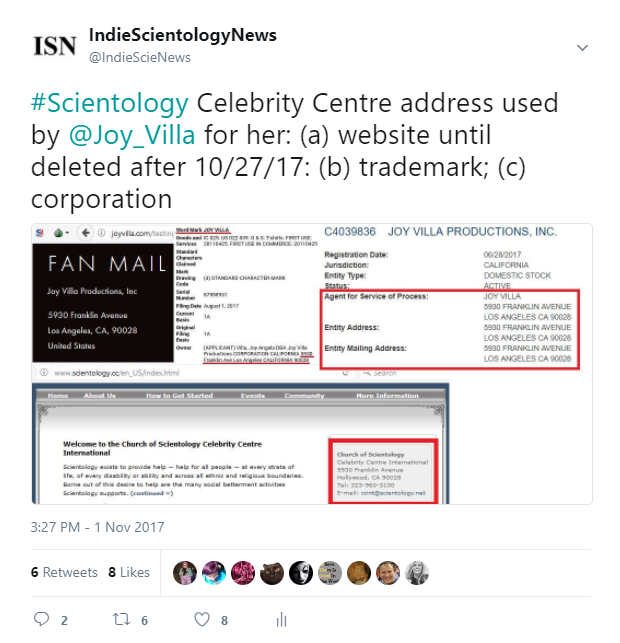 Joy Villa, you say you are a Christian. Would any true Christian say their eternity depends, not on Christ, but instead on Scientology? 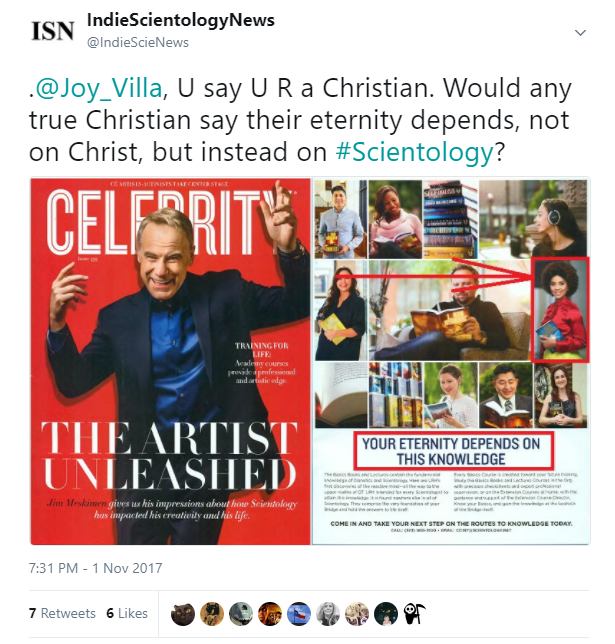 Request: Regardless of your political stance, what is really needed is for exes, OG, and anons who are well-versed in all-things-cult to go on Twitter and help back up the Tweeps who are opposing Joy and the CoS shills. The Sci-bots are out in full force, panicking over this Joy thing because she's been lying through her teeth and people are calling her out on it. But, the Trump fans don't have the wealth of knowledge you all do, so some of them are beginning to pass on misinformation or not seeing the cult as dangerous as it is. Not everyone watches Leah's show...but it has been amazing how many do, lemme tell ya! The first wave of true-blue fairgaming has begun on Twitter against Vinnie James.

Even if you have to create an account, a sock account, and switch your comfortable internet resting place for a few weeks, please help. It will do much more help to counter these church members' tweets and back -up the people trying to get the word out than sitting here or on esnb rehashing things to each other or copy/pasting things. The people who are working on this need the support and they're busting their asses.

Joy Villas says she is Christian and has been since a child when confronted with her Scientology shilling. oh oh​

Since Joy Villa was kind enough to unblock me on Twitter, I decided to start asking her questions in response to her tweets. My first question: "[email protected]_Villa, do U have any response to #Scientology Freedom Medal Winner Nation of Islam Min. @BroTonyMuhammad promoting racial separation?" 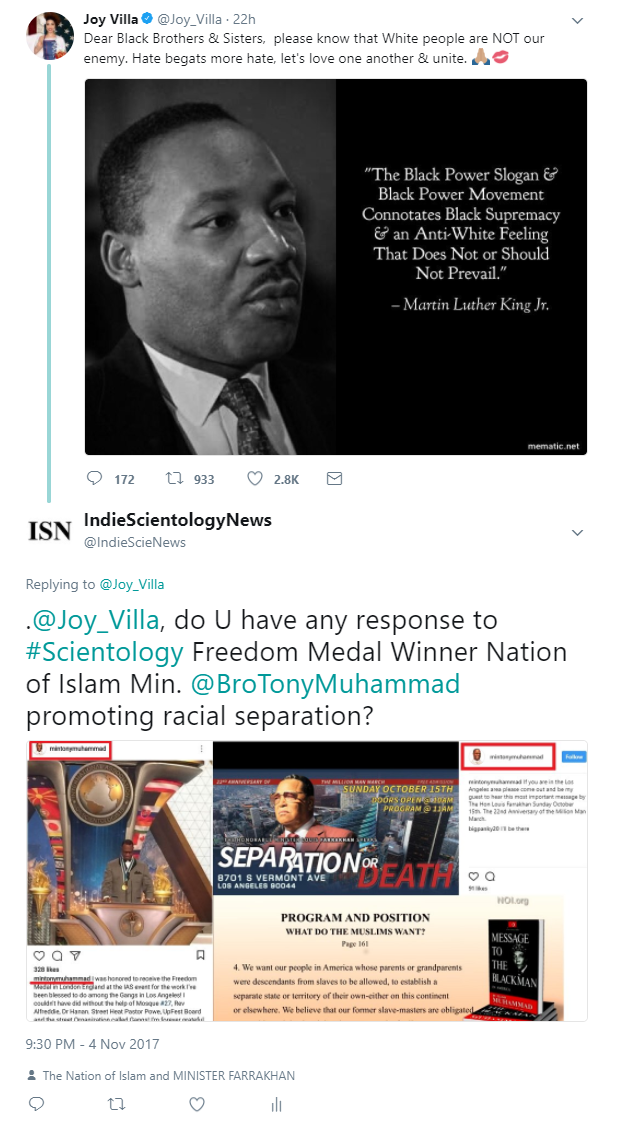 Joy looks good in this interview. It is curious to hear her commenting about Hollywood shunning people who don’t toe the line. I really wanted someone to ask her about the Scientology policy of Disconnection right there.

I have to wonder if she knows what she is getting into? The Republican Party has it’s own conservative, libertarian/Tea Party and liberal wings and as we can see they can be about as opposing to each other as the Republican Party is to the Democrat Party. I have wondered if Joy is doing this out of principle or simply “safe pointing” for the Church. By listing off Trump agenda items here she seems to be identifying her own principles which I interpret to be more libertarian, smaller government, limited regulation, America for Americans, etc.

So how does this square politically with the COS? LRH said the best form of government was probably a benevolent dictatorship. Indeed, the behavior of the COS, it’s policies, and LRH’s stated goals for a world government based on Scientology are consistent with this view, albeit in practice Scientology under LRH wasn’t very benevolent. Of course, the problem with all dictatorships is maintaining the “benevolence” in succession.

I realize this is arguable but in my personal opinion Scientology is fundamentally a utopian redistributionist belief system. I was a Democrat when I joined the Sea Org and the notion that we would save the world from a nuclear holocaust and the failures of mankind through personal sacrifice is much more compatible with a Democrat view than the Republican pragmatic view. Republicans are supposed to believe that these problems can be solved through individual freedom, ownership of property and personal opportunity as opposed to group rights, redistribution and collectivism. Indeed, LRH railed against welfare and communism but the Sea Org is literally a commune and because it follows a militaristic model it is more akin to Chinese or Soviet communism than a hippie commune.

So here on one side you have Scientology pitching reward and punishment based purely on productivity and on the other hand it behaves like a communist confiscatory regime. To be a Scientologist you really must have a redistributionist mindset or the IAS donation scheme would never have gone anywhere. If the remaining core support for the Church is based on IAS donations then it’s core constituency are redistributionists according to personal principle. How much has Joy contributed to the IAS? Does she think the US government should use tax dollars to support Scientology front group programs, to instill Scientology techniques in public schools, for mental health treatment, drug rehabilitation, etc.? Should the constitution be revised to adopt Scientology management principles or LRH’s ideas of government?

I get the feeling that I’m watching the law of unintended consequences slowly unfolding before my eyes. If she is just trying to safe point the Church by warming up to Trump she may see the real vindictive nature of leftist Hollywood type elites and this may alienate her truly into the Republican Party. And if she somehow crosses the COS she may get to see them for what they really are and she may go Leah on them and start demanding that their tax exempt status be revoked, only now as a congresswoman, or if she truly adopts fiscally conservative Republican principles then she may see that the COS is a classic dictatorship confiscating resources for exploitation by an elite under the utopian banner of communism.

LRH said a lot of things that sounded great on the surface while behaving completely the opposite. And for those of us who are well versed in what he said, we know he covered his bases by saying things or creating policies which could be used to cancel out something else that he said to suit his interests depending on the circumstances of the moment. Scientologists are essentially students of double speak whether they know it or not. To be a devout Scientologist you must be able to hold two completely opposing ideas in perfect balance.

///
Villa predicted Cranston will face backlash in Hollywood over his comments
“Oh, they’re going to bash him. I mean, you can’t even be slightly pro-Trump in those circles, I know. In Hollywood it’s ‘you hate Trump and you’re with the group.’ If you say, ‘well, let’s give him a chance,’ they shun you. So he may lose some jobs, even for saying something so conservative as that.”
///

My second question to Joy Villa in response to one of her tweets. 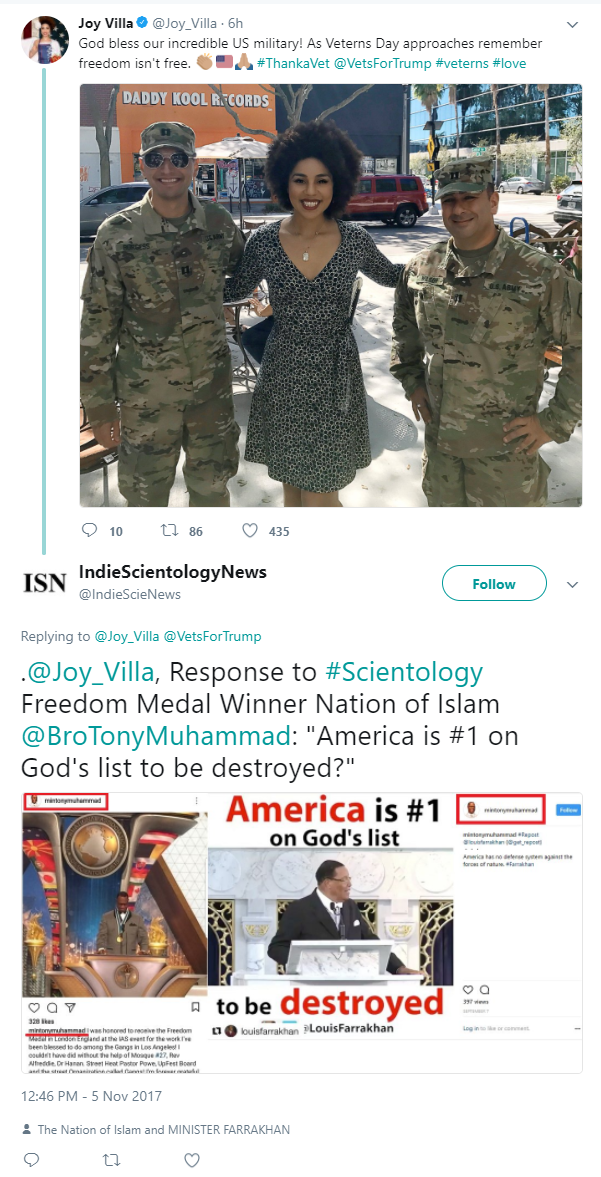 My third question to Joy Villa in response to one of her tweets. 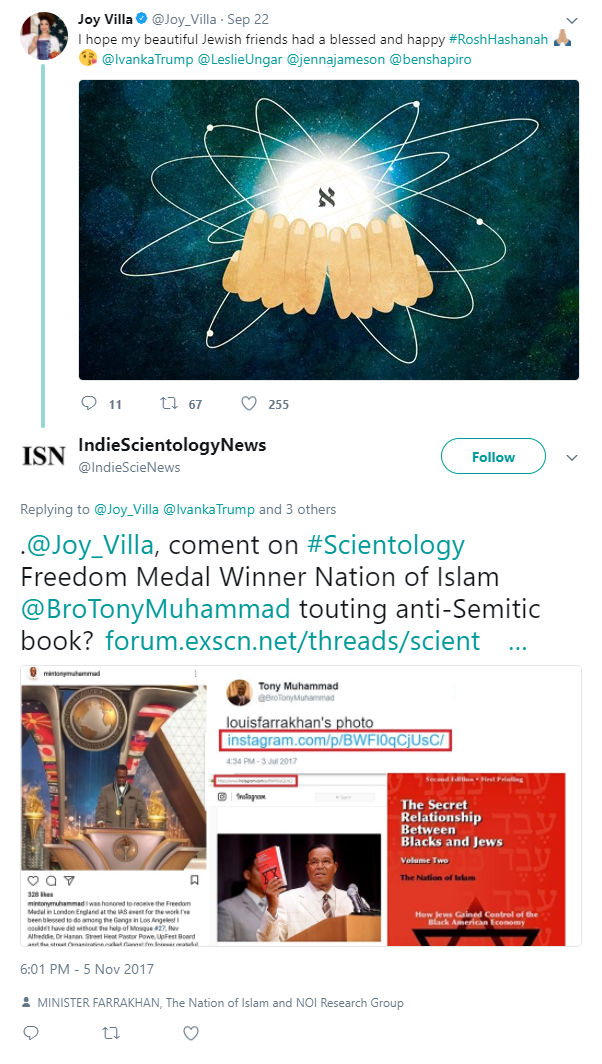 My fourth question to potential Congressional candidate Scientology member Joy Villa. I believe this is relevant given her efforts to obtain support from within the MAGA community. 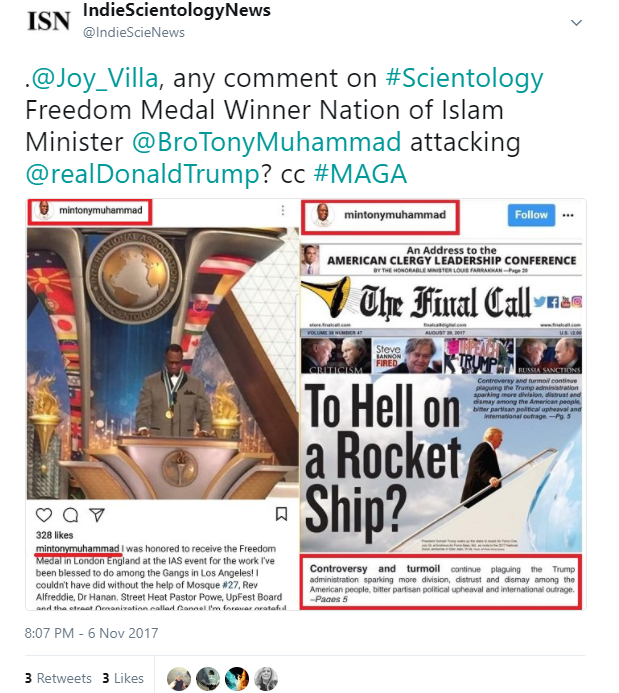 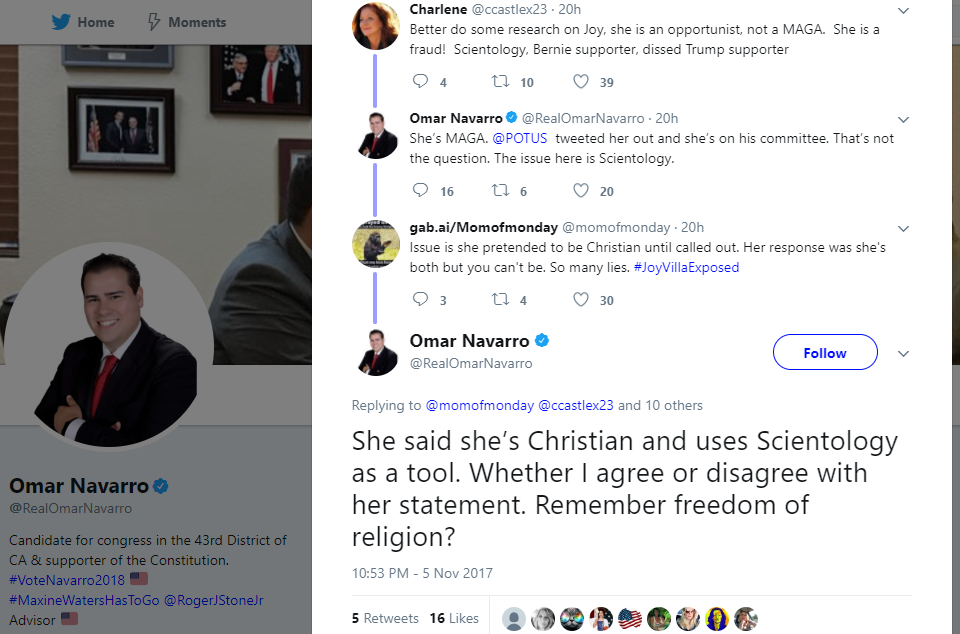 
Today, there is a story that Navarro is on probation for illegal use of tracking device. His probation does not end until March 13. 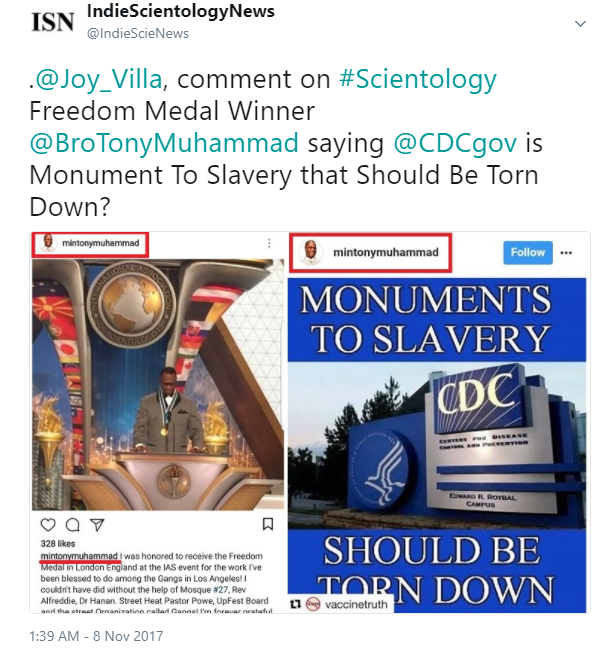 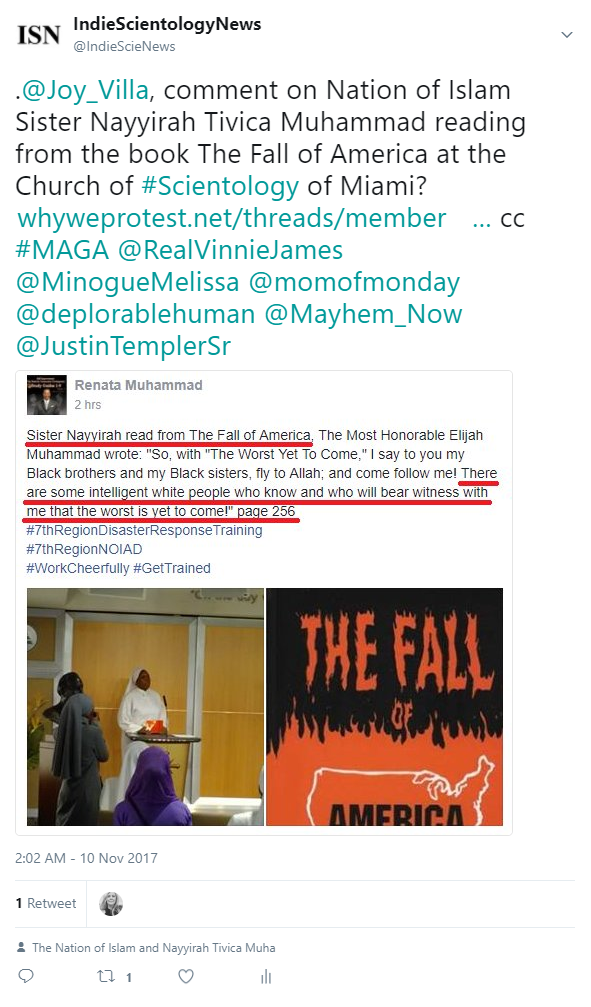 Another Scientologist becomes instant star with Trump supporters, this time in Puerto Rico