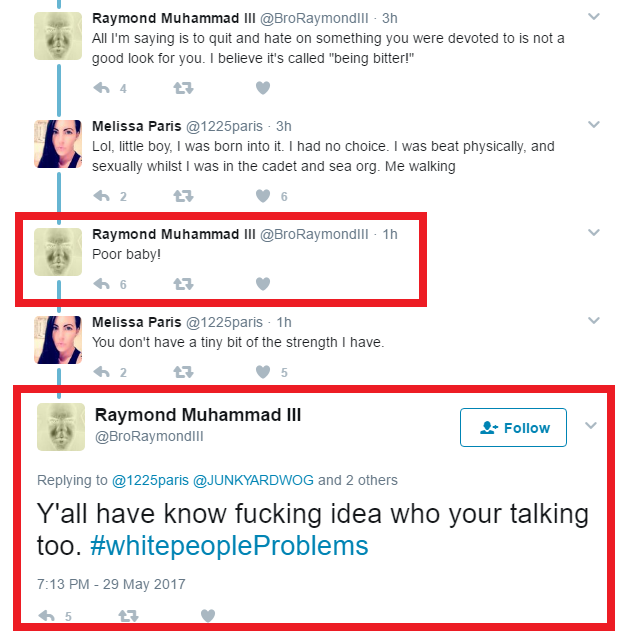 A reminder, Brother Raymond Muhammad III claims the relationship between the Nation of Islam and Scientology was his idea. 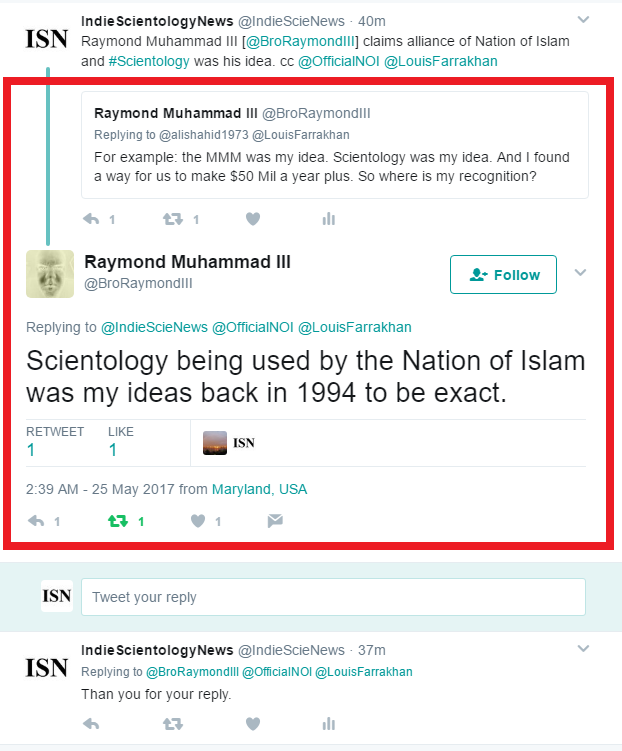 Maybe @BroRay3 will get sent to NOI Ethics for causing a PR flap.

Raymond Mohammad III: "Y'all have know fucking idea who your talking too."

ANSWER: Let me guess who I am talking to. An illiterate street thug who proudly posts a bragging, badass challenge consisting of only 9 words--and misspells 33% of them? LOL.
Last edited: May 30, 2017

Maybe I seemed a bit too rough on Brother Muhammad III, but I had just finished looking at his twitter feed for a few moments and saw some incredibly stupid and misinformed posts.

--promo for the Nation of Islam (cult)

--promo to the FBI with a photo of an e-meter and an "r-factor" how Hubbard's e-meter is the reason they were not able to investigate Scientology (OMG, LOL)

--promote to football player Colin Kaepernick (social justice warrior who got dropped from all professional football teams after he staged way too many "protest" stunts against the country that made him a multimillionaire) with a photo of the e-meter, boasting this message: "@Kaepernick7 with this you can solve the problem of injustice that exists today and all through history."

--videos of him giving "briefings" where he is not only humiliatingly clueless about the subject he pretends to be the "authority" on--he goes even further into absurdity by making up absurd "facts" such as: THE REASON THERE WERE RIOTS BY BLACKS WITH VIOLENCE AND MASSIVE DESTRUCTION AND ARSON IS THAT THE POLICE MAKe OVERTIME PAY WHEN BLACKS GO ON CRIMINAL RAMPAGES, SO IT'S THE POLICE'S FAULT ENTIRELY! (yes, he actually belives that, lol)


This guy will accept ANY superstitious, conspiratorial tin-foil or kool-aid without the slightest concern that he is sounding like a complete clown. Example, just after promoting the cult of Scientology and the cult of NOI, he posts highly favorable comments about Zodiac Tech, as follows:

Brother Ray Muhammad sure can spot workable scientific tech, can't he? LOL
Last edited: May 30, 2017
You must log in or register to reply here.

"Blacks need Scientology and Nation of Islam to help resolve their conflicts."
4 5 6