Scientology not a true religion - poll. Quoted posts by others from Ex Scientologist Message Board are in sienna (brown).

I just had to vent a little about a pet peeve I have. People who, even though critical of this cult, still call it a church.

It's well documented that the whole church facade was taken on by Laffy for the benefits it bestowed, like potential tax exemption, the e-meter being protected as a 'religious artifact' to avoid being prosecuted for using it to treat medical conditions, etc. They went from being a clinic with 'doctors' to a religion with 'ministers', but the practices stayed pretty much the same.

Scientology is a money making fraudulent cult, not a church.

I like the adage attributed to Abraham Lincoln that goes 'How many legs does a dog have, if you call the tail a leg? Answer; four. Calling the tail a leg doesn't make it a leg.'
Click to expand...

Tax exempt status had been sought by Hubbard since he first launched his "religion angle," complete with ministers in clerical collars, crosses on "Churches," and the accompanying benign-sounding 'Creed of the Church of Scientology', meant to invite agreement from "wogs," as they were "gradiently" led into agreement with the idea that Scientology is a "religion."

It's the religion angle and religious cloaking that allow Scientology to get away with so much fraudulent and abusive behavior.


About the IRS deal with Scientology:

"Scientology 1970 is being planned on a religious organization basis throughout the world. This will not upset in any way the usual activities of any organizations. It is entirely a matter for accountants and solicitors."
Click to expand...

This man was convicted of "interfering with a religion," for picketing outside Scientology's heavily armed, razor-wire enclosed, base outside Hemet, California. He was sent to jail. 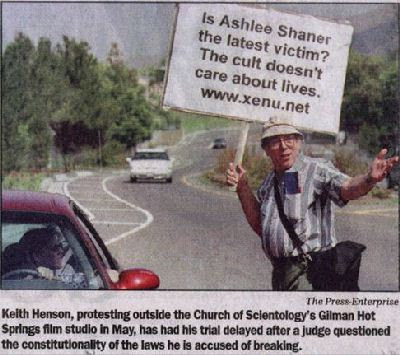 Membership Service Organizations
International Association of Scientologists Administrations, N.V. (IASA)
Membership Services Administrations (UK) Ltd. (MSA)​
There are 41 names there, only 5 of which include the C-word. Local service orgs in the US and other religion-favouring countries usually include the C-word, and in countries that don't favour religions they don't. Expediency reigns supreme.

Question for any residents of the "non" countries: when the cult hits the news there, is the main organization ever referred to, or is it just the name of the local branch? For example, does the media in Russia ever refer to CSI spokeperson Karin Pouw by name and title?

Scientology has a decades long history of using the "religion angle" and "religious cloaking" to gain advantage, and to exempt itself from inspection and from laws.

Scientology is a for-profit blackmail-collecting global scam masquerading as a religion.

Prof. Steven Kent on 'Is Scientology a Religion?':

Scientology doesn't really care whether some "wogs" or "SPs" or "DBs" think it's a "good religion" or a "bad religion." The "wogs" and "SPs" and "DBs" can argue about that all day long, as long as Scientology is regarded as a "Church" and a "religion."
Click to expand...

It's rare to encounter a Scientologist who knows what Scientology is, not because they're stupid, but because Scientology discourages its followers from finding out what it actually is and, ultimately, places them in a state of mind where they don't want to know even when they have the opportunity.

A few bus loads of people such as this are useful for Public Relation purposes, especially when they are wearing big yellow Scientology is my religion buttons.

These are the well-intentioned dupes, and are an essential component of the Scientology charade.


Responding to the assertion by another poster that Scientology's status as a (tax exempt, and exempt from various laws) "Church" is a "done deal":

I'm with Veda on this. Only in the US is it anywhere near "a done deal". In mexico it is a "philosophical society."
Click to expand...

"What we are seeing is a worldwide pattern of abuse and criminality... On the body of evidence, this is not happening by accident; it is happening by design.
Click to expand...

In 1955, L. Ron Hubbard secretly authored this booklet http://www.forum.exscn.net/showthread.php?2697-Table-of-Contents-Psychopolitics-revisited to be used as a black propaganda vehicle for attacking his critics, by identifying them with Russian Communism. Some years later, the booklet slowly faded into obscurity. It was no longer useful as a propaganda vehicle. During the period of the Vietnam war, Hubbard had decided that "Nazi," not "Communist," was a more effective "button" to push, to influence public opinion to Scientology's advantage. Another reason for this booklet fading into obscurity was that Hubbard was now using many of its ideas and methods on his own followers, and on others. Hubbard had been doing this for many years prior, but it was now intensified. These ideas and methods are interwoven into Scientology doctrine, and integral to that doctrine.

It's noteworthy that the first official body to recognize Hubbard's use of this booklet's ideas and methods was from Australia in the 1960s and, now, another Australian official is continuing the tradition of insightful and courageous truth-telling regarding the secretive cult of Scientology.
Click to expand...

From Free to shine:

Why not just call it scientology???

I have never called it a church and I never will. I don't even use a capital S unless it's the start of a sentence. I was there when it was decided that it should be a religion, and I know what a farce it was.

I think it's only those who feel the need to be politically correct who use the word "Church", in the media and so on to avoid getting dogpiled for 'religious discrimination'.
Click to expand...

In 1994, one of the used (Im not saying correct, just one of methods used) ways to guess who was either OSA or duped by osa or too dumb to be of any worth to the expose scientology movement anyway, was to see if they could say "XENU"...

Ten years later, the rule of thumb *I* use, on all except for the very-newest-escapees, to determine this is DO THEY CALL IT A CHURCH or refer to it as a RELIGION. I feel it works for me, you're mileage may vary.

Thoroughly understanding the materials collected on my RELIGIOUS CLOAKING PAGE leads to the inescapable conclusion that $cientology is an elaborate hypnotic FRAUD that has been CLOAKED using RELIGIOUS CLOAKING.

This point is not lost on their own lawyers, and thorough application of such comprehensions demonstrated here.. in the last time $cientology tried to depose me in 1997 at the Law Offices of Mr Sinclair in Alexandria Virginia, a camera had been set up to video this, if you want proof ask OSA to post this video:
DEPOSITION STARTS
Clam lawyer Rosen asked: Mr Lerma, why do you continue to say bad things about the Church of Scientology???

Lerma: Mr Rosen, in your question, are you referring to the international psychopolitical terrorist organization running a rapidly shrinking but still brisk fraud upon innocent citizens worldwide dba scientology and related entities and front groups???

Lerma: Mr Rosen are trying to trick me into committing perjury on your behalf?

Rosen: This deposition is OVER.

Try to remember this one lesson:

A person takes his first step to becoming a scientologist when they start to believe the first one of scientology's LIES and they are NOT really out of scientology's field of influence until they stop believing every lie.

Lermanet.com Exposing the CON since 1993 Free to shine said:
All these great quotes would be more easily read if they were broken down into quote boxes, then it's not a wall of text and you can see where one starts and the next begins. Much easier than different coloured font. Just hit the Quote icon, paste between the tags. Or select text then click Quote. Sometimes it's really hard to see if you have actually made a comment in there as well, or if it's all copy and paste.
Click to expand...

That's why I used extra spacing and a different color for other posters quoted.

It would be easy enough for another to "box" the various quotes, if that was desired.

Oops! I just noticed that you already did it instead.

PS... If Arnie Lerma sees this, yours would seem to be the preferred version for linking purposes, and it is more crisp and readable.

That's why I used extra spacing and a different color for other posters quoted.

It would be easy enough for another to "box" the various quotes, if that was desired.


Just paste the quotes into notepad or something, I do that a lot. Re-quoting can be complex for sure. Once notepad is open it's easy to paste it in. I do a lot of that when I am listing on ebay for instance. Or perhaps a master doc with the main quotes on that subject.

Free to shine said:
Just paste the quotes into notepad or something, I do that a lot. Re-quoting can be complex for sure. Once notepad is open it's easy to paste it in. I do a lot of that when I am listing on ebay for instance. Or perhaps a master doc with the main quotes on that subject.
Click to expand...


Thanks. I know it can be done but, short of having the instructions above, many persons wanting to respond to content in a box are left with an unquotable empty space.

There doesn't seem to be a perfect solution, but at least we fixed this one post.
You must log in or register to reply here.

Jason Beghe: 'Scientology is Not a Religion'