The Church of Scientology Ordered Aaron Smith-Levin's in-laws to sell their property across the street so his kids can't see them. They have complied. The houses were sold last week. 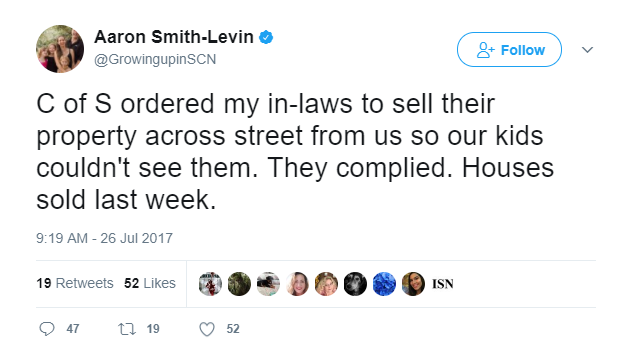 
CommunicatorIC said:
The Church of Scientology Ordered Aaron Smith-Levin's in-laws to sell their property across the street so his kids can't see them. They have complied. The houses were sold last week.

Miscavige and his OSA and legal minions go (fall) completely off their rocking chairs with this absurdity.

Where are the youth for human rights protests of the violations of The UN Declaration of Human Rights?

No one shall be subjected to arbitrary interference with his privacy, family, home or correspondence, nor to attacks upon his honour and reputation. Everyone has the right to the protection of the law against such interference or attacks.

But there is good to come from this.

Since scientology can't hide anymore and they are fleeing from happy neighbours and their children there comes a solution.

For a mass migration of critics and other SPs to move into Clearwater and precipitate the fleeing teck of the cult to be implemented and the cult selling and moving out. Far out into the Van Allen belt to join the NOI mother ship.
You must log in or register to reply here.

Diva Gustafsson, who 4 Scientology accused her friend of lying re child sexual abuse

A story of Disconnection, neglect and suicide in scientology
2