Is the Church of Scientology's Montreal expansion project paralyzed? 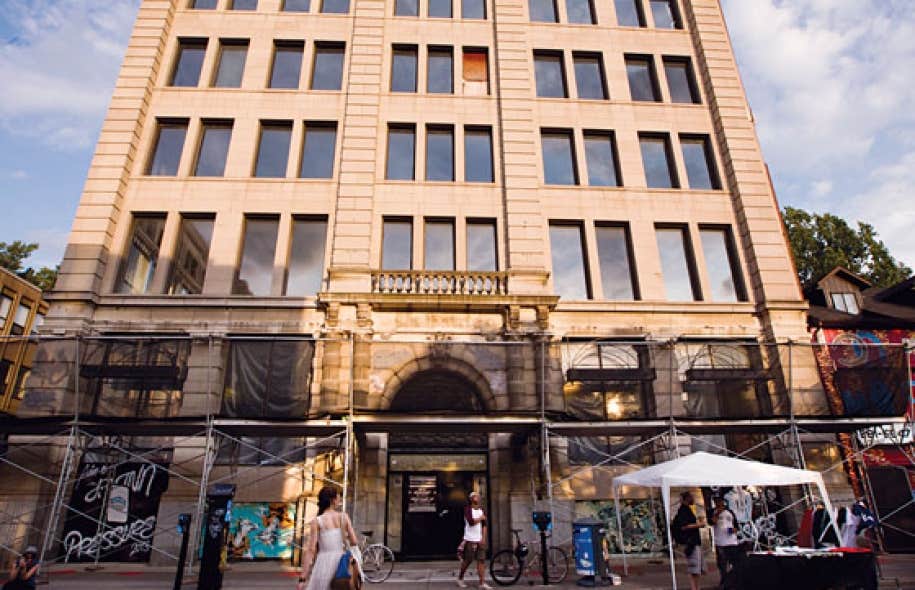 No work has yet begun on the beautiful six-story stone building purchased by Scientologists in 2007
Photo: Annik MH De Carufel - Le Devoir

The Church of Scientology's vast real estate project is still moving forward in Canada. Even though the project is not progressing at the pace desired by the organization, the Scientologists swear they will transform all of their often worn-out looking buildings into welcoming and modern facilities. But there are obstacles that seem to be paralyzing certain projects, including the one in Montreal.

On Saint-Catherine Street, the building formerly occupied by the La Patrie newspaper is slated to become the new home of this controversial international organization that is recognized as a religious corporation in Quebec.

No work has yet begun on the beautiful six-story stone building purchased by Scientologists in 2007 at a cost of $4.2 million. After hosting an art gallery last year, the building is now vacant.

Scientologists nevertheless want to turn this site into a magnificent temple which they call an "ideal organization," like the one that opened in Quebec City's lower town in 2010.

Founded in 1954 by science fiction author L. Ron Hubbard, the Church of Scientology sells expensive courses and therapies that are supposed to purify the body and the mind. The organization says that its goal is to make way for a world without war and criminality. And to achieve this goal, it must build "ideal organizations" around the globe.

The Church of Scientology claims that the Montreal project is not experiencing any delays. The building is still in "the design and planning phase," asserts Erin Banks, spokesperson for the organization in Los Angeles, in reply to Le Devoir. The president of the Church in Canada, Yvette Shank, emphasizes that, due to the age of the building - built in 1905 - the planning stage is longer.

In 2010, however, Ms. Shank said she hoped the new facilities on Saint Catherine Street would be inaugurated at the end of 2011. The building's expected opening date has also been postponed several times on the organization's website.

If the Montreal project seems to be faltering, things are moving ahead elsewhere in Canada. In February, hundreds of Scientologists gathered in Cambridge, Ontario, to celebrate the opening of their "new church." Like the one inaugurated in Quebec City, the two-story building welcomes visitors in a flashily appointed and bright environment. It includes training rooms, a chapel, an information center, and a sauna.

In Toronto, the organization's headquarters in Canada, all activities have been temporarily relocated because of the major renovations planned for the eight-story building located a few minutes from Queen's Park. At a bit more than an hour's drive from Toronto, the Scientologists also own about 80 hectares of land that they want to convert into a training center.

In Winnipeg, the scenario is similar to Montreal. The Church of Scientology owns a historic six-story building in the stock exchange district. There too, the renovation work is in the planning stage.

This real estate strategy implemented at costs of millions of dollars in all countries where Scientologists are present has been drawing a great deal of criticism.

One of the movement's best-known critics is Mike Rinder, former communications director for the mother Church of Scientology. This longtime Scientologist who left in 2007 considers these "ideal organization" as nothing but a scam. "If Montreal and Winnipeg had the money to renovate their buildings, they would have done it," he wrote in an email exchange with Le Devoir, adding that this program is a strategy of the church's current leader, David Miscavige, to raise money. Mr. Rinder asserts that the Church of Scientology uses these buildings to claim that the organization is growing.

For its part, the Church declined to answer any questions from Le Devoir concerning the costs of its real estate strategy. The official reason for this vast project, Erin Banks insists, is that: "The Church of Scientology is experiencing a great period of growth around the world."

This claim is difficult to verify. Statistics Canada data indicates there were only 1,745 Scientologists in Canada at the time of the 2011 census, compared to 1,525 in the 2001 census.
Click to expand...

Money has to be a problem. No home equity loans these past 5 years - how would a regular person fund their Scn addiction?

The truth is the goal was never open it - it was to own it! Everyone is broke - so Slappy can justify selling it and whala ! Super Bank Account - and he did not have to do anything but issue Command Intention orders. He can now sell it!! "We are opening this year" after year after year is the successful action for the Super Power fleecing of $250 Million from the members - most of them inactive, kicked out or declared or sitting on the fence never to go back in. He will open it and deliever "something" but rest assure yourself - you won't be seeing any Super Powers anywhere!!

What did Hubbard say about repeating successful actions?
You must log in or register to reply here.