Scientology's Shame: Lisa McPherson, 16 Years After Her Death
On December 5, 1995, a 36-year-old woman perished while several people were taking her to a hospital in Florida.

Within a few years, the mysterious and strange circumstances around the death of Lisa McPherson -- who had been a Scientologist since the age of 18 -- had the Church of Scientology facing a criminal prosecution, generated the worst publicity for the church since it was raided by the FBI in 1977, and inspired a new generation of critics who ever since have kept close watch on the controversial organization.

Lakes of ink have already been spilled writing about Lisa McPherson. Earlier this year, we placed her #10 in our series, "The Top 25 People Crippling Scientology," and in that piece, we printed excerpts from probably the best, most moving journalistic telling of Lisa's story, in Janet Reitman's excellent book, Inside Scientology.

Rather than write yet again about this piece of Scientology history, we wanted to turn things over to our loyal readers. After the jump, we're printing some brief tributes from readers who were asked what Lisa McPherson has meant to them in their own lives. And we hope in the comments section, you'll do us the honor of adding your own tribute.

Jeff Jacobsen is an old friend of ours, and played a key role in the McPherson saga. In Arizona at the time, he spotted an online notice by Clearwater police who were looking for information regarding a suspicious death. Jacobsen recognized the address as Scientology's Fort Harrison Hotel, and brought it to a Tampa reporter's notice. And so began a publicity firestorm. Jeff sent over this remembrance:

Through strange historical and legal twists, we know perhaps more about Lisa McPherson than any other victim of Scientology. Because of this, she stands out as a representation of all that is wrong with this organization. Even when they think they are doing the right thing, the result is pain and even death for the recipient of their "care."

When I first saw Lisa's name, I had never heard of her before. Neither had any other critics and ex-Scientologists that I asked. Cheryl Waldrip of the Tampa Tribune, bless her soul, used her journalistic skills to dig out the major points of Lisa's life and death. The civil lawsuit Lisa's family filed, and Florida's brief criminal case, also exposed the inside information on how Lisa died. As more information came out, what unfolded just made Scientology darker and more egregious than us critics had even known. And for others it presented what they knew all along but couldn't get anyone to listen to.

Lisa's life to me is simply tragedy. It's sadness. And it's the impetus for me and many others to make sure as much as we can that Scientology stops hurting people.

I didn't know Lisa or her story until I started searching the 'net in 2002. It shocked me and confirmed my doubts about church management. Her treatment at the hands of Flag staff was horrific, very different than any Scientology I had studied. I read the felony indictments and many of the police interview transcripts. The interviews screamed to me of cover-up with obvious lies, 'acceptable truths' and misdirection on the part of the interviewees. It chilled me to realize I had been forced to sign a document allowing Scientology to similarly imprison me as a requirement for starting on the 'OT' levels at AOLA.

I hated that I had never been told the truth. I had been told lies to make me donate to the IAS to fund defense of this atrocity. That is fraud. It all made me furious, and I searched more, finding the lies, mistreatment, "acceptable truths" and misdirections involving Hubbard's death, the FBI raid, the 'religious freedom crusades, and
nearly every crisis Scientology had been involved in. Finally it took me back to the actions and character of Hubbard himself. In documents, trial transcripts, testimony and Hubbard's own words it became clear he was a lying con man, a fraud who used lies, fabrications, 'acceptable truths and misdirection to keep himself out of jail and defraud thousands of people while hiding his true intention to "make all men my slaves". Scientology, despite some positive content, is his creation and bears his pathology in every fiber.

Lisa's story makes me glad that I am no longer in the Sea Org or involved with Scientology and makes me love my boyfriend even more (a wonderful Anon who opened my eyes and got me out of Scientology).

I saw many things while I was there: people, very sick people going without medical care and I was told that the only reason they were sick was because they were PTS to an SP and that almost always ended up bad for the person.

They were either disappeared or disconnected from family or loved ones.

Lisa and the many who are kept prisoner behind those walls are who I protest for.

I protest against Scientology not only for myself, but for them as well.

So that one day they will all have justice.

So that one day they will be free and so that someday no other is caught in the trap that I was.

As a non-Scientologist, I stumbled across the subject in a religious studies class in college. With a paper due and all mainstream religions already being covered,I decided to Google controversial religions. Scientology was first on the list, I Googled that next. Lisa McPherson's name displayed in bold letters in front of me.

Eager to learn all I could, Lisa's tragic death captivated my interests. I holed up in my room, devouring every source of information available and found myself obsessed with knowing more. How could this happen in our country, the land of the free?

I could never imagine how profoundly Lisa's life and untimely death would affect my life. Years later, I'm far from an expert on Scientology but I have educated myself in its teachings and beliefs.

In this journey, I have met others like me who desperately want to help those that are trapped in Scientology. I've made a friend that I consider family, she is a former Scientologist currently suffering the effects of the dehumanizing policy of disconnection. Without Lisa's gut-wrenching death at the hands of Scientology, so many would remain ignorant of the CoS's abuses. I will never forget you, Lisa, and we will always fight in your memory.

Her death demonstrates the continuing ethical bankruptcy of the organization and its members. It was OK to ignore her growing mental illness, it was OK to cover up how she died, it is OK to obey orders, because being a Scientologist (TM) is more important to them than anything else.


Clearly, Lisa McPherson has been a major inspiration to many Scientology watchers, who tend to believe that the more Scientology tries its best to be secretive, the more it must have to hide.

In our comments section, please tell us what Lisa has meant to you. We look forward to reading your words.
Click to expand...

From the Comments section at the bottom of the page.

Nancy Many 6 hours ago
About 6 weeks s after Lisa McPherson died, while under the 'care' of the Sea Org and OSA, and as we now know -- DM, I was brought into OSA, on the 12th floor - to be interrogated. This went on for days and led to the same result as with Lisa. The world may not have known what happened with Lisa, but OSA did. I am certain that because of her, I was not taken somewhere under guard. I often think of how close I cam to meeting her fate, if she had not fallen before me. Lisa McPherson is owed a lot by a lot of people. I was 'petrified', but went to Florida to testify in a hearing on her case. They had gotten to the millionaire, and that's when I knew they could get to anyone. Anyone.

And more would die.
and more have.

I pray Lisa McPherson has found her peace.
Click to expand...

SP 'Onage 4 hours ago
I was surfing you/tube and came across a Anon video about the death of Lisa McPherson. I was in utter disbelief after viewing it...so, I started investigating further into her death.

I Googled her name and up-pops her full autopsy photos...I was confused, disoriented, literally floored from these shocking photos and what was written in this comment:

Forensic entomologists identified over a hundred cockroach feeding sites on her body, and three nationally prominent forensic pathologists opined that the manner of death was "homicide". Pathologist Werner Spitz, M.D. wrote in his affidavit that "the insect bites appearing in the autopsy photographs of Lisa McPherson, and in particular on her hands and feet, are antemortem and peri-mortem/postmortem."

In other words, bugs were feeding on Lisa before she died, while she was dying and after she had died. Perhaps it is for this reason that they found it necessary to bath a dead Lisa McPherson before they drove her to a hospital 45 minutes away so she could see an emergency room doctor who is a Scientologist, passing four other hospitals.

And in any case, Scientology argues that postmortem cockroach bites are irrelevant, since Lisa could not personally experience the bites and trauma from it.

Imagine this ^^^ response actually came from a so called religon full of pedophiles and perverts.

Her death had a tremendous impact on many people and as much to people who never met her but took the time to get to know her and value her life.

Free to shine said:
From the Comments section at the bottom of the page.
Click to expand...

Nancy Many 6 hours ago
About 6 weeks s after Lisa McPherson died, while under the 'care' of the Sea Org and OSA, and as we now know -- DM, I was brought into OSA, on the 12th floor - to be interrogated. This went on for days and led to the same result as with Lisa. The world may not have known what happened with Lisa, but OSA did. I am certain that because of her, I was not taken somewhere under guard. I often think of how close I cam to meeting her fate, if she had not fallen before me. Lisa McPherson is owed a lot by a lot of people. I was 'petrified', but went to Florida to testify in a hearing on her case. They had gotten to the millionaire, and that's when I knew they could get to anyone. Anyone.

And more would die.
and more have.

I pray Lisa McPherson has found her peace.
Click to expand...

After Nancy wrote her book detailing her own horrific experience at the hands of the cult she began receiving letters from people detailing other stories they were aware of.......some of which I believe remain untold to this day. 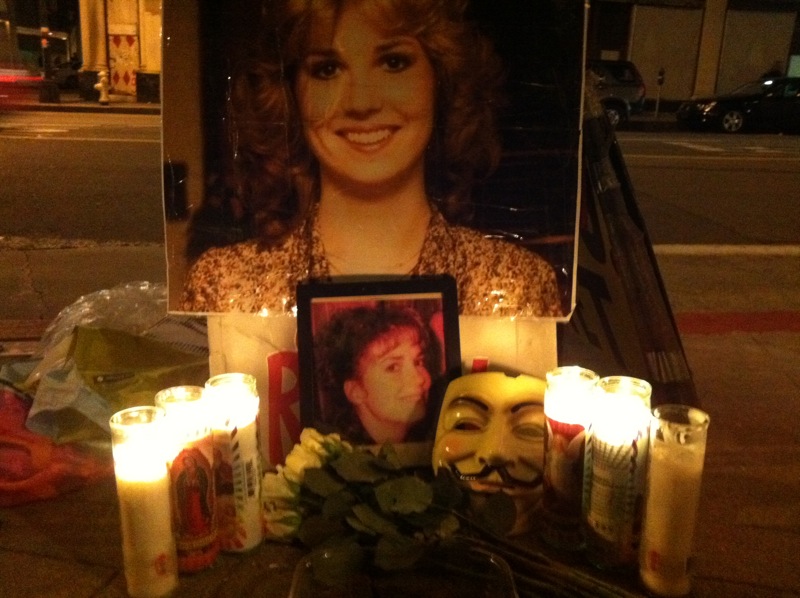 jenni with an eye


Lest we forget.
You must log in or register to reply here.