ThetanExterior said:
After I'd gone back to my local org she sent me a nice letter asking how I was doing. I wrote back to her as a friend would tell another friend what was going on in their life. Then I got a letter from a reg saying she had passed my letter to him and he wanted me to contact him to discuss my next action!

I still remember the feeling of betrayal but now I'm out I can understand why she did it. I hope she woke up eventually and got out but I doubt it.
Click to expand...

I doubt it too ... she fitted right in from day one and seemed blissfully content despite the austerity and all the pointless restrictions.

ThetanExterior said:
After I'd gone back to my local org she sent me a nice letter asking how I was doing. I wrote back to her as a friend would tell another friend what was going on in their life. Then I got a letter from a reg saying she had passed my letter to him and he wanted me to contact him to discuss my next action!

I still remember the feeling of betrayal but now I'm out I can understand why she did it. I hope she woke up eventually and got out but I doubt it.
Click to expand...

It's possible that your response was routed to the reg directly.

LRH policy is for the Dir Comm to open all incoming letters, and decide how to route them, regardless of what person the letter might be addressed to. A letter from a public WOULD go to the reg first (as a "reach"), who would compose a letter to you (inserting some BS as to how your letter got into his hands). THEN your letter might go to the original letter writer.

The UFO cult outpost at Stain Hill is in the news again this week, following a £14,000 fine for (as we all knew...) discharging untreated sewage into a watercourse. The arrogance of the cultists is sickening, but knowing how hard it will have hit them in an organisation where money can only ever flow upwards makes this quite satisfying.

It will be a cold day in hell before they can ever afford TP again. No doubt Helluvahoax can devise a 'cork rundown' for them all.

A lot of building work has taken place at St Hill over the past few years. The whole castle has (apparently) been renovated from top to bottom, extension landscaping and prettifying has taken place in the grounds (including a much-needed new sewage works – See ‘Dirty Cult’ thread), a new, modern canteen, large courseroom extension and coach park have been built and a large building down the road was purchased and renovated in order to provide offices for the management division – CLO UK.

The latter provides an interesting story – particularly if you have a liking for conspiracy theories. Fonthill Lodge private school was located in a building just a few hundred yards from the St Hill main entrance. It wasn’t a large school and clearly had problems financially as part of it closed in 1985 and the rest followed in 2011.

Some info here (appears to be from 2008): http://www.educationbase.co.uk/Fonthill-Lodge-School-East-Grinstead,EE1737

The more observant might notice the name at the bottom Margaret Neal – who was in fact the principal at the time. The same Margaret Neal who was Keeper of the Tech at St hill in the 1960s and mother of the cult’s UK head lawyer – Peter Hodkin. Some people have suggested that she may have deliberately run the school into the ground just so that the cult could acquire a nearby building. I don’t find this likely as I know many private schools struggled to stay afloat after the recession and in any case the cult don’t seem to have any problems raising the money and getting planning permission to build new buildings on their existing site. It was obviously a good deal for them at the time to buy an empty building. But it also shows that even with the vast experience Margaret had in the field of education, all her advanced OT Tech and never-fail Scientology Admin Tech, she couldn’t turn things around. So much for ‘workability’.

So Miscavige can crow about all this ‘straight up and vertical expansion’ and point to all these new buildings. But the fact is, big buildings seem very empty when you don’t have a lot of public. According to sources who have been At St Hill over the last few years, courserooms are mostly empty, and very little auditing is taking place. Hell ST Hill doesn’t even deliver the Briefing Course anymore! Apparently, the majority of staff are foreign (I have nothing against that per se, but it does illustrate the difficulties the cult has in attracting and retaining members from the UK) with the largest part from Hungary.

Hilariously, given the lack of actual public and difficulty in recruiting staff, they are currently constructing a large new training facility down by the stables, partly on a swamp. Hopefully they put in proper drainage first.

I have prepared some aerial maps to illustrate some of the changes (with help from Mr Google).

This one shows the wider area and someone has even marked the site of the CLO office on Google maps: 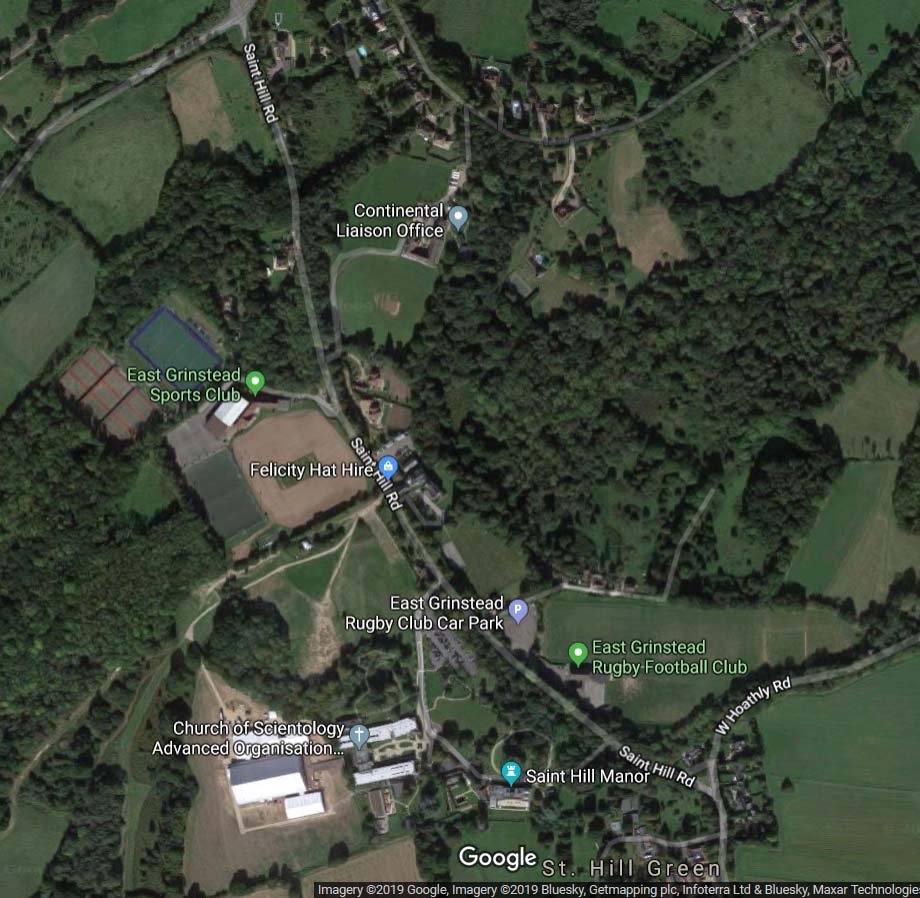 Interestingly, the latest Google images of the area show the IAS tents in the field next to the castle which wa sfortunate as they are only up for for a few months each year. You can get some scale of the size of the thing from this when you look at the full-sized (container-sized) trucks next to it. 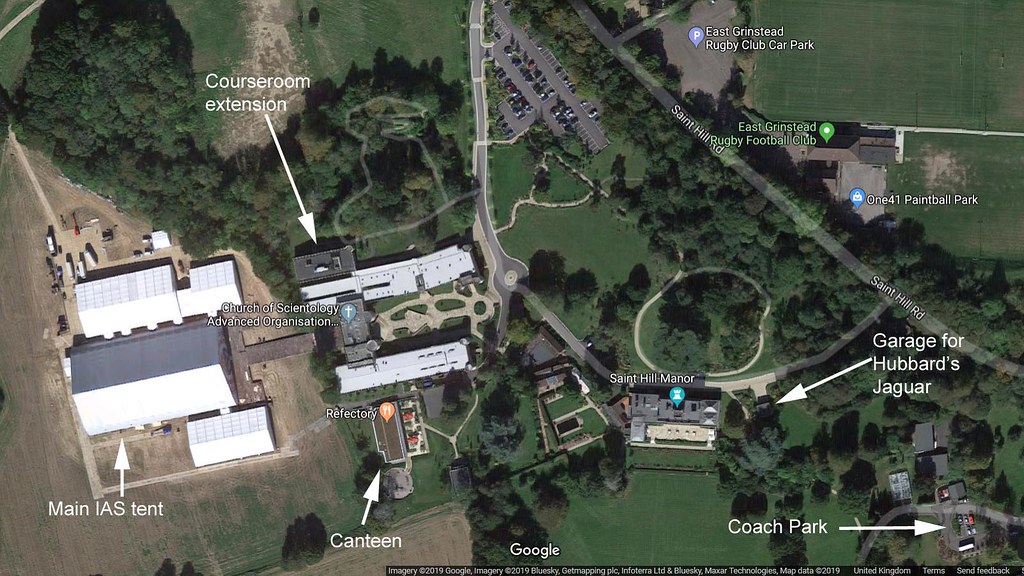 And one showing where the new sewage plant is. A big improvement on what they had before - let's hope it doesn't go wrong again! 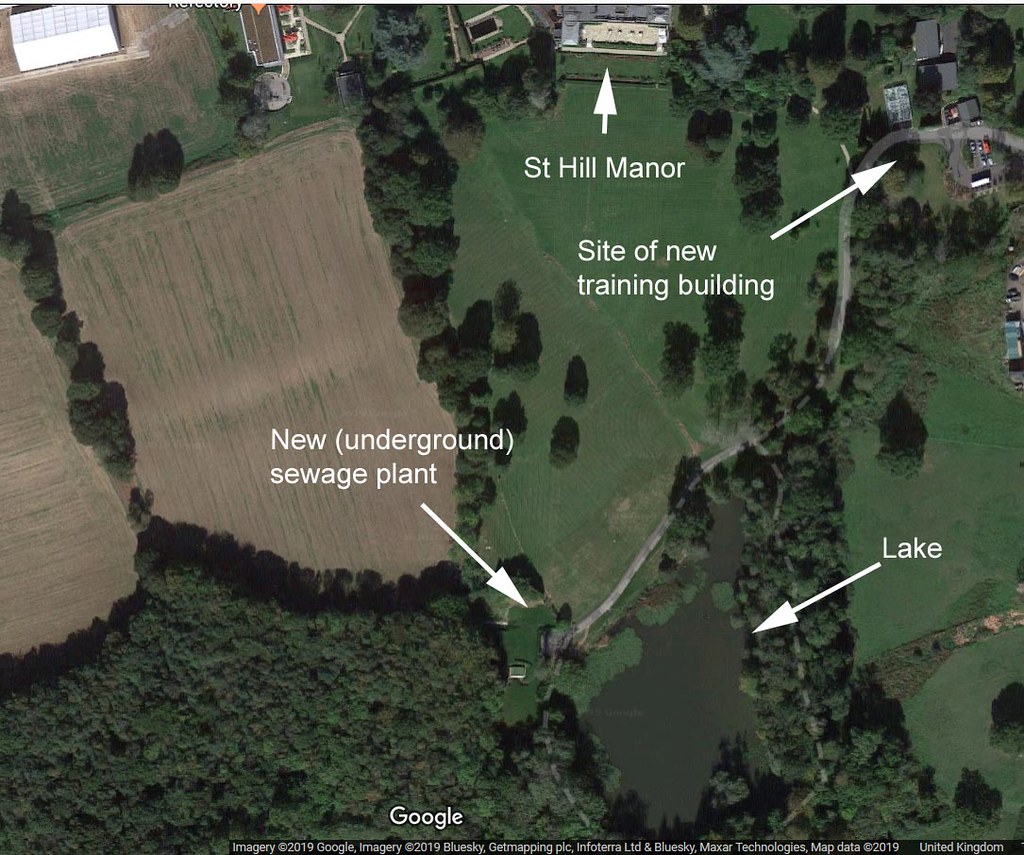 On the face of it St Hill is doing pretty well. But if you look a little closer, you will see that very little of what it is supposedly intended for – delivering higher level services – is actually taking place. As I have mentioned, most of the staff are from abroad and judging from my own observations in East Grinstead town, the staff fall mostly into two age demographics:

1. Older (over 50 and all the way up to 80s) people who might have been in the Sea Org for decades or else be ex-public who fell on hard times, got divorced or perhaps had a mid-life crises and wanted to do something ‘different’.
2. Youngsters (late teens to early 20s) who probably are children of Scientologists and were recruited out of school or else were naïve and inexperienced enough to be plucked off the streets and thought they were going to a better life in another country.

It really is very disturbing to see so many people who are totally clueless about Scientology and yet seem prepared to give everything. I try to console myself with the knowledge that most of the younger ones will pretty soon realise that this is not what they signed up for and if they want a life they had better leave. I have been following a number of children of Scns over the past few years and a lot have left the SO at least, when they realised that if they wanted a proper life (kids, money, their own property, decide their own future etc) they couldn’t get it by being on staff.

So, St Hill is still there, but I have to wonder if anyone working or visiting will look at all the empty building space and think that something might be amiss?
You must log in or register to reply here.

CoS Can’t Wait For Planning Application at St Hill