Administrator
This was a massive thing for Steve to do.

He's a good guy and I for one don't care that he still thinks of himself as a Scientologist. He's out of the Matrix and will find his own way from here.

ESMB is not the place for exes that don't immediately & 100% swing away from Scientology. It used to be. It isn't now. No judgement implied. It's just the way it is.

I created this board for people just like Steve. Right now if I was in Steve's position I wouldn't post here.

I'm not "ripping" Steve, quite the contrary. Many others aren't "ripping" him either.

If, after he's been out of the CofS for a while, he came here and attempted to do a PR "handling," with "ARC" and schmoozing, and Propaganda tech, then that would be a different matter.

Even then, I'd just add some information for the benefit of others; it won't involve any "ripping," although, if he's still a Scientologist, he'll likely regard the simple adding of information as an "attack."

That would be unfortunate, but I doubt Steve will become a Marty-ite on a mission to "handle" ESMB.

People who newly leave the CofS deserve a grace period - a few months at least.


I'm talking about the immediate reception or discussion of people as they first leave.

I've started a thread here rather than derail this thread: http://www.forum.exscn.net/showthre...argo-Declare-Independence&p=726558#post726558

Which is better - to go to Marty's, and hear ever more extreme deification of Hubbard, based on lies, or to come here and hear the truth in all it's sordid and sometimes upsetting detail?

Which is better depends on who you talk to and where they are in their process.

Smilla said:
Which is better - to go to Marty's, and hear ever more extreme deification of Hubbard, based on lies, or to come here and hear the truth in all it's sordid and sometimes upsetting detail?

Which is better depends on who you talk to and where they are in their process.


Could you post this on the other thread?
http://www.forum.exscn.net/showthread.php?28543-People-newly-out-of-scientology-amp-ESMB

Hey! I'm so happy for Steve and Ariel. They're on their way.

Steve has written a very good report and it's well worth the read. Sure, it's from a scientologist's viewpoint, yet it asks and discusses very pertinent questions, most of which have been well discussed here over time. For someone 'in', it's gonna be a true eye opener!

Here it is again: http://spargostory.wordpress.com/

Yes, it is an excellent report. That information will create an impact on still-in scientologists and that is a VERY good thing in my view.

Good on Steve and Ariel Spargo.

I know Steve and he's a dedicated Scientologist so not surprised he found his way to the Indie Camp and that's fine cause we all have to find our way out of this labyrith and it's not an easy journey.

Just love the mention of my ex, Snr CS Wayne Peachey, for his out tek and programming, looks like Wayne is violating his integrity, the auditor's code, and being bullied by RTC. My advise to Peachey is to grow a pair and join Steve in the Indie Camp.
D

When I got out, I still believed in Hubbard for about 6 months. I read ocmb and just lurked for a year. There was some things written, that I couldn't get behind and I would be pissed if someone revealed OT 3 material. But after reading on my own everything I could , I got over all things Hubbard.

If marty's site had been there, I would have hung out on his site. Those on marty's site will start reading all sorts of things on the net. Some will break out sooner then others. They are adults, if they are uncomfortable with posting, I could understand. But they are reading.

Free to shine said:
I'm talking about the immediate reception or discussion of people as they first leave.

I've started a thread here rather than derail this thread: http://www.forum.exscn.net/showthre...argo-Declare-Independence&p=726558#post726558
Click to expand...


your link points to this thread...

PirateAndBum said:
your link points to this thread...
Click to expand...

Lol, no wonder I feel like I'm going round in circles!

PirateAndBum said:
your link points to this thread...
Click to expand...


Oops sorry! Calls for more coffee ... I meant this about Melbourne and Sydney http://www.forum.exscn.net/showthread.php?28541-MELBOURNE-Idle-Org-Stats-2011-2012
I'll ask a mod to edit it.
O

I know it was linked in the OP, but the real meat, and there is a LOT of it, is at the blog:

VERY well worth reading in its entirety.

Re: People newly out of scientology & ESMB

I just received this from Steve Spargo.

I asked his permission to post on ESMB and he said "Sure ~~ go right ahead.

So this is posted with his full permission."


A Change of Heart​
I have had time to settle down a bit and think through the Church issues and have come to a more reasonable and final position. I can give you the key outline here:

In the first case, the Church by way of unnecessary, technical arbitraries denied delivery to Ariel and I at a time when we were still willing to invest the required 50 years and $400,000+ (not counting IAS, Ideal Org, Super Power, CCHR, ABLE and materials).

Now we are outside the Church they will again deny us Scientology with their usual infiltrations and legal attacks to prevent us from starting a Scientology activity. This reveals the Church’s true position on Religious Freedom.

In the second case, I was talking to a woman whose family and children have not spoken to her for many years. The Church disconnected her for speaking out about some justice abuses. This is the Church’s version of Freedom of Speech and Right To Have A Family.

As I looked into her eyes and saw the suppressed tears as she talked about this, I felt so angry at the knowledge that in all the Church of Scientology there wasn’t a single Scientologist that would lift a finger to help this girl. Not even her own children.


Yes, now I know the monster my Church has become. In our selfish desires for immortality we have closed our eyes to the abuses and abandoned all the decent impulses we pretended we were serving.

So I withdraw any and every assurance I gave to people that I would not attack this Church. Part of my life’s work from now on will be shining the light on the human rights travesty that calls itself the Church of Scientology. It must be drastically reformed so all people can benefit from Scientology without interference from some para-military, thought-controlling management.
Click to expand...

I'll see you on the other side of the Bridge, down the track, up the line and over the hill (10).
Click to expand...

GAT II then, is the light at the end of the tunnel!!

Holy shit!! It's a locomotive!! Run for your lives!! :shock:

Get ready for a lot more exes coming aboard!!

R6Basic said:
Each time I come to this board I wonder if there is going to be another defection. I am disappointed very few times.
Click to expand...

OMG! I thought you wrote defecation, not defection! Well, come to think of it, pretty much the same thing!

You say defection, I say defecation.....as the song goes. (actually, I don't think Gershwin wrote the lyrics quite like that)

Re: People newly out of scientology & ESMB


Karen#1 said:
I just received this from Steve Spargo.

I asked his permission to post on ESMB and he said "Sure ~~ go right ahead.

So this is posted with his full permission."
...
Click to expand...


I am glad you are in comm with him.

Please, and with all due respect to him, ask him:

'Who wrote the materials, HCOB/HCOPL 's, on disconnection?'

'Who wrote the materials, HCOB/HCOPL 's, on Fair Game?'

'When were they written?'

Veda said:
These are pretty typical statements, from Steve, for someone just out of the "Church." Time will tell whether he is simply passing through MartyWorld, or if he has taken up residence there.
Click to expand...

The tech of that is fully covered on OT levels, in Ron's HCOB "PARTIAL BLOWS". 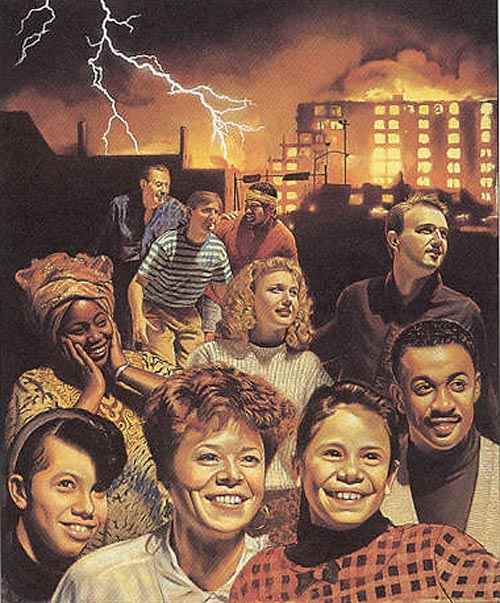 OperatingSP said:
I know it was linked in the OP, but the real meat, and there is a LOT of it, is at the blog:

VERY well worth reading in its entirety.
Click to expand...


Yes, I would say so. I just read page 1 and from what he says there, I see that the tech in Australia is way past being in the toilet, it's whoosh down the sewer pipe and is currently so far out to sea it will never be seen again.

Congratulations and welcome to the real world, Steve and Ariel.
You must log in or register to reply here.

Is The Independent Dianetics Foundation - iDianetics.org - an OSA front?