You encounter someone who dabbled in organized Scientology, bought some auditing, and did (mostly) "grade zero" (communication processes).

You ask him, "Tell me about your grade zero auditing," and when he says he liked it, do you:

1) Acknowledge him, and say, "There's some good stuff at the beginning, but it's not representative of what follows. The nature of auditing changes and becomes, gradually, more hypnotic, and, because it's gradual you're expected not to notice. So beware."

When confronted by a person, who is in the process of being lured into Scientology, and has just pleasantly used his newly acquired "Comm Course" skills to establish communication with, and happily extrovert, a withdrawn little old lady neighbor, and is very pleased with himself about his good deed, and equally as impressed with his success applying the "tech," don't go 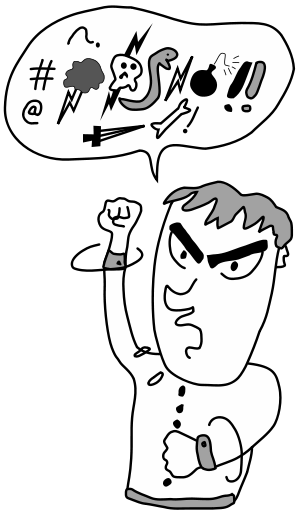 to the person, because that probably won't help free him from the sucking power of Scientology.

The fact is the little old lady did feel better, and was cheerfully extroverted.

Recognize that, and then take it from there.

It's a quote from Marty Rathbun during the brief period when he was no longer covering Hubbard's ass, and was sounding pretty sane. Subsequently, he backslid into whatever odd state he's in now. Anyway....

"...Ron educated his followers on the mechanics intentionally used to control and damage the mind and simultaneously employed by him to do precisely that to his followers. It is diabolical in that the followers having been educated by Ron on the techniques would then never guess they would be used on the followers."


What's so tragic about Marty's current situation is that he knows.

Hubbard would often mention "enemy tactics" and, inevitably, present himself as the opponent of those tactics. This assured Scientologists that Hubbard would never use such tactics on them.

Perhaps the single most glaring example of this is Hubbard's secret use, on his own followers, of the ideas and methods of his 1955 hoax "Russian textbook on Psycho-politics."

The "Russian textbook" had been remarkably described in the mid 1960s in the Australian Anderson Report. 22 years later, an examination of this topic was published in the book, 'Messiah or Madman?' and, 14 years after that, an extensive examination was published in the e-book 'Brainwashing Manual Parallels'. Yet, the door was opened in the mid 1960s by an anonymous contributor to the Anderson Report, which stands out as an example of early and extraordinary insight.

One of the earliest to recognize this pattern by Hubbard was Volney Mathison, who, in 1954, wrote of Hubbard:

"First, he denounces and exposes... Then he uses the very power he has denounced..."

From day one, Hubbard used "enemy tactics" and "aberrative" behavior patterns on unsuspecting Scientologists, yet Scientologists knew that he'd never do such a thing to them, since, after all, he'd described it to them in a lecture, etc., as being something that the bad guys would do, and he was the ultimate good guy.

In his confidential writings, Hubbard taught that Scientology's enemies should be subjected to "enemy tactics," and to the various mechanisms of the mind (and "reactive mind"), and Hubbard, in writings and lectures, would sometimes describe these and, on a few occasions, even warn the Scientologists that some evil force (not him of course, but the communists, Nazis, psychiatrists, the "12 bankers," etc.) could use Scientology to enslave - such is "the power the tech," etc.

Scientologists are fond of quoting these warnings. This, while remaining subject to the manipulative ideas and methods woven into Scientology by its founder.

L. Ron Hubbard described himself as "Mankind's Greatest Friend," etc., so his writings and comments about "aberrative mechanisms" and "enemy tactics" never came across as a warning about himself. If anything, it made others more inclined to trust him.

For example, in Dianetics, what's "aberrative"? Something that equates to "survival." The "held down 7s" are "aberrative" because they're identified with the person's survival. "Survival," as a "mechanism" becomes "aberrative."

Even in 1950, Dianetics was presented as being a "race with the atomic bomb." The message was plain enough: Dianetics = Survival. No Dianetics = Doom.

And this continued into Scientology. One of many examples: In 1956, Hubbard wrote, "With Man now equipped with weapons sufficient to destroy all Mankind and Earth... The primary race on Earth is... the one being run between Scientology and the atomic bomb."

How many Scientologists read Hubbard's descriptions of Dianetics and Scientology as essential for Mankind's "Survival!" - and their own "Survival" - and thought, "Oh, Ron's using the 'Survival mechanism' to manipulate me" ?

Another example from 1950 Dianetics is the "ally computation." Someone comes out of the blue and helps another person, helps the other person in some way or other. The "help" could be indifferently offered, or insincerely offered, but if the needy person regards it as aiding in his "Survival!" (or well being, or the alleviation of pain or the attainment of pleasure or relief), then (so the theory goes) the "ally" mechanism is in place and in effect. For example, an uncle, who may not be a particularly nice fellow, gets his little nephew a glass of water when that nephew is sick in bed and thirsty. The uncle (in the mind of the little nephew) becomes an "ally," and the uncle become identified with "Survival!"

However, it did happen, and not only years later, but sometimes the same day, or previous to Hubbard mentioning a deceptive, manipulative or destructive mechanism or tactic.

But it was disguised, and so wasn't recognized. Hubbard's words about the race between Dianetics or/and Scientology and the atomic bomb were regarded by Scientologists as warnings by their, and Mankind's, greatest "ally," L. Ron Hubbard.

Who amongst Scientologists suspected?

Yet, Hubbard's words about "the race between Scientology and the atomic bomb" - from 1956 - occurred less than a year after Hubbard had published, and distributed, his fake "Russian Psychopolitics textbook" (which of course denounced Dianetics), a "textbook" that - amongst a few references to psychiatrists practicing lurid sex with their (unconscious) patients, "Pain-Drug-Hypnosis," shock treatment, lobotomies, etc. - was a compendium of "enemy ('Russian Communist') ideas and methods" for "asserting and maintaining dominion over thoughts and loyalties" through more practical non-medical means.

"The failure of Psychopolitics might well bring about the atomic bombing of the Motherland. The psychopolitical operative must succeed for his success means world peace... The end thoroughly justifies the means."

Even "Survival!" - used to manipulate - was mentioned in the fake "Russian Textbook":

"It is pointed out in many early Russian writings that this is a survival mechanism. It [the "Survival!" mechanism] has already been well and thoroughly used in the survival of Communism."

Yes, it was in plain sight and hidden at the same time.
You must log in or register to reply here.

How to handle new Scientologists?
2