TheOriginalBigBlue said:
As I was composing the list, the thought crossed my mind that OSA Operative would rank higher than Reg because they at least have no moral equivocation. Their purpose is to destroy people utterly and they proudly say what they do, unlike a Reg who must manipulate people's priorities to coincide with their own through duplicity. Also, OSA Operatives mostly deal with disaffected people who have left whereas Regges got them into Scientology in the first place.
Click to expand...

Anatgonism is higher than Covert Hostility ... .

1987 Committee of Evidence on Maureen Hart. As far as I remember, this document was included in the courtfile of her lawsuit against the CoS: 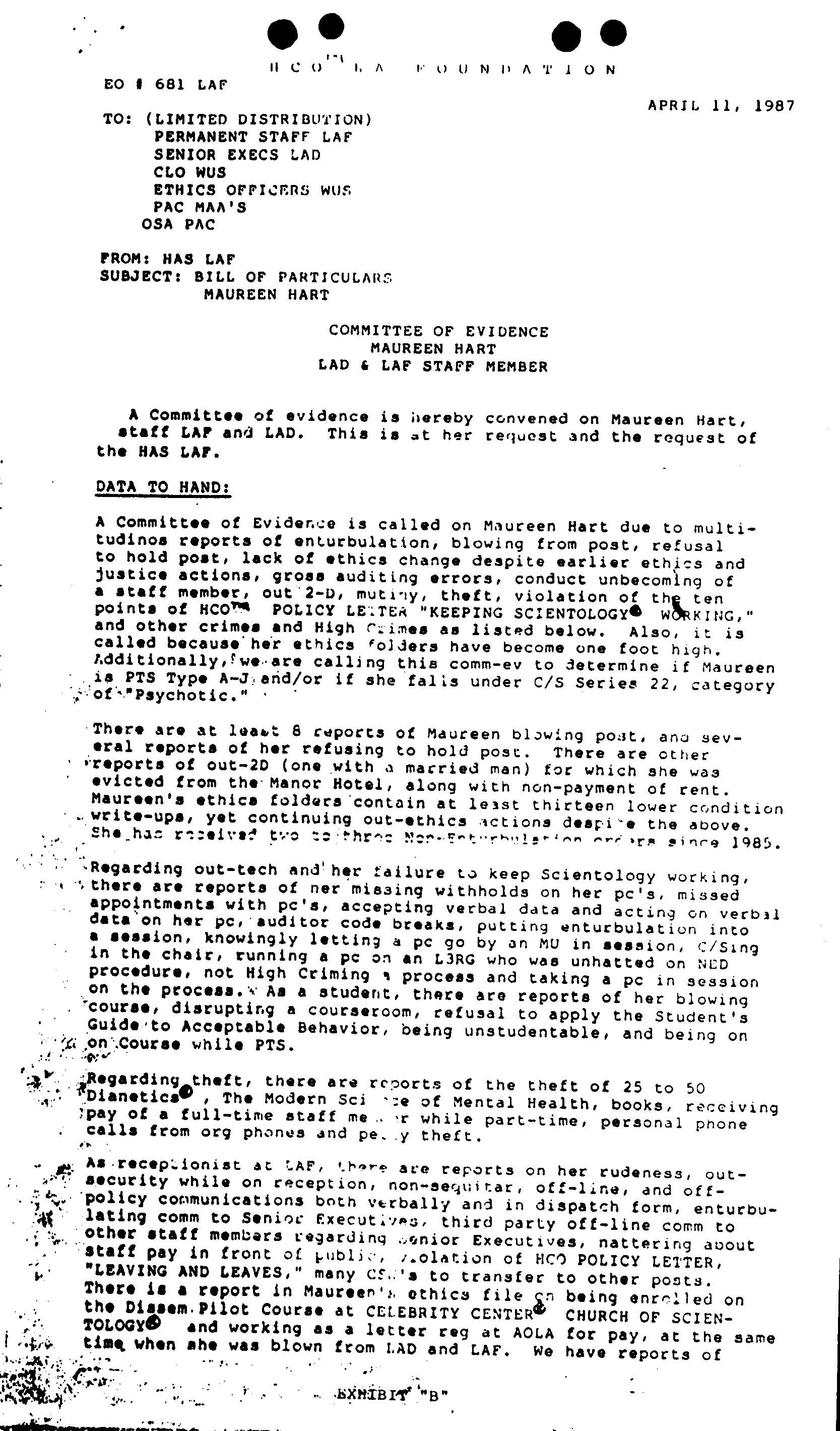 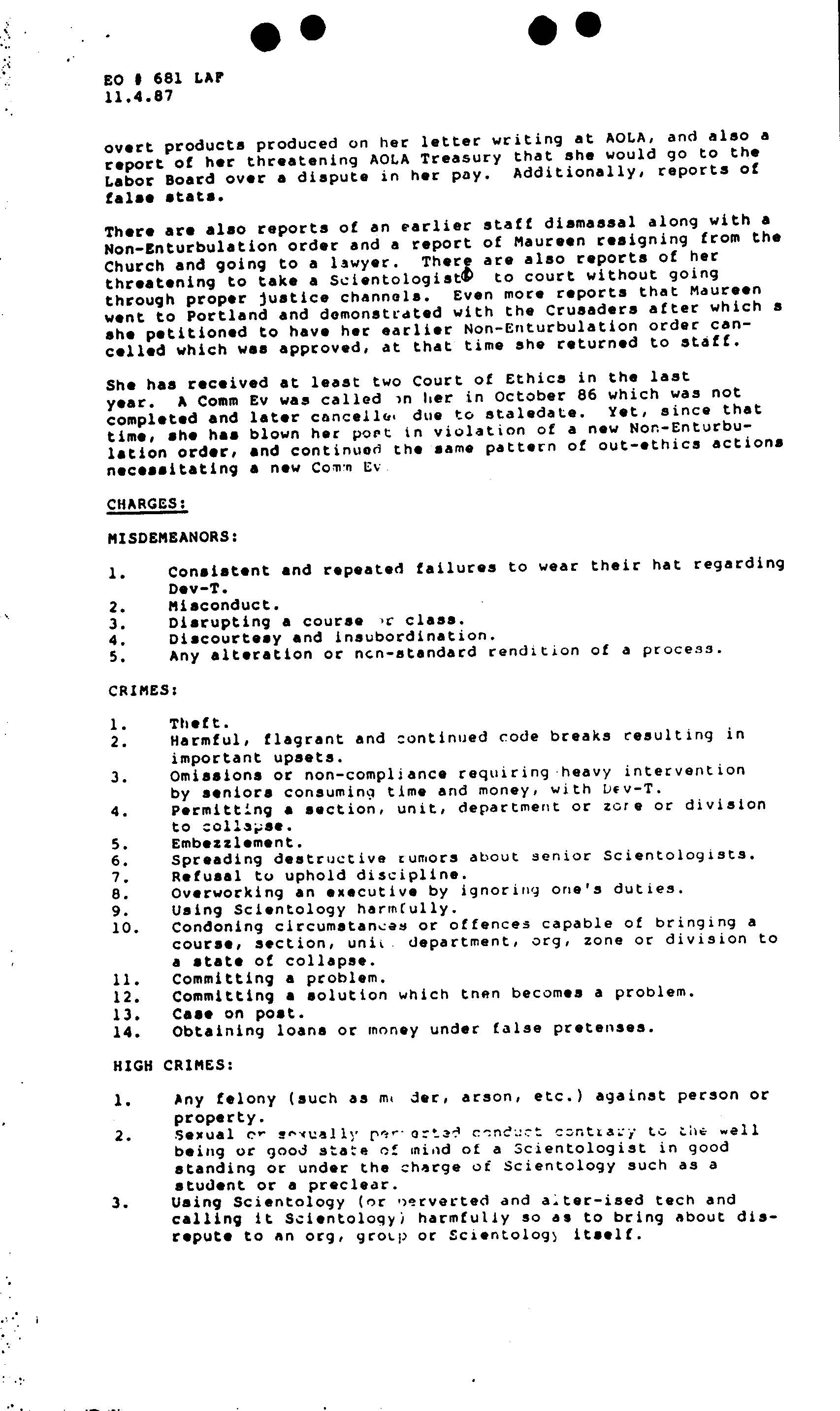 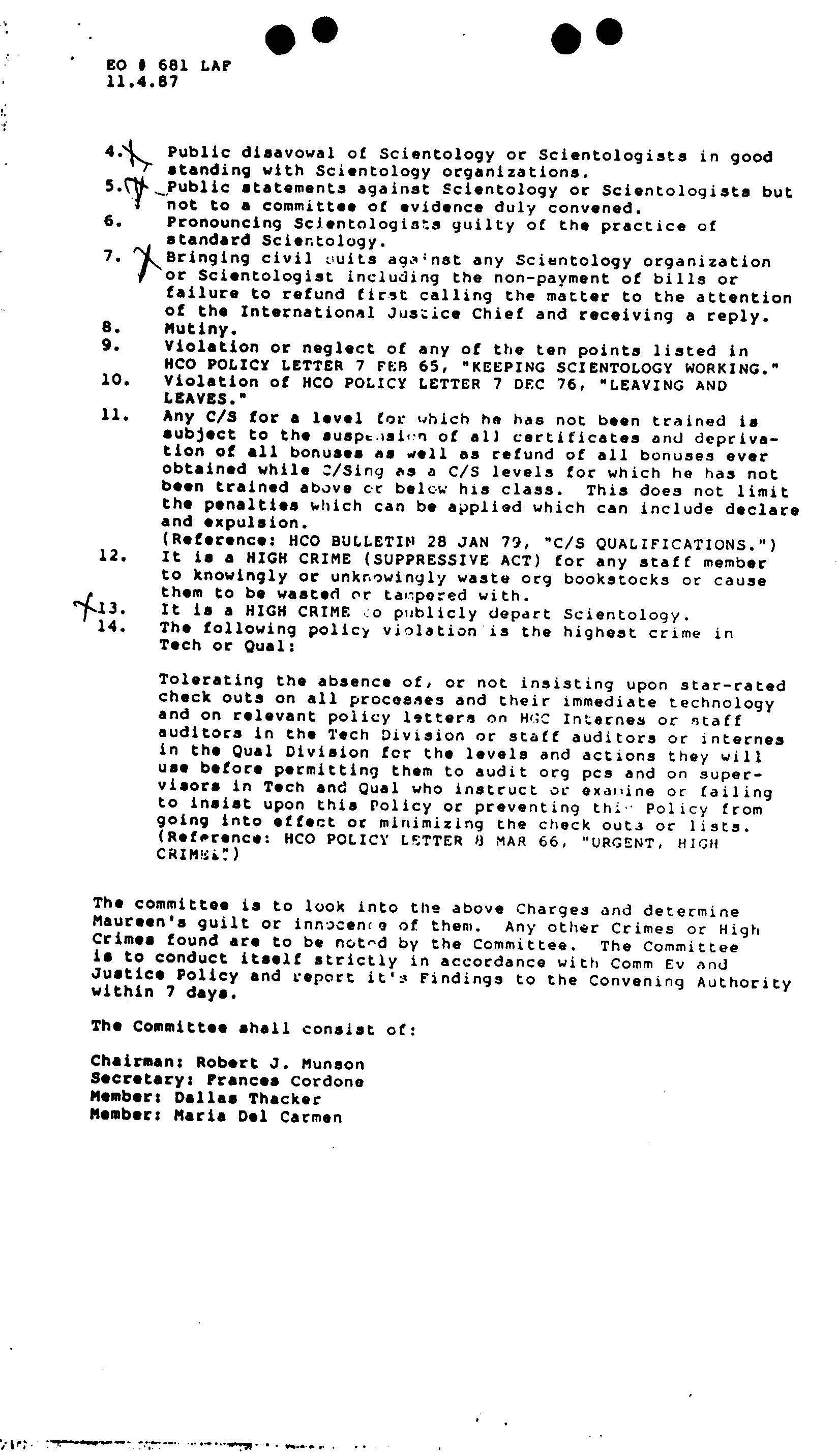 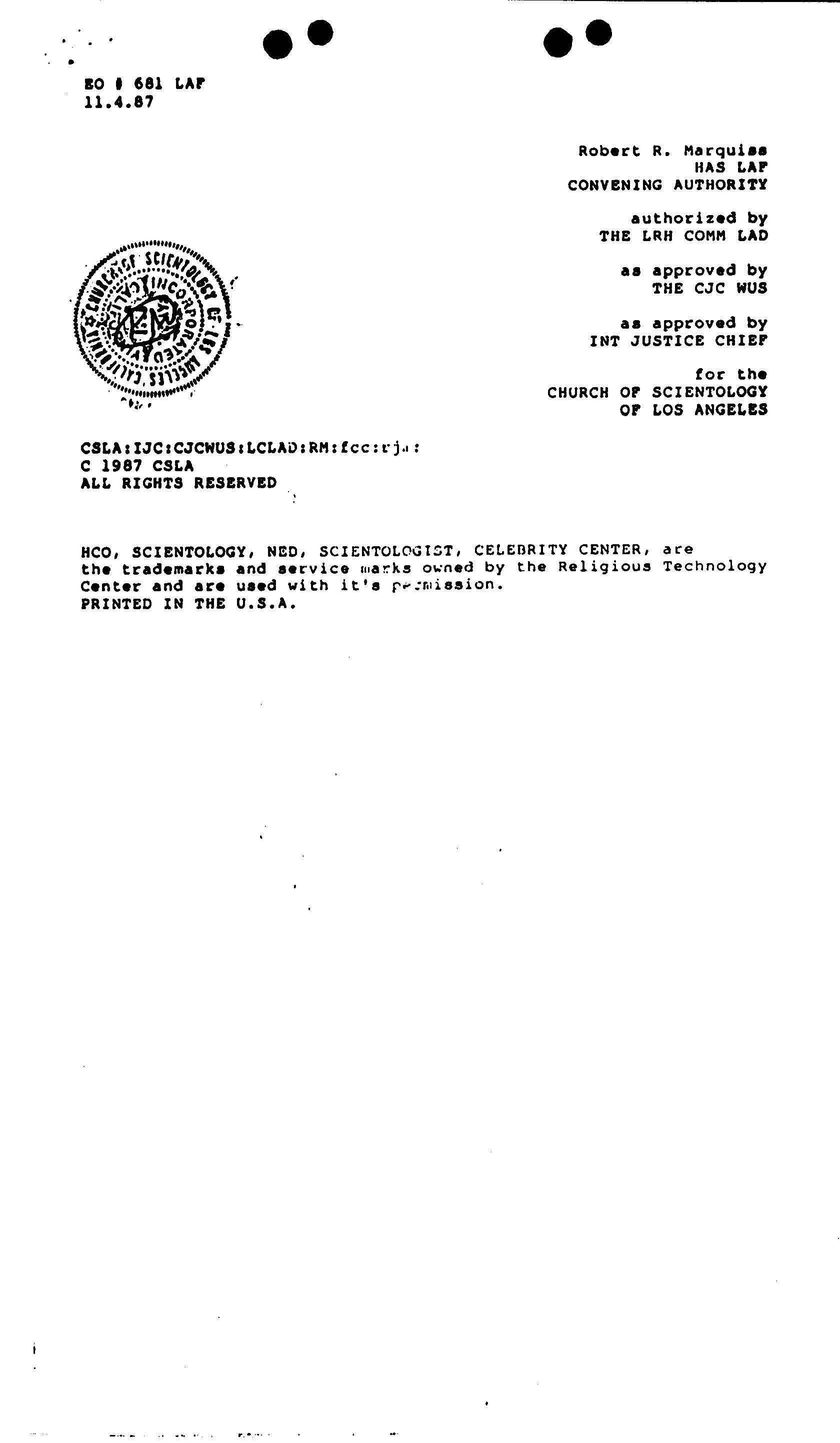 Martin-O said:
1987 Committee of Evidence on Maureen Hart. As far as I remember, this document was included in the courtfile of her lawsuit against the CoS: 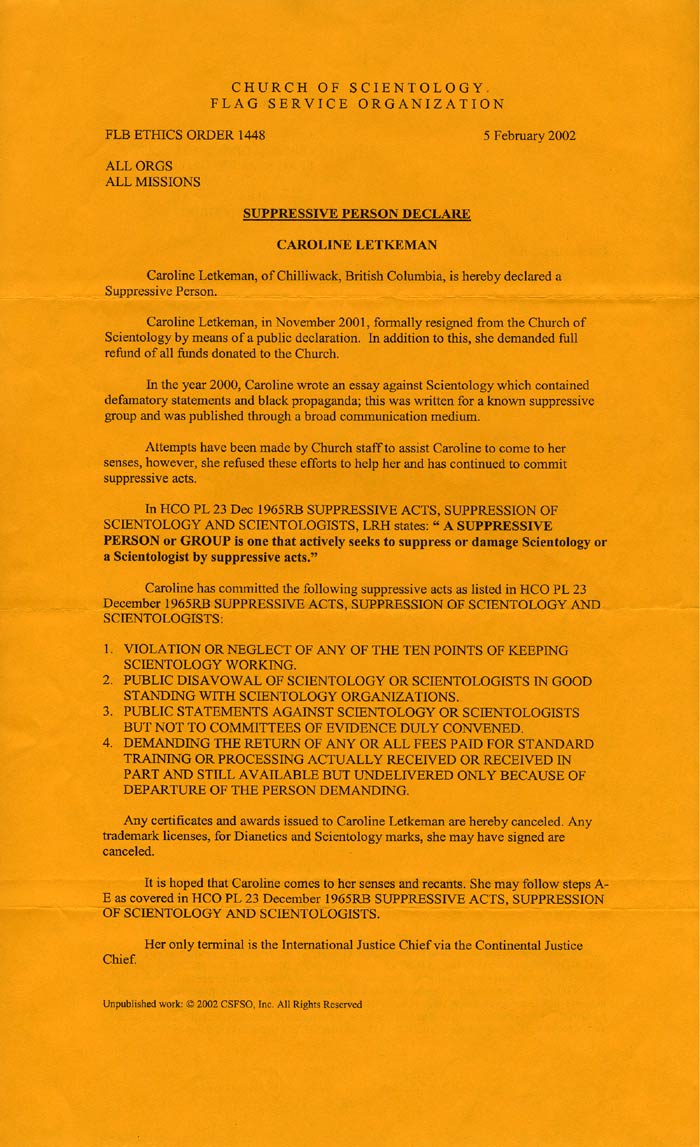 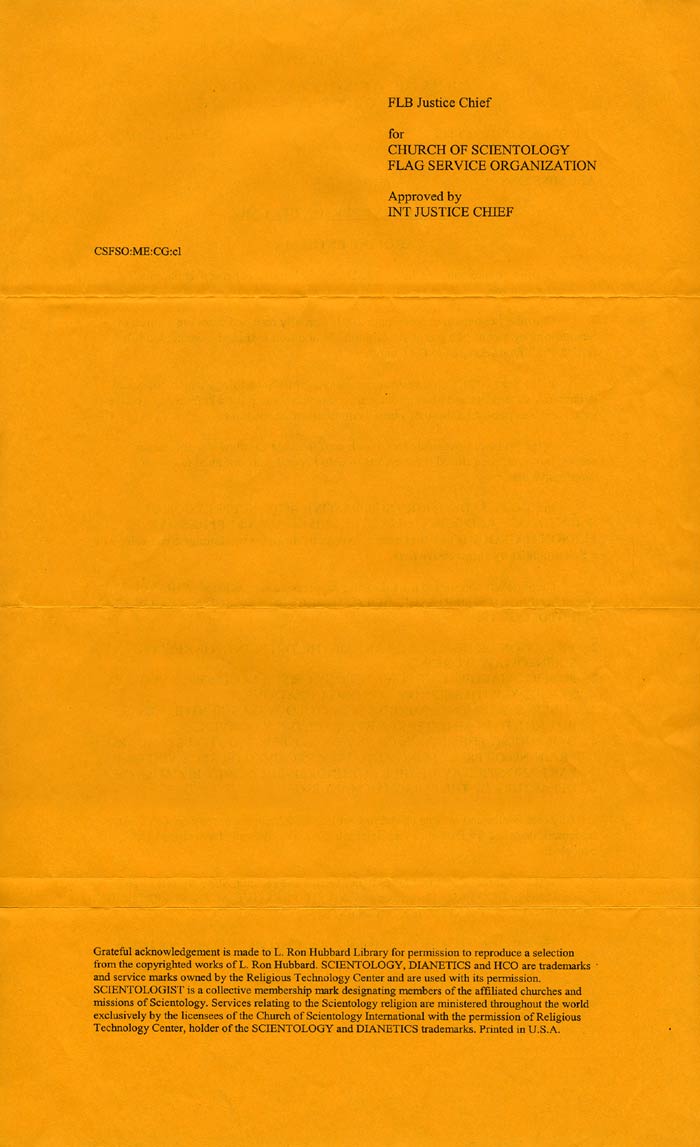 ALL ORGS
ALL MISSIONS
5 February 2002

Caroline Letkeman, in November 2001, formally resigned from the Church of
Scientology by means of a public declaration. In addition to this, she demanded full
refund of all funds donated to the Church.

In the year 2000, Caroline wrote an essay against Scientology which contained
defamatory statements and black propaganda; this was written for a known suppressive
group and was published through a broad communication medium.

Attempts have been made by Church staff to assist Caroline to come to her
senses, however, she refused these efforts to help her and has continued to commit
suppressive acts.

In HCO PL 23 Dec 1965RB SUPPRESSIVE ACTS, SUPPRESSION OF
SCIENTOLOGY AND SCIENTOLOGISTS, LRH states: "A SUPPRESSIVE
PERSON or GROUP is one that actively seeks to suppress or damage Scientology or
a Scientologist by suppressive acts."

1. VIOLATION OR NEGLECT OF ANY OF THE TEN POINTS OF KEEPING
SCIENTOLOGY WORKING.

3. PUBLIC STATEMENTS AGAINST SCIENTOLOGY OR SCIENTOLOGISTS
BUT NOT TO COMMITTEES OF EVIDENCE DULY CONVENED.

4. DEMANDING THE RETURN OF ANY OR ALL FEES PAID FOR STANDARD
TRAINING OR PROCESSING ACTUALLY RECEIVED OR RECEIVED IN
PART AND STILL AVAILABLE BUT UNDELIVERED ONLY BECAUSE OF
DEPARTURE OF THE PERSON DEMANDING.

Any certificates and awards issued to Caroline Letkeman are hereby canceled. Any
trademark licenses, for Dianetics and Scientology marks, shemay have signed are
canceled.

It is hoped that Caroline comes to her senses and recants. She may follow steps A-
E as covered in HCO PL 23 December 1965RB SUPPRESSIVE ACTS, SUPPRESSION
OF SCIENTOLOGY AND SCIENTOLOGISTS.

Her only terminal is the International Justice Chief via the Continental Justice
Chief.

Grateful acknowledgement is made to L. Ron Hubbard Library for permission to reproduce a selection
from the copyrighted works of L. Ron Hubbard. SCIENTOLOGY, DIANETICS and HCO are trademarks
and service marks owned by the Religious Technology Center and are used with its permission.
SCIENTOLOGIST is a collective membership mark designating members of the affiliated churches and
missions of Scientology. Services relating to the Scientology religion are ministered throughout the world
exclusively by the licensees of the Church of Scientology International with the permission of Religious
Technology Center, holder of the SCIENTOLOGY and DIANETICS trademarks. Printed in U.S.A.
Click to expand...

Some comments I made about this EO: http://www.gerryarmstrong.org/50grand/writings/ars/ars-letkeman-2002-03-14.html

It's nice to see they caught their own lie. First it said "donations" (ha ha) and then in caps, they said it was "fees".

And here is the subsequent SP-Declare on Maureen Hart. Unfortunately the copy was of poor quality. But it is always nice to have a look at both the Comm Ev and the SP-Declare. 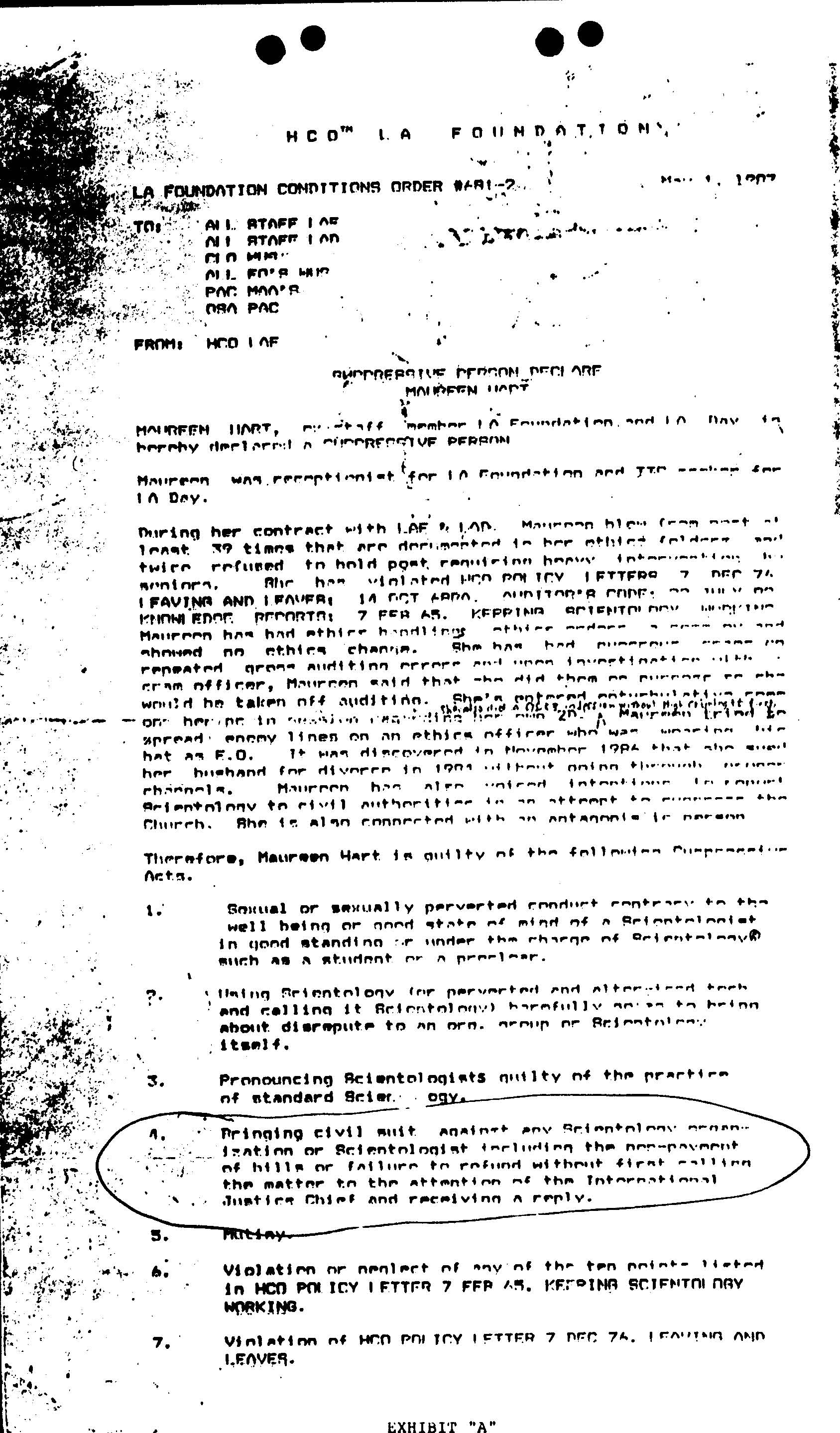 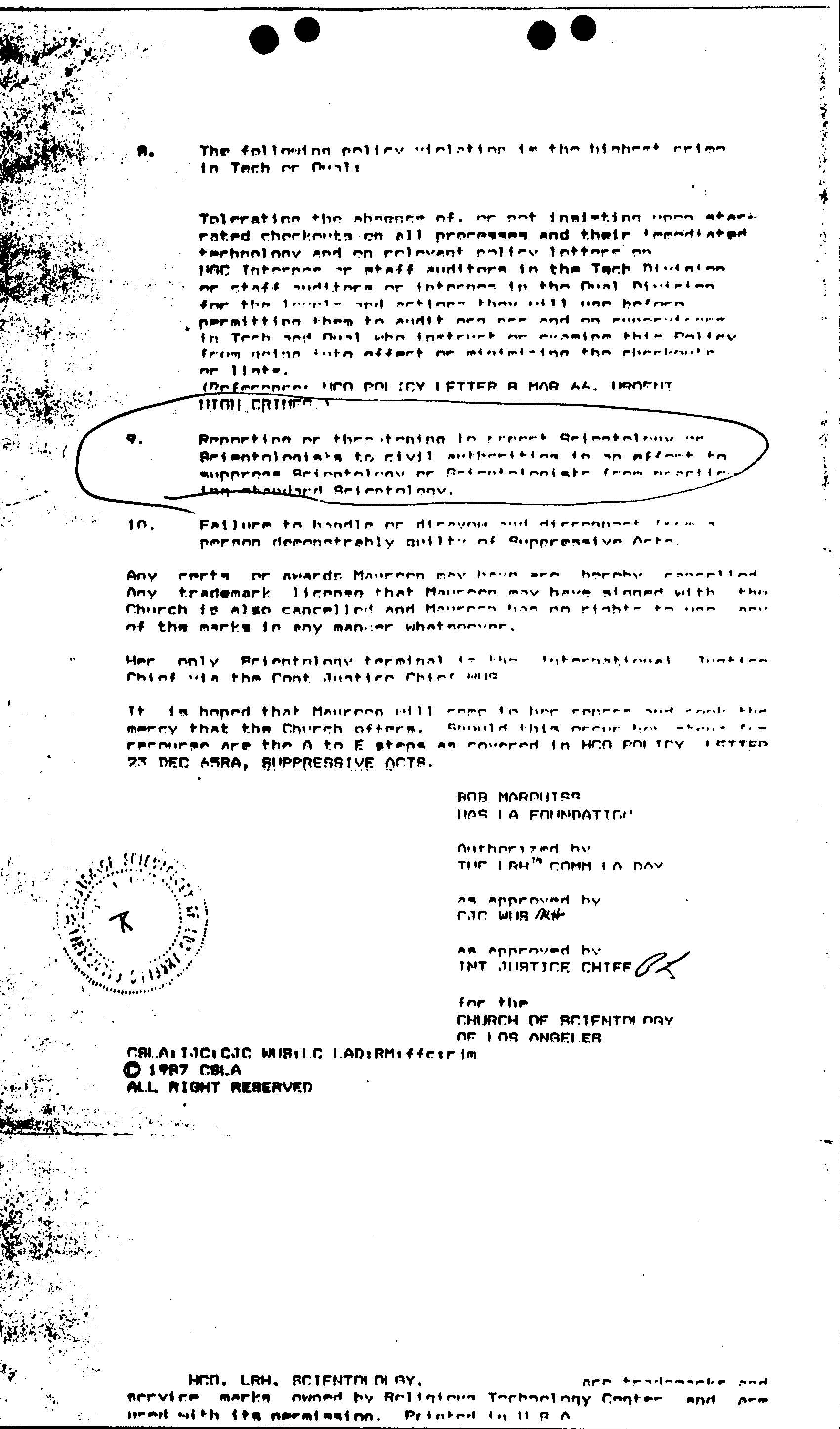 Here's an ethics order in which Hubbard ordered Fair Game, Reverse Processing and R2-45 on people he declared "SP."

are hereby declared Suppressive Persons for pretending to have and distribute forged and altered “Upper Level Materials” which were of a Research nature and not for distribution. All Certificates and Awards are cancelled.

1. Having stolen or illegally procured these dangerous materials (at the instigation of a Psychiatrist) these persons did plot to misuse them to cause Insanity and Death.

2. False report for money that they would furnish the real materials.

3. They are declared Enemies of mankind, the planet and all life.

5. No amnesty may ever cover them.

6. If they ever come to a Qual Division they are to be run on reverse processes.

7. Any Sea Org member contacting any of them is to use Auditing Process R2-45[*].

8. The Criminals Prosecution Bureau is to find any and all crimes in their pasts and have them brought to court and prison.

The Public Distribution of False or Forbidden or Dangerous data is a Suppressive Act and a High Crime.

Hubbard said:
[*] R2-45: An enormously effective process for exteriorization but its use is frowned upon by this society at this time.

There has been some discussion about what Hubbard meant with "R2-45." Comments he made in his lectures, however, make it clear that he meant death.


Hubbard said:
You got a pc who isn't ARC breaky and you now feel happy about the thing and you can go on auditing and find out what is wrong. This is to get him back into the realm of the living. So you see, that's a valuable thing to know.

If that fails you, well, you've always got suicide. You could propose that to the pc. That would solve his problems. “R2-45” by its various – various other techniques. So don't think that you just have this one technique to fall back on.

Hubbard said:
You turned on a theta bop at will, so you the auditor must be having an effect on the meter with your questions. This reality should be coming fairly clear and clean now. You turned on the theta bop, see? You asked the question; you turned it on.

And by the way, you can turn it on on any preclear; you can do this on any preclear if he isn’t dead. And if he’s dead, you get a Clear reaction. You get a free needle. That’s right. It’s uninterfered with, with bank.

A female body evidently registers 5,000 ohms, a male body 12,500 on dead bodies as far as I can find at this time, providing they aren’t too dead. You have to catch them just after the thetan leaves and before the GE collapses, so there’s a period there of a few seconds when you would get a Clear reaction on a dead body.

All right. Death is not the same as clearing but there is, remember, R2-45. It’s a very valid technique. A lot of people have used it before now.

There has been some discussion about what Hubbard meant with "R2-45." Comments he made in his lectures, however, make it clear that he meant death.
Click to expand...

3. They are declared Enemies of mankind, the planet and all life.

George Layton said:
3. They are declared Enemies of mankind, the planet and all life.

At some point the 'assuming responsibility thing' verges over into delusion and megalomania.

George Layton said:
3. They are declared Enemies of mankind, the planet and all life.

In 1968, Hubbard wrote and published HCO Ethics Order 30 Int, smearing twelve people as "Enemies of mankind, the planet and all life."

In 1984, Miscavige, Rathbun and Rinder published an equally venomous document for him, OSA Int ED 19, "Squirrels" smearing another six people. The language they used to black PR the six, all of whom had been high level Sea Org staff close to Hubbard, is insane. Hubbard, Miscavige, Rathbun and Rinder had this vicious smear sent to all Scientologists and posted on all Scientology public notice boards. Neither Rathbun nor Rinder has said one word to correct this evil. Their black propaganda lives on.

Emphasis mine in the text below.


The following people have demonstrated that they cannot be trusted with the religion of Scientology or Scientologists. Their actions are destructive and aimed at the enslavement rather than the freedom of man.

The above named squirrels have attempted to taint government with their false reports.

They have deliberately held policy up to scorn and altered such policies to suit their own destructive end.

Some of these squirrels have offered false testimony to the IRS in order to protect their overts against mankind and their only road out of this universe.

Several of them have misrepresented Scientology practices to the FBI or Justice Department in a futile attempt to taint the minds of the government and the courts against the Church of Scientology.

They have supported psychiatric aims and principles over Scientology principles in their misrepresentations to Department of Justice representatives as well as Boston lawyer Michael Flynn.

They have turned from ethical and moral Scientology principles by demanding no ethics be applied to them or by them.

Several of them have spoken out against Scientologists in good standing to the IRS in a hope that they might escape from their own destructive acts and shift attention from themselves and their crimes.

They have altered and assisted in the alteration of Tech in an attempt to seal off the bridge to those who have fallen prey to their destructive intentions.

Their continual harmful acts to themselves and their continued desire to drag others to the level of beasts and animals devoid of spiritual qualities places them in the psychiatric camp of those who manufacture madness for profit.

Therefore, be it known that these acts of spiritual destruction and cries for no ethics, no morals, and no policy, have separated them from the body of the ethical and practicing Scientologists of this planet.


-2-​
Dedicated Scientologists need not support them until they have fully recanted and fully fulfilled all of the requirements of the Ethics and Justice PLs dealing with suppressives and suppressive acts.

This ED is written that those who are not informed as to the acts of those named above may now be so informed.

It is written so that those who are not Scientologists may be warned that these individuals do not represent the Church or the religion of Scientology in any capacity.

Their only terminal is the International Justice Chief.

for the CHURCH OF SCIENTOLOGY INTERNATIONAL

In 2003, Gerry wrote a note about OSA Int ED 19, webbed here. Since that time, we learned of Rathbun and Rinder's executive involvement. Gerry learned that Rinder was an operative for Miscavige, et al. when the Scientologists used the Griffith Park videos during the Christofferson v. Scientology trial in Portland, Oregon in 1984.

Posted by Caroline and snipped.


Miscavige, Rathbun and Rinder certainly duplicated him.
Click to expand...

Yes, they certainly did and it was totally insane ... but now, both Marty Rathbun and Mike Rinder are exes and have spoken out against the cofs ... I have no doubt they sincerely regret anything done along those lines in hubbards name (in this case over 30 years ago) and if so that's a move in the right direction.

Neither Rathbun nor Rinder has said one word to correct this evil. Their black propaganda lives on.
Click to expand...

No it doesn't, it only lives on for those who were personally involved if they chose/choose to accept and agree with it ... we all know it was just part of the endless stream of childish, cultic, spite filled trash which is what most of scientology was and is.
You must log in or register to reply here.

What is Fair Game?

Mike: Letter Declares ("Scientology Disconnection — Where Are The Declare Orders?")