The Master Game - the highest game 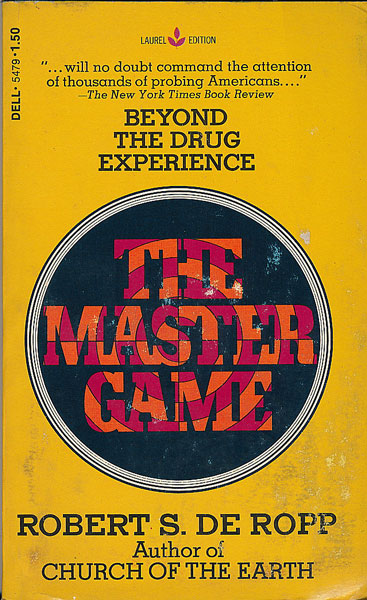 Maybe you could give us your take on what you think of the book, why we should be interested?

WildKat said:
Maybe you could give us your take on what you think of the book, why we should be interested?
Click to expand...

Well, I had read many "consciousness related" books, before Scientology, but De Ropp's book The Master Game delineated what he regarded as the highest and most important "game."

Is "mastery" of "consciousness" a pipe dream?

This is an old re-post. Make of it what you will.

Looking over an old notebook, from the early 1970s, with a bunch of old poems in it, some are pretty embarrassing.

This was one of the simpler ones:

RAISE the hopeless man
that he may beg.

RAISE the beggar
that he may steal

RAISE the thief
that he may fight in daylight

RAISE the worker
that he may create

RAISE the artist
that he may free

RAISE the master
by ourselves being masters​


This was actually my vision for Scientology at the time. What a time of innocence. I had read many of Hubbard's books, but had not yet made it to the "Scientology Academy."

As a naive new Scientologist, I had the idea of eventually becoming a "master," on the same level that I, naively, assumed L. Ron Hubbard was. Other novices (and naïve fringe public) also had this idea, not realizing it was taboo in Scientology. There was only one Source permitted.

It was one of those ideas that would guarantee my eventual incompatibility with Scientology.


Of course, at the time, there was much to be inspired about.

The two linked threads in the first post give the general theme of this thread.
Last edited: Sep 6, 2017

Thanks. I get it now and would like to read the book. The last video was a good explanation.
You must log in or register to reply here.

BE INVISIBLE AND FLY AROUND?
2