The psychic side of sports

After the event, I ran into my old Scientology Academy Supervisor, said hello and, having a newly purchased book in my hand, showed him the cover of the book. He cringed in fright. At the time, I had been slowly backing away from Scientology, and building my library which included "other practices" books. He was still very much IN Scientology, and had entered the 'no interference zone" between Clear and OT 3.

It must have been the book cover than freaked him out.

Probably made him think of "implants," and the title seemed to indicate this was a book about "other practices." I guess it was, in a harmless sort of way.

So that ended our brief conversation, and he wandered off trying not be be keyed-in, no doubt to avoid having to buy any more intensives of auditing to "repair" his having made contact with a "squirrel."


As far as know, the text of the book is not available on the Net, but it comes highly recommended.

Its Table of Contents lists:


1) The Spiritual Underground of Sports 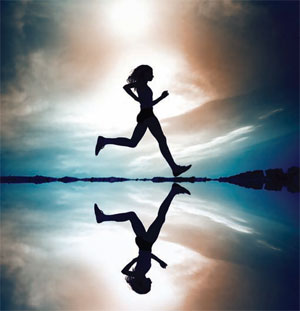 Gerry says that he read Michael Murphy’s Jacob Atabet in 1987, after the “settlement” when he was taking up running. He says the book inspired him, and running has always had a mystical tint to it, even in big races, when his big ego is on the line.
https://www.esalen.org/ctr/michael-murphy

<quote>
Runners have credited them for their feel-good effects for decades, but it wasn’t until 2008 that German researchers used brain scans on runners and were able to identify exactly where they originated. The scientists found that during two-hour-long runs, subjects’ prefrontal and limbic regions (which light up in response to emotions like love) spewed out endorphins. The greater the endorphin surge in these brain areas, the more euphoric the runners reported feeling.
</quote>

I read Murphy's Future of the Body in 2005. Well researched and written, slightly above my reading level so a struggle to take it all in. But it's the same stuff -- he compares similar phenomena across world-class athletes, renowned mystics/religious figures, et al.

Paul
You must log in or register to reply here.

The Psychic Side of Sports : book