The Wizard of Cause!

Well, with all the meltdown and bleed out from the "Church" of late I was going to post something like "L. Ron - Where Art Thou?" and make it a plea because we really, really need Ron now more than evahhhhhhhhhhh!

If there was ever a time for Ron to demonstrate his OT powahz it would be NOW, NOW, NOW and definitely "buy" Thursday before two! He could do it without having to go through all that messy and MESTy being born crap because he's Cause Over Time! Like a good [STRIKE]Retard[/STRIKE] Wizard would be.

First of all, they're both big and glamorous Hollywood productions surrounding a fictional, fantasy, make believe story.

They both have heartless, brainless cowards running around looking for a place to fit in that they can call home.

That is...after they get sucked up in a terrible whirlwind...that happens to both scenarios.

They both have impotent Wizards that turn out to be helpless old men behind a curtain of smoke and mirrors and are nothing but two-bit con artists. These impotent Wizards task our heartless, homeless, brainless cowards with impossible tasks to sell them something that they already possess.

One follows a convoluted, winding road beset with pitfalls and the other is a rickety old bridge to who knows where.

Did I mention the munchkins?

...although Miscavige is more of a tough guy like these characters...mwah, schee?

In the end it's all just a bad dream...except in the movie you have a home to go to...you see, in the movie you lose that in the beginning to find you actually get it back...in the real life fantasy you start out with it and lose it at the end...

The representatives of the lollipop guild remind me of Miscavige, Ratburn, and Rinder.

And the flying monkeys?

Monkeys will be flying out of my ass before I fall for a scam like this again.

...oh with the thoughts that you'd be thinkin', you could be another Lincoln if you only had a brain...

OSA as the Flying monkeys. How very appropriate
G

The Anabaptist Jacques said:
The representatives of the lollipop guild remind me of Miscavige, Ratburn, and Rinder.

Yeah, I even parodied that one sometime back.

You know what's even a good analogy is the idea of Miscavige and the "Church" losing power and all that and melting away to nothing from something as harmless as Anonymous and J & D...kind of like the big bad wicked witch melting away from...of all things...water! 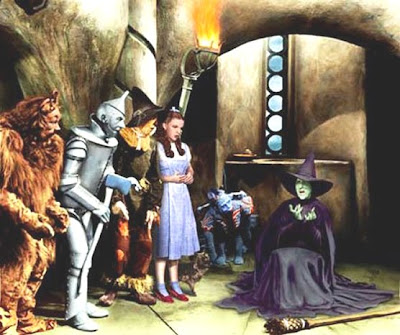 Maybe soon there'll be a bunch of "freed" Ronbots singing the chorus of "Ding Dong the Wicked Dwarf is Dead!" or something...
G

We have to decide who would be the wicked witch of the west.


Well...Ron is the Wizard...I guess Davey would have to be the Witch...but is he a good witch or a bad witch?

That leaves Tom as the munchkin...Marty might be Toto...

...too many decisions for my SP figure-figure dub-in black V case to handle...

The Lizzard of Odd

Why it is "Miss Davey" my pretty! "I'll get you - you and your little ESS PEE! Ahhh HA HA HA HA HA

I love this one!! I can't believe I used to believe that Scientology was an "applied science". There is no science and NO ONE in the rest of the world acknowledges it as a science - the only ones that do are those that pay lots and lots of CASH for it! OMG. What was I thinking? SCIENCE? WHERE IS THE PROOF????CLEARS?? OATEE'S REALLY????
G

DB's and espees and psychs, OH MY!

Why I'll make soup out of those three cowardly ....

I think it was Cowardly Lion who started the myth

It wasn't ME, I swear! It was Tin Man who launched the deception.

It's Not Easy Being Scientology

L. Ron, la OT des OTs, Being Exterior And All That!