Sands Hall says she had no agenda when she decided to write a memoir about the decade she spent entwined with the Church of Scientology.
The Franklin & Marshall College professor says she had no desire to bash the controversial organization, which has faced a barrage of criticism from former members in recent years.
Rather, Hall hoped her book, “Flunk. Start.: Reclaiming My Decade Lost in Scientology,” would help readers understand why someone like her would become a scientologist.
more at link
https://lancasteronline.com/feature...cle_6e5cf638-39d8-11e8-8bcb-2bbbd4b9d9cf.html

An excellent book review of "Flunk. Start. Reclaiming My Decade Lost in Scientology."

The Nation - The Power of the Word: Scientology’s unique manipulations of language seduced the novelist Sands Hall and kept her bound to the church.

One thing that makes Scientology uniquely American is its amalgamation of corporate and authoritarian modes of social control. “[P]art of what made me get out had been observing that increasingly corporate mindset,” recounts the novelist Sands Hall in her intriguing new memoir, Flunk. Start. Reclaiming My Decade Lost in Scientology. “This is ironic, of course, considering the authoritarian mentality of the Church under Hubbard, but most of those years I managed to stay unaware.” How this combination attracts untold thousands of members—to what is, by most accounts, a cult—has received much attention in the decades since Scientology’s founding in the early 1950s. 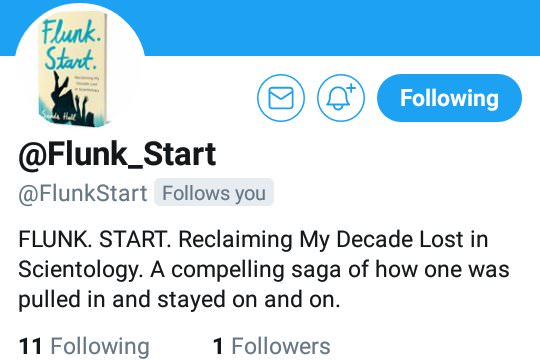 My guest in this episode is author, theatre director, actor and musician Sands Hall. She has recently released her book Flunk. Start. In this book Sands Hall chronicles her slow yet willing absorption into the Church of Scientology. Check her work out at www.sandshall.com

'How I Fell in Love With Scientology," an excerpt from "FLUNK. START. Reclaiming My Decade Lost in Scientology" by Sands Hall.

I spent ten years of my life pretending that decade in Scientology hadn’t happened (seven years in the Church, and three more before I was certain I wouldn’t be persuaded to return). It took another decade to confront and start to write about it. All these years later, I still recall those days — those years — I spent afflicted by doubt. I often wondered if others felt that way. I often thought of Hans Christian Andersen’s “The Emperor’s New Clothes.” Who would be the little boy who pointed, who would finally say what needed to be said?

When would that person be me?

NEW book: Blown: A Novel Set in the World of the Scientology Sea Org

NEW book about Scientology: The Thunderstorms of Eden, by Sandra Kay

New book about Scientology: Shrapnel in the San Fernando Valley, by Carol Es