SpecialFrog said:
The swaztika long predates the Nazis and has no inherent Nazi meaning (and I believe the Nazis reversed the traditional one anyway). You see it all the time on Buddhist temples.
Click to expand...


I thought it was Hindu, but there is a fair amount of overlap. I think it means health.

The Navajo whirling log symbol is also kinda a mirror image of the Nazi swastika (they look like a backwards S, while the swastika looks like a forward S - good luck figuring that out on a woven basket or blanket). There are layers of meaning, all related to peace and harmony - the four sacred mountains of the Navajo nation, the four seasons, and some stuff related to a version of the creation story where the hero of said story navigates a canoe through some whirlpools. This is a pretty decent description of it:

NoName said:
I thought it was Hindu, but there is a fair amount of overlap. I think it means health.

The Navajo whirling log symbol is also kinda a mirror image of the Nazi swastika (they look like a backwards S, while the swastika looks like a forward S - good luck figuring that out on a woven basket or blanket). There are layers of meaning, all related to peace and harmony - the four sacred mountains of the Navajo nation, the four seasons, and some stuff related to a version of the creation story where the hero of said story navigates a canoe through some whirlpools. This is a pretty decent description of it:

I was appalled the first time I saw it on the Rez. The people who'd never been off the Rez were appalled to find out why I was appalled.
Click to expand...


The word "swastica" is sanscrit so yes, I think the origin is Hindu. However, I've seen lots of Buddhist temples but no Hindu ones so I can attest to its presence on the latter. 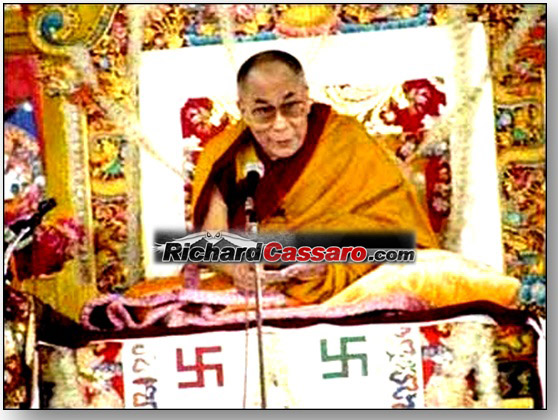 
The symbol appears in many different cultures. Here is a Jewish version found in many older Synagogues:

I've heard from Native Americans that it also represents the forces residing in the four directions and the four winds.

This is a photo of a Maidu basket maker from Central California dated about 1908:

NoName said:
That is very interesting. I thought he ripped it off from OTO (just like the two triangles and the double cross), but I guess it wasn't OTO's original idea either. Also, I recall hearing about the Sea Org symbol with the two branches had some Satanic sigificance with the number of leaves, but I can't be arsed to find dox right at the moment.
Click to expand...


I also liked that Bavatsky (knew Kabbalistic numerology) also published this in 1888...

Im convinced Hubbard was a practicing numerologist, it goes with Rons the I-wanna-be-Magnus credentials..

Oh, you know how Ron was referred to as "the old man"??

Scientology Kills, that IS it's business which is also a microcosm, a proof of concept thing for the new world order, which uses information control and covert hypnosis and kills, also to save the planet

The strangely true connection between Scientology, the Jet Propulsion Lab, and Occult Sorcery by Annalee Newitz

"One of the weirdest historical confluences you can imagine took place in Pasadena, California, in the 1940s. There, a darkly handsome young man and chemistry autodidact named Jack Parsons had just made a bundle of money by inventing solid rocket fuel and selling it to the military. He was part of a group of explosion-obsessed researchers at CalTech who founded the Jet Propulsion Laboratory (JPL), where recently the Martian Rovers were made. He was also a goddess-obsessed acolyte and generous financial supporter of the infamous Pagan leader, Aleister Crowley.

Parsons used his defense contract money to convert an old mansion into a group house whose residents included other Pagans, artists, scientists, and writers. One of his boarders was a charismatic science fiction author named L. Ron Hubbard, who became Parsons' greatest frenemy, participating in rituals of sex magic with the rocket scientist, sleeping with his girlfriend, and finally absconding with all his money. Here is the true story of how Scientology and JPL were both conceived by men under the sorcerer Crowley's mystical influence. " ...


SweetnessandLight said:
Yes, Arnie...it does help, and I am o.k. with learning more about the (REALLY) dark side and true origins of Scientology! Thank you. I never had to LIVE it like you did.

Can I just take a moment here to add that Aleister Crowley (seen below doing TR 0 ~ note how the TRs start with 0 and not 1, another magickal influence... ) really SQUIRRELED THE TECH when he wrote that "This is the whole of the law: Do what thou wilt". Do whatever the hell you want to do in life, (no matter who it hurts) is the kind of ruthless self-determinism that you "get" when you "Get IT" in EST, which was an offshoot of Scientology. I think Crowley's postulate of this as a "rule to live by" as a wannabe magus is the seminal thought behind Ron's creation of Scientology. I think Ron just copied and followed his hero...

"Do what thou wilt shall be the whole of the Law" is an exact quote from Crowley's best known and still read work "The Book of the Law" published in 1904. It wasn't even an original thought with him...from Wikipedia:

"This famous statement derives from several historic precedents, including that of François Rabelais in describing the rule of his Abbey of Thélème in Gargantua and Pantagruel: Fait ce que vouldras (Do what thou wilt), which was later used by the Hellfire Club established by Sir Francis Dashwood. It is also similar to the pagan proverb: An ye harm none, do what thou wilt; but the oldest known statement of a similar idea is by St. Augustine of Hippo: Love, and do what thou wilt."

The important point that I want to make about this is that Crowley's "The whole of the Law is 'Do what thou wilt'" is squirreled from, and morally, ethically and spiritually diametrically opposed to the spirit of the ancient pagan magical rede, which pre-dates Christianity and so, St. Augustine, from which this all comes, "and so it harm none, do what thou wilt..." St. Augustine's version is a slight reworking with a Christly "love one another" take on it.

That to me is very similar to the golden rule found in various ancient cultural traditions and teachings, same meaning and import. I think it's a key to success in spiritual practice, protection, and advancement for us as individuals and for our moral and social evolution as a species.

The core concept of Ron's Scientology creation opposes that.

The ruthless self determinism of Crowley's "This is the whole of the law, do what thou wilt" (invalidating all other religious and social systems of belief, moral values and social practice that promote loving kindness, and first do no harm to others kinds of values) is the core essence and foundational platform of Scientology. We see that being played out and demonstrated for us both historically while Ron was alive, and in real life right now by actions and abuses in the so-called "Church of Scientology" by it's current leadership.

The whole COS enterprise is rotten to the core and worse than worthless, harmful spiritually to people, because of this.
Click to expand...

Do you ever read what you wrote some time ago and say, Whoa!! That is a great thought?

I'm quoting myself here from an earlier post in this thread for the benefit of the Newbies and the more recent Lurkers who may not have seen this thread before.

I do think that knowing and understanding the real meaning and actual philosophical origins of Ron's "Scientology" is a very important step in healing and moving forward for Exes and those who care about them... It does show clear thinkers "where it all went wrong"...it WAS wrong from it's inception...

Newbies, please take the time to go back and read this entire thread, it contains some really good information, which is mostly hidden from public view, that you should know about Scientology.

I was at the Air and Space Museum a few years ago, the one out by Dulles Airport, there was new to me exhibit of JATO rockets. I realized I was looking at Jack Parson's design.

The only difference between a bomb and a solid propellant rocket is the burn rate. It was hard to find something that had sufficient energy to weight that also could be made to burn at a slow enough rate, Parsons breakthrough was using bitumen with perchlorate oxidizer.

The center of the sold propellant had a hollow shaft through it to control the burn rate, note this well: The cross section of that hole was a pentagram

The river bed by Gold Base is contaminated to this day with perchlorate. Parsons test site was in the valley following that river bed into the mountain behind gold base. The top of that mountain, covered with antennae, overlooking Gold Base is US Navy property."

I don't deny that occult significance attached to 30 April. On the other hand...

30 April is the eve of 1 May, Beltane. Beltane or 'bright fire' was the fire festival which marked the start of summer, or the date when hunting ended and the hills were given over to pastoral farming. It was the day when women and children closed down their winter homes and moved up to the summer grazings with all their cattle, taking fire with them in a pot.

The removal was marked by a huge bonfire, which got rid of all the rubbish accumulated during the winter. The rubbish included the bones of those who had died in the previous six months. (Surviving traditions apply only to men.) It was believed that when they were cremated their souls rose to heaven in the smoke. Heaven was seen as a vast hunting ground, a land of plenty. The bones of dogs and deer where also cremated and took their place in Heaven.

Apart from this belief there were no supernatural or superstitious beliefs attached to the festival.

On this other thread Veda wrote:

This depiction appears to be of Hubbard, with the sword, and of his Guardian Angel - shown but never explained. 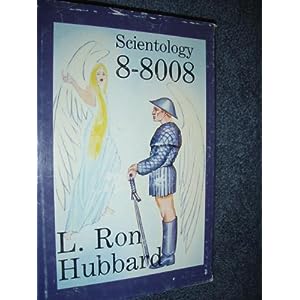 Aleister Crowley wrote of "the knowledge and conversation with one's Holy Guardian Angel" as an essential objective of Magic(k)al study and exercise.

Your HERO would have been an anti-Scientology Critic!
You must log in or register to reply here.