How many of you saw the Scientology ad that ran during the Oscars?

elwood said:
How many of you saw the Scientology ad that ran during the Oscars?
Click to expand...

Interesting. Not where I live.

Leland said:
Don't know if someone else linked to this....but ROFLOL....

May I ask, what is with the chain around John T.'s neck?

DeeAnna said:
May I ask, what is with the chain around John T.'s neck?
Click to expand...

It's John's high fashion replacement for a tie. He just loves the way it makes him look more manly: 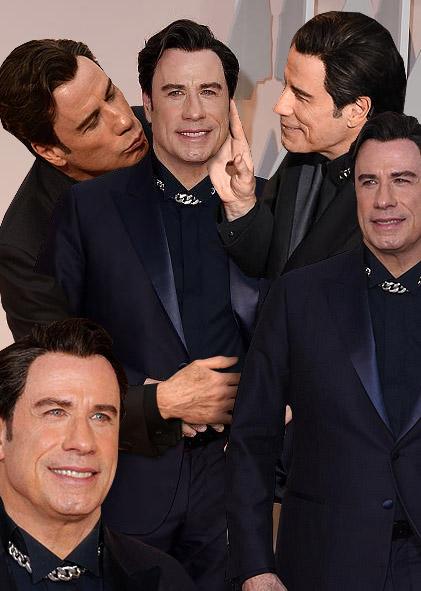 After getting Idina Menzel's name completely wrong in 2014 ("Adele Dazeem") the Grease star took the stage alongside the US singer to mock himself for his error.

He got her name right this time. But then began stoking and clutching her face in a creepy manner from which the Frozen star appeared to recoil.

Earlier on the red carpet Scarlett Johansson turned away in apparent disgust as Travolta reached a palm around her waist and appeared to rub her body.

They weren't the only ones feeling uncomfortable.

"Travolta leans in, grosses out" said the Boston Globe, while the Evening Standard dubbed it "the most awkward moment of the Oscars".

Creepy fails... on more than one level. What a difference this is, to that photo of him posing with some guy in the gym, looking really CHEERFUL and happy, with shorter hair, and naturally balding head. Say what you want, I say that "scandalous" snapshot was a huge WIN for him and how I'd like to remember him.

Well Slappy you might as well shut Celebrity Center in LA down 'cuz your boy JT just drove the final nail in the coffin.

Do ya still have classes for up and coming actors there anymore? It's over baby. O-V-E-R.

Oh and JT, note how Neil Patrick Harris has a successful career...is well respected...and out of the closet! (Pssssst....it's 2015 now)

I can be done. Then you don't have to pretend to be a hetero stud. It doesn't work for ya. But you're deluded. A Scientologist.
D

"John Travolta looked like a Liberace animatron. Strange movement. And what’s with all the weird Joe-Biden-creepy-uncle-touching all of a sudden?"

I got the impression that he had one too many martoonies before going to the Oscars, him being all handsy and creepy. Drunk people can get like that. (I know that from personal experience. lol) Either that or all that auditing has really messed him up.

I would be grossed out and offended if someone icky like him tried that shit on me.

Operating DB said:
I got the impression that he had one too many martoonies before going to the Oscars, him being all handsy and creepy. Drunk people can get like that. (I know that from personal experience. lol)

Either that or all that auditing has really messed him up.
Click to expand...

Gotta be the auditing...Too many martoonies (ahem, having imbibed a few here and there, once or twice ) will sure enough make you all handsy but, the creepy ain't the booze.

Between his "performance" last year and his creep factor this year, I hope not to see him as a presenter next year.

Actually, it's been a mystery to me why he was asked to appear either last year or this year. He has not had a hit movie in a long time. And he's had all those smarmy accusations from various people ranging from a hired masseur to just some poor guy who encountered J.T. in the sauna room of his health club.

If the Academy wants to get a once famous, now-faded star, how about Kevin Costner from that same era? He's still working regularly, doing smaller parts and doing them well. And there are plenty of others whose star has faded but they are still out there acting.

I do appreciate Travolta "jumping the shark" though. His timing could not have been better.

AnonyMary said:
Very weird You can see the video of it here.

It's here as well along with more info
John Travolta explains his grab of Idina Menzel’s chin at Oscars 2015 on ‘Jimmy Kimmel Live’
http://www.nydailynews.com/entertai...ng-idina-menzel-chin-oscars-article-1.2125712

First he went after Scarlette 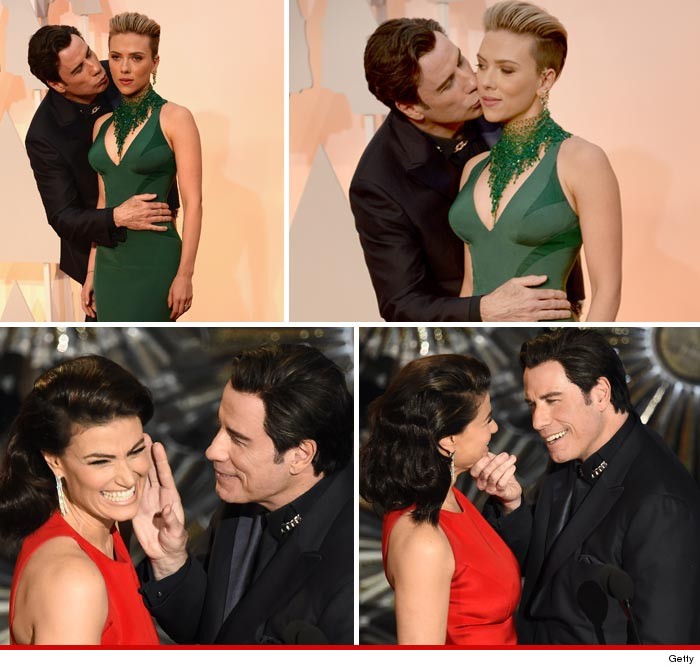 Ah...he's Italian! They kiss, they touch your face...no big deal. It's a cultural norm for them to be "a little in your face". In my experience, anyway!

Intentionally Blank said:
Interesting. Not where I live.
Click to expand...

It ran in the Austin area.

Looks a bit thinner, though, maybe.

Well. At least it proves conclusively that he is perfectly straight.

There's nothing odd about a painted, once gorgeous, but no longer, man in fake hair tenderly groping a couple of females while badly acting lust. Some guys just improve with age but not JT. The more he tries the more obvious the hair loss, and weight gain become.

HAVE FUN: treasure trove of win !

Does this Blind Item about a SEC investigation of a Ponzi scheme concern Scientology?