Why Boredom is a Barrier to Study Phenomena

[h=3]Why boredom is a barrier to study phenomena[/h]
This thread is an addendum to Insidious Enslavement :Study Technology .http://mbnest.blogspot.com/2015/01/insidious-enslavement-study-technology.html

I found this today and realized why Hubbard had bored students stop and search desperately for "Mus" to "clear ".

He knew that students who are bored can memorize info they see as unrelated to them and then repeat it back to pass an exam and then forget it - he discusses this at length in the Student Hat course . He called it making a pattern unrelated to you .

I did not get the significance for how this related to his method of mind control until just now . I found this and realized what he knew and did about it . 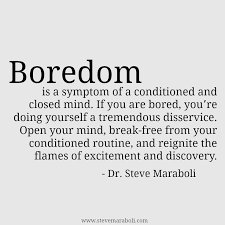 He realized that he could not implant commands hypnotically into a bored mind as it would not have the focused attention he needed for his "study tech " to work . It would end up like regular schools with bored students memorizing things and then passing exams and largely forgetting the materials they studied . He could never control people as he wanted in that manner . But he had a way around this - he labeled all boredom on course as coming from Mus which prompts a mad desperate hunt for them and confusion on what the student is sure they understand but because they are told boredom stems always from Mus they are conflicted over how they both understand and can be bored . The contradiction causes confusion and cognitive dissonance . This increases over time and the student then gets anxiety on top of the dissonance and Hubbard knew a confused and anxious student can to alleviate the confusion take in whatever they are told as hypnotic commands effectively implanting them . It is a simple variation on his con induce a confusion strongly via a lie ( that boredom is caused by the fictional Mu phenomena ) then alleviate the confusion by directing attention off the contradiction and onto a part of Hubbard's doctrine that is studied right after the "MU" is "cleared ".

It is a simple method mixed with others and the evidence of the hypnosis is also labeled as barriers to study phenomena further confusing the student and inducing more anxiety about study and masking the hypnosis and thought reform . I thought the boredom was just a sign of hypnosis but I was off . The boredom is a sign the hypnosis is not working as attention is not being controlled as Hubbard needs it to so he redirects it in a confusing and anxiety producing manner . This seems far more accurate to me - now that I have learned a little more about boredom and how your mind is closed to manipulation when bored . This is why politicians know they lose an audience if it is bored and lawyers say juries pick the lawyer that is less boring - he can persuade them better .
Last edited: Mar 4, 2015

I remember stifling yawns in the course room and also thinking "this is stupid to think yawning means MU" but a yawn was a sure fire way to get the sup to come running, result....stifle the yawn.

Anyone else remember stifling yawns?

Yeah , we yawn when we are bored and then we are not focusing our attention . When we are bored we tend to disregard what we hear as unimportant and that is the opposite of being receptive to persuasion . Boring people are not good at persuading others as your mind almost shuts down in boredom . Animals when bored also use less energy and just laze around . We, like them do not use energy and just take in the minimum info and do the minimum to get through or away from boring things and people . Hubbard knew he had to find a way around this and did with study tech , it makes boredom shift to confusion and anxiety which are much more vulnerable to persuasion .

WildKat said:
I remember stifling yawns in the course room and also thinking "this is stupid to think yawning means MU" but a yawn was a sure fire way to get the sup to come running, result....stifle the yawn.

Oh yeah... Definitely do not miss hiding yawns to keep from being hounded by a sup at all. Something else I'm glad to never do again is those insanely detailed clay demos of abstract concepts. God I hated doing those!

I do still look up unknown words but just like a normal person would and you know what - that works just fine for me.

Scientology 411 said:
Oh yeah... Definitely do not miss hiding yawns to keep from being hounded by a sup at all. Something else I'm glad to never do again is those insanely detailed clay demos of abstract concepts. God I hated doing those!

I do still look up unknown words but just like a normal person would and you know what - that works just fine for me.
Click to expand...

Sometimes I wanted to grab my crotch and say, "Clay demo this bitch!"

Might be good to restate the title of thread...?!?

Boredom IS a study 'phenomena', and not a barrier to "study phenomena"...

I see what your trying to say but it makes no sense after your title of it.

I do wish though, that my phenomenal study efforts into said topic had a more phenomenal consequence.

It just seems to have trapped me into reading this message board and observing the phenomenal effects it has had on those who have also done so. My choice.

I'm old and this is now my only worthy entertainment -sad

When my daughter went from a private Montessori school to public school she had this problem.
Her grades went on a roller-coaster up and down.
I had read that this is a common experience for children going from private to public school.
In 7th grade in a public school she told me, "Dad, they are teaching stuff that I learned in 3rd grade."
You must log in or register to reply here.

Why Scientologists Are So Close Minded and Certain