"It really doesn't set forth any new law. In fact, it restates existing law," said Mat Staver, chairman of Orlando-based Liberty Counsel, which fights for religious civil rights. Still, he said, "Having this in the statute will be very beneficial. Schools don't want to be sued. They've got better things to do. And people don't want their religious rights violated."

But that's the very concern of others who say the law will complicate an issue that needed no clarification.

David Barkey, religious freedom counsel and southeastern area counsel for the Anti-Defamation League, suggested the Legislature took one step beyond the Constitution in requiring school districts to establish a policy that provides a forum for student religious expression. Districts were given the option to do so five years ago with an "inspirational messages" law, and none acted.

Barkey also observed that the law could open the door to unfettered religious commentary in the public schools. He pointed to the first line of the law after the section name: "A school district may not discriminate against a student, parent, or school personnel on the basis of a religious viewpoint or religious expression."

If a school cannot discriminate against any type of religious expression, he said, it could result in a classroom teacher who ad libs controversial views into a lesson to children who have no recourse but to listen.

"There are teachers who do teach science but who don't believe in evolution," Haught said. "This could embolden them to say, 'The law is on my side' " and start covering topics such as creationism or intelligent design in their classes.

The law does not speak directly to that issue.

He noted, too, that the new law allows students to express their viewpoints in their assignments, and that they will be graded in accordance with the standards. But he wondered whether a grade could be considered discrimination if the teacher challenges the student's views and suggests revisions.

"What's the consequence of that?" Haught asked.

Barkey also observed the sweep of the measure, along with a seeming lack of limits.

"I don't think the unintended consequences were well thought out," he said. "I feel sorry for the school board attorneys who have to deal with this."

They're already girding for the possibilities.

The Pasco County School District, for instance, has Neola — the firm that updates its policy manual quarterly — examining revisions, board attorney Dennis Alfonso said. For his own part, Alfonso added, he will be looking at whether districts can be "more restrictive than the law."

Lisa Wolf, a spokeswoman for the Pinellas County school system, said the district's lawyers are in a "wait and see mode" to determine whether the law raises any constitutional concerns. The administration, meanwhile, is awaiting a model policy on the student forum from the Florida Department of Education before developing its own new rules.

So, too, is the Hillsborough County School District, which then will train principals and teachers.

"The rest of it, we already have policies and practices in place," Wolf said.

Blum, the social studies specialist, sounded confident that teachers, at least, will handle it all in stride.

"If an issue would arise, we would have to deal with it case by case," he said. "I don't know that any of this changes the work that social studies teachers are doing."

Haught agreed that for many educators, the new law likely won't be a big deal.

"But if it happens in one classroom," he said, "it's enough." 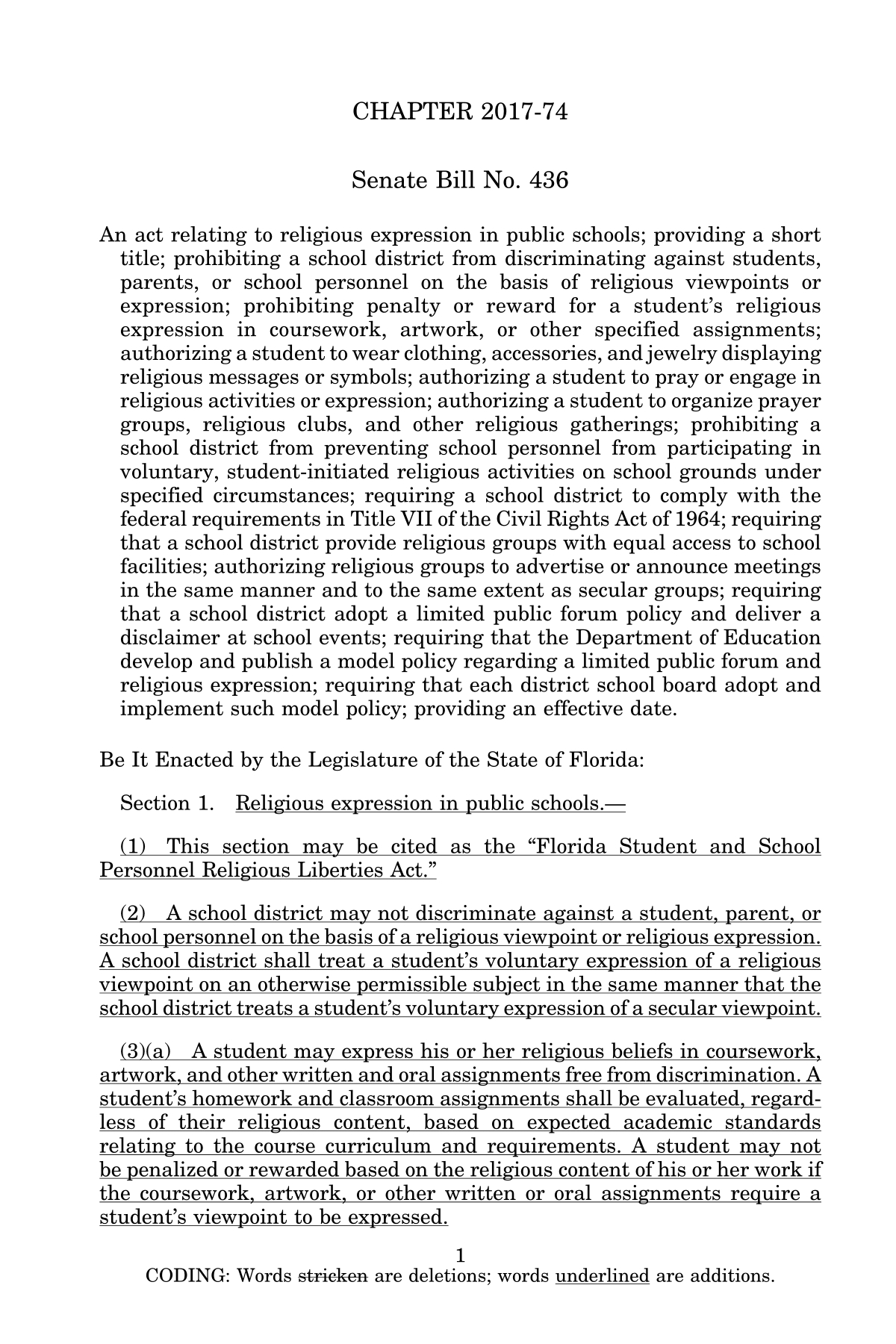 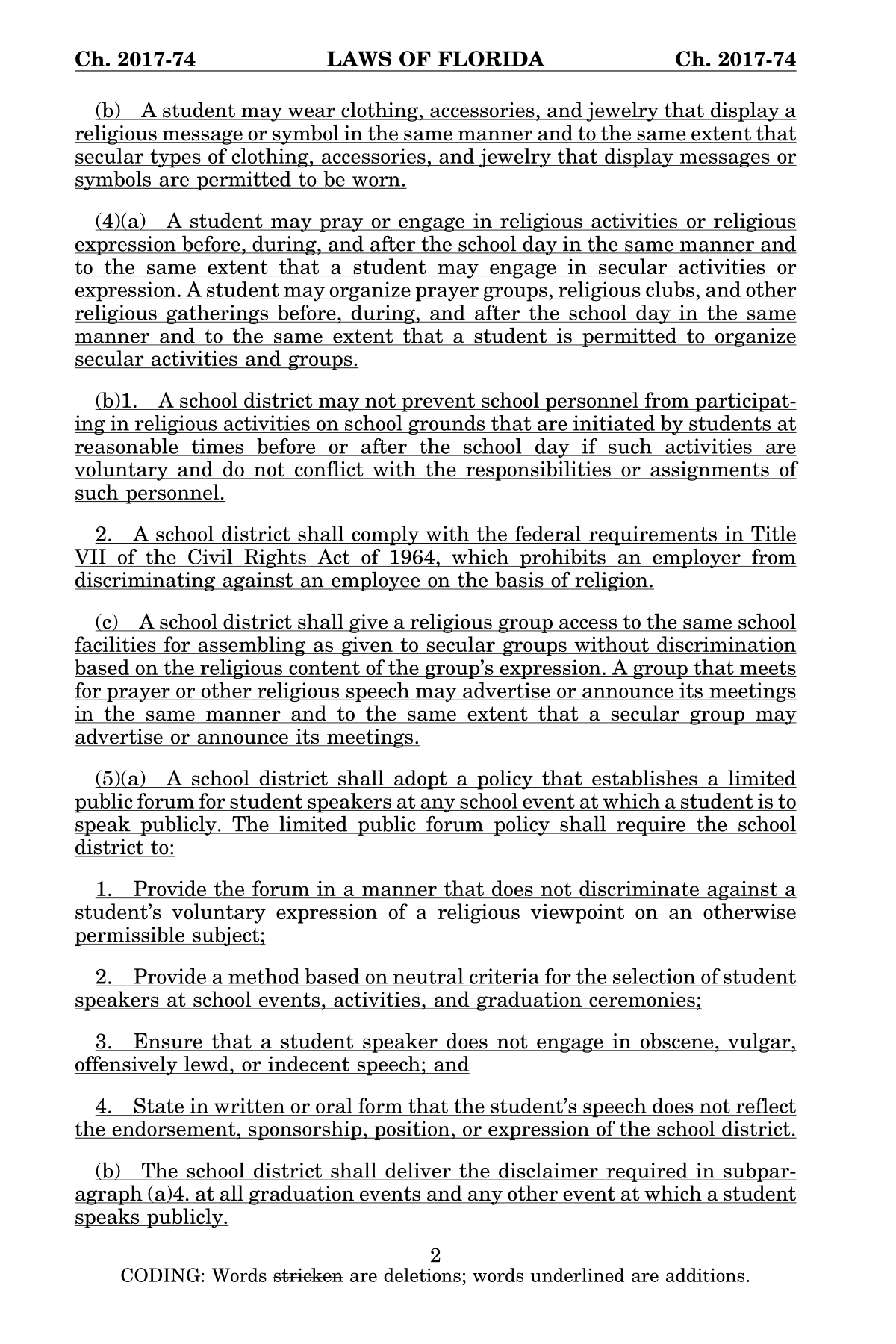 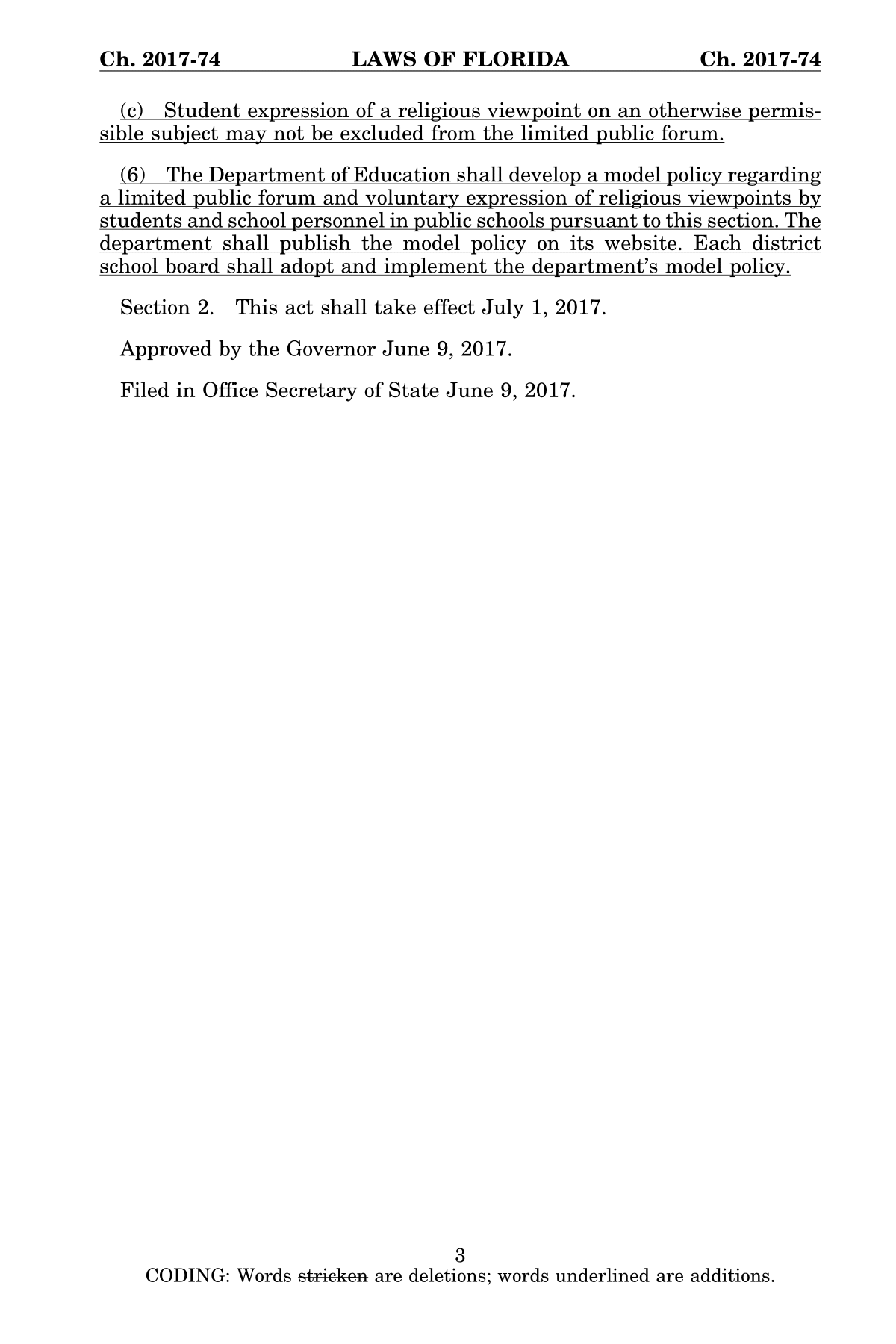 What an utterly malignant joke of oppression upon liberty and freedom from oppression. Cognitive dissonance is the trap from which it is illegal to counter or escape from.

To put religious freedom above and out of reach of counter expression is absurd and what drives people into slavery. So now, any religion can 'express' its anti-social brainwashing and preaching of violence, and nw it has become illegal to speak or act out against it.

Fair Game, Jihad, are waiting at the gates. The trojan horse has been built and powered by the concept of Slavery = Freedom and Dictatorship =Liberty, kindness = protecting the oppressor to make you say nothing about their oppression.

The Christian Taliban is alive and well and will make every attempt to force its beliefs down everyone's throat.

"A student my express his or her religious beliefs in coursework, artwork and other written and oral assignments free from discrimination"
Click to expand...

So in a history or anthropology class, if the students are learning about Cro-magnon or other human ancestors, they student can say on a test that man was created by god 6,000 years ago and those skeletons are bogus. And that will be a correct answer.

Or better yet, a scio can bring in the book 'The History of Man' and tell everyone about clams and weepers and the Piltdown man...you know the TRUE history of man.
You must log in or register to reply here.

School District Allows Scholarships from Scientology but not from Atheists