NOTE: While I started posting about this specific topic in the general Joy Villa thread, I made the executive decision that this important development deserved its own thread for the reasons of increased visibility and enhanced Google indexing. I may get in trouble for this but, heh, I like to live dangerously. 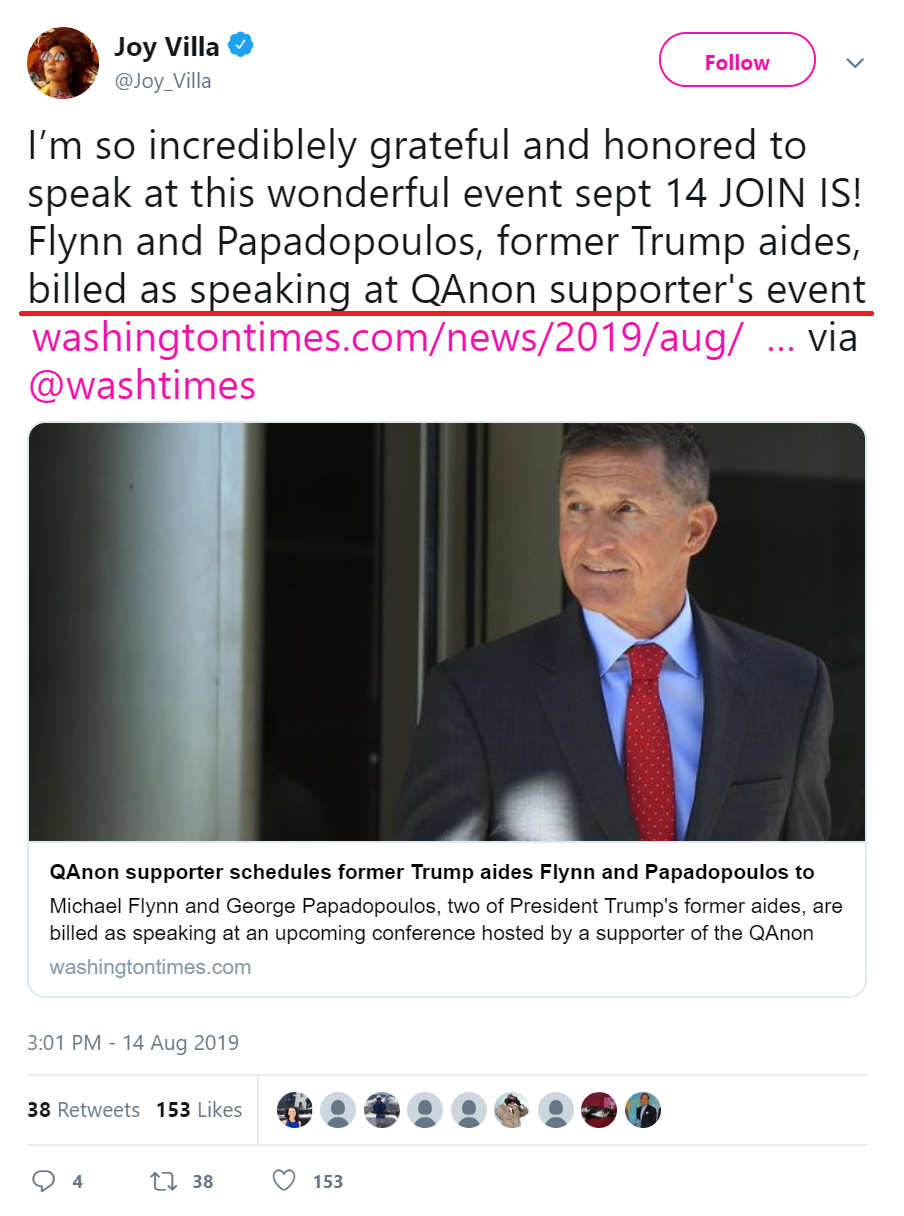 Trump, the GOP, and Conservatives

The transformation of the GOP and the conservative movement has long been clear, but it has been especially clear, I think, in recent days. Yesterday, Trump retweeted Joy Villa. She had tweeted out an article from Fox Business, whose headline was “This is what the ‘new conservative movement’ looks like.” It showed a picture of Ms. Villa herself. She is a singer-songwriter and a Trump booster. At CPAC this year, she sported eye-catching earrings: Q earrings.

“Q” stands for “QAnon,” which is a movement with a startling contention: President Trump and the U.S. military are engaged in a glorious shadow war against a global pedophile cult, in which top U.S. Democrats figure prominently.

One of the leaders of this movement is a radio personality named Michael Lebron, also known as “Lionel.” He is a contributor to RT, the Kremlin propaganda outlet. Last year, he had his picture taken with President Trump in the Oval Office. Meeting Trump, he said, was “an awesome transcendental moment.”

The Q movement apparently grew out of “Pizzagate,” a conspiracy theory that, again, involves pedophilia. The contention is that top Democrats were, or are, running a child-sex ring out of a D.C. pizzeria. A man from North Carolina, under the influence of the theory, drove to D.C. and shot up the pizzeria. Fortunately, no one was hurt.

One of the promoters of Pizzagate has just been named a Lincoln Fellow at the Claremont Institute. Mona Charen and Jonah Goldberg both wrote about this last week, with great pain. (Mona’s column is here, and to sign up for Jonah’s G-File, go here.)

The website of the Digital Soldiers Conference displays the "Q" flag and shows Joy Villa as a speaker. 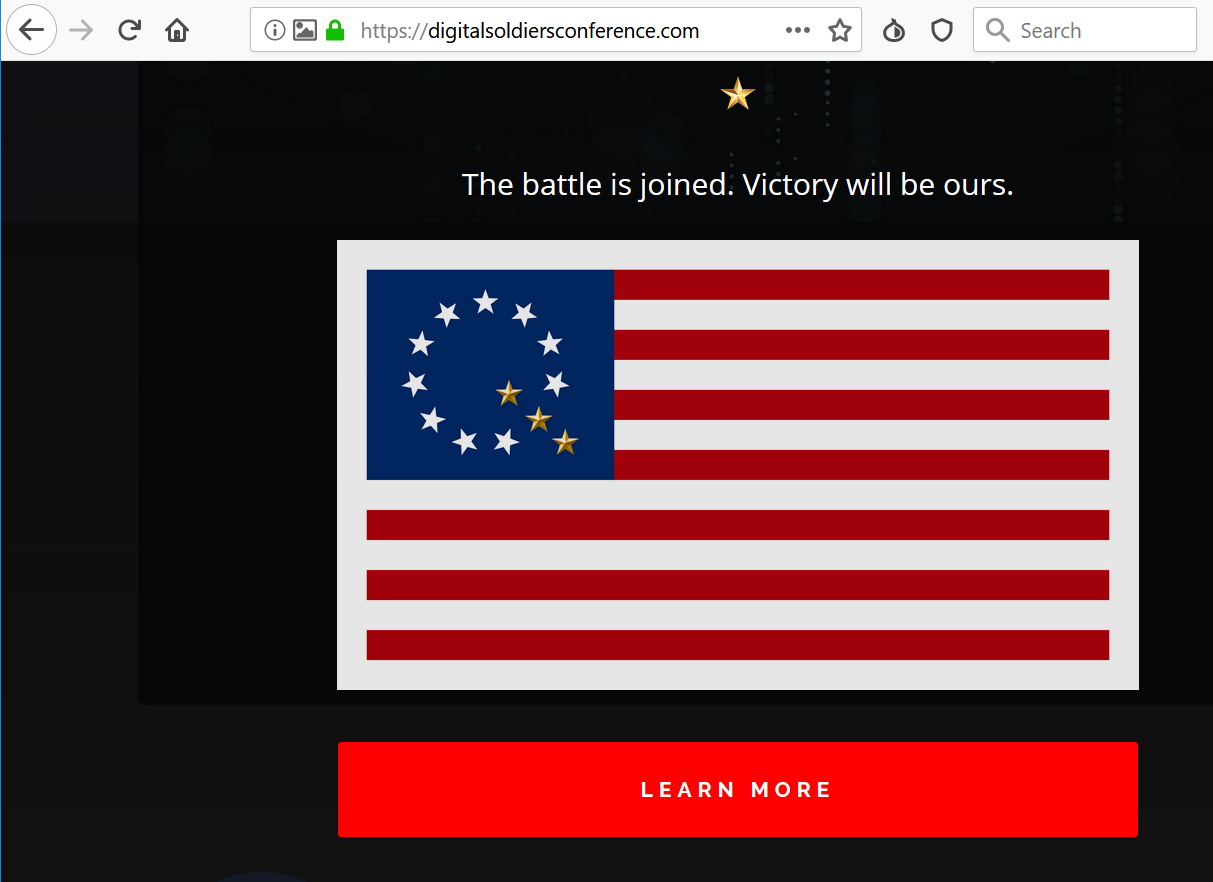 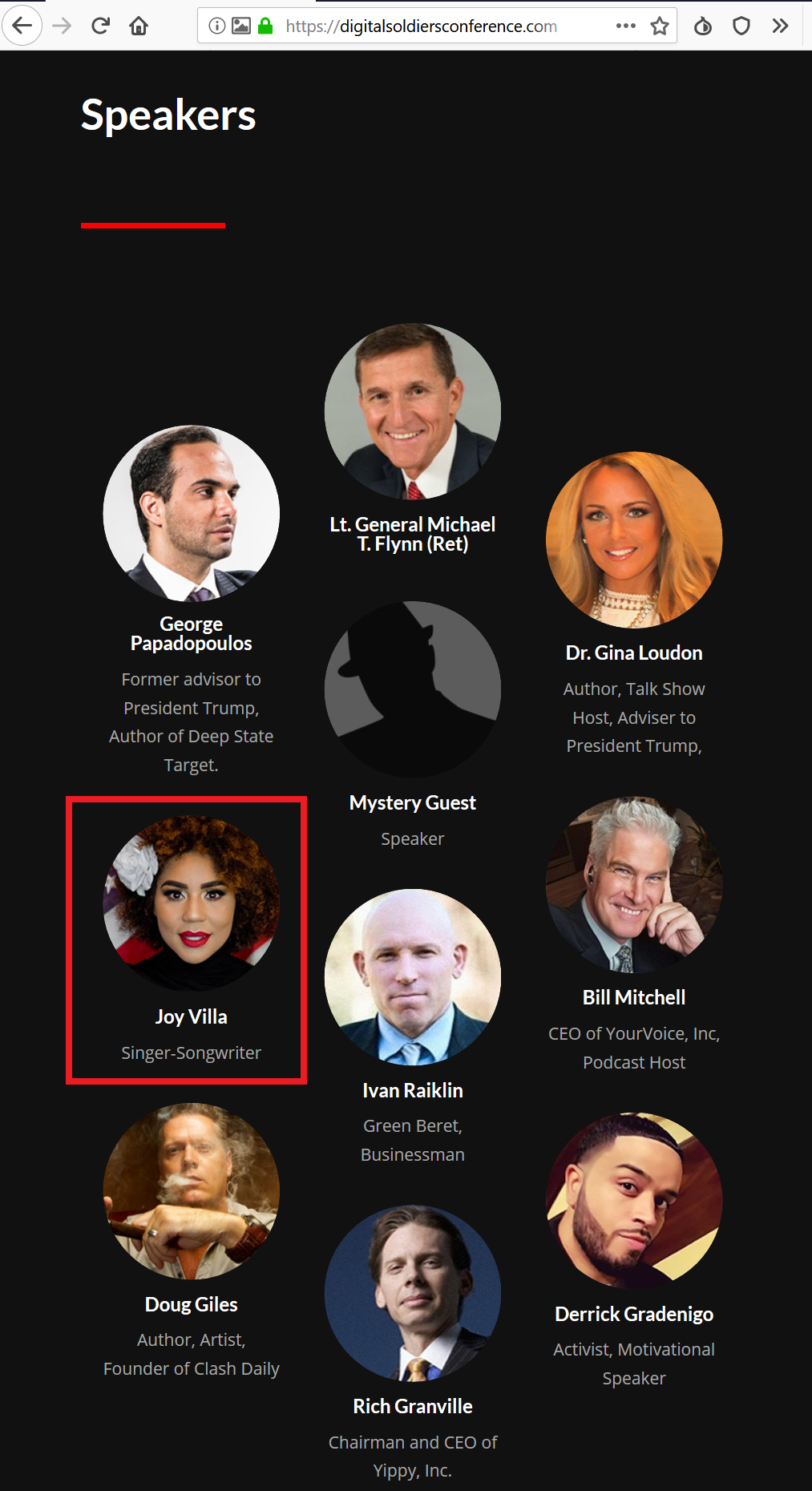 The website of the Digital Soldiers Conference also shows tickets are only $99 to $2,500. 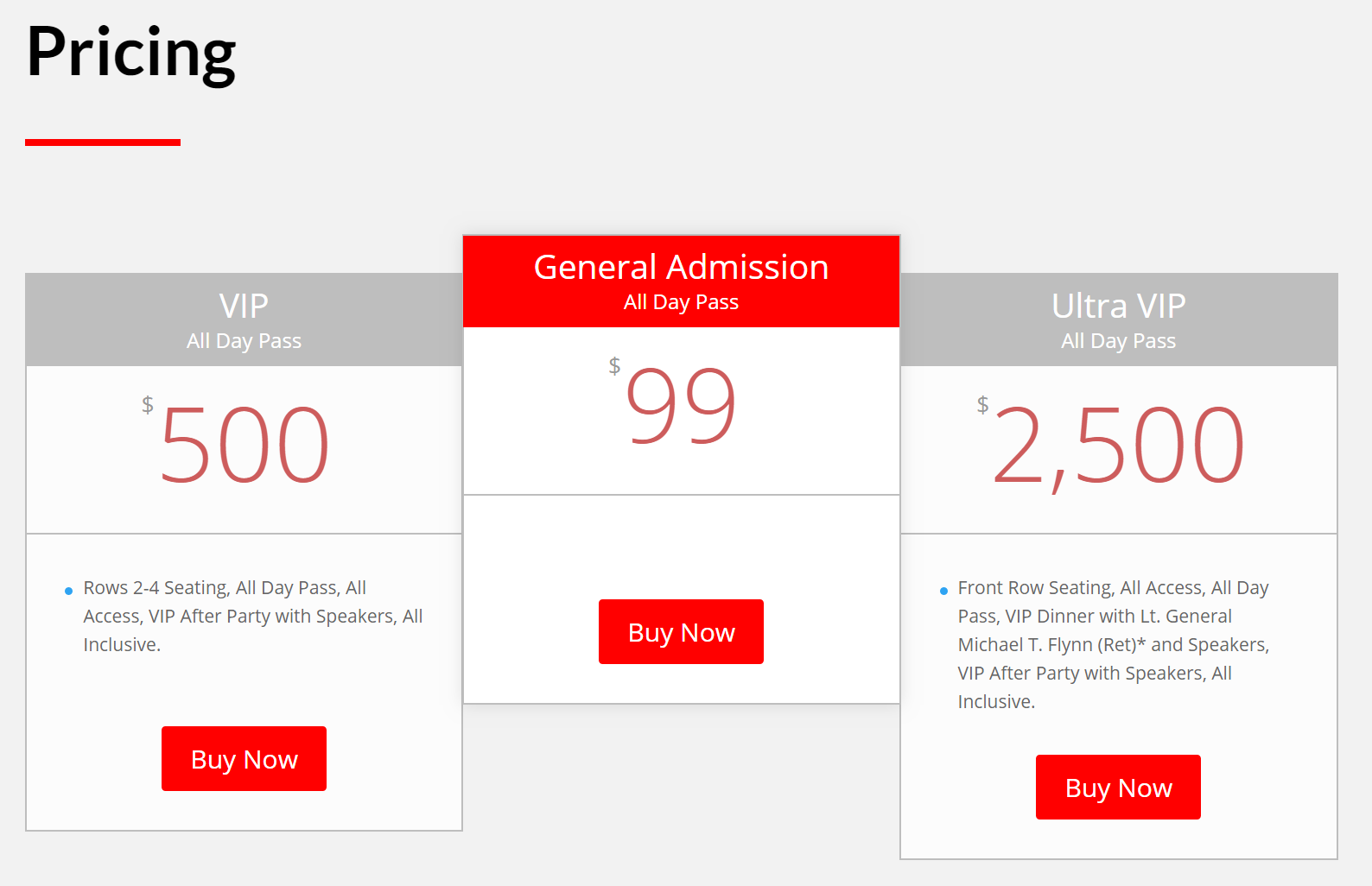 As linked in Joy Vlla's tweet above, the Washington Times noted Joy Villa's participation in the event.

Other speakers scheduled to appear at the conference include conservative personalities Joy Villa and Bill Mitchell, according to the event’s website.

On the other side of the political spectrum, Joy Villa's speaking at the event made Mother Jones.

Other featured speakers include Bill Mitchell, an online broadcaster and conspiracy theorist; singer and Trump backer Joy Villa; and a “mystery guest.” 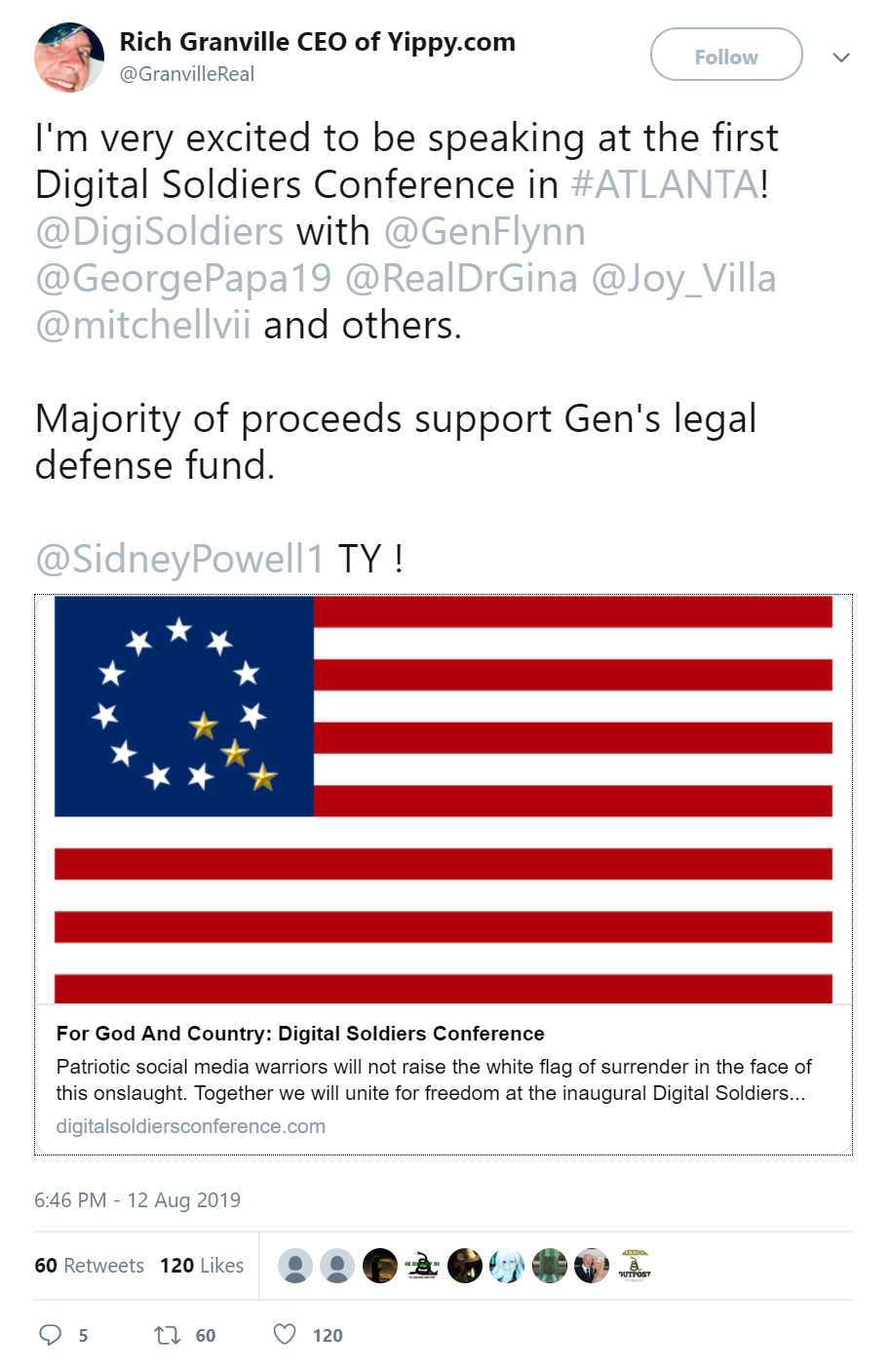 Travis View, co-host of the QAnon Anonymous podcast, refers to Joy Villa as a "QAnon pusher[]." 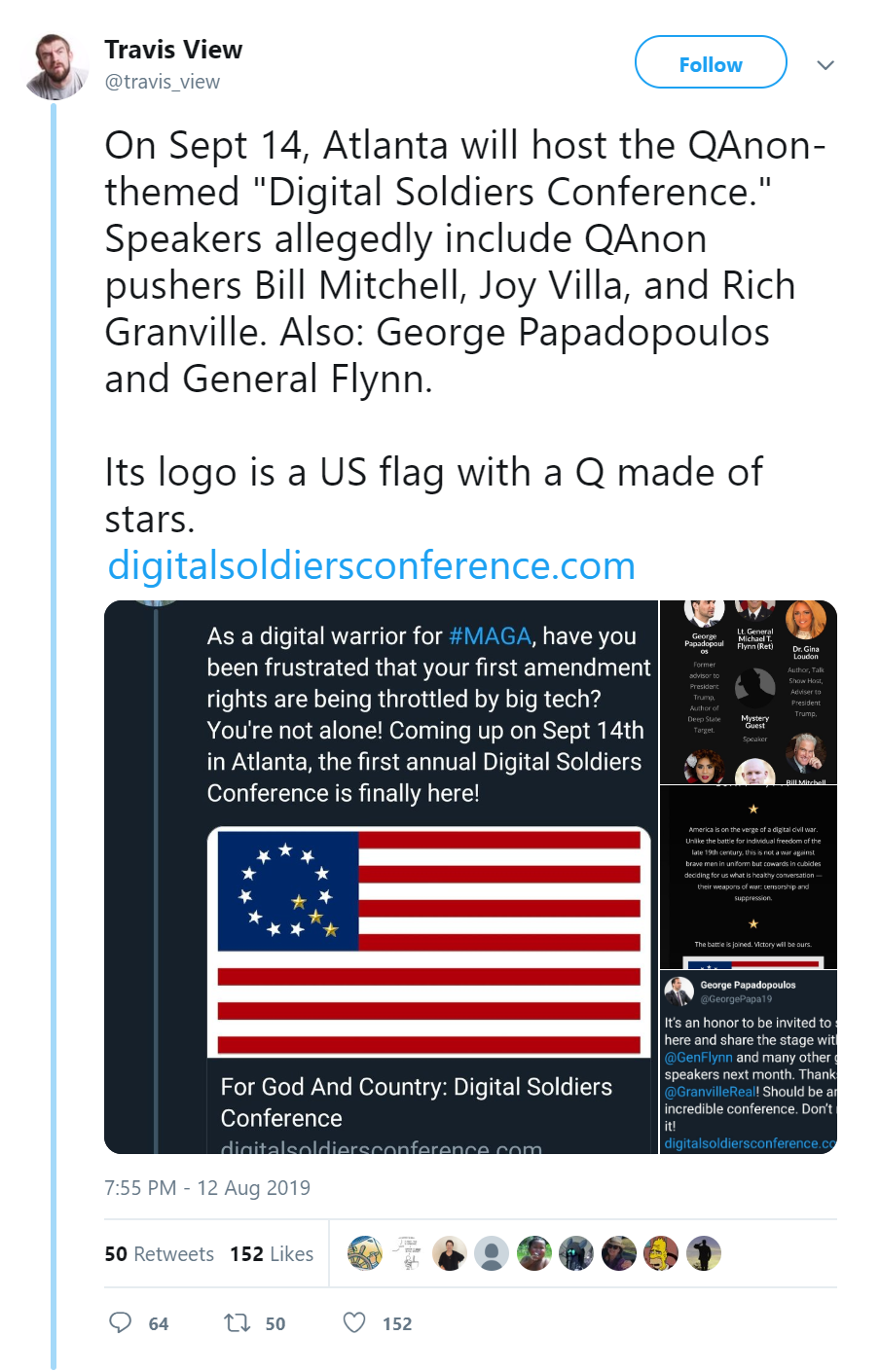 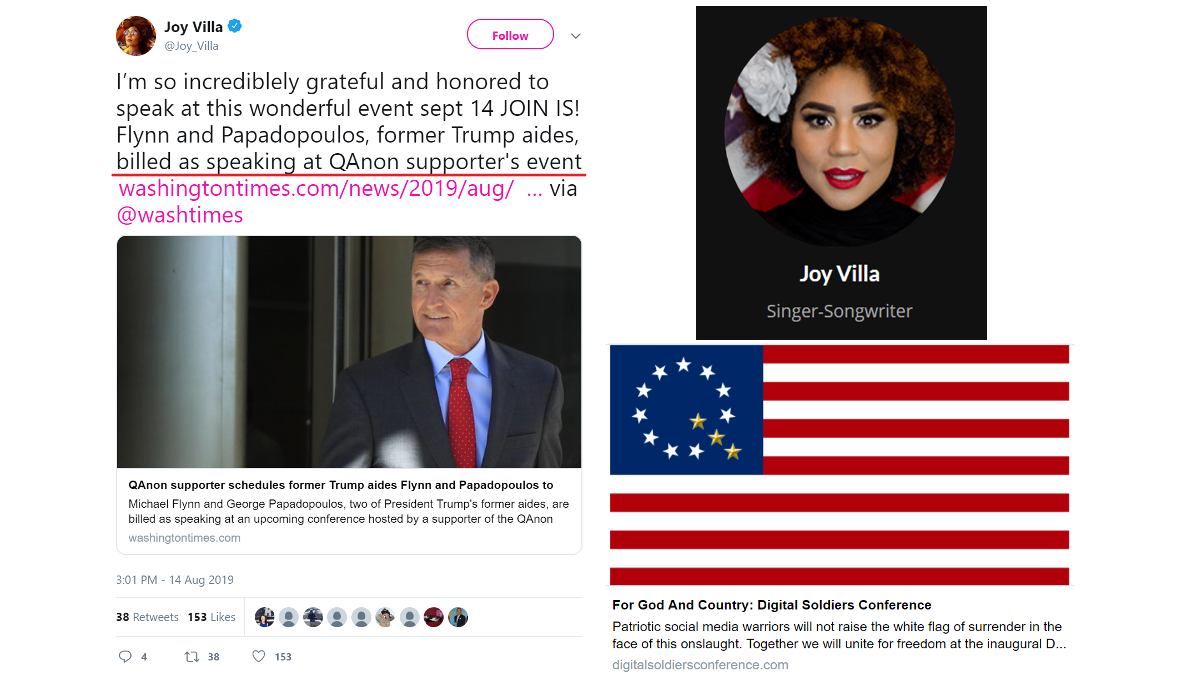 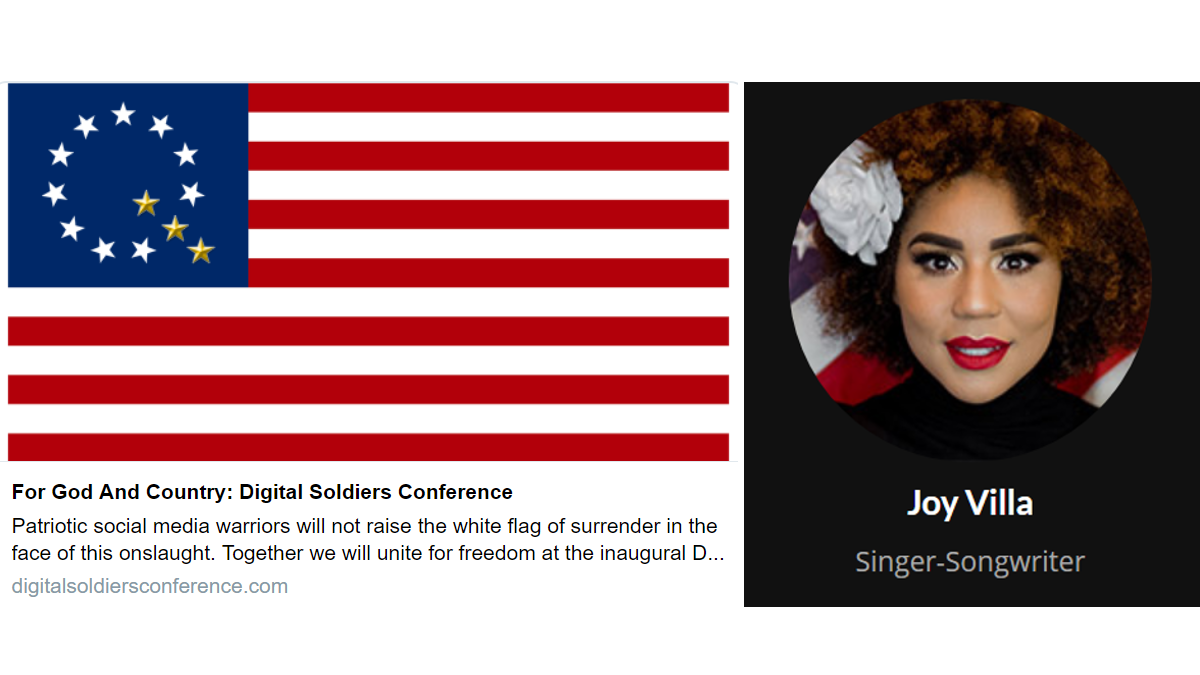 I haven't been following the QAnon trip at all, but bump into it every now and then while seeing other commentary.

It seems pretty clear that QAnon is controlled opposition, the purpose being to co-opt not so much the "conservative movement" (which doesn't exist as an organized group) but to attract conservative support. Then, I would guess shortly before the 2020 US elections, to make a big MSM deal of invalidating the whole Q trip, thereby tarring with the same brush all conservative thought.

As always, I'm not posting this for any political purpose. I'm posting this for four Scientology related reasons. First, as previously noted, Joy Villa was recently the cover story of a special edition of the Epoch Times. Second, Villa is also going to be a speaker at a QAnon supporters event (her words) in September. Third, we all know Villa and the Church of Scientology are trying to ingratiate themselves with the Trump administration and the MAGA community. Fourth, this makes one wonder whether acting through Villa Scientology will: (1) influence and safe point the Epoch Times and its large social media following; and then (2) be able for further ingratiate themselves with the Trump administration and the MAGA community using Villa and the Epoch Times. I had no idea the Epoch Times was that influential.

NBC News: Trump, QAnon and an impending judgment day: Behind the Facebook-fueled rise of The Epoch Times 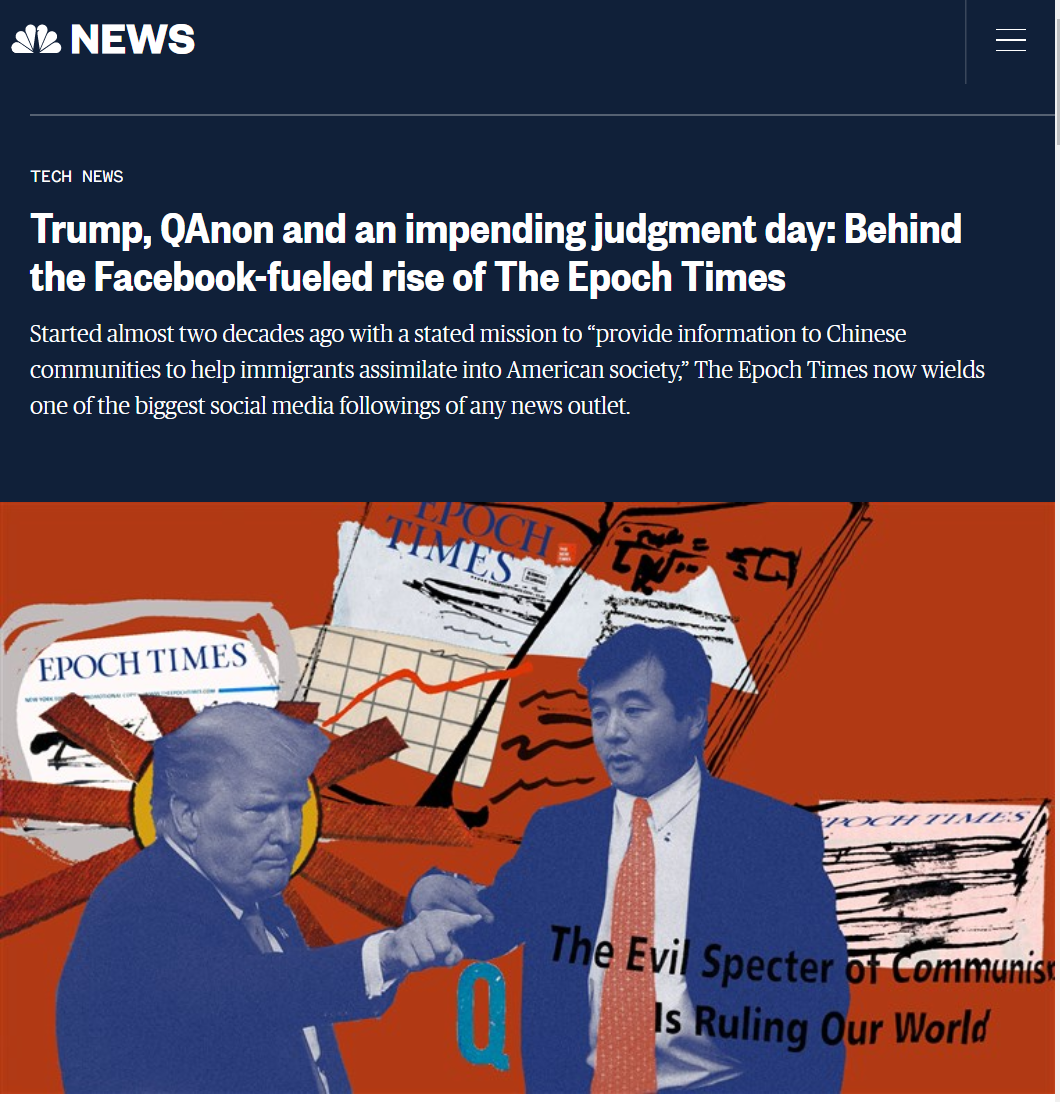 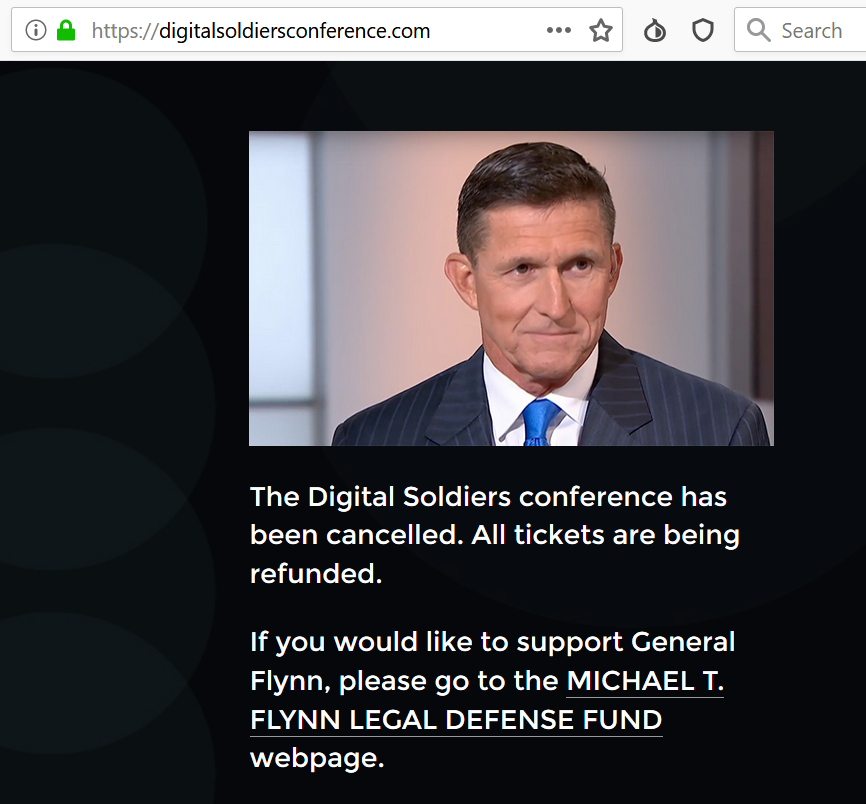 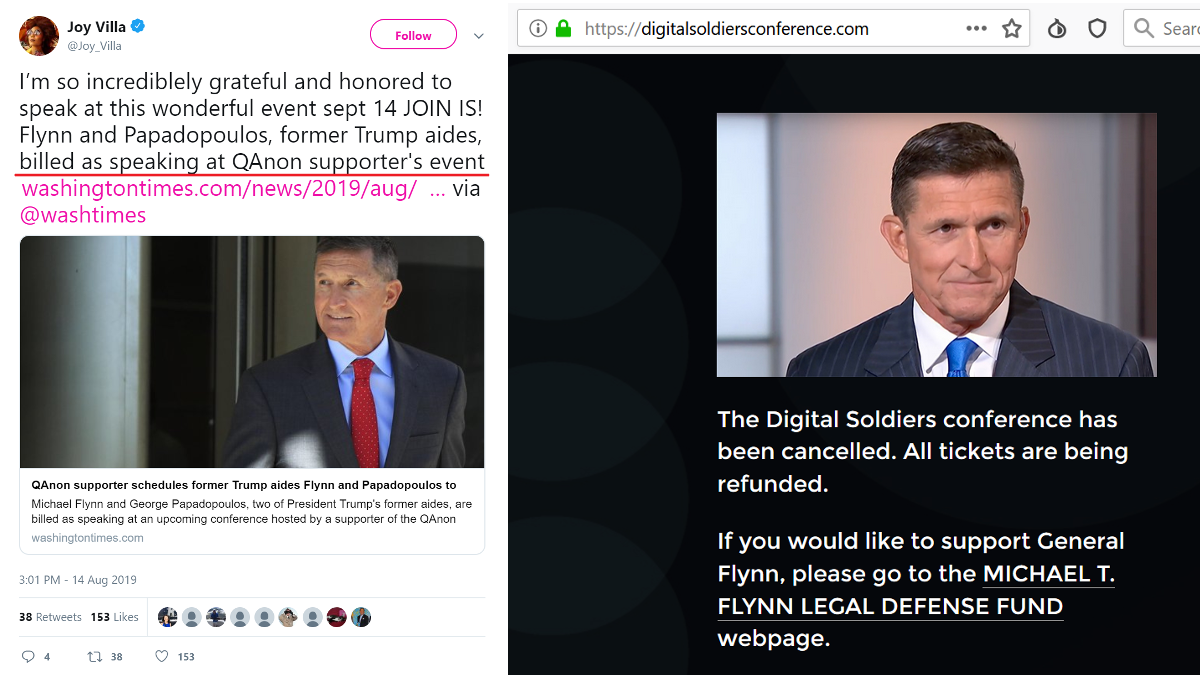 
The event was cancelled after General Flynn, the beneficiary of the event, pulled out.

He decided not to attend after a Mother Jones story revealed the event’s ties to the conspiracy theory.

Michael Flynn, President Donald Trump’s former national security adviser, pulled out of a fundraiser for his legal defense fund that was organized by a supporter of the bizarre conspiracy theory known as QAnon, after Mother Jones reported on the event’s connection to the fringe group.

Flynn’s attorney, Sidney Powell, tweeted Saturday that “given recent reports and comments,” Flynn, a retired Army lieutenant general and former head of the Defense Intelligence Agency, would not be participating “in a conference in Atlanta on Sept 14.” The conference referenced is the Digital Soldiers Conference, a one-day event that promises to prepare attendees to battle against “censorship and oppression” at the hands of “Big Tech Socialists” who have been “de-platforming those who dare violate their liberal sensitivities.” The event’s proceeds are to benefit a fund raising money for Flynn’s legal defense, according to the conference website.

Dulloldfart said:
I haven't been following the QAnon trip at all, but bump into it every now and then while seeing other commentary.

It seems pretty clear that QAnon is controlled opposition, the purpose being to co-opt not so much the "conservative movement" (which doesn't exist as an organized group) but to attract conservative support. Then, I would guess shortly before the 2020 US elections, to make a big MSM deal of invalidating the whole Q trip, thereby tarring with the same brush all conservative thought.


I'm pretty well-read into the Q stuff for some time and can say it most certainly is not 'controlled opposition'. It began as a troll on 4chan and very rapidly some conniving individuals figured they could make money on it (through 'decoding' accounts on youtube or elsewhere funded through Patreon). It has since been taken up by more trolls, but also spread by Russian bots and such.

The MSM has already 'invalidated' it with numerous articles naming who was likely involved in helping spawn it. There have also been slip-ups by some of the decoders in video chats in which they indicate they are involved in creating the 'drops'.

As most of the voting public has no keen interest in it (except for some laughs), and no appreciable number of people would change their votes due to it, your theory is simply not sustainable.
You must log in or register to reply here.